Chef Santini had never cooked professionally prior to marrying into a restaurant family and beginning her culinary career at Dal Pescatore’s kitchen in 1974. Here she began her training with her new husband’s grandmother Teresa. Twenty-two years later, she was the first Italian woman to be awarded three Michelin stars. Today she works at the restaurant with her husband Antonio, who manages the restaurant’s front of house team, as well as their sons Alberto and Giovanni.

Nadia met Antonio whilst studying at university in Milan. After a honeymoon spent researching renowned culinary establishments in France, Nadia and Antonio returned to Dal Pescatore to implement their learning’s at the restaurant, which would celebrate its 50thanniversary the following year (1975). Nadia and Antonio proposed changes to the kitchen layout and the re-organisation of the family team,which not only included Antonio’s grandmother but also his father, Giovanni and his mother, Bruna who were running the restaurant at the time.

At the helm of the culinary dynasty that is the Santini family, Nadia Santini’s cheffing expertise has lifted the restaurant to the highest of heights but the values installed in her by Teresa Santini have always remained constant. Nadia and her family describe their cuisine as full of character and charm; courteous, peaceful, a never ending journey of exploration and discovery. Ultimately, she wishes to provide each diner with an enriching culinary experience. As chef-owner Angela Hartnett of the Michelin starred Italian restaurant Murano in London explains:

“Nadia Santini is brilliant. Dal Pescatore is a fantastic restaurant, so relaxed and natural for a three star that you feel like you have been invited into their home.”

The Veuve Clicquot World’s Best Female Chef award celebrates the work of an exceptional female chef whose cooking excites the toughest of critics of the world, 936 of whom voted in this category.

The award is inspired by the life and achievements of Madame Clicquot, who nearly 200 years ago, set the standard for women in business. The winner reflects Madame Clicquot’s attributes of innovation, creativity and determination.

Winning the Veuve Cliquot World’s Best Female Chef award puts Nadia Santini in extremely good company; previous winners include Elena Arzak, of renowned San Sebastian institution Arzak andAnne-Sophie Pic, of Maison Pic in Valence, France, the inaugural winner of the award, who is delighted that Santini is to be recognised. She comments:

“I have a great admiration for Nadia Santini. I appreciate her so much for her humility and her generosity. She is a role-model. I have identified myself tremendously with her: with her simplicity, her values, her honesty and emotional sensitivity.”

In the past 10 years, Dal Pescatore has appeared eight times on The World’s 50 Best Restaurants list. This year’s results will be announced at the annual awards ceremony, held in London’s Guildhall

on 29thApril and published live onwww.theworlds50best.com 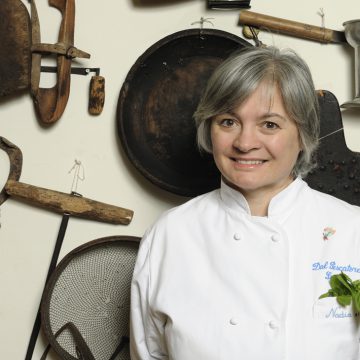 Chef Nadia Santini’s restaurant,Dal Pescatore,is located in thehamletofCanneto sull’OglioinLombardy, Italy.The restaurant was originally opened by Santini’s husband’s great grandparents in the 1910s. Nadia took over the running of the restaurant alongside her husband in 1974, when she began her culinary training with her new husband’s grandmother Teresa.In 1996, the restaurant was awarded threeMichelin stars,with Santini 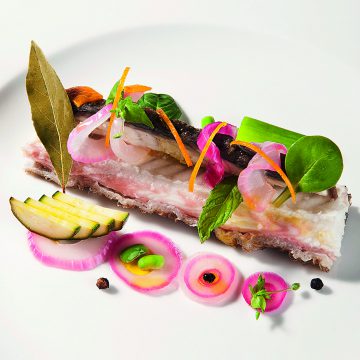 Something to impress, Nadia Santini gives you a recipe of marinated eel with red onions from tropea…Yum! 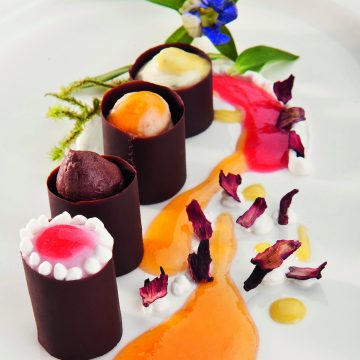 A Recipe by Nadia Santini 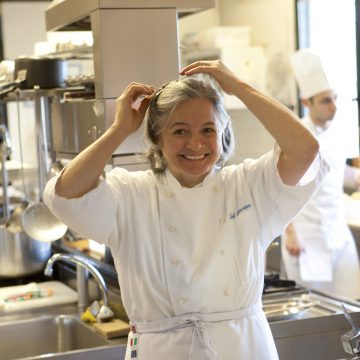 Cooking From The Heart

Sudi Pigott travels to Canneto sull’Oglio, a small town in the Lombardy region of northern Italy, to meet and eat with the Veuve Clicquot World’s Best Female Chef 2013, Nadia Santini, at the family restaurant, dal Pescatore. As seen in FOUR’s International Edition…