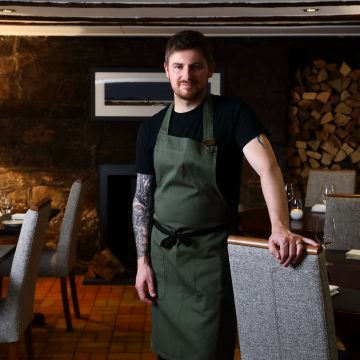 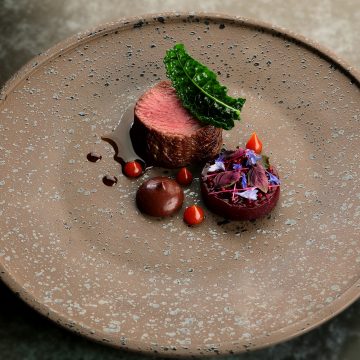 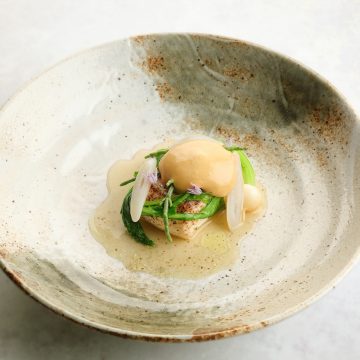 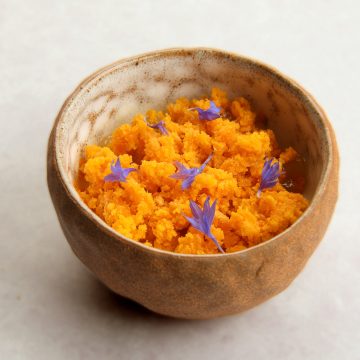 Billy Boyter, chef patron at Fife’s Michelin-starred The Cellar in Anstruther tells FOUR about why quality is key when it comes to putting a smile on foodies’ faces

When opportunity knocks, don’t shut the door – or the oven. For Billy Boyter, chef owner of The Cellar in Anstruther, such wisdom has led to culinary success and even Michelin stardom.

Once a former smokehouse, The Cellar was formerly run by legendary Scottish chef Peter Jukes, who helmed the kitchen for over 30 years.

Following Jukes’ passing in 2013, Billy, who was head chef at Michelin-starred Number One in Edinburgh (but who grew up close by) saw the opportunity to carry on The Cellar’s sublime culinary heritage.

He took the plunge and re-opened it in 2014, retaining the name and achieving an impressive Michelin star just one year later.  He’s continued to put his own stamp on The Cellar, retaining the accolade from Michelin through his “delicious, deftly prepared dishes”.

With a focus on natural cooking, local ingredients and continuous improvement, Sophie Ritchie caught up with Billy to find out more about his unique culinary journey so far.

What inspired you to become a chef?
To be completely honest, I had no intention of becoming a chef. On both sides of my family were fishermen and I thought that was the route I was going to take as well.

I’d taken a summer job as a kitchen porter in a hotel after I’d left school; after a few weeks I was asked by the head chef if I wanted to take on the role of commis chef. And I thought:

“It’s surely going to be better than washing pots.” After the summer I realised how much I’d enjoyed my time in the kitchen and decided to go to college to study hospitality.

Tell us more about your culinary background – where did you train.
One of my first jobs was working at a local seafood restaurant (Craig Millar’s) in St Monans, now called Craig Millar @ 16 West End.

Craig was great to work for; it was a small team with a great family feel to it and amazing fresh seafood coming in daily from small local boats.

For a young chef being able to work with that quality of ingredients was fantastic. After that I moved Perthshire to work with Kevin MacGillivray at Ballathie House Hotel.

This was completely different from a seafood restaurant – I was now able to work with a lot of game and meat local to that area. And again, a great kitchen for a young chef to learn in. Kevin was a real father figure to his team.

I then made the step up to my first Michelin starred restaurant moving to Edinburgh and working for a spell at Martin Wishart’s before joining  the team at Restaurant Number One at The Balmoral Hotel  working under Jeff Bland and Number One head chef Craig Sandle.

In total I spent nearly eight years there, leaving after four years to work for a short period with Wild Thyme Catering (fantastic company and people) only to return to Number One for another four years as head chef when Craig left.

Number One was a fantastic kitchen to work in; we had access to an incredible amount of high-end Scottish produce, fresh scallops and langoustines almost daily; truffles direct from Italy, and a delivery once a week direct from Rungis Market in Paris.

This delivery would always include fresh foie gras, amazing poultry and a lot of other ingredients you would normally struggle to find in Scotland. It really was an Aladdin’s cave of a kitchen. I learnt an incredible amount working under Craig Sandle.

Craig’s way of teaching and a natural ability to pull flavour from ingredients has been something that has always stuck with me. Number One over the years has been blessed with an incredible number of talented chefs which I feel very proud to have been a part of.

What does it take to achieve a Michelin Star?
Only Michelin know the answer to that one. All we do is focus on making our guests happy, being consistent, cooking seasonally with the best Scottish produce available to us (which should just be the norm for any restaurant). And being ourselves.

Do you have a favourite autumn ingredient?
This is like asking which one of your children is your favourite. I love grouse, that’s probably up there. But we have been using a lot of rosehips this year which I’ve became quite fond of: we make them into a sweet and sour puree to go with our venison dish.

What’s next on the cards?
I Just want to keep evolving and improving what we do at The Cellar.