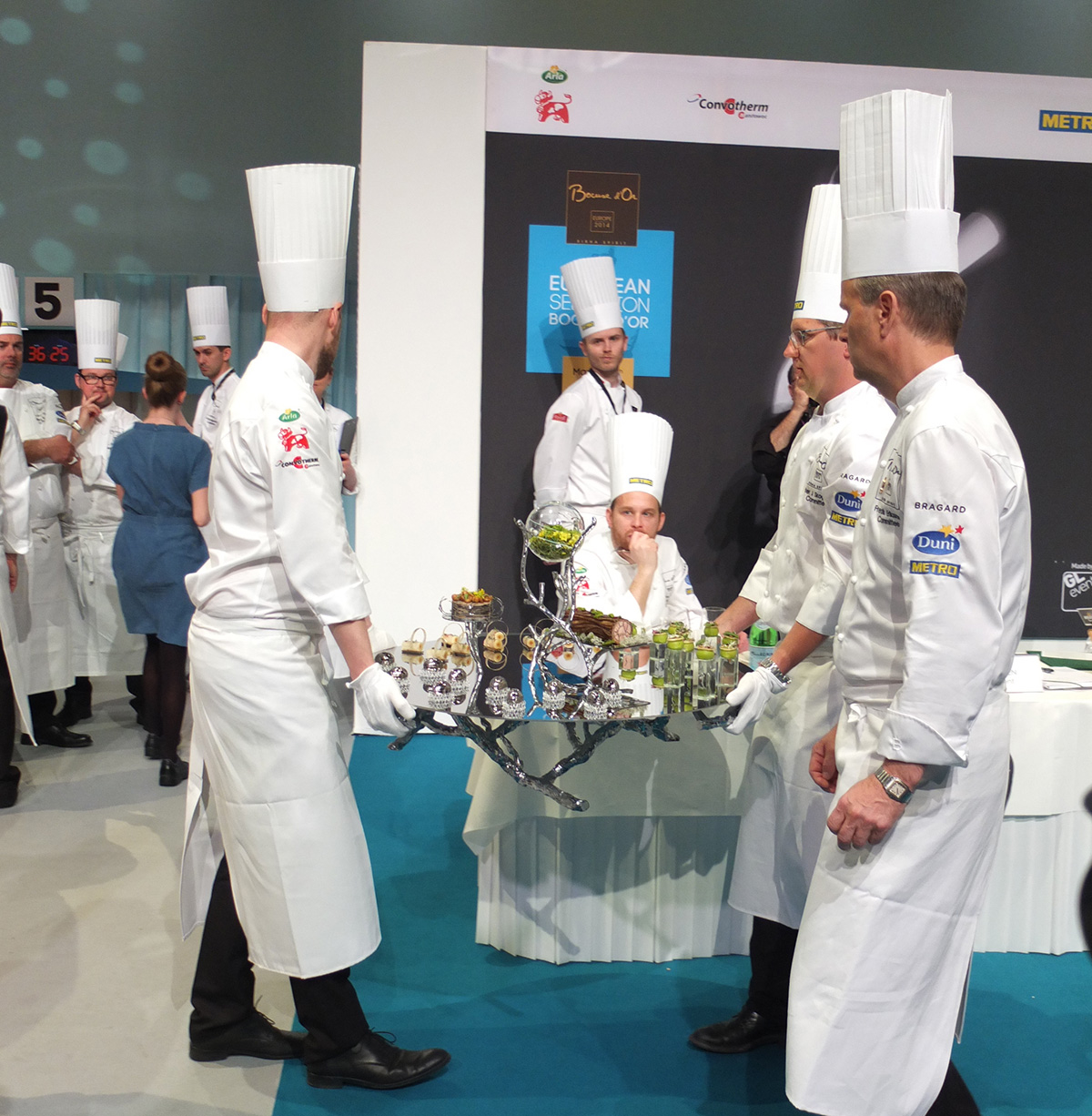 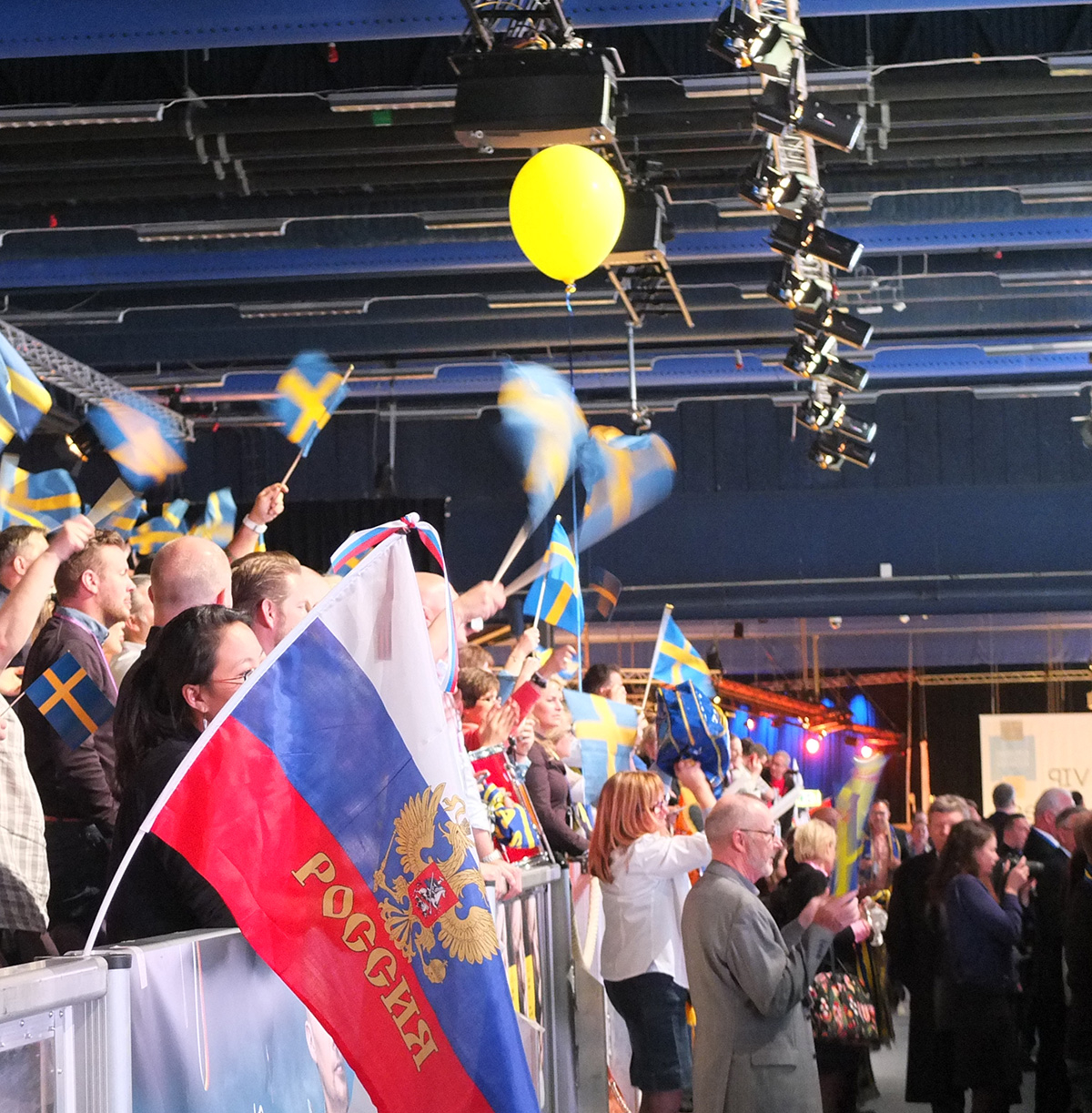 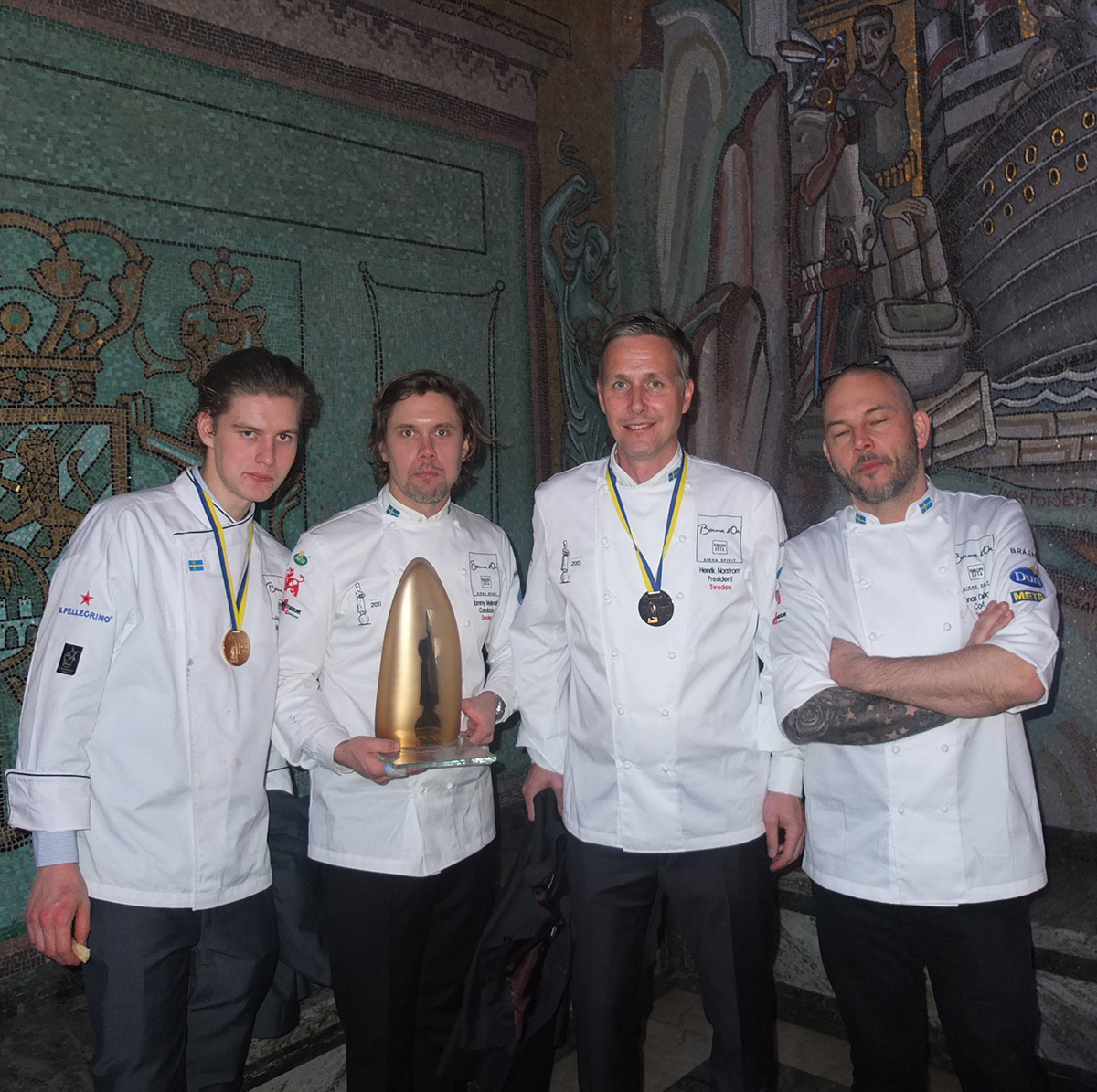 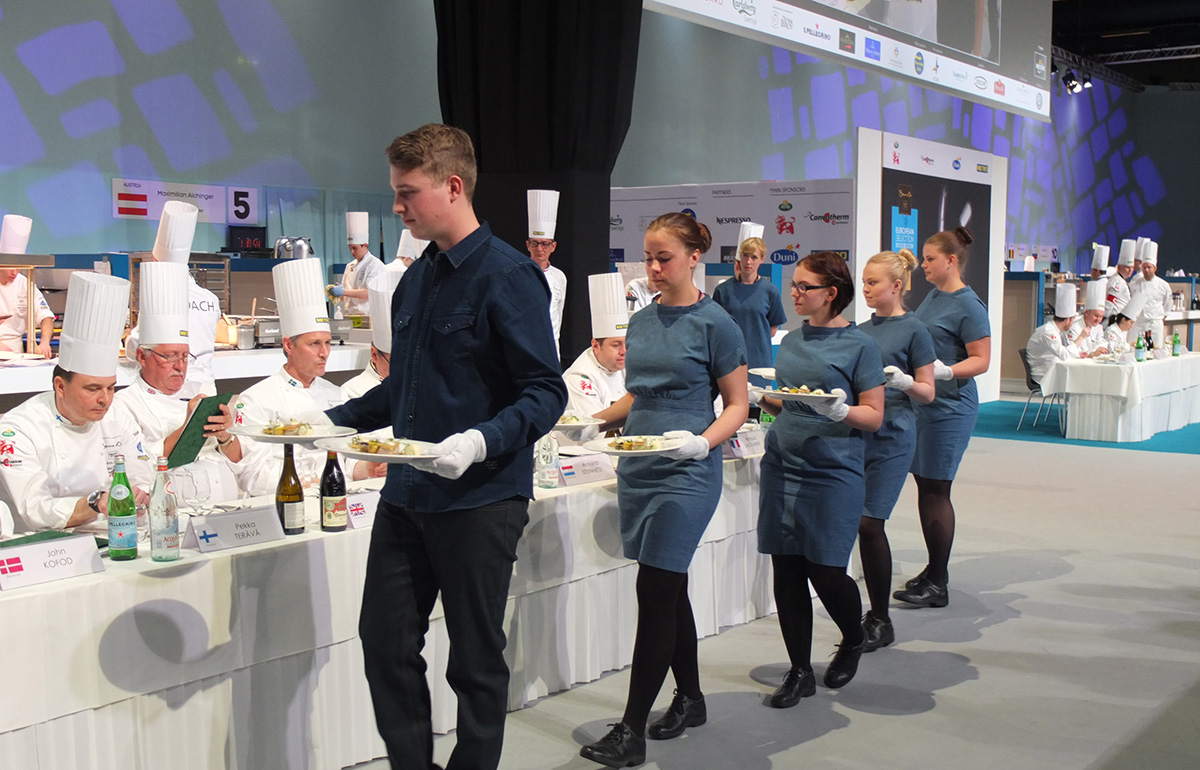 And the winner is Scandinavia! All three 2014 laureates of the European “Cooking Olympics” are from Scandinavia. Yesterday, Swedish winning chef Tommy Myllymäkiwas decorated in front of a 1500-strong crowd, among them crown prince Carl Philip in Stockholm. Danish chef Kenneth Hansen in second place and Norwegian cook Ørjan Johannessen in third completed the Scandinavian triumph on home ground. 20 teams of chef, coach and sommis took part. Turkey participated for the first time, Germany came back. The first 12 teams are qualified for next January’s world final, which traditionally takes place in Bocuse’s home town Lyon among 24 teams from all over the world. Myllymäkialreadyreached 3rd place in 2011 and will be a favourite now. The two­ day competition took placein the Stockholm fairground within the frame of the Gastronord. The teams had 5 hours35minutes to prepare one fish and one meat plate for the 20 jurors from all competing countries, who weredivided into a fish course-jury and one for the meat course. For the first time, the chefs had to choose from a range of ingredients from the host country, Sweden. Bocuse d’Or follows the trend to sustainable, regional and seasonal cuisine, which followsthe philosophy of most Nordic chefs. Myllymäki, who runs his own restaurant “Sjön” in the Swedish town of Jönköping, describes his philosophy as “back to basics” he told FOUR magazine. “As a chef I want to go back to what mother nature has to offer. I like different textures and the composition of the whole plate”. He is sure, that ingredients won’t get any better by travelling thousands of miles.

New to the most prestigious cooking competition was the Eurovision Song Contest-like atmosphere. Fans were waving flags, shouting, singing. Some, like the British, tried to stimulate their team with the sound of trumpets and drums. The euphoria of the home crowd at the announcement of the winner was amazing. The huge festive Dinner at city hall, with speeches by the trade minister and the mayor, made it clear, how important as well the Swedish state, the city and it’s people took the culinary event. Myllymäki, who runs his own restaurant “Sjön” in the Swedish town of Jönköping, describes his philosophy as “back to basics”, he told FOUR magazine. “As a chef I want to go back to what mother nature has to offer. I like different textures and the composition of the whole plate”. He is surethat ingredients don’t get any better by travelling thousands of miles.

Tommy Myllymäki is the hero of today’s papers. He was especially happy, since he rates the level of the two days very high, saying that “15 of the 20 chefs were really good.” But what made the difference to his favour on such a high level? It’s the small nuances.

French juror and president of the national committee, Régis Macon said the perfect acidity and originality of the fish course, the mix of flavours, the overall presentation and the plate’s Swedish identity defined the winner.

, two ­Michelin­ star-­awarded local chef and honorary jury president, stated, that “the good teams were really good and you could easily seewho made moreeffortto prepare for the competition.” To have a real chance of winning, the teams needed good sponsors and had to train intensely. Macon recommends at least two months training. Rumours saythat to make it to the top three in Lyon, you have to invest up to €1m!

Thechoice of the location and the result is an representative award for the emergingNordic haute-cuisine. “It’s amazing how it has developed over the last five years” says Frantzén. The launch of theholdsstrong to this. But it’s not all about the stars for everybody. Runner­-up Kenneth Hansenof the famous Svinkløv Badehotel by the Danish seaside, says that a star is not his aim. “My guests are the most important critics” he told us.Similarly the Swedish winner,Myllymäki’sphilosophy indulges inthe closeness to nature. Both like a pure, clean style with best ingredients.

The use of beets and berries and the perfect climate for many fishes make Scandinavian cuisine special,says Hansen. He aim wasto create a meal like never before at the Bocuse d’Or and he subsequently got the highest score for his technicalskills. He thinks that he could improve on his presentation, however and believes thatthepreperation he didand Sweden’s large budget may have played a role. “I’m hungry now for Lyon” he said.

Finland’s chef Matti Jämsen added the win in the Meat plate category to the Scandinavian glory. French chef Nicolas Davouze, who ended on 4th place, won the fish category.A fairytale­-like story came true for Russian Valeriya Sidorova, who was awarded as the best Commis. The confectioner had been jobless for a while at the time of preparation, asthe restaurant she worked at closed for a relaunch. “Bocuse is like a God for me”,she said. Beside the rise ofthe Nordic chefs, the name giver’s Nouvelle Cuisine is a clear winner of culinaric trends. The molecular revolution seems to be over.

Tommy Myllymäkisays, “I don’t like a cube on the plate where you can’t figure out what it actually is made of. I want that my guests can see, what they eat. I want to suprise them only by the quality.”