Auction Against Hunger at Shoreditch House

On 7May from 7pm Shoreditch House will be hosting the Auction Against Hunger event,in collaboration with humanitarian organisationActionAgainst Hunger.

ActionAgainst Hunger ACF International is an international humanitarian organisation committed to ending child hunger. Calling upon some of the restaurant industry’s biggest names, the Auction Against Hungerevent will raise money for malnourished children, worldwide.

A limited number of tickets are available to the public, so bagging a ticket is well worth it, especially when you could be in for the chance to win one of the following prizes:

A decadent supper for yourself and eight guests, cooked by Michelin-starred Angela Hartnett, in your home

A day and night at the Waterside Inn, Bray, including time in the kitchen with the legendary Alain Roux and dinner at the three Michelin star restaurant

Deer stalking with The Ledbury’s award-winning Brett Graham, followed by a venison butchery master class and lunch at The Pot Kiln, Berkshire

An exclusive behind the scenes experience at Michelin-starred Alyn Williams at The Westbury, with a table for four set up in the kitchen during the buzz and drama of service and a bespoke seven-course tasting menu.

As well as a live and silent auction, the evening will include a champagne reception, eats from London’s trendyDirty BurgerandChicken Shop, a raffle, live music and magic tricks from magician to the stars Fay Presto.

Set to be the ultimate culinary connoisseur’s charity do, Auction Against Hunger has one aim, to raise as much funding as possible for malnourished children across the globe – an opportunity not to be missed.

Helping Haiti was the focus of the Andrea Bocelli Foundation’s latest benefit in which €45,000 was raised for the charity…

The Ivy sheds its furnishings

Iconic London restaurant The Ivy auctioned off some its furniture, art and artefacts for more than £1m for charity.

#FOURNEWS | The World’s Most Expensive Menu

Over the weekend, the Titanic’s menu was auctioned for a collosal £60,000… 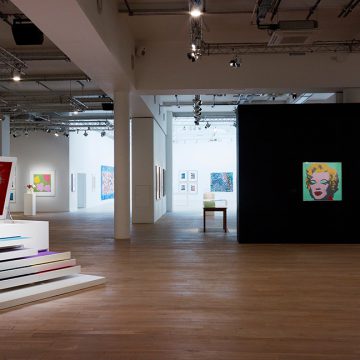