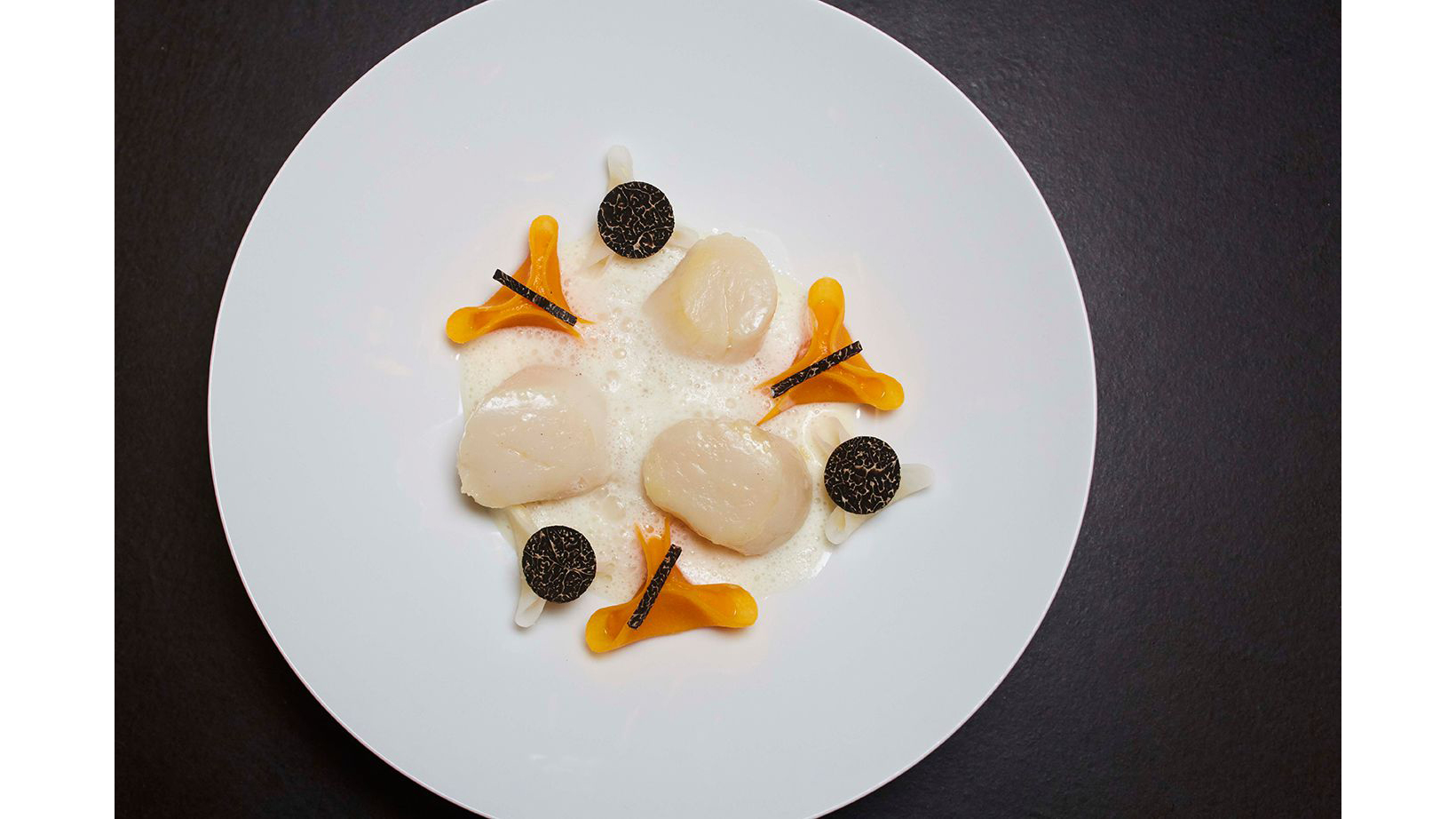 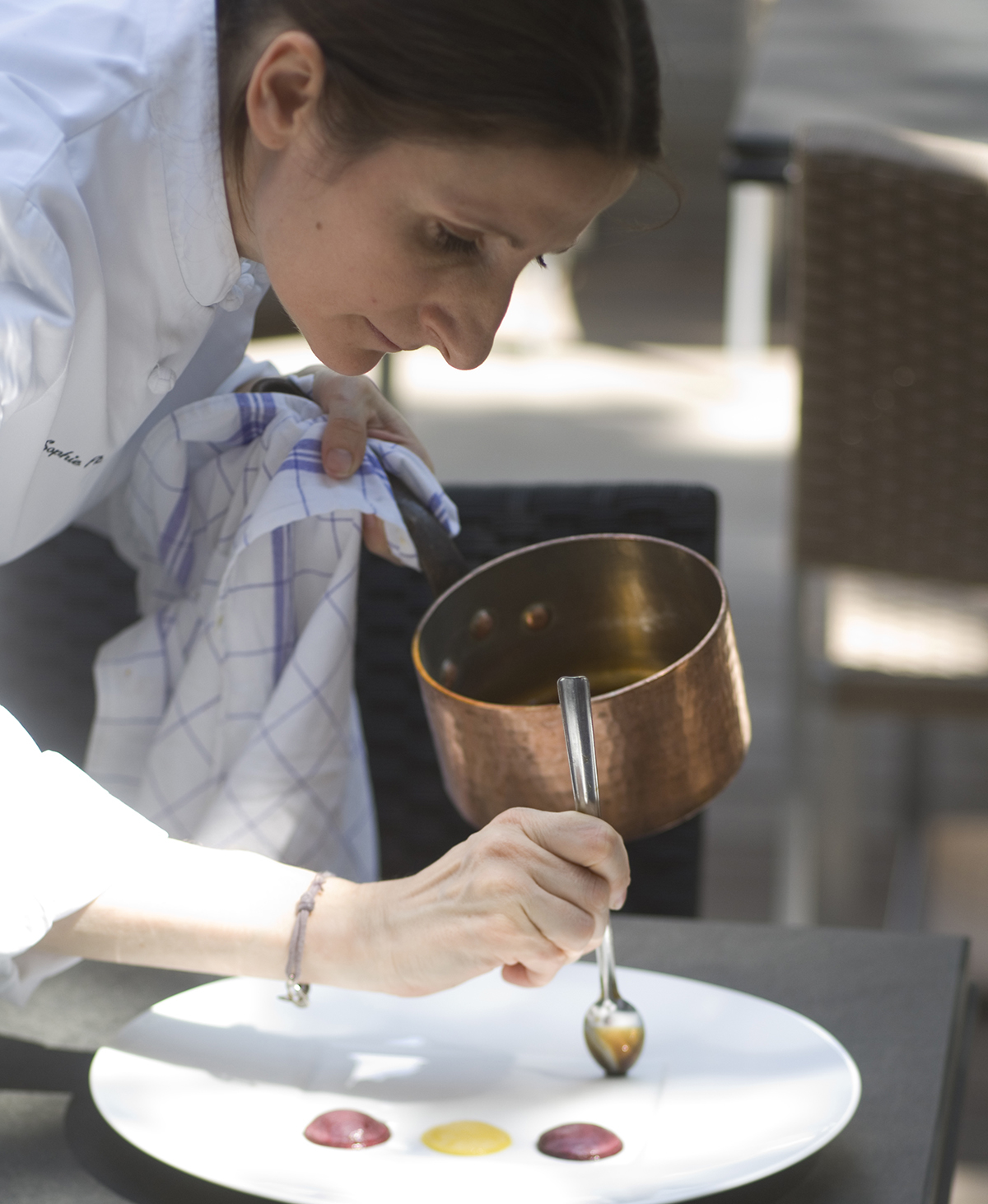 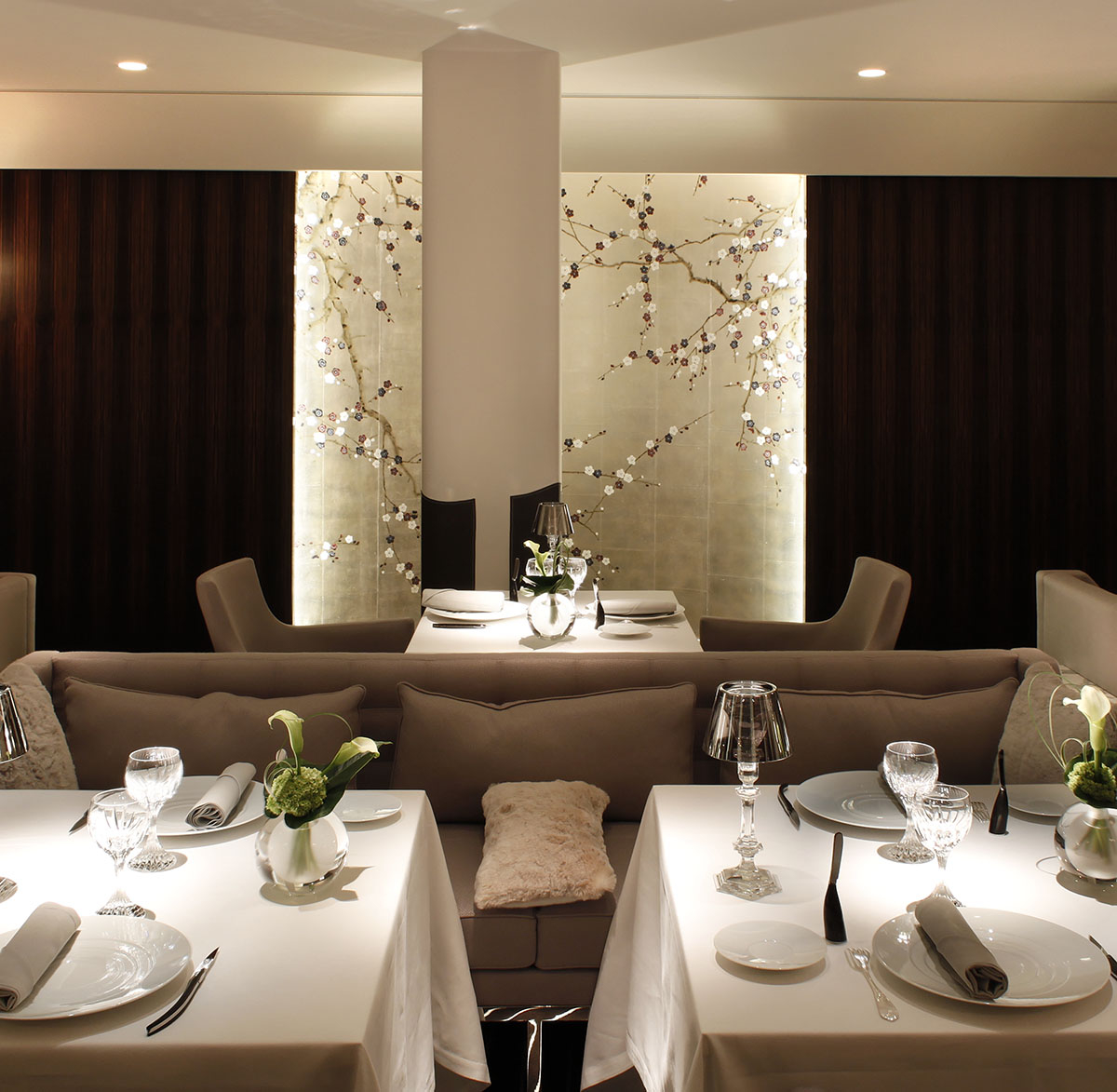 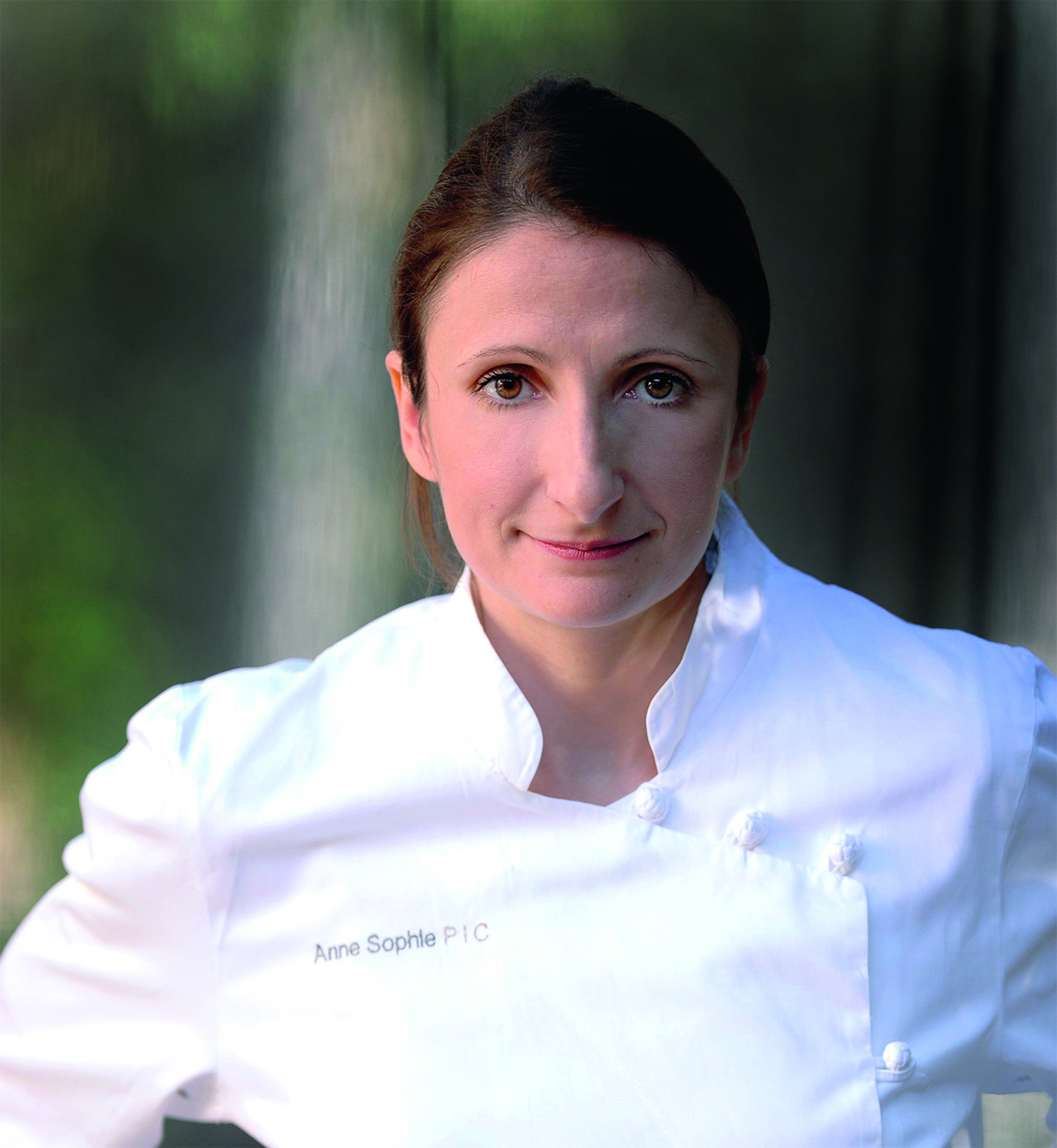 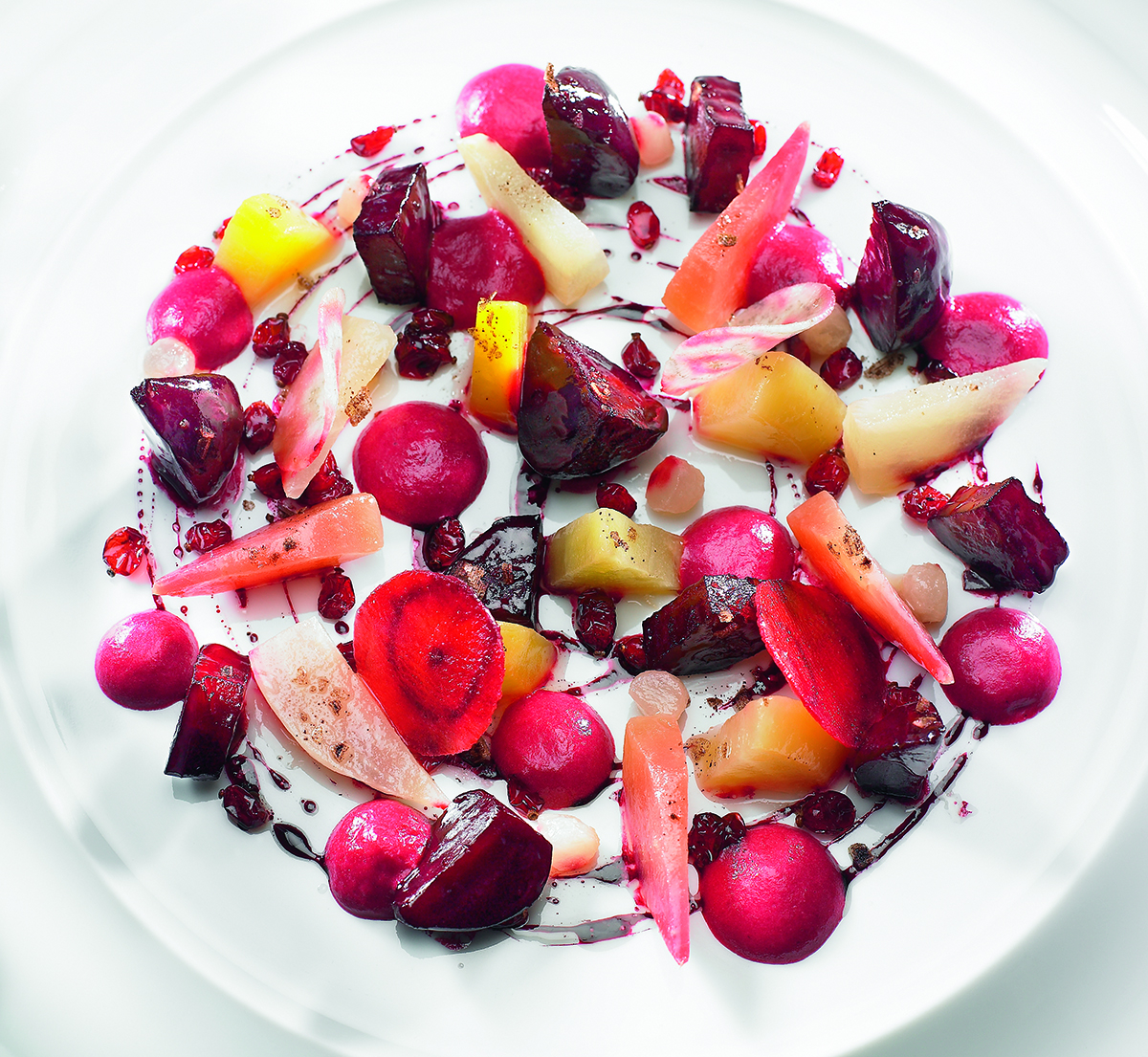 Chef, mother and philanthropist; Anne-Sophie Pic stepped out of her father’s shadow to become one of the most celebrated chefs in the world. Here, she reveals fond memories of growing up in the kitchen and what it feels like to have been crowned the first World’s Best Female Chef, writes Rebecca Howe.

In 2011 Anne-Sophie Pic not only held the title of the only female chef in the world to hold three Michelin stars, but she was crowned the World’s Best Female Chef at the annual World’s 50 Best Restaurants Awards. It’s a lot of pressure for one woman, but Anne-Sophie takes it all in her stride. When Maison Pic was awarded its third Michelin star, it was, she says, both an honour and a tribute to her father and grandfather. “Being rewarded is not a goal, but I admit that I’m very sensitive when an international guide, like the Michelin, or my peers recognise my work.”

“I don’t know what tomorrow will bring, but everyday I’m working hard to keep the highest level of quality. I demand this level from the staff and myself; this is my main preoccupation. What interests me is also pushing the limits of my cuisine and trying more complex associations, by going to meet producers and discovering new producers and farmers.”

In addition to dividing her time between three restaurants, Anne-Sophie oversees the Anne-Sophie Pic Foundation to help disadvantaged children. “My foundation helps children suffering from illness and gives a little happiness to them and their families through my work.”

When Anne-Sophie was a child, she remembers being lured into the kitchen by the sweet smell of her family’s cooking. “I remember the special aroma of arriving home after school, when the pastry chef would offer me subtle choux à la crème,” she says. “I would dip into the big copper pots of crayfish that were simmering on the stove.”

Anne-Sophie was a privileged child. The daughter of Jacques Pic and granddaughter of André Pic, both chefs in the family restaurant Maison Pic in Valence, Drôme, France. It was André who first established the restaurant and led it to win three Michelin stars. Although, two stars were lost before Jacques took over the restaurant, which inspired him to win them back—in honour of his father.

Jacques Pic introduced an eight-course tasting menu to the restaurant, becoming one of the first chef’s of haute cuisine to steer away from the traditional à la carte. By 1973, Jacques had restored the third star and Maison Pic was once again basking in Michelin glory.

Anne-Sophie and her brother, Alain, naturally inherited their family’s love of cooking and they too ended up in the kitchen of Maison Pic.

“My taste developed almost without my knowing it, as a result of my close relationship with my parents, the kitchen and its staff,” she says.

“At the very beginning, I tried to follow in my father’s footsteps, but very quickly I understood that I had to find my own style. I am permanently searching for new contrasting textures and associations that underline, construct and elaborate my cuisine. Year after year, I am in the mood for stronger tastes: the combinations of flavours are more and more audacious but still in the respect of each ingredient.”

Anne-Sophie loves her vegetables. So much so that vegetables are often the focus of her menu at Maison Pic. “I love working with vegetables. The simplicity of the ingredients allows me to make very interesting associations, such as beetroot and coffee, carrot and orange blossom, cabbage and bergamot.

“There are many vegetables on the menu at Maison Pic. There’s also fish that I concoct with fantasy and a few meats.” Anne-Sophie explains: “I like to bring out the sweetness in vegetables, I have a taste for acidity and can’t resist the charm of evanescence. For example, with the beetroot dish [I combine] smooth and creamy beet of chioggia, yellow and crapaudine beetroots with Blue Mountain coffee and cranberry. There is always a hidden surprise, a touch of acidity and a nuance of colour.”

Anne-Sophie’s flavours are frank, precise and come together in exciting combinations: “Seasoning, tenderness, respect, precision— all of these are essential elements that come together to express and create emotions.”

In addition to the family restaurant, Maison Pic, Anne-Sophie opened Beau Rivage Palace in Lausanne, Switzerland, and most recently La Dame De Pic in Paris in 2011.

“Beau Rivage Palace is an amazing place,” she says. “The restaurant has a view of the lake, with only the Alps on the horizon. It’s fantastic to enjoy a moment there. It is quiet and revitalising.

“I create a menu mixing the combinations that characterise my cuisine and local products. I have been delighted to discover a whole array of new ingredients in Switzerland.” This has allowed Anne-Sophie to rethink her culinary approach, working with freshwater fish, including fera, arctic char and crayfish.

La Dame De Pic took Anne-Sophie to a tough Parisian crowd. But, like with all of her ventures, she’s now conquered the capital city, too. “It’s a fabulous adventure,” says Anne-Sophie. “I really enjoy having a restaurant in Paris, working in this city, meeting news clients. The restaurant recently received one star from the Michelin Guide—just a few months after opening, which is very rare.”

La Dame De Pic differs from Anne-Sophie’s other two restaurants in that it’s the first one she has created from scratch. “I created it from the very beginning. I chose the location, the concept with the perfumes. I am permanently working on new dishes and menus.”

Anne-Sophie had been planning La Dame De Pic for two years before the restaurant opened and it certainly has a woman’s touch—using unique fragrances to stir the memory. Anne-Sophie has worked with perfumer Philippe Bousseton to design fragrances based on the flavours of the menu. Describing La Dame De Pic, she says: “The atmosphere is cordial and welcoming. The fact that you choose your first menu with a fragrance makes people curious and creates a subject of discussion. I wanted a playful establishment, where people feel comfortable.”

Outside of the kitchen, Anne-Sophie is mother to her seven-year-old son, Nathan, but as the very young Grande Dame of contemporary French gastronomy, Anne-Sophie also finds time to rub shoulders with her contemporaries in New York, too, having shared a kitchen with chefs Daniel Boulud and Dan Barber in New York.

There’s a piece of Anne-Sophie in all of her restaurants. Maison Pic is where Anne-Sophie was born and grew up; it is part of her heritage and ultimately her legacy as a chef.

While La Dame De Pic has allowed Anne-Sophie to break gastronomic boundaries with her trailblazing fragrance concept, Beau Rivage offers fresh Swiss ingredients for her to toil with and create dishes of a different variety.

Currently at No.10 in the World’s 50 Best Restaurants, Gaggan Anand continues to wow guests and dignitaries alike with his modernist re-interpretation of classic Indian cuisine during this years S. Pellegrino Sapori culinary event.

Chef Lisa Allen gives FOUR Magazine a look behind the scenes at The Northcote, and talks about her inspirations, culinary experience as well as demonstrating a delicious dessert recipe.

We sit down with Andrew who has been selected as one of the three members of the UK team for the prestigious bi-annual Coupe du Monde de la Pâtisserie, taking place in Lyon in January.