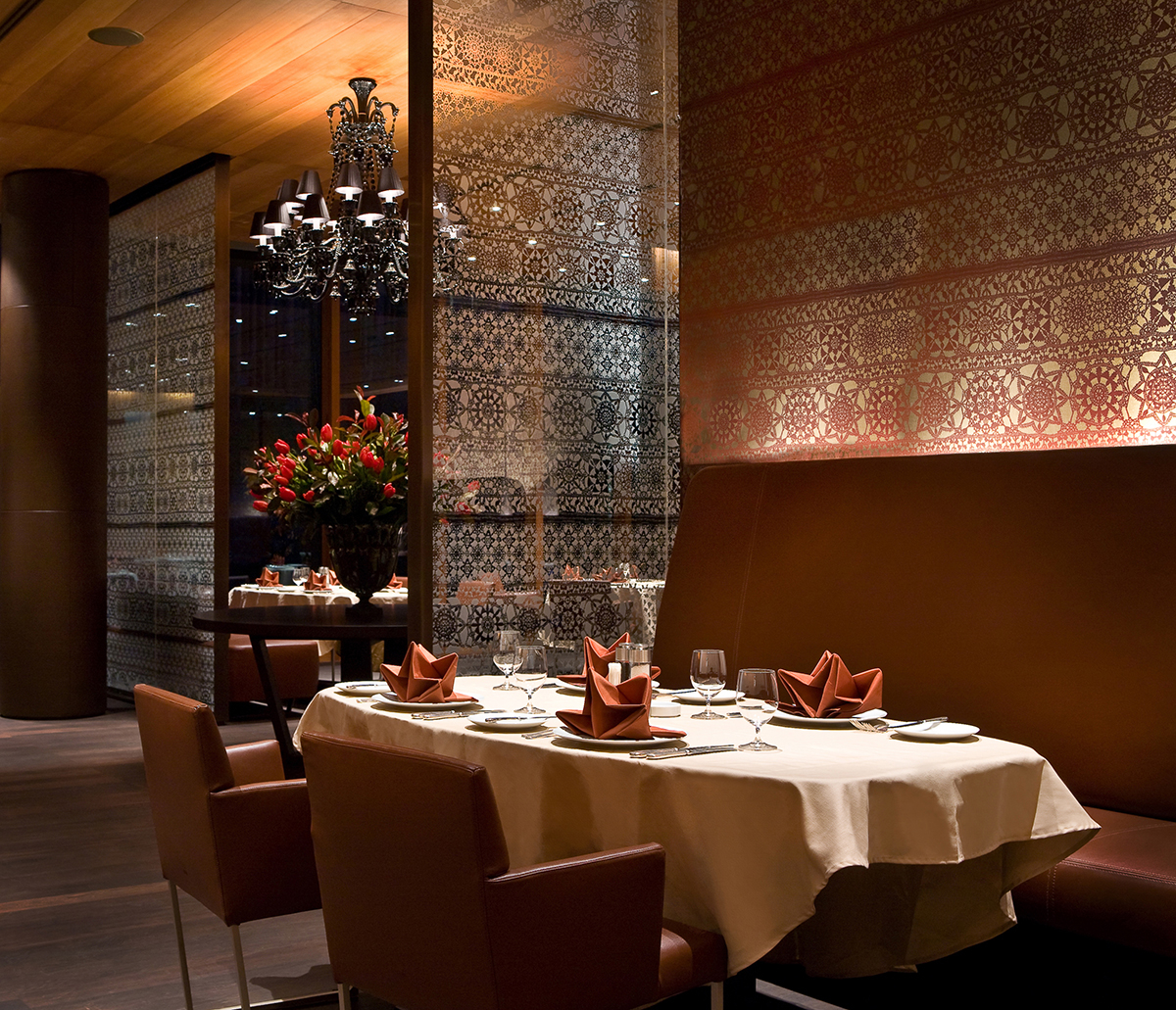 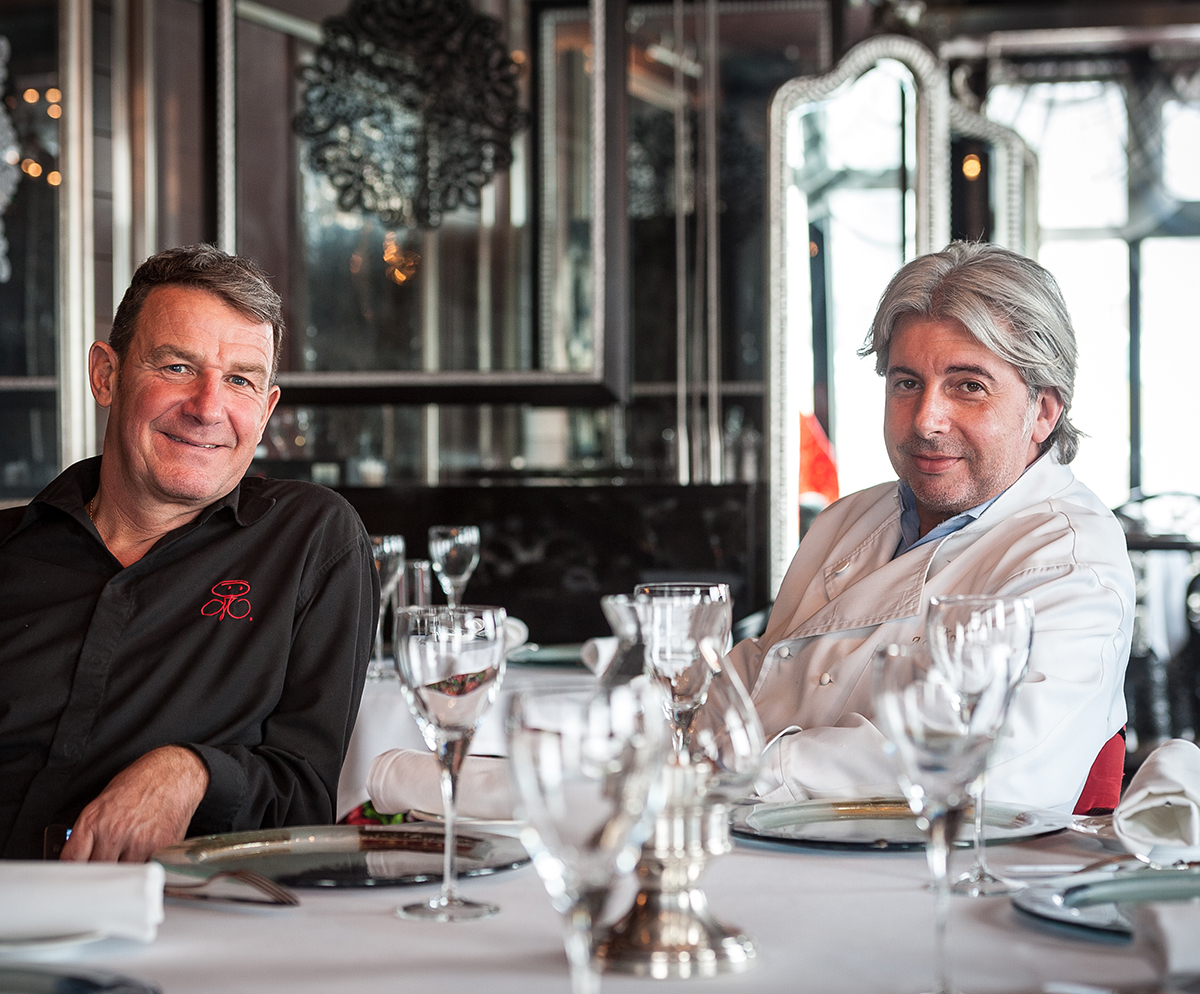 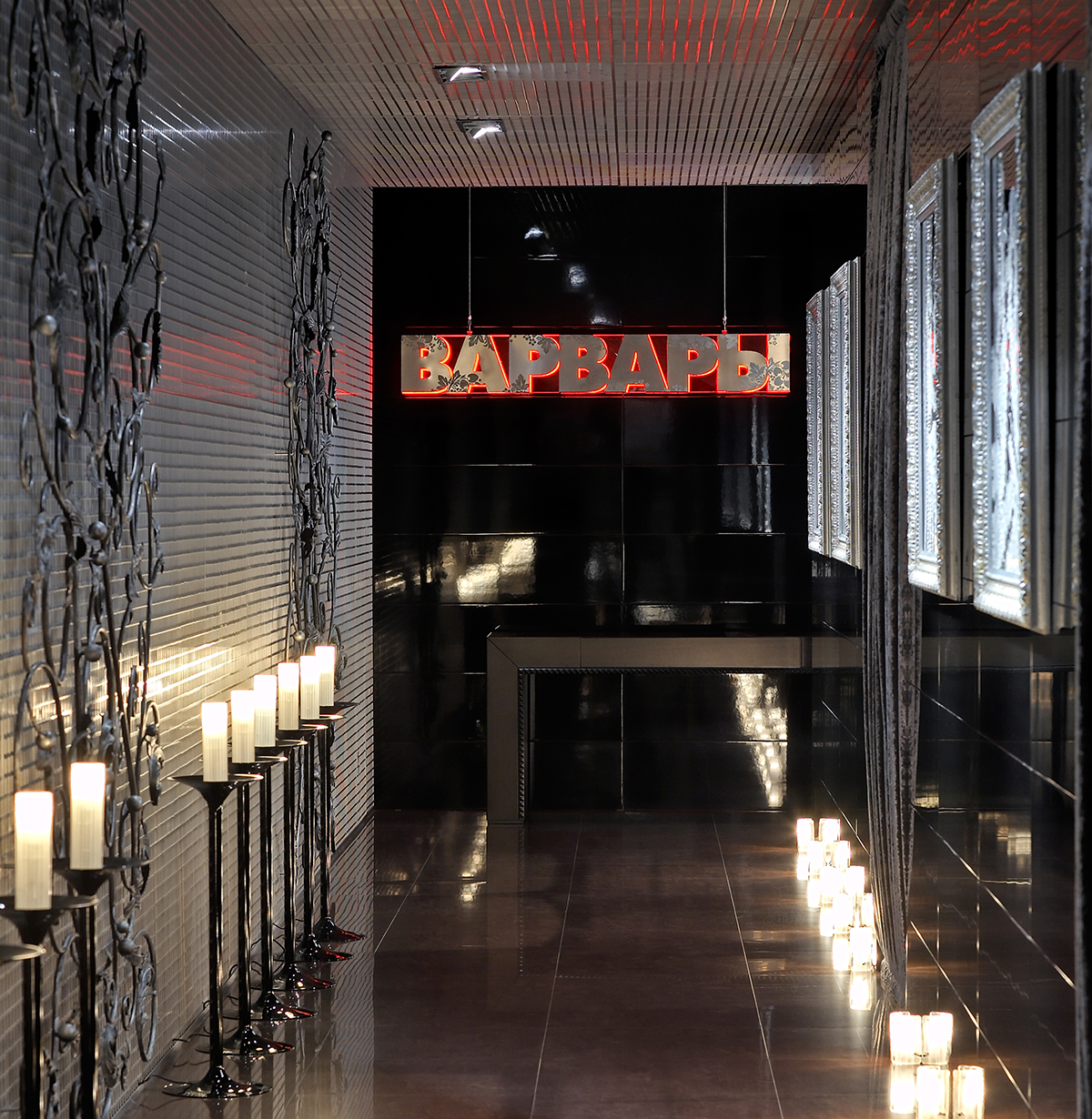 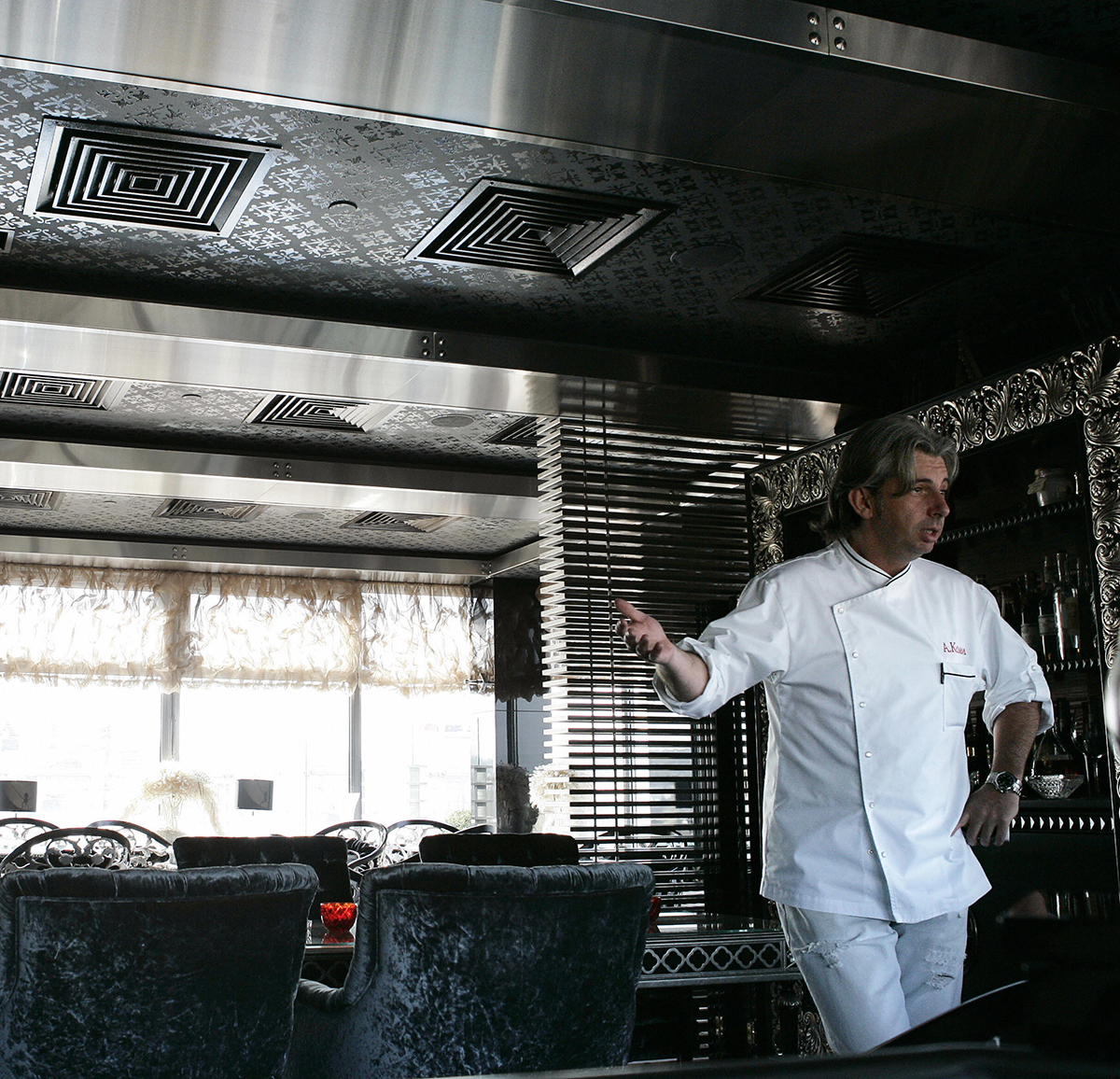 When Varvary, Anatoly Komm’s restaurant, had just opened, he had to throw out the odd clientele who wanted kotlety, a kind of burger, instead of his high-end ‘molecular’ cuisine, which takes Russian cuisine apart and puts it back together in magical ways. Others walked out in disgust.

Today, Anatoly still revels in his outsider status in Russia’s food world. Always outspoken, he considers himself the best Russian chef around— by a mile—but now the world outside agrees with him.

Varvary, his showcase restaurant in Moscow, a few hundred metres from the Kremlin, was in the World’s 50 Best List in 2011 and he has been highly praised by his peers. When elBulli chef Ferran Adrià was asked to list his top ten chefs in the book Coco, published by Phaidon, Anatoly was one of his choices.

“His cooking brings to mind the historic cuisine of the tsars and reminded me that Russia was once a world power in gastronomy,” wrote Adrià. “Anatoly has opened the world’s eyes to the culinary language of his country.”

Interviewing Anatoly is both daunting and bracing. Sometimes he restricts himself to one word answers, at other times, he is delightfully open, provocative, unexpected. At other times he just looks bored. The theatrical nature of his food, he calls his menus ‘spectacles’, is often present when he speak to journalists.

On our first meeting, he answers briefly, wearily, before asking if we know Nasreddin, a figure in Russia and the Turkish world, well known for his aphorisms.

“You cannot explain the taste of a melon to a person unless he has tried it,” says Anatoly, “You need to try as otherwise this is a useless conversation.”

And with that we are taken off for a three and a half hour 13-course meal, which astounds, bewilders and delights all at once.

Before each dish, a waiter explains the concept and which way to eat the dish. It is a journey into the unknown. One dish after the other, surprising, as Anatoly, like a magician, breaks down dishes and builds them up again with his mastery of molecular gastronomy.

Sunflower oil is wrapped in tiny capsules developed in the Soviet Union for artificial caviar, a dessert features four dishes, all made from beetroot. It has to be eaten from left to right to enjoy it properly, commands the waiter.

Anatoly named his Moscow restaurant Varvary, which in Russian means barbarians, as a semi-ironic nod to ignorant foreigners’ views of Russian cooking and partly, it seems, his own view of the local food scene.

The restaurant for him is haute cuisine, high art. When it opened in 2006, few thought that a Moscow restaurant could make it into a world top restaurant list. Moscow food still had an association with the grim days of the Soviet Union.

Things are very different today with a huge range of restaurants, a smattering of high class names like Nobu and Megu, and a growing eco-food movement but Anatoly, who was one of the first to source his supplies to domestic farmers, is sniffy about any real progress.

elBulli and Varvary share the same style, using molecular cuisine and the techniques associated with it to create this new food. Anatoly, however, has come to it in a different way.

One standard technique in molecular gastronomy is reducing foods to its essence, often as a powder or paste. For Anatoly, this is not something revolutionary, but a technique used in the Soviet Union to create food for cosmonauts.

“It would be silly not to use that technique,” says Anatoly. “The majority of the technology which was used in elBulli, which they thought up, had been invented 40 years ago in the USSR.”

These techniques, such as drying out food, helped supply for both cosmonauts and Soviet polar explorers, but they were not his only inspiration. Another looks back to the Soviet shopping, where access to food in a time of shortages was a huge privilege and led to widespread pilfering.

Sour cream, an essential ingredient in Russian cooking, liberally added to borscht, was often siphoned off by shop managers in state-managed shops. In order to cover their petty crime, they added a widely available Soviet powder.

“It was an ordinary thickener. Sour cream was delivered, then half of it was removed. Water and powder was added and the sour cream immediately became thick and [back] to its full size,” says Anatoly.

He once had an amuse bouche on a previous menu, where the diner was given a spoon with a brown liquid on it, a fluid version of Borodinsky bread, the traditional Russian rye bread. “It is a gastronomic joke. You come and get something so that you smile,” says Anatoly when reminded of that dish.

Varvary’s staff call him ‘maestro,’ a title he claims is used because his first name and patronymic, Anatoly Anatolievich is too long in the hustle and bustle of the kitchen. However, it is not an exaggeration to say that he thinks of himself as a maestro. He has compared himself to the composer Dmitry Shostakovich. And said he is equally unappreciated.

For the main menu, which changes once every six months, Anatoly can take months on a dish. “I’m not doing circus tricks just for fun,” he says, explaining how he deconstructed one famous Russian dish, herring in a fur coat.

This is a dish, which often surprised foreign visitors. It looks like a big purple trifle but instead of sherry and cream you get beetroot, mayonnaise and herring at the bottom.

“It is a large dish which you need to cut like a cake.” He explains: “With all the layers it is impossible to put in your mouth at the same time.”

He found the ideal way to keep the taste and make it eatable. The dish now looks like sushi. Instead of maki rolls, it is wrapped in beetroot paper.

Anatoly, 46, came to professional cooking late although he said “I was ready for it from the age of three.”

He first studied as a geophysicist before working in fashion in the 1990s, where he travelled all over the world. It was on these trips that he would go into top restaurants to eat or work, often popping into kitchens to ask how a dish was made and later interning at different places.

He practices what he preaches. His grandmother taught him how to cook but he honed his craft by interning at restaurants around the world.

In Hong Kong, he spent three weeks working on a street food stand near a local fish market. Market customers bought produce and then chose a chef from the dozens working on woks nearby.

He didn’t try any of the chefs’ food before choosing who to intern with.

“I didn’t cook that bad at that time. I could easily tell just by watching who cooks the best out of the 100 chefs.”

Now, he feels he is the top Russian chef in Moscow. “There is no competition,” he says and he dismisses famous names like Arkady Novikov, a famous local restaurateur who now has places in London and New York. He says he has never seen him as a rival, he is pop to his classical music.

And he is not envious of his connections to the powers that be. Novikov has provided dinner for President Vladimir Putin at the Kremlin and has a healthy contempt for the often corrupt bureaucratic legions in Russia.

“To come here you must have intellect. Who becomes a bureaucrat in Russia? Those who can ‘lick arses,’ those who are a little bit close to Putin. For that you don’t need intellect,” he says.

Considering this antagonistic attitude to Novikov, you might forgive the maestro for a moment of schadenfreude after Novikov’s self-named restaurant received a scorching review in London last year, but Anatoly dismisses the review by The Observer’s Jay Rayner and lays into English critics.

“The English have very little money, they never go anywhere, never see anything and just sit on their island. How can you be a critic if you have never been to at least the 100 best restaurants in the world,” he said, getting into his stride, “They have all only been to Heston Blumenthal. For them that is the peak of the world.

“The Guardian should have fired him immediately. I’ll explain why. First it is low professionalism, second he lost all the trust [of readers],” he says, “Can you imagine what would happen if a normal restaurant critic in Paris or Geneva or Madrid wrote that about a restaurant. It would close. He destroyed it and there are queues.”

Why have I never seen any English critics at top food festivals, he continues. “Can you imagine a fashion critic who does not go to the fashion weeks in Milan, Paris or London?” He says: “No, he sits at home and writes ‘Oscar de la Renta is complete crap.’ I saw some photos. It is the same.”

The tirade against English critics is almost over but Anatoly neatly ties it to his idea of cooking being an art. “If you have not listened to a certain amount of music, [read] a certain number of books, then it is meaningless to be a critic.”

Over the last few years, more and more Russians are coming to Varvary. Before, it was mainly foreigners.

“The people who come here are middle class, self-made people, who speak, thank god, at least two languages,” he says.

He returns to England and their food. “If we take England 15 years ago it was a country of fish and chips,” saying much of the progress is to do with the influence of Blumenthal, “Thatdid not appear because of Jamie Oliver, who shows housewives how to wash peas in a bowl.”

And what he says next sums up his view of what he does and what everyone, almost everyone else, does.“I am not against it [Oliver], there has to be one and the other. There can’t just be classical music.” He just does classical music.