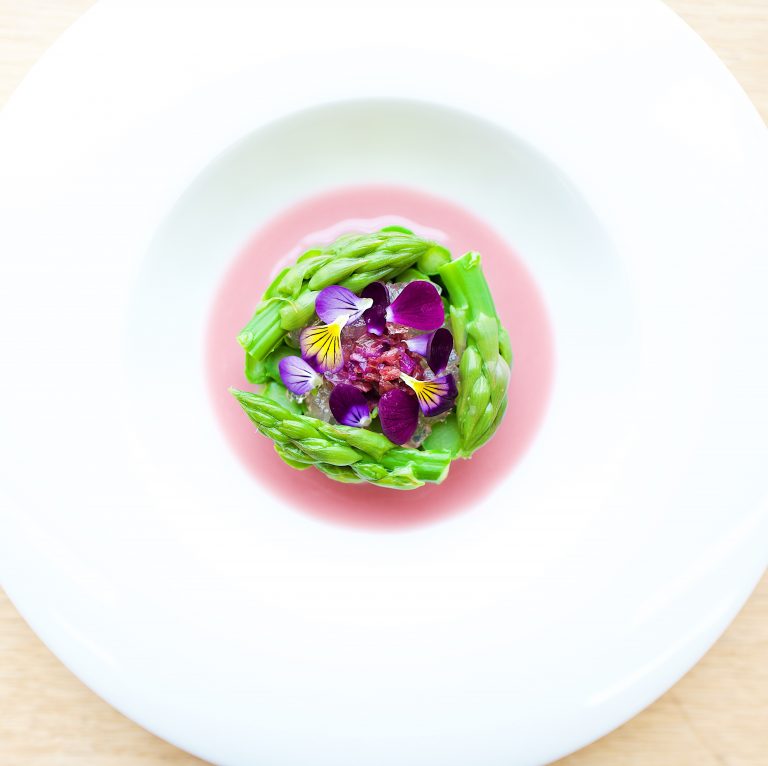 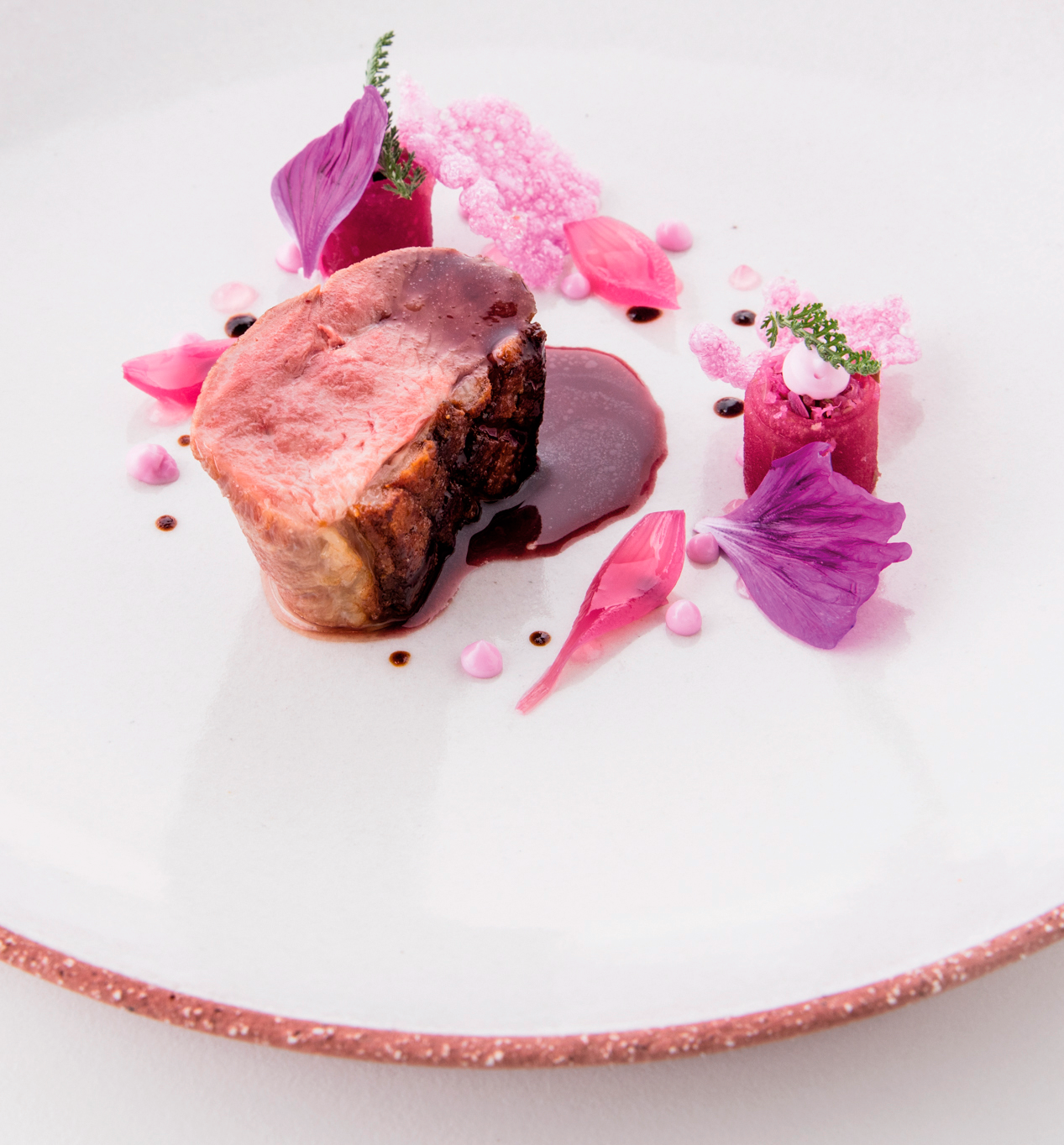 An Ode to the Garden | Sang Hoon Degeimbre

Belgian-chef Sang Hoon Degeimbre started his journey in Miryang, South Korea, before a Belgian family adopted him and his younger brother. During his younger years, he became interested in the field of pharmacy and embarked on studies, which soon lead him to the conclusion that this wasn’t the career path for him.

“I never imagined becoming a chef and having a career in this industry, I didn’t even realize what impact cooking would have on me. I think my parents were the ones that inspired for me. They proposed the idea of hotel school probably due to the fact that I loved to eat.”

This was perhaps the moment everything clicked into place for Degeimbre who quickly cemented his love of cooking. From here on, he would often be found preparing meals for family and friends, which equipped him with the practical and creative skills necessary for cooking for an audience and large numbers.

He soon enrolled in a professional course at a Hotel School in Namur and, although enjoying the course, Degeimbre still felt that it lacked a certain something. So, after a stint at a butchery school, he set out into the working world in an attempt to discover what this missing element was.

An ambitious and driven Degeimbre tried his hand at a variety of catering companies, local restaurants and wine cellars before discovering his innate passion for wine. He decided to continue his studies in Brussels to become a sommelier and not long after boosted his résumé with stages at La Truffe Noire in Brussels; Petit Versailles in Gosselies; and La Salicorne, La Hulpe, and L’Eau Vive in Arbre, before entering the role of wine director.

“After 7 years as a sommelier, I decided to open my own restaurant. My knowledge about wines and all the details of what makes viticulture so interesting (terroir, flavours, pairing etc.), helped me build my cooking style of today; unique pairings, study of the land, aromas around aromas with products from my land.”

With the decision made to finally return to the kitchen, it was in 1997 that Degeimbre and his wife Carine moved to the Belgian countryside to set up L’Air du Temps – located in an old farm in the small area of Liernu. The couple invested not only a significant sum, but also their heart and souls into turning the 5-hectare property into a small 11-room hotel and restaurant with produce cultivated from the surrounding land.

“We started with 3 people, my wife and I included. Our purpose was to share local, quality products that taste nice – that’s it!”

“As I’m curious and positively ambitious, we evolved a lot and had several chapters in the early stages where we experimented a bit, but all of the concepts led to the idea of respect for nature and ‘humanhood’, which are our guests, our team and our producers.”

Degeimbre remained focused on this philosophy and commitment to nature in order to give the restaurant credibility and direction, which paid off a mere three years later when the restaurant received it’s first Michelin star in 2000, followed by its second in 2008.

“We evolved from a small roadside restaurant to a large working farm and hotel. It’s been a truly amazing journey and means a lot to me. Equally, in terms of my style, this has adapted organically over the years in a similar way.

For example, having a garden for more than 15 years has definitely shaped my style and philosophy. That combined other sources of inspiration, plus my Korean roots with their fermentation technique, philosophy and sensibility around food complete this unique palette I try to offer.”

Considered as one of the leaders of the new Walloon cuisine, Degeimbre combines his Belgian-Korean take on fine-dining cuisine, modern techniques and preparations, with a philosophy for local if not zero km ingredients. Given his knowledge on viticulture, wine also plays an integral part of the dining experience with unusual and classic pairings on offer throughout the menu.

“The concept always has to be simple and for us, this is all about the products. You have to know them fully: where they come from and who grows them. In our case we focus on our garden. We have a 5-hectares, which produces 80% of what we cook. Every vegetable, herb, flower comes from our garden.

We have to maximize them, share everything they have to tell, to be sure that more than only taste, we can offer emotions and sensibility about what our land has to offer. We are looking for meaning when we create menu. We tell a story about our nature, the season, the land.”

Luckily, the area is ripe for producing not only fruits and vegetables due to the fertile clay soil, but it also boasts some of the best meat in Belgium (including beef, cow, veal, pork, squab, duck, lamb), and it’s relative proximity to the water also means fresh lobster, caviar, trout, and snails when in season. Equally, Degeimbre works with neighbouring producers who share the same philosophy, work respectfully with the land and where nature is the focus.

“Products are gifts from Earth coming from the soil, energy comes from nature. We have to respect it and take care of it. We can’t mess it with lack of respect or techniques. Even if we are talking about dead gift from Nature – as meat can be – we have to feel them alive and respect them. Chefs have a major role. We feed people, the best we can, we feed their body but also their minds, so we have to help them care about nature by giving the best example through our connection with our producers.”

With this as his driving force, Degeimbre has won numerous accolades and become a celebrated figure on the Belgian gourmet scene. He continues to push conceptual boundaries by blending the aromas of his two home countries with inspiration gathered from various sources along the way.

“Our goal is to give to our guests a unique experience of ‘contemporary terroir’. Terroir in a collective memory is like comfort, a souvenir from a mother or grandmother’s cuisine.”

“Our guests have to find peace and comfort through certain gastronomic parameters (large space, nice decor, certain level of luxury linked with starred restaurant) and that helps them to feel at ease and keep them open to experiences. It’s only then that they can easily accept innovation in taste and service.”

“We want them to create new memories about products, being surprised by them.”

Serving dishes such as; ‘Declination: 15 shades of cabbage, oil of cabbage, lacto juice’, ‘Shell: Scallops from Dieppe, mussels praliné, green walnuts, and sudachi’, ‘Monkfish tail, Chorizo, kimchi, and root vegetables’, and ‘Duck from Rouen: Lacto and pickled vegetables, and Belgian Sichuan pepper sauce’, it’s clear that Degeimbre’s comprehensive and substantial knowledge in his field has resulted in a well-executed yet subtle perception of a variety of flavour nuances.

When asked about a favourite creation, Degeimbre comments, “after 21 years we have so many favourites but Garden of Liernu is still one of our best. Not only it is always on the menu all year long, but it also changes with the seasons so it’s always the same yet always different. I can’t imagine to moving it out of my menu – it’s an ode to the garden, to the season, to nature and all that we love.”

L’air du temps is a place that strives to promote honesty and simplicity, which is perhaps one of the key factors in its success. Degeimbre has a clear idea of who he is and where he comes from and tries to translate this honesty within the food. There is no pretence with what you are being served here, it’s from the land that surrounds you and produced with pride, dedication and care. The second factor in Degeimbre’s success is undeniably his humble and realistic attitude towards the future of the food industry and food sustainability.

“We have to take care about both the human and the nature aspect of this job”, says Degeimbre. “We push ourselves and all the team to find the best in each other because without this our kitchens, our service, not even our future is possible without them.”

“We have to change our vision because mentalities evolve too. The need of our young team is not the same as ours was at their age. We can’t just say it was better before; we have to ask how can we help to build a better future? “It’s always a question of quality not quantity. Ambition should be: not having more and more, but having better and better and for me this means that eventhough our restaurant is a small world it’s big enough to have enough!”