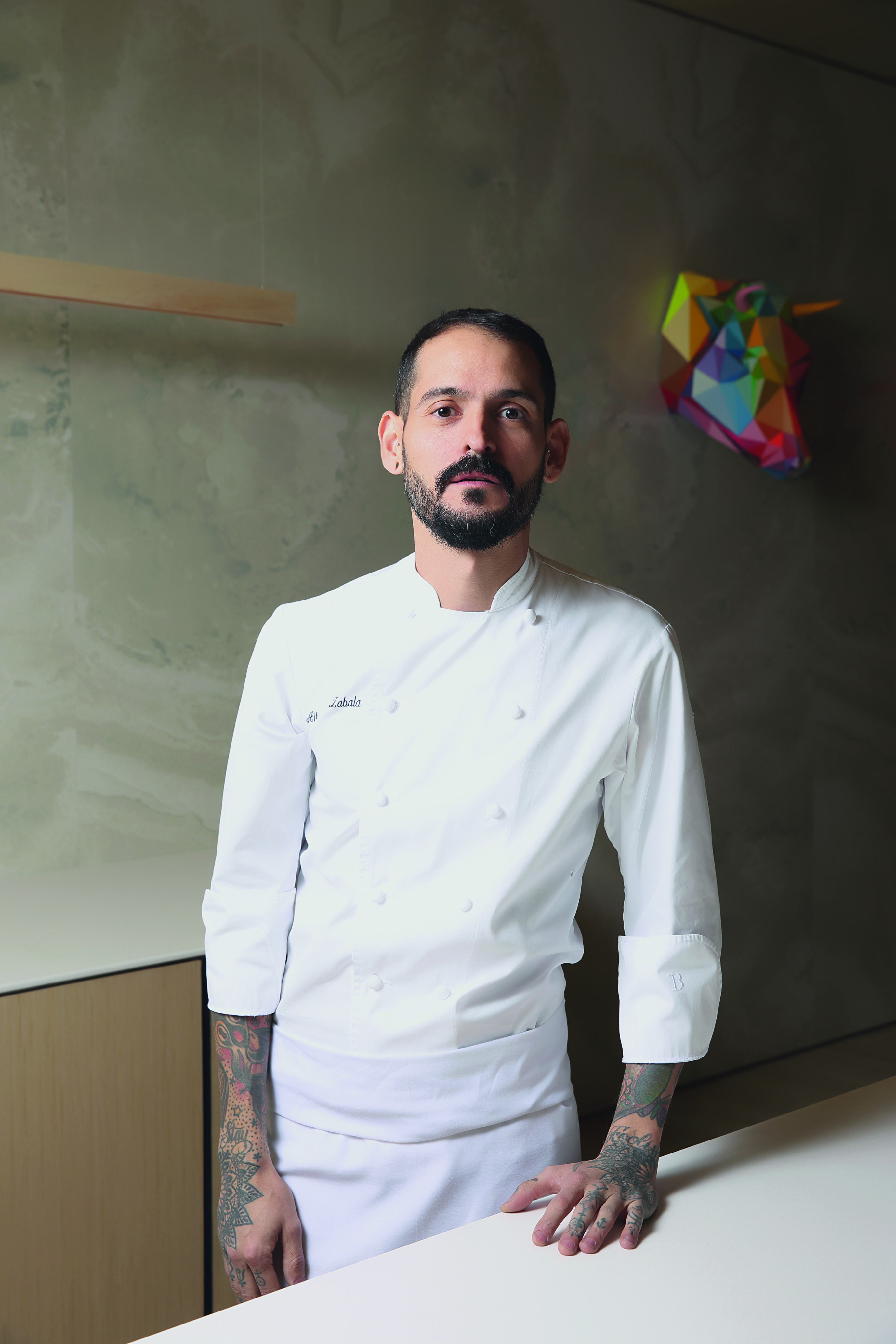 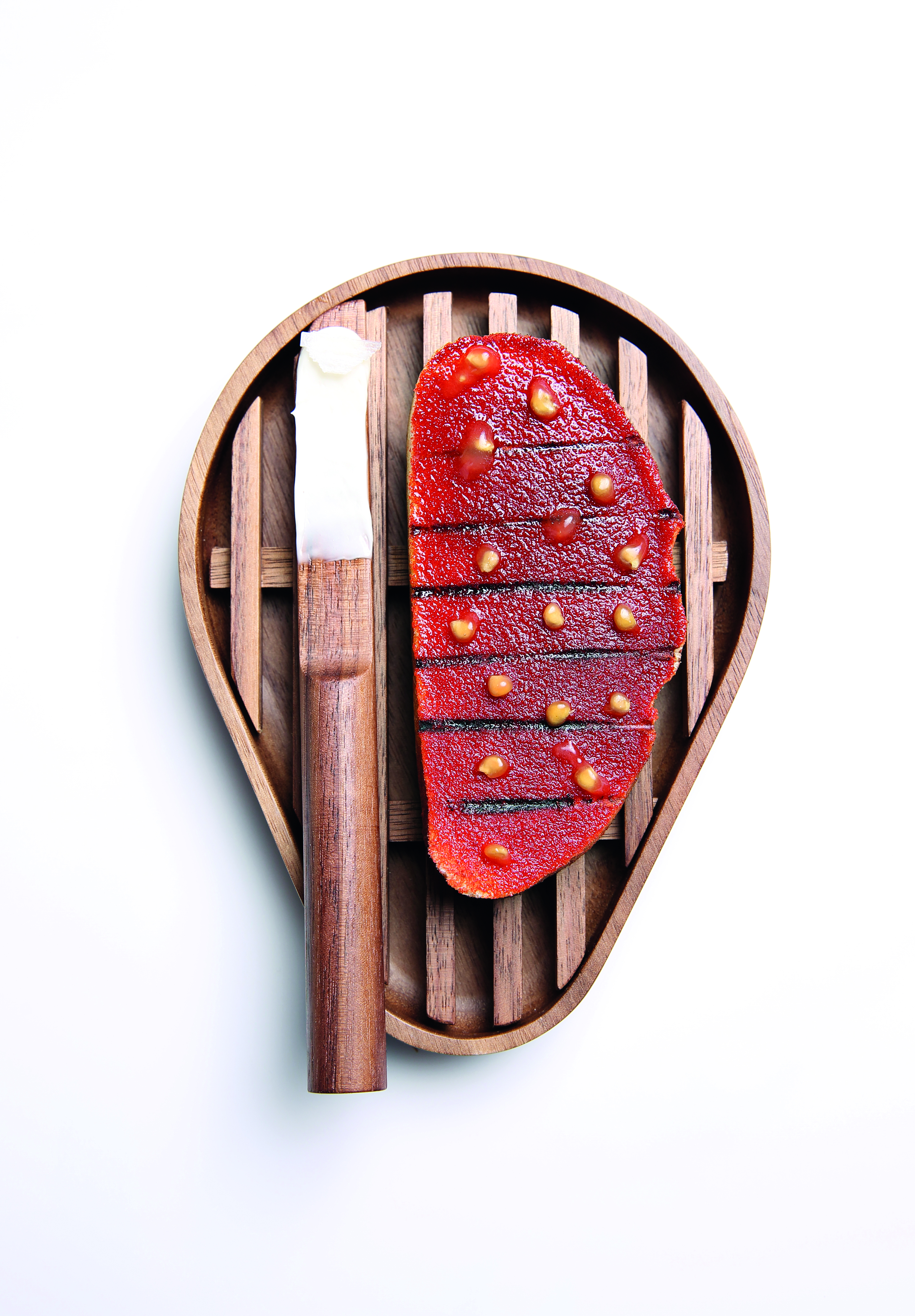 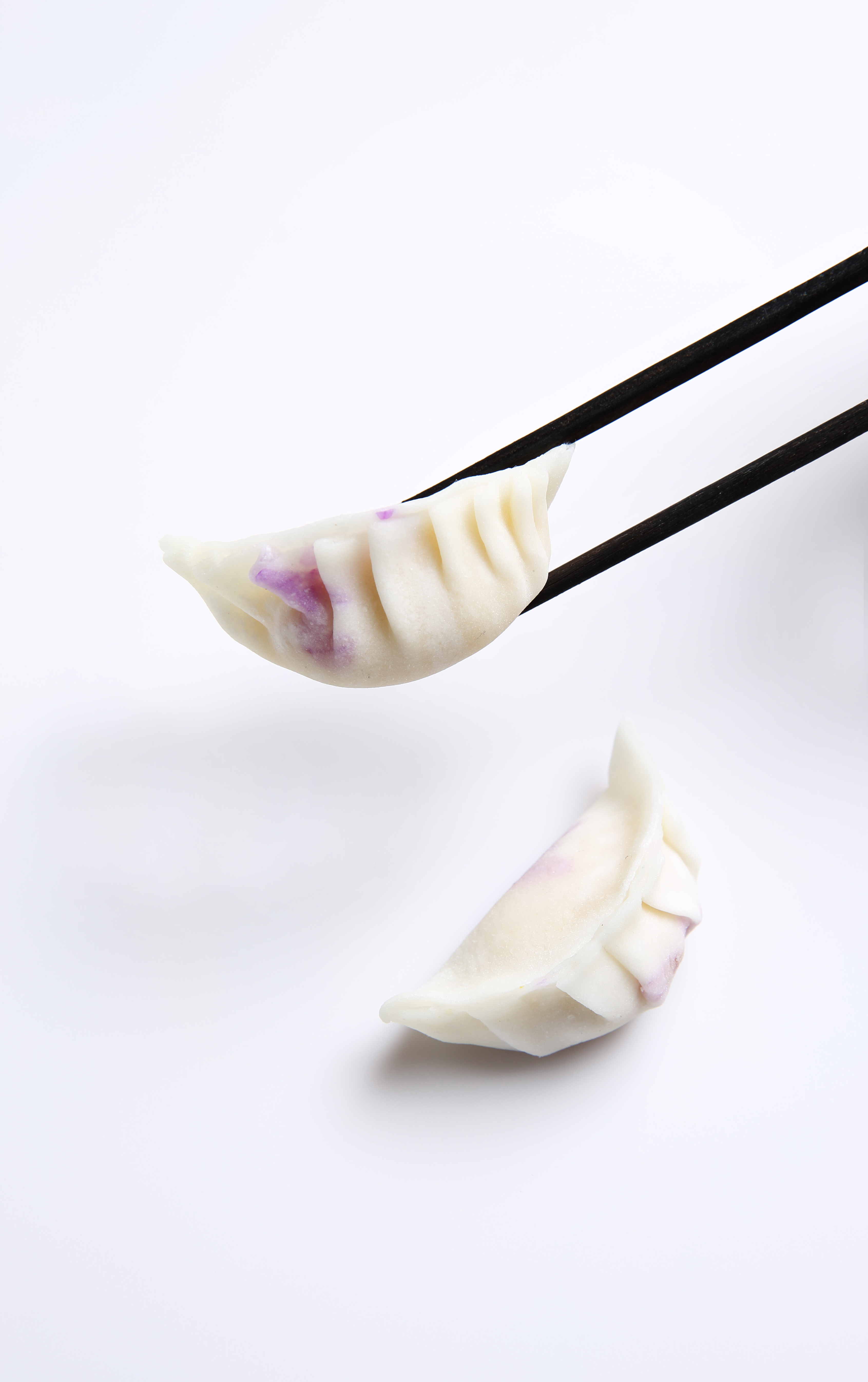 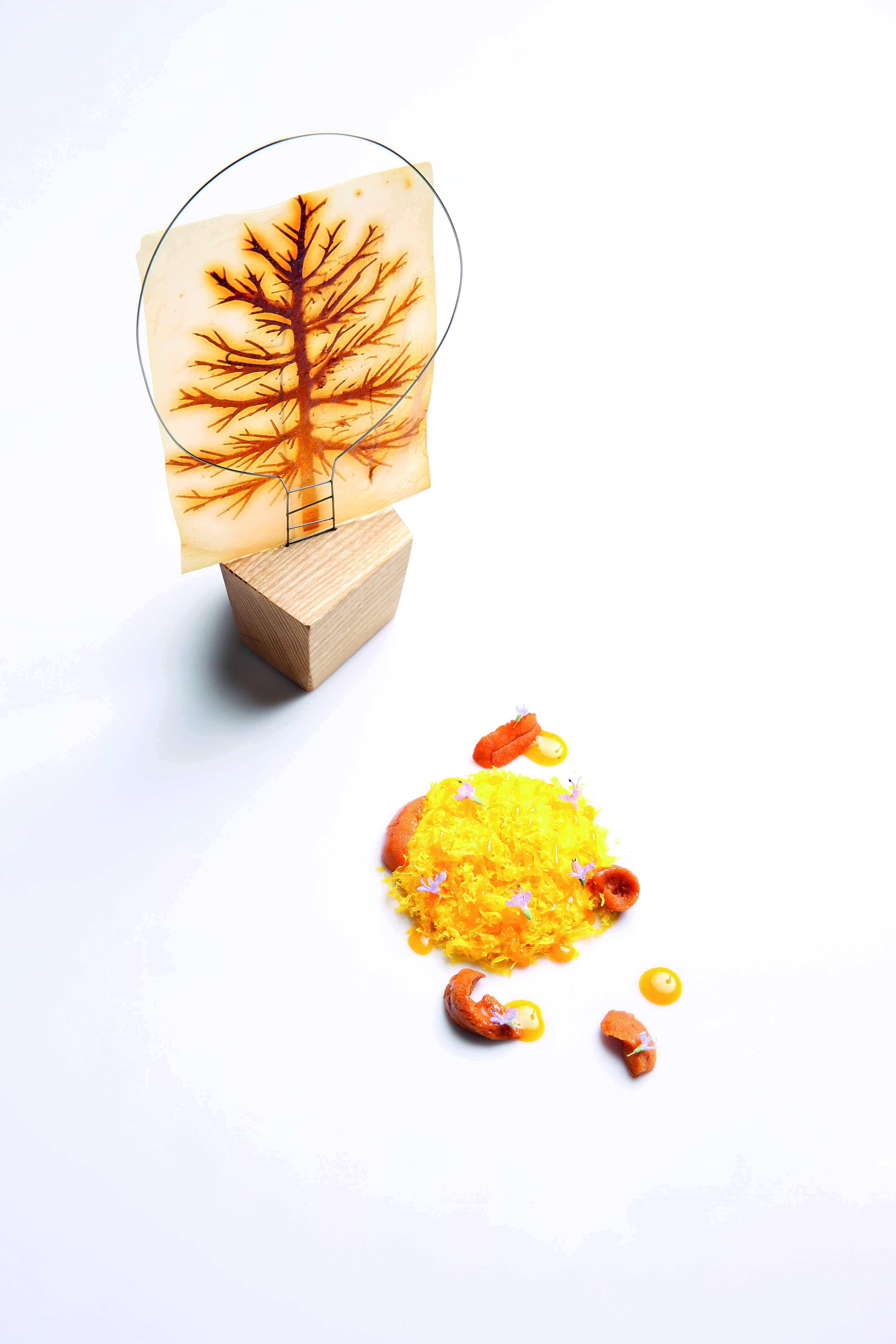 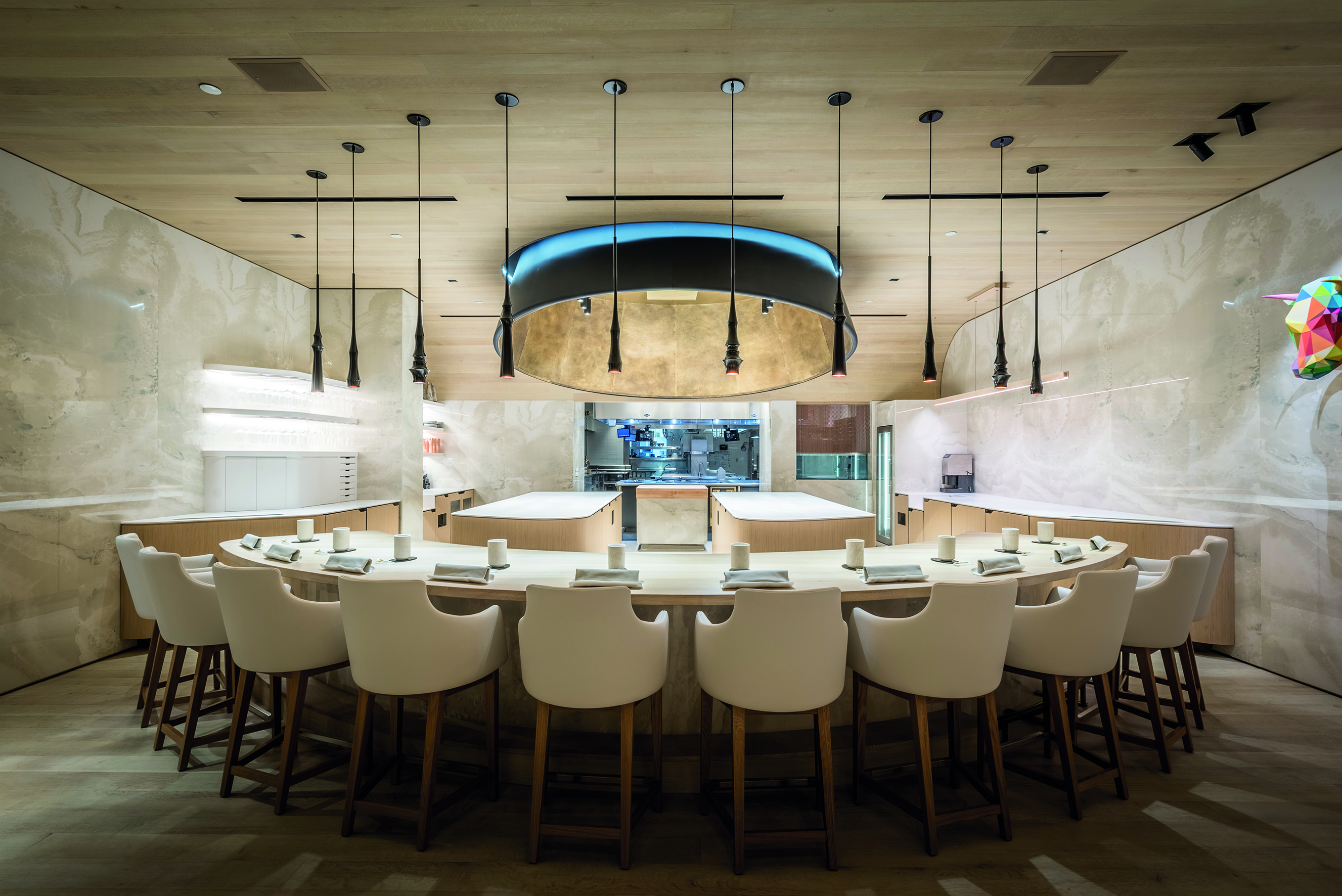 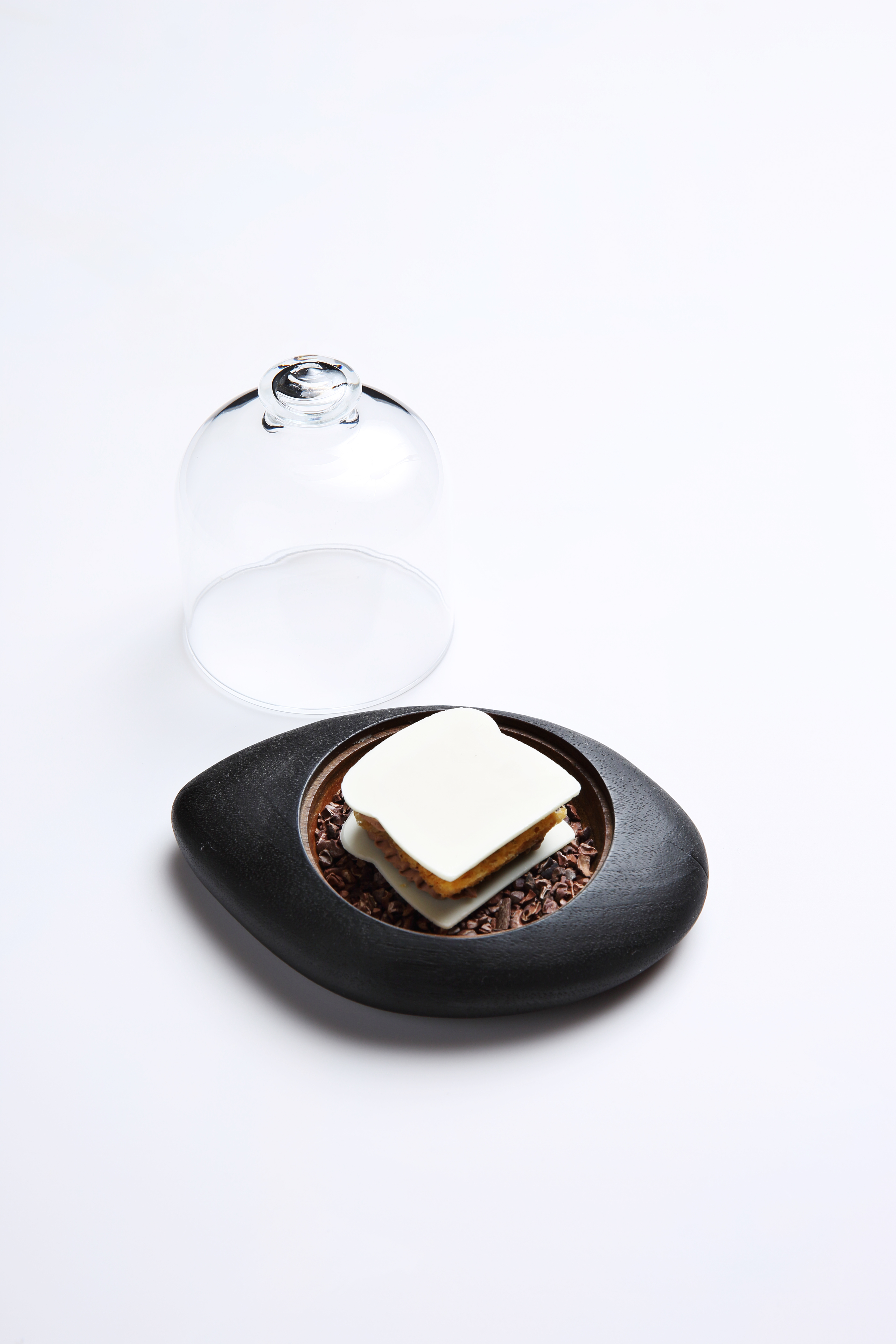 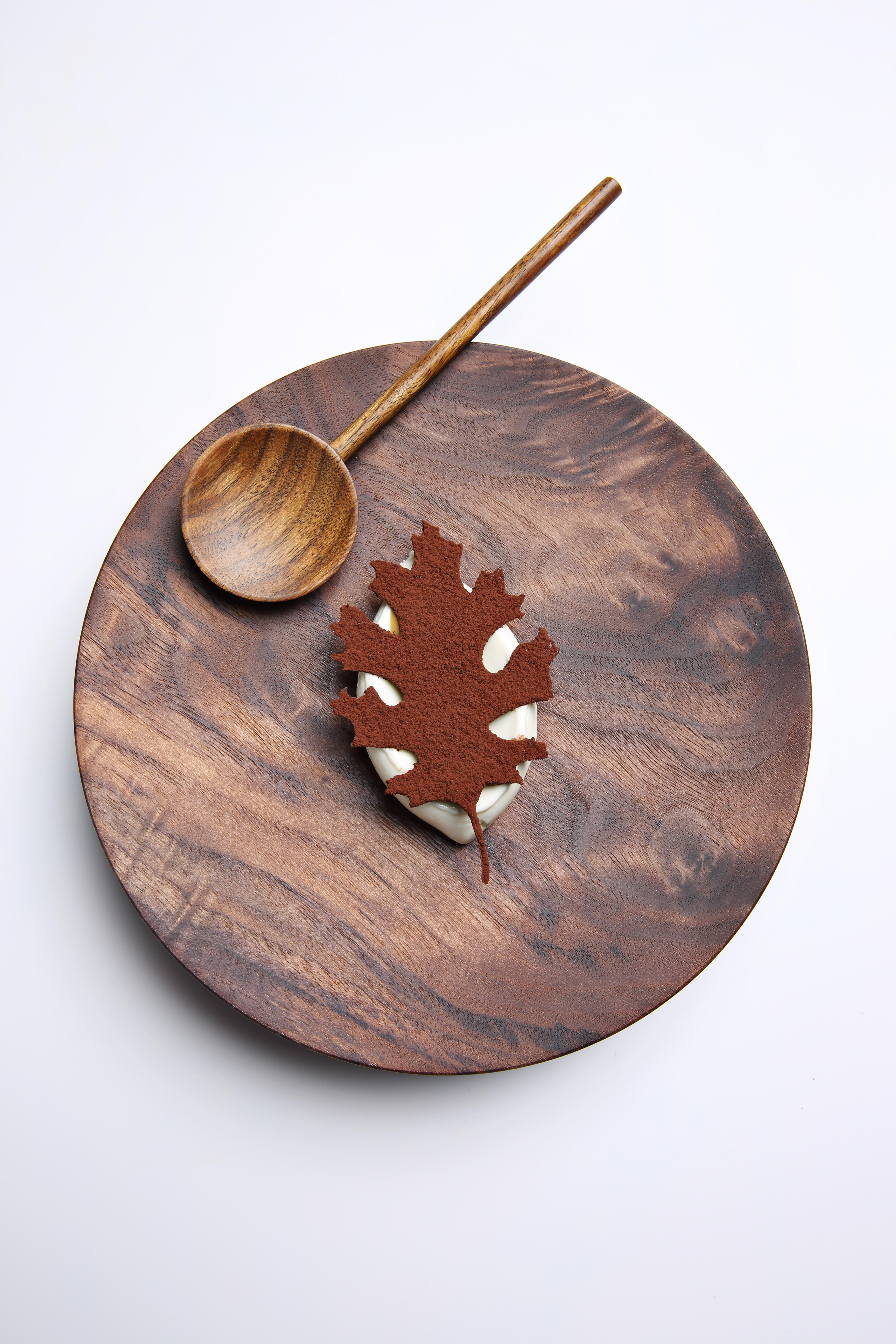 “Somni”, the Catalan word for dream, is Aitor Zabala’s newest restaurant venture with José Andrés. Aptly named, this space is the chefs’ wonderland, both in appearance and substance.

The space is dome-like, with ribbons of ivory marble and oak caressing the gentle curves of the room, which has no sharp angles or edges. A handful of rainbow-hued animal head sculptures by Spanish pop-surrealist artist, Okuda San Miguel, provide bursts of color to contrast the soft tones. In the center, a single crescent-shaped 10-seater exhibition-style counter facing the state-of-the-art kitchen commands the room.  No walls, no screens and no partitions – which means no room for error, but this is the way Zabala likes to cook.

Out of the open kitchen comes the 20-25 course tasting menu, a traditionally-rooted yet avant-garde take on a blend of Spanish and Californian cuisine, which draws inspiration from the kitchen team’s experiences in life, both past and present.

“Our style is modern with strong traditional influences, including flavors, classic dishes or memories from our past. But we’re also influenced by new experiences, from visiting countries with different cultures and styles of food.”

The dining experience at Somni is multi-sensory, where guests are encouraged to see, hear, taste and touch every aspect of their dining experience. For instance, many of the dishes are served without cutlery, intended to be eaten with your hands – cue the truffle-infused caviar served on top of a wooden mannequin hand, influenced by the time Zabala spent at El Bulli, the restaurant famous for the vessels in which it served its food.

Also an El Bulli alumnus is the other mind behind the Somni brainchild, José Andrés. The pair’s long-standing relationship began in 2010, when Zabala first joined Andrés’ ThinkFoodGroup team. Since then, Zabala became the culinary director at the company, helped Andrés with his “Science and Cooking” Course at Harvard and most recently, was personally selected by José to head the kitchen at Somni’s predecessor, SAAM.

Prior to joining forces with José, Zabala refined his trade training in several restaurants in Barcelona and San Sebastián, working his way up to head chef at Michelin-starred Alkimia. Thereafter, he joined El Bulli’s team as chef de partie where he worked under the great Ferran Adrià.

Zabala’s early culinary years were heavily influenced by distinguished Catalan and French chefs such as Michel Guerard, Michel Bras and Santi Santamaria. Only once he had gained sufficient experience and confidence in the industry, did Zabala begin forging his own culinary style, intertwining his humble beginnings with his new-found gastronomic characteristics.

“For sure I keep some things from my beginning because that’s my origin. I believe we are where we come from. For me, style is a process of time and knowledge and experiences.”

Interestingly, Zabala’s culinary “origins” started earlier than his formal career. His mother was a cook who owned her own restaurant in Basque Country, and although he never ventured into her kitchen whilst growing up, food was still a big part of his life. However, he only considered cooking as a career path when he left school and attended the army.

“Ever since I was a kid, food has always been an important part of my life and time spent with my family. But it was not until I joined the army and assigned to the kitchen that I did actually decide that it was something I wanted to do. I was 17 at that time. When I returned home from service, I had only one thought in my mind: to go to culinary school and become a cook.”

Nearly two decades later, Zabala has become a household name in the world of gastronomy, and even after all his success, Zabala’s culinary philosophy still remains simple: make good food. A philosophy which his team at Somni understands and shares with their head chef.

“Our culinary philosophy is to make good food. This is the first thing for us; after that we like to experiment, create, and research the best ways to make, serve and present this food to our guests. To translate this to a dish is not always easy, I’m so lucky to have a good team that understands this philosophy and is able to execute it.”

The conceptualization and execution of Somni, which opened in March 2018, was also a team effort. José and Aitor spent 5 years discussing, planning and building Somni, with each aspect of the restaurant being afforded the greatest attention to detail.

“We started developing the idea for Somni in 2013; by 2016 we were designing the space, finding silverware and other things; and began developing the menu about 6 months before opening. From the moment Somni opened until now, then menu has gradually evolved, replacing one dish at a time due to the season or the evolution of the ideas we want to present. So in the three months we have been open we have changed about 40% of our menu.”

“When designing the space, we thought of a tall ceiling, white oak and curved lines that would create a warm and welcoming feeling. The décor is very minimalist in that it does not take away from the dining experience but at the same time it is an organic complement to the dishes in front of you.”

The intimate and elegant space provides the perfect backdrop for an epicurean dining experience, and although all guests – most of which are usually strangers – share one table, the idea is that the experience should unite them. The open kitchen encourages guests to ask, see and partake wholly in the culinary experience – this involvement is, in Zabala’s opinion, the future of fine dining.

The dishes at Somni are certainly the center of attention, but the final product is a result of an intense dish development and testing process. Each plate’s creative journey is, however, a joint effort between the entire kitchen team.

“Beginning in the morning we collect ideas with the team, from products, techniques and other inspirations. We add these things into our folder of ideas. Next, we order the specific products and ingredients we have in mind and then we test the ideas… then, maybe the idea works, and we can start to develop a new dish, snack, dessert or cocktail.”

Once the dish is given the go-ahead, it is included in the tasting menu. Beginning with a welcome cocktail to refresh and cleanse the palate, followed by single bite snacks, a second cocktail, larger plates and finishing off with small sweets, the menu is a meticulously thought out culinary affair.

Of the dishes served at Somni, one of Zabala’s favorite it the potato croissant, as this best represents the essence of Somni and its team.

“This dish is an interpretation of a traditional dish from Catalonia where I’m from called ‘suquet de peix’, which is a stew made with fish and potatoes. We changed the shape of the potatoes into thin sheets that we form into a croissant served with a ‘latte’ made with fish broth. So this is who we are; we take traditional dishes from the past and we present them in a new way, creating another understanding with the flavors of the past.”

The produce used for the dishes at Somni is sourced mostly locally. For Zabala, it is important to communicate with merchants in the area, as this is the key to obtaining the best produce. The chef does, however, admit that when selecting produce, quality and authenticity of the ingredients is superior to the locality.

“We source locally and foster good communication with our farmers, producers and providers so we can have the best ingredients. However, we are open to discover any product from around the world that we can serve to our guests. Especially because our roots began in Spain, it’s important to source these products directly.”

With the restaurant having only been open for a few months, there is still room for growth and refinement of the concept, which Zabala welcomes with open arms.

“Right now, we’re just looking at smaller projects around the restaurant. With only four months since our opening, we still have much to learn and understand about the space, our guests, and our overall potential, before we can start thinking about bigger plans.”

If there is any city where a sophisticated space like Somni could reach its ultimate potential, it is Los Angeles. With the City of Angels quickly becoming a culinary hotspot, Somni has popped up in the right place, at just the right time.

“Here in Los Angeles, the fine dining scene is growing and we’re seeing more and more talented chefs and restaurants coming to the city. I think that’s a good thing for all of us – for the city, for people who like good food, and for other chefs. It adds more creativity and inspiration to keep pushing the boundaries further.”

Between dinner services and the hustle and bustle of the city life, Zabala still makes time for himself, squeezing in travel adventures abroad to explore new culinary cultures and get inspiration for his cooking.

“I just returned from Mexico, which is always such an inspiration for me and my food …and tomorrow, I am leaving for a one-week vacation to Hong Kong and Bali.  Hong Kong is one of my favorite cities in the world, where the food never disappoints and then I will explore Bali, where I’ve never been before.”

While back state-side, his leisure time is spent outdoors in nature with his partner: “I like to be active outside, working in my garden, hiking or foraging with my partner and then finishing up the day with cooking something simple for dinner, usually with ingredients picked from my garden.”