A Master of Basque Cuisine

Andoni Luis Aduriz is a new chapterin Basque cooking,” a Spanish, Madrid based,journalist tells me when I mention I aminterviewing him. “The Basque country hasalways been famous for its food and its chefsbut when Andoni appeared with Mugaritz, weknew this was something different.”

A photo of Andoni with the Basque greats of the previous generationgives an inkling of what this difference is. The previous generation ofBasque chefs, Arzak, Subijana and Berasategui (in whose kitchen
Andoni worked), look like the kind of men at whose tables you wouldhave a really good time, bon viveurs who know how to feed and behospitable. Andoni, small, unassuming, almost mouse-like, seems morelike a man who should be in a white lab coat at CERN in Switzerland,than a white chef’s jacket and running one of the best restaurants in theworld.

Listening to Andoni, I quickly realise why this quietly spoken but intensechef has become so important, has such influence and is regarded withsuch respect among chefs worldwide. During a telephone interview I askhim why he has been described in several Spanish articles as “one of themost disruptive chefs of his generation.” He laughs modestly and says:“Well, they say that. What I think they mean is that I challenge tradition.”

Spain has gone through a massive culinary revolution in the past20 years and looked at from afar it can seem that the whole countryluxuriates—despite the recent economic crisis—in a world of culinaryinnovation and progress. It can appear that la cocina nueva hascompletely triumphed in the minds and hearts of all gastronomicallyinclined Spaniards. What actually happens is that each development andeach innovation is hotly debated, analysed and disagreed upon. Manymodern Spaniards take their gastronomy as seriously as, and often morethan, art, culture or literature. Staunch gastronomic traditionalists feelthat chefs like Andoni are dangerous anarchists disregarding and castingaside all that is right and proper about Spanish food and traditionsand are paving the road to ruin. In fact the only thing guaranteed tohave Spanish voices more raised than an argument about food andgastronomy is one about politics.

“We had a project,” Andoni continues, “a few years ago that wasbased on the insipid. Normally the last thing a chef wants to do isdeliberately make dishes insipid but wewanted to look more closely at textures andwhat they mean, and the effect they have ontaste, so we promoted and pushed the ideaof insipid. What happened was that manytraditionalists found this diffi cult to understandand completely counter-intuitive. It causeda lot of debate.” Andoni is also a master ofunderstatement.

I point out to him that one of the most frequentand oldest criticisms levelled at Mugaritz is thatit isn’t a proper restaurant. “What we are not isa dining room,” he says. “People don’t comehere for lunch instead of a bar round the corner.Most of our clientele are from very far away andit’s obvious to me that a couple from SouthAfrica who have come specially from thereto a small place in the North of Spain are notcoming just for a straightforward lunch. I thinkof Mugaritz as a place where people come fora very specifi c experience and as part of thatexperience we give you food to eat.”

This philosophy of Andoni’s led to thehugely popular, and now widely copied, claypotatoes dish. You pick up what looks like awarm pebble that is strangely light and it turnsout to be a small boiled potato covered inclay. In your mouth the texture of the warmclay acts as a reminder of the earth that thepotatoes have grown in. The taste isn’t strong,it’s verging on insipid, but the textures and the
contrast between what the pebble you seeand the potato you eat does make you think. Itmakes you refl ect on the relationship betweenfood and earth, as well as on the nature ofearth and its changing form.

This, for Andoni, is the heart of what Mugaritz is about. He wants hisguests to come with all their life experiences and share a moment toreflect, enjoy and think via the food that they have. Having a customerenjoy a perfectly made soup is not what Andoni strives for, he wants youto share his life.

Listening to him talk I realise that, while I am always loathe to call chefsartists, as I believe very few of them are, Andoni has far more in commonwith an artist or a writer than he does with most chefs. unlike them he’snot satisfied with a guest enjoying his food, that is almost irrelevant tohim. What he wants is to transmit a sense of shared humanity, to connectwith people, to share the whole of the Mugaritz team, their travels, theirknowledge, their ideas, their thoughts. Dismissing this ambition with,“yes but in the end it’s only lunch” is to entirely miss the point. It’s alongthe same lines as dismissing a Jackson Pollock painting as nothing buta series of badly made drips.

I talked to Basque writer, and friend of Andoni’s, Harkaitz Cano, and heexplains to me that his conversations with any other chef are completelydifferent to the ones he has with Andoni. “When we meet it’s like talkingto another writer or artist, his concerns are cultural and philosophical. Heuses food the way I use writing, trying to tap into something greater thanhimself. We once had a long series of conversations about Italo Calvino’sSix Memos for the Next Millennium as he was trying to work out how toproduce those same ideas in food. What he does is amazingly brave andrisky. It doesn’t always work and can be very frustrating for him, but it isincredible that he even tries.”

After talking to both of them I am left with the feeling that the bestanalogy for a meal at Mugaritz is a visit to a Rothko exhibition, buta private viewing where you have the chance to sit and look at yourleisure and experience all the paintings fully. You sit at a table and youare on your own, with the whole team serving you while hoping you willunderstand them.

Drawing the interview to a close the last thing I asked Andoni was toexplain some of the ideas behind the recipes on the next few pages. “Theice scraping with aroma of red prawn essence is a journey into nostalgia.Almost all of us remember our first experience of sucking a prawn’s headand I wanted to re-create that but also have it cold, even freezing, like theice that the prawns are laid out on at the fishmongers. The frozen rose ofthe desert is a dish that you could say defines Mugaritz. It encapsulatesour travels, how we play with the unexpected, from temperatures totastes. Even the way we have constructed the dish, it doesn’t actuallylook like food, it’s supposed to make you really contemplate.”

With that we bid our goodbyes and I return to a friend’s restaurant andeat some giant roast lamb. I thoroughly enjoy it but what I really want todo is go to the Tate Modern and sit and look and think. 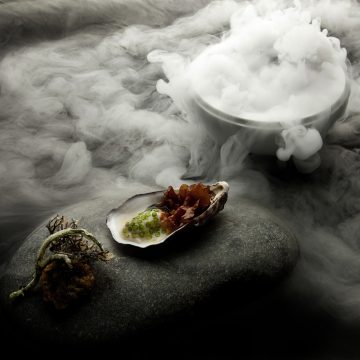 Eneko Atxa from restaurant Azurmendi tells us about his favourite ingredients…

EXCLUSIVE: The Making of FOUR’s International and Germany Winter 2014 Covers