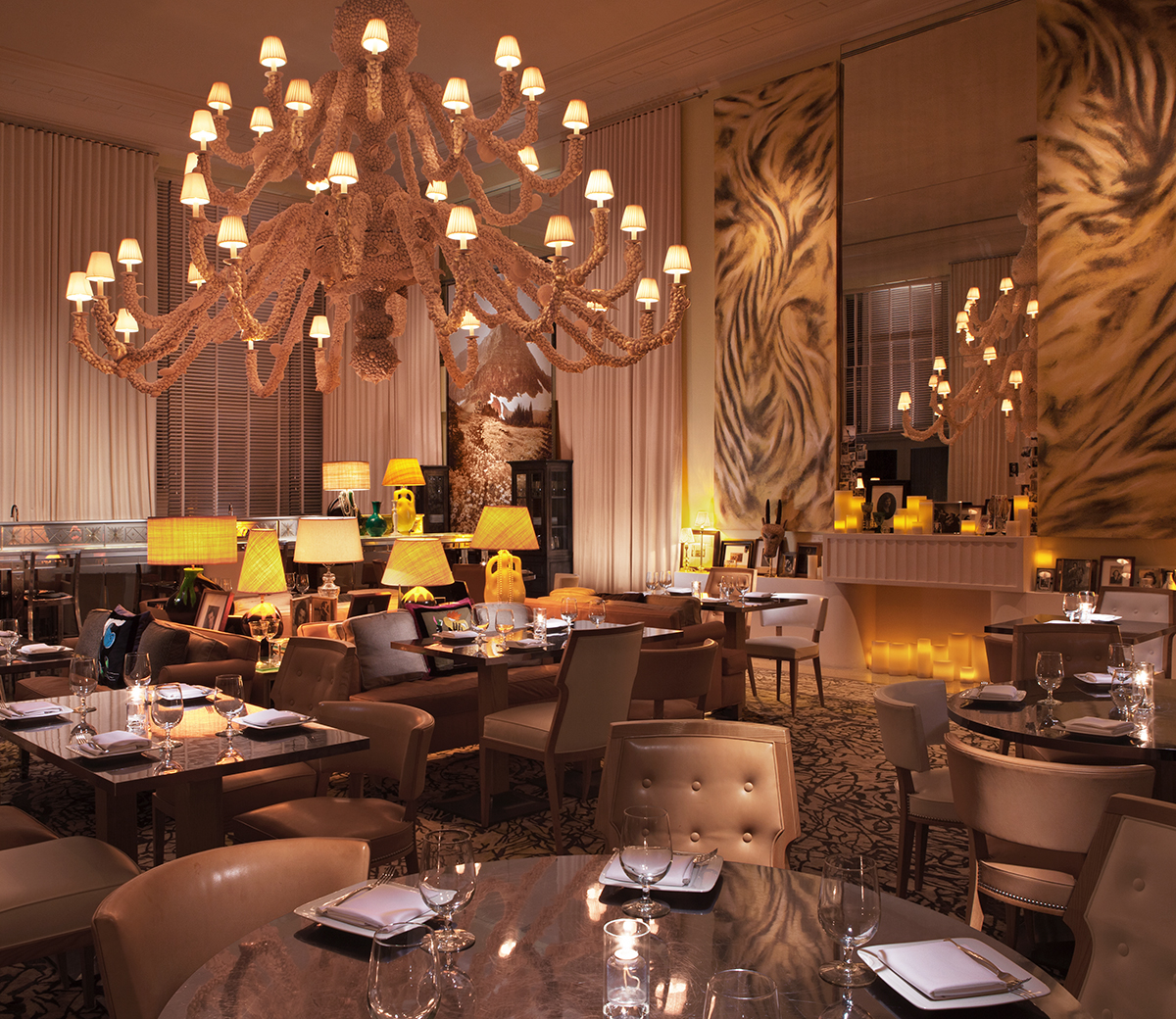 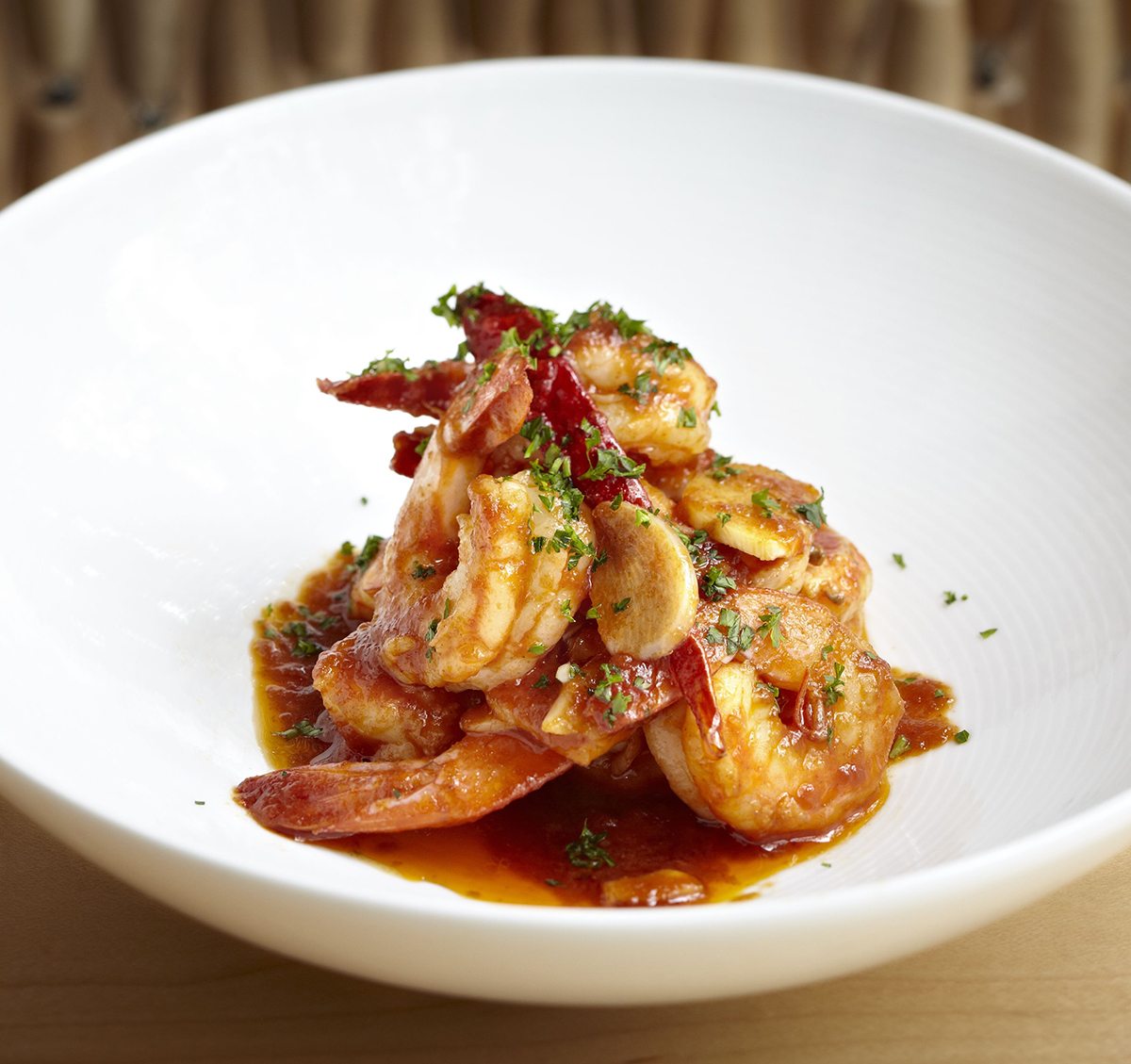 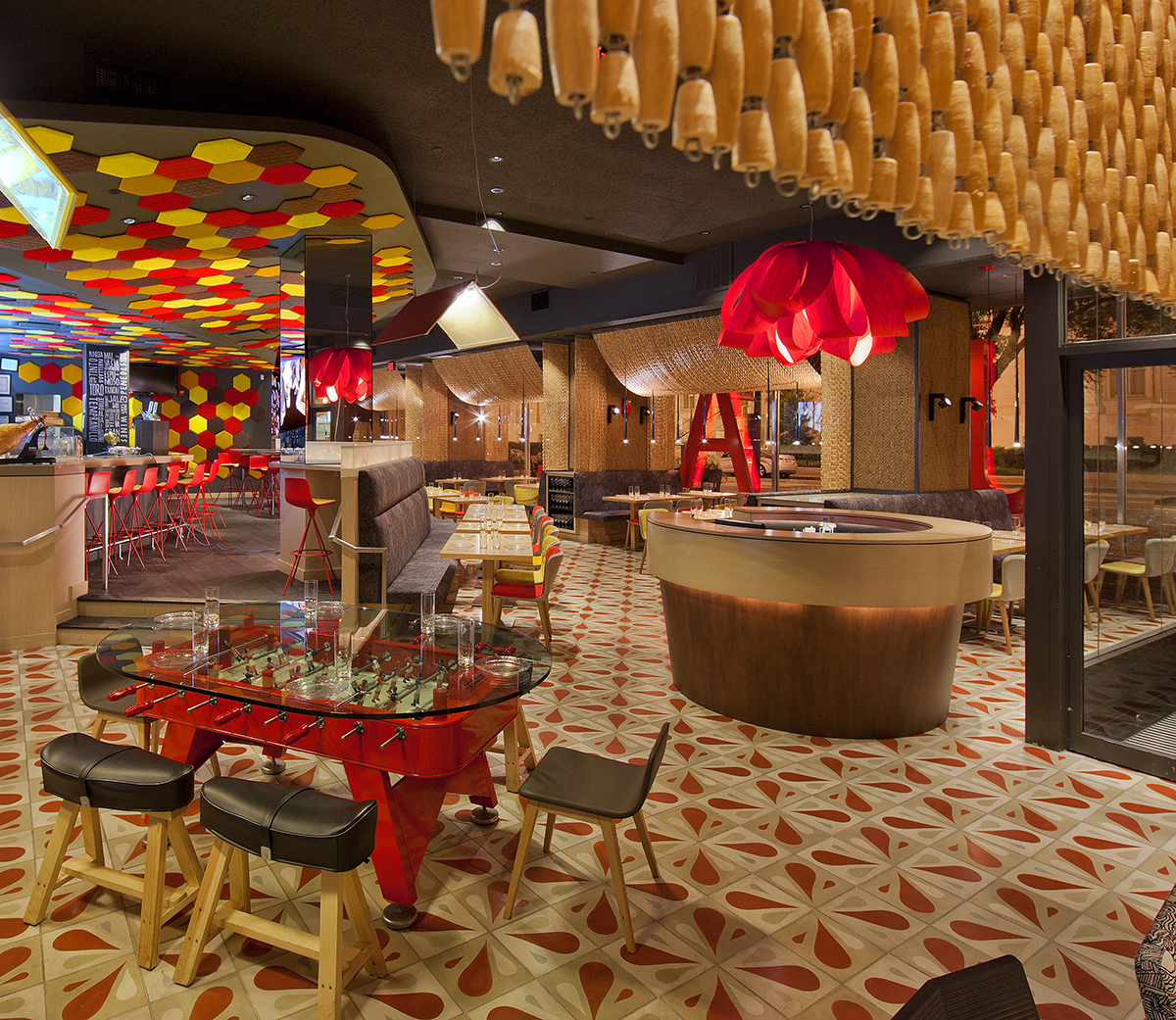 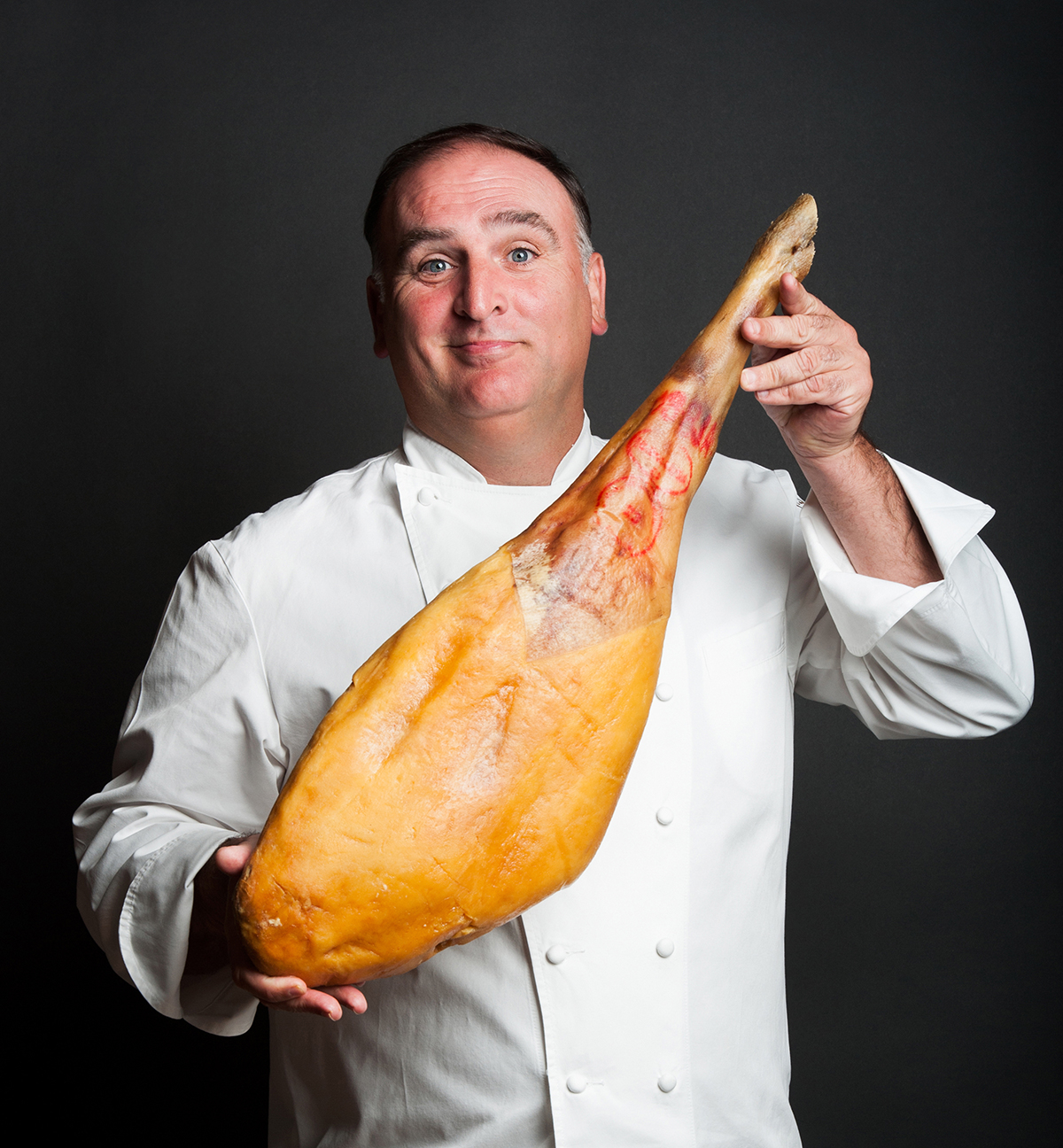 A Man Of Many Words

For José Andrés running a restaurant is about telling a story. A vision of tradition with the avant-garde has set the Spanish chef apart, writes Kerstin Kühn for FOUR USA…

“What I look for is the story that inspires the menu, the place and the experience,” José explains. “I root everything I do in a story, something authentic, which could be historical or personal, and then I have fun with it.”

A chef with a larger than life personality, an infectious laugh and a mischievous streak—he famously pushed Anthony Bourdain’s head into a crate of peaches telling him to ‘smell it’—José is one of the USA’s most celebrated chefs today. He is the country’s face of Spanish food, responsible for introducing Americans to tapas by successfully challenging their conventional ethos that anything but heaping portions would leave them unsatisfied.

Presented with the James Beard Foundation’s Outstanding Chef Award in 2011, José is a household name thanks to his numerous books and TV shows, and an impassioned food activist who considers his celebrity status a great responsibility, his growing empire of restaurants, which started with a single tapas bar in Washington, D.C., 20 years ago, now spans across the USA and Puerto Rico.

So what sets José Andrés apart? A disciple of iconic Spanish chef Ferran Adrià’s elBulli, José’s food combines tradition with the avant-garde. It showcases both the old and new of Spain’s rich gastronomic heritage by reinventing classic ideas to create innovative dishes that both educate and excite but never intimidate.

Take his Olives Two Ways, for instance. Served in two parts, it comprises a helping of traditional olives, stuffed with piquillo pepper and anchovy, as well as an entirely modern creation: translucent balls of liquefied olive that explode in the diner’s mouth. It’s a dish that not only seems simple but involves a great deal of effort and technique behind the scenes, it also perfectly illustrates José’s philosophy of marrying tradition with modernity while at the same time providing the diner with something that is fun and enjoyable. “My food is about reimagining familiar flavours to create a totally new experience,” he says. “As a chef this is my way to give you something unexpected and special.”

Growing up in Catalonia, in northern Spain, the world capital of avant-garde cuisine, José, inspired by the local food markets, decided early on in life that cooking was his destiny: “I always knew I wanted to be a chef because I couldn’t imagine doing anything else.” He attended the School of Restaurants and Hotels in Barcelona and trained at a number of Michelin-starred restaurants, most notably elBulli with now best friend Adrià, whom he describes as a ‘great mentor’. “Working at elBulli was like watching the big bang happening right in front of me,” he recalls. “We learned how to think beyond the ingredients in front of us and questioned why eating could not just feed our stomach, but also our brain and senses way beyond what we feel comfortable with. It had a big impact on me.”

In 1991, José came to the USA to help launch a short-lived Spanish-owned restaurant called El Dorado Petit in New York, before moving to Washington, D.C where he opened tapas bar Jaleo, together with now long-term business partner Rob Wilder and Roberto Alvarez. At the time, Spanish cuisine had virtually no presence in the USA, with few diners able to tell a croqueta from a tortilla, never mind grasp the concept of small sharing plates. “People didn’t know about tapas and the Spanish way of eating,” José recounts. “I remember I tried to explain to someone that I was opening a tapas bar but with my accent they understood ‘topless’ bar.”

Against the odds Jaleo was an instant hit with both critics and customers, prompting Wilder and Alvarez to hire José full-time to run the kitchen of Café Atlántico, an existing Latin Caribbean restaurant. From these humble beginnings, the chef started to inspire a whole generation of diners and chefs, alike. “When we opened Jaleo I was a young kid and I didn’t realise that I had this huge responsibility in setting the stage for what Spanish cooking would be,” José admits. “It didn’t happen overnight but soon what we were doing at Jaleo others were starting to replicate not just around the city but in other parts of the country, too. Now you see small plate concepts all over the USA but back then it was very different.”

In 2003, José used some of his own money to convert a corner of Café Atlántico into Minibar, a six-seat counter serving a menu of molecular gastronomy of the school of thought of his erstwhile mentor Adrià. The move put him in an elite group of chefs serving ground breaking dishes in the USA and saw his career skyrocket: he won the James Beard Award for the Best Mid-Atlantic Chef and became the host of a popular cooking show back in Spain, before hitting TV screens back in the USA. Before long, he renegotiated terms with Wilder to essentially take over the business and began expanding, initially across the Washington, D.C., area and then beyond, offering ever-different variations on the tapas theme. Today, his ThinkFoodGroup includes 16 restaurants in Washington, D.C., Los Angeles, Las Vegas, Miami and Puerto Rico, ranging from fine dining to a food truck, employing more than 1,000 people and generating revenues of about $100m (£62.3m).

Each of his restaurants tells a different story and through its design, atmosphere and food they offer a part of history that connects his native Spain with the rest of the world. There is Jaleo, a traditional tapas bar that is about life in Spain and José’s childhood; Zaytinya, which by serving small plates inspired by the Eastern Mediterranean, taps into the ancient history that links Spain with the Middle East; Oyamel, which specialises in antojitos, the Mexican version of tapas; and China Poblano, which showcases José’s take on Chinese and Mexican cuisines.

Meanwhile The Bazaar by José Andrés at the luxury SLS Hotel in Beverly Hills—arguably his most ambitious project—combines five venues in one: Bar Centro, with cocktails and raw bar and caviar offerings; the Patisserie with exquisite sweets under glass cloches giving a sense of a grown-up candy shop; Saam, an intimate room serving a 22-course tasting menu; and Rojo y Blanca, two separate dining spaces, one comprising a vibrant traditional tapas bar, the other a minimalist contemporary restaurant.

With such a diverse portfolio of restaurants, is there one that stands out or represents José better than others? “That’s like asking me to choose among my children,” the chef rebuffs. “But if you ask me where I go to be inspired, I’d say that’s Minibar, which is my creative nerve centre, the heart that keeps my team and me moving forward.”

He adds: “My culinary ethos is to always be hungry to learn because inspiration most often happens when you are working. You have to look at every opportunity as something to learn. You should understand how everything works within your restaurant, from before customers even walk through your door, until well after they have left; it’s important to see how it all works together.”

José’s most recent project is a new restaurant opening this winter at the Ritz-Carlton in Tysons Corner in Northern Virginia called America Eats Tavern. Modelled on a one-year pop-up the chef ran in collaboration with the National Archives, it explores and celebrate the USA’s gastronomic history, which he says is ‘incredibly rich and refined’. This new restaurant marks a step away from the food of José’s native Spain but like all his ventures it will tell a story—this time the story of his adopted home. And with José hinting at plans to open even further restaurants in the future, it seems there are yet more stories to come.

“Working at elBulli was like watching the big bang happening right in front of me. We learned how to think beyond the ingredients in front of us and questioned why eating could not just feed our stomach but also our brain and senses way beyond what we feel comfortable with. It had a big impact on me.”

Find out more about chef Andres and about #FOURUSA

Champion of promoting all things French in Hong Kong, Chef Benallal of Atelier Vivanda restaurant, spent FOURty seconds with us to tell us what he’s been up to…