1 apple, cut into fine cubes and blanched in apple juice

Cook tapioca in boiling water for 8 minutes, then let cool under cold water and mix with apple sauce and apple cubes. Season with salt, pepper, lime zest and lime juice.

With cling film, roll the apple tapioca into thin rolls and lightly freeze them. Tap the radishes dry and place on foil like scales. Take the tapioca and tightly roll it in cling film, knot and refrigerate. Lightly bind the radish marinade with gelatine and use to glaze the roll with it.

Strain the pasteurised egg white through a sieve, then fill into a bottle and slowly let it drop into 60-70C warm oil until it curdles. Stir repeatedly and strain the pearls. Then marinate the pearls in lemon oil with lemon pepper, lime zest and salt.

Mix everything together, season to taste and stir until the mixture is creamy. Roll the smoked eel filling in cling film to thin rolls, then lightly freeze. Spread the egg white pearls on cling film, cover the eel roll with it, then wrap again in cling film and refrigerate. Just before serving, roll in popped quinoa.

Put zest of lemon and lime, lemon grass, lime leaves and coriander in the Vitamix and mix very thoroughly. Then put into a bowl and mix well with salt, sugar, lemon- and olive oil. Put the char fillets in a form and cover with the mixture. Very tightly cover the form with cling film. Let the filets pickle in the fridge for about 8 hours. Then remove them from the pickle and keep cool until serving. Cut the marinated char into thin slices an marinate with the sesame-apple marinade.

Mix everything together, until you get a marinade.

Peel the apple, cut into round sticks and vacuum with sesame-apple marinade.

Place the chars onto cling film, marinate with sesame-apple marinade, add the apple, sprinkle with the mint and parsley julienne and tightly roll. While in the foil, let it cool thoroughly. Before serving, glaze with bound soy marinade.

Peel and seed the cucumber, finely mix in the Thermomix and pass through a fine sieve. For 200ml, add one gelatine leaf. Season to taste with salt, sugar and lime juice.

Place radish roll, tapioca roll and char roll from left to right on the plate. Serve the cucumber sauce separately for pouring.

Find out more about ChefJürgens 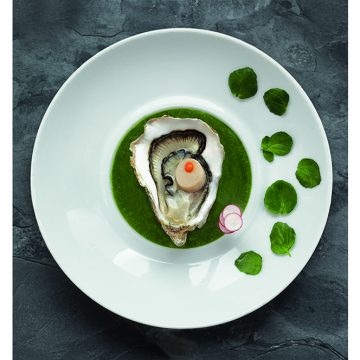 Gillardeau oysters and scallop with grated pink radish with horseradish

A light but incredibly satisfying recipe for crab kalamansi with cucumber and lemon mint from star chef, Curtis Duffy…Yum!