Tony Fleming gives us a recipe for seared scallop, slow cooked pork, and creamed cauliflower, keeping in line with a healthy frame of mind…

4 large scallops in the shell

Rub all ingredients into the pork belly and place in a vac pac bag, seal the bag so there is no air left inside and cook in a water bath at 72 degrees for 48 hours.Take the pork belly out of the bag and pull all the bones out, making sure all the cartilage is removed

Put the belly between two baking sheets and chill in the fridge with a substantial weight on top so the pork belly sits flat. Leave in the fridge for a minimum of six hours.When the pork belly has been pressed remove the skin with a knife and slice across the grain cutting a 1cm thick slice. Square the pork belly so it is a rectangle measuring 10cm by 4cm and refrigerate until needed.

Heat the butter in a heavy bottomed pan, add the sliced cauliflower a little salt and pepper and sweat gently without any colour for one minute. Add the milk and cook quickly until the cauliflower is soft and most of the milk has evaporated. Add the cream and boil for 1 minute.Blitz the puree in a blender until smooth and pass through a fine chinois, adjusting the seasoning and refrigerate until needed.

Slide a boning knife between the flat side of the scallop shell and the scallop keeping the knife close to the scallop ensuring no meat is left on the shell. With a spoon scrape the scallop from the shell. Place your thumb between the scallop meat and skirt. Work your way around being careful not to rip the scallop.Wash in a large bowl of cold water, checking there is no grit or membrane left. Pat dry on a clean cloth and refrigerate until needed.

Bring the stock to the boil and add the rest of the ingredients. Simmer for ten minutes skimming regularly. Pass through a fine chinois and reduce to sauce consistency. Pass through a muslin cloth and refrigerate until needed.

Bring all the ingredients to the boil and leave to steep for one hour. Refrigerate until needed.

Using a mandolin, slice the cauliflower 2mm thick and dress with extra virgin olive oil and a little salt, leave to one side.Warm up four large tablespoons of cauliflower puree in a small saucepan. Adjust the seasoning and consistency and put in a squeezey bottle and leave somewhere warm.Slice the scallop in half down the middle

In a hot cast iron pan colour four slices of pork belly on one side until they are a dark brown colour, add enough sauce into the pan to cover the pork belly half the way up, along with the raisins. Put in a pre-heated oven at 160 degrees for two minutes.While the pork belly is in the oven place the two halves of scallop into a hot cast iron pan with a little oil and season well so the flat side goes into the pan first.

When the scallop is golden brown, turn it over and add a knob of butter and a squeeze of lemon juice. Baste the scallop with the butter and cook until it is almost cooked. Remove from the pan and drain on a tray with a jay cloth on it.On four warm plates, smear the puree on the plate. Place the pork belly on top of this; scatter some of the raisins around with some of the sauce. Balance the two pieces of scallop on top of the pork belly with a slice of raw cauliflower dressed in olive oil. Finish with three pieces of coriander cress. 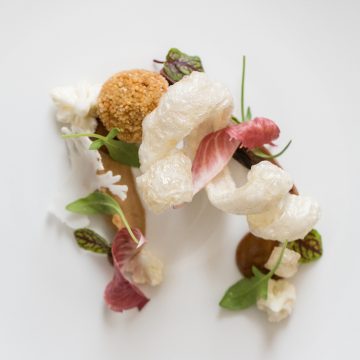 Chicago-based chef, Curtis Duffy, shows you how to make the best of pig tails with this splendid recipe…Enjoy! 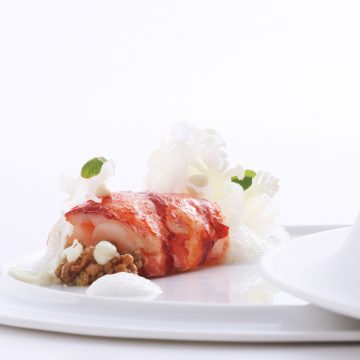 This recipe for Maine lobster with cauliflower, Makauy peppercorn and lobster sauce from Lanshu Chen is enough to brighten up any meal…Enjoy!

Get into the spirit of summer with this bbq-style Iberico pork recipe from three Michelin star chef, Thomas Bühner, of restaurant La Vie.