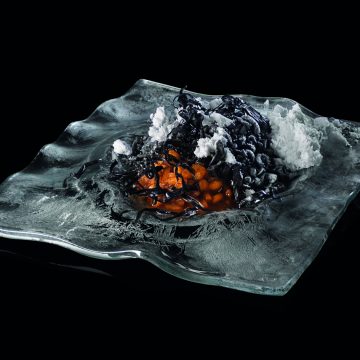 Onion, leek and horn of plenty

Onion, leek and horn of plenty

Arrange all the meat and chopped bones together with the onion, carrot, leek and tomatoes cut into mirepoix (small dice) on several Gastronorm trays. Brush everything with oil and toast in the oven at 160C for about 35 minutes. Meanwhile, bring the 20 litres of water to the boil in a tall stockpot. When the contents of the trays are well toasted, add to the stockpot and keep at a constant boil over a medium heat. Deglaze the trays with the soy sauce and a little water, and add this liquid to the stockpot together with the salt. This will make 15 litres of stock.

Toast all the meat and bones, except for the pig’s trotters, on several Gastronorm trays at 160C until golden-brown. Blanch the trotters starting from cold and drain. Meanwhile, in a stockpot lightly fry all the vegetables previously cut into mirepoix until golden-brown on all sides. Add the pig’s trotters and the toasted meat after draining off the excess fat. Deglaze the trays well with a little water and add this liquid to the pot. Add the remaining water and cook over a medium heat for 8 hours (bring to a boil, skim off any scum that rises to the surface of the pot, then keep at a simmer for 8 hours). Allow to rest for 3 hours after cooking. Strain and set aside.

Bring 60g of the black truffle juice to the boil together with the gelling agent and blend quickly. Remove from the heat, add the remaining truffle juice and mix well. Leave to set in a suitable mould. Set aside until finishing, then grate the truffle juice block with a Microplane.

Boil the water with the horn of plenty mushrooms, add the rice and cook over a medium heat, stirring constantly until the rice is overcooked and turns into a paste. Then add the chopped truffle and blend with the truffle juice in a liquidiser until smooth. Spread the mixture out on trays lined with waxed paper. Dry out in the oven at 46C for about 6 hours. Remove and grind using the pulse button on the Thermomix (do not allow it to become a very fine powder). Leave to stand, uncovered, at room temperature, at least overnight, then place in a strainer and fry at 186C in sunflower oil. Drain on paper towel and season with powdered salt. Keep warm until use.

Drain the livers as soon as they are delivered, then soak in a mixture of 30 g salt per litre of milk and refrigerate (at 3C) for at least 6 hours. Then, dry on paper towels and remove the central nerve separating the two lobes of each liver. Set aside.

Mix the water with the tapioca flour and the colouring. Bring to the boil, stirring constantly to form a paste. Cool in an ice bath, then blend with the truffle juice and the albumen powder. Leave to stand in the refrigerator for 6 hours, then beat in an electric mixer to make a meringue. Using a piping bag, pipe small balls on a tray lined with waxed paper. Bake at 120C for 1 hour, and then for 4 hours at 60C. Keep warm until use.

Combine both stocks and reduce to 1 litre. Gently cook the onion, leek and horn of plenty mushrooms base, then incorporate the rice. Stir a few times and moisten with the boiling stock. Cook over a medium heat for 10 minutes. Drain and plunge into iced water to stop the cooking process. Set aside. Just before finishing, add the right amount of stock to the required portions and cook until the rice is just done (about 5 minutes). Add a little freshly grated truffle during those 5 minutes to give even more intensity to the truffle flavour and aroma. Plate immediately.

Lightly grill the woodcock livers over orange wood at about 60 cm from the embers. The idea is to cook them slowly, infusing them with the aroma of orange wood and preventing the heat from causing them to coagulate too much. Cut each two woodcock livers to make four pieces per person, then place the four pieces in the bottom of a warmed plate to form a square. There should be a piece for every mouthful. Use a ring mould to plate the rice so that it covers the livers. Place grated mock truffle shavings, mixed with a little oil to prevent them from clumping, on one half of the circle. Place the crispy fried truffled rice on the other half circle. Add finely chopped truffle and arrange 1 truffle juice meringue on each half circle, as well as three shavings of freshly grated truffle. Serve immediately.