For 28 years chef Lampart has garnered one star in the Michelin Guide, Switzerland. He was awarded a second Michelin star for his own restaurant, Lampart’s, in December 2004 and has maintained 17 Gault Millaupoints since 2007.

Much to our delight, he shares two of his delicious recipes…

Place the vegetable stock, salt, turmeric, cinnamon, vanilla and star anise in a pan. Bring to the boil and pour over the couscous, then leave to swell.

Once the couscous has absorbed all of the liquid, add the olive oil and lemon juice, pistachios, pine nuts and raisins.

To prepare the salsify, cover it with milk and some saffron and cook until it becomes slightly softened.

Mix the red onion with sea salt, sugar, balsamic vinegar and olive oil and place in foil. Cook in the oven at 160°C for about 20 minutes.

Arrange couscous in the centre. Marinate vegetables with oil and white balsamic vinegar and place on the couscous.

Add Mizuna and watercress to the salad.

Soak 1/2 leaf of gelatine in cold water for 10 minutes, then, squeeze out the water and dissolve in the hot egg mixture. Whisk the mixture in a bowl submerged in ice water, until you get a pale, yellow foam.

Whisk the cream and carefully fold together with the vanilla seeds and Torrone sprinkles. Then add to the base.

Pour the parfait into the prepared hemispherical moulds and freeze.

Add chocolate chips according to taste.

Add Torrone crumble according to taste.

Take the frozen parfait out of the moulds. 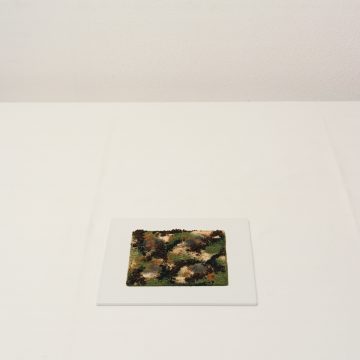