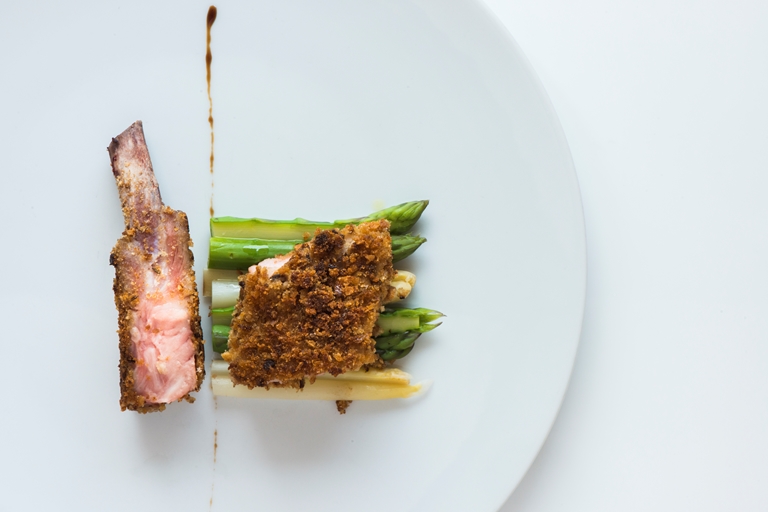 This mouth-watering dish from Giorgio and Gian Pietro sees Iberian pork ribs cooked sous vide, before coating in a satisfying mustard crust for a crispy finish.

Method
1 To make the pickling liquor for the white asparagus, in a small saucepan heat the vinegar, sugar and salt until dissolved. Take off the heat and set aside.
2 Cut the white asparagus in half lengthways and place them in an airtight container. Cover with the cooled pickling liquor and leave to marinate for 1 hour.
3 Blitz the flatbread to a crumb in a food processor. Mix through the mustard, olive oil and salt and pepper.
300g of flatbread, (preferably Schüttelbrot), toasted.
4 Preheat a water bath to 65°C.
5 Put the ribs in a vacuum bag along with a sprig of rosemary, seal in a chamber sealer and cook in the water bath for 45 minutes
6 Once ready, open the bag and cut the ribs into individual portions. Brush with mustard, roll them in breadcrumbs and cook in a pan with a little olive oil until golden.
7 In a saucepan of boiling water, blanch the green asparagus for 2 minutes and refresh in iced water.
8 To plate, place the asparagus spears on the plate with a rib on top and to the side.