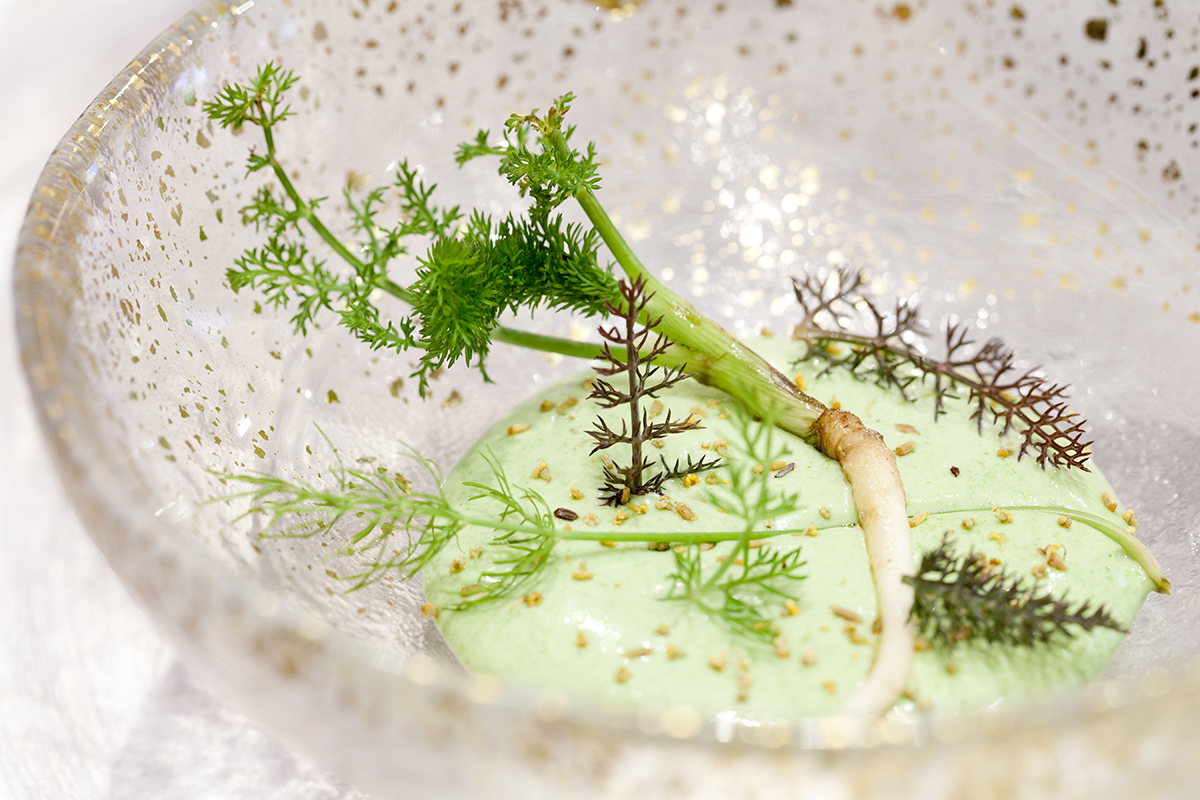 Farm-to-table enthusiast and Head Chef of Dos Brisas, Zachary Ladwig gives you a recipe for a Japanese-inspired Fennel Flan…

Salt and white pepper, to taste

Bring the Fennel Juice up to a quick simmer with the piece of bonito flake in it. Once the juice has come to a simmer lower the heat and allow the kombu and juice to steep at 170° F for 45 minutes. After the Fennel Juice has steeped with the kombu, add the bonito flakes and steep for another five minutes. Strain the infused fennel juice and season with the Tamari and Sake, allow to cool slightly, reserve 2 oz for garnish. Blend in the eggs into the remaining fennel dashi using an immersion hand blender. Reserve until serving time.

Steam the Razor Clams until they just begin to open (about 1 minute), allow to cool at room temperature. Zest one orange with a Swiss peeler and scrape all of the pith from the back side of it. Bring the zest up to a simmer three times from cold water. Each time the zest comes to a simmer strain and rinse thoroughly with cold water, return to a pot and repeat the process. Once the orange has been blanched to remove the bitterness dice the zest into 2mm squares, and dress in the citrus vinegar, orange oil, Texas tarragon, and salt & pepper.

Peel the fennel stalks and slice into thin coins. Blanch the coins in boiling salted water for 30seconds and refresh in ice water. Strain the chilled fennel coins and pat dry on paper towels, reserving for plating. Finely slice the razor clams on a bias and reserve until plating.

Heat whole milk and cream to 180°F. Steep the fennel bulb and fronds for 30 minutes and then strain. Immedi­ately place the fennel in an ice bath to cool. Reserve for the fennel cloud.

Combine fennel milk, egg yolks, and cornstarch and cook over a double boiler until all the starches have com­pletely cooked out. Blend custard with fennel fronds, honey, sea salt, and fennel pollen. Charge in an isi whip­ping can with two charges and reserve warm until needed.

Place 2 ounces of flan base in the serving dish and steam covered at 100° C in a combi oven or stove top steamer until just set, leaving the center a bit soft (about 5 minutes). Allow the flan to rest for two minutes while you mix together the shaved razor clams, and dressed orange zest, lightly coat the mix in reserved fennel dashi that has been thickened with light kuzu slurry. Spread this over the top of the flan. Cover the flan and rillette with the fennel cloud. Dress all of the garnish and lay over the top of the cloud, dust in fennel pollen and drizzle fruity olive oil around. Serve immediately.

River Perch, chlorophyll of fennel and gravy of shallot & bacon

Michelin maestro Jonnie Boer gives you a healthy and fresh recipe for you to try tonight…Yum!

Diego Hernandez creates amazing dishes in his restaurant Corazon De Tierra in the Guadalupe Valley. Try this recipe from his appearance at the Northcote during Nigel Haworth’s Obsession festival, to show British diners how Mexican food is changing.

Combining traditional Turkish cuisine with contemporary flare, Neolokal’s kitchen is headed up by Maksut Aşkar. He gives you a simple recipe from the restaurant’s menu…

Michelin starred chef, Steve Smith gives you a recipe for crab and smoked salmon salad with avocado, fennel and apple…