Put the dried goji berries into cold water and leave for 20 minutes or until soft. In a food processor blend the goji berries with water until smooth, adjust the colour by adding more goji berries or water. Mix the flour, water and lard by hand or in an electric mixer to make the dough, add in the goji berry sauce for colouring. After the dough is activated cut the dough into 10 pieces (10g each) and stretch with a rolling pin, ideally very thin, but so that it won’t break during wrapping or steaming. For the stuffing, mince the chicken thigh meat and shrimp meat, chop finely the shiitake mushroom and Chinese chives, mix well with the mince and potato starch and season with salt, sugar and chilli oil. When wrapping the dumpling, first take one sheet of the dough and put around 12g of the stuffing in the middle, fold the dough into half a sphere and seal the stuffing. Then pick up both ends of the seal and put them together in the middle. For cooking: put the dumplings onto a baking paper in a bamboo steamer and steam for 4 minutes. Meanwhile, heat some vegetable oil in a frying pan. When the dumplings have been steamed, put them in the frying pan and shallow fry for another 1 minute or until the bottom is browned.

Cut the scallops in half, horizontally, take two sheets of cling film and distribute the scallops evenly in the middle of the cling film. Using a small frying pan or flat surfaced hammer, thin out the scallops to make thin ‘scallop sheets’.Mix the flour with water by hand or in an electric mixer to make the dough. After the dough is activated cut it into 10 pieces (8g each) and stretch with a rolling pin to match the size of the scallop sheets, ideally the dough should be thin enough but won’t break during wrapping or steaming. Put the scallop sheets on top of the stretched dough. For the stuffing, mince the scampi, mix with potato starch and season with salt and sugar. Chop finely the gong choi, bamboo shoots and carrot and mix well with the minced and seasoned scampi. When wrapping the siu mai, first take one sheet of the scallop-­assembled dough and put around 12g of the stuffing in the middle, use a table knife and push the stuffing inside while constantly rotating the siu mai until it forms a cylinder. For cooking: put the siu mai onto a baking paper in a bamboo steamer and steam for 5 minutes.

Make the oil layer and water layer according to the ingredients listed above. After the dough is activated, stretch both layers into rectangles with a rolling pin and put the oil layer on top the water layer, stretch the resembled dough into a large rectangle and cut off the edges; Cut the rectangle into half and put one on top the other, stretch again to the same size and cut off the edges. Repeat the process three times, and finally stretch the dough into a 30cm square. Cut the dough into five strips (6cmx30cm each), spray some water on top and stack the 5 strips together. Press gently with the rolling pin and use your hand to roll the dough to form a cylinder. Afterwards slash the dough into 10 pieces (16g each) and stretch with a rolling pin to 10cm pastry sheets. For the stuffing, cut the mooli into strips and finely chop the pickled radish, in a sauce pan boil some water and put the mooli strips and pickled radish to boil for 1 minute, drain well and mix with potato starch, season with salt and sugar. Meanwhile finely chop the iberico ham and toast for about 5 minutes, then add into the seasoned mooli. When wrapping the puff, first take one sheet of the puff pastry and put 15g of the stuffing in the middle, slowly seal the stuffing in the middle to make a ball. Afterwards press the seal on the working surface and dip into egg whites, then sesame seeds (optional). In a small fryer heat the oil to 160C, gently put the puffs into the oil and deep fry for 3 minutes. 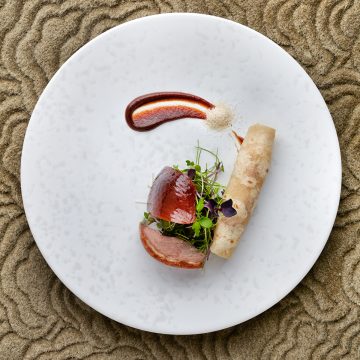