Any credible chef knows that seasonal produce is by far the best when it comes to making food worthy of accolades. Flavours are more intense, availability is guaranteed and it shows a chefs respect for his ingredients, and the impact his cuisine has on the environment.

AtFOUR – The World’s Best Food Magazine, we want to know what seasonal produce makes our chefs tick. We also ask them to share a recipe featuring their favourite seasonal produce, which will hopefully inspire you, our readers and fellow food enthusiasts, to go out and try it yourselves.

This week we askedBritish chef Richard Corrigan of Corrigan Restaurant:What is your favourite seasonal produce, and where do you source it from and why?

“Our guests come toCorrigan’s because of our confidence in using wild, foraged and sometimes unusual ingredients. We work closely with our suppliers and I only use farmers and fishermen that treat everything they do with pride.

We champion forgotten foods and the people that work tirelessly to support our native ingredients; a particular favourite of mine is British trout – especially Windermere Char.

Part of the trout family, this fish is ideal for cooking whole or simply pan fried. If I get the chance, I like to spend an afternoon on Lake Windermere and catch my own fish.”

1 whole sea trout, gutted, scaled, fins removed, head on or off whichever you prefer (ask yourfishmonger to do this)

a little vegetable oil, for frying

a squeeze of lemon juice

First make the butter sauce. Put the shallot into a heavy-based pan with the white wine and vinegar. Bubble up until the liquid has reduced to a glaze. Turn the heat down low and vigorously whisk in the butter, piece by piece. Season with salt and add lemon juice to taste. Pass through a sieve into a clean bowl and keep warm.

Preheat the oven to 220°C/Gas 7.Season the fish. Use the biggest roasting tray that will fit into your oven. Pour in a little vegetable oil, put the tray on the hob and when hot put in the fish. Colour it on both sides, then transfer the tray to the oven and cook for 20—25 minutes. To check whether the fish is ready, insert the tip of a small knife as far as the bone, withdraw it and check that it is hot.

Have a pan of boiling salted water ready, and just before you take the fish out of the oven, lower the coastal greens in. Cook for 1 minute, then drain in a colander, put into a warmed bowl and toss with the butter, black pepper, salt and a squeeze of lemon juice.

Transfer the fish to a big carving board or plate, cut into pieces and serve with the greens, a bowl of new potatoes, if you like, and the sauce separately.

Richard Corrigan is the chef-owner of Corrigan Restaurants which operates Bentley’s Oyster Bar & Grill and Corrigan’s Mayfair in London.

Brought up on a farm in County Meath, Ireland, Richard Corrigan was raised on wholesome, home-grown cooking. Using ingredients that he himself helped to cultivate alongside other members of his family, Richard’s upbringing is something which he firmly attributes his cooking style to and plays a vital role in the menus he crafts for his restaurants.

His approach is defined by his belief in good hospitality coupled with excellent food that is sourced as locally as possible, from individuals rather than large companies.

Richard spent four years cooking in the Netherlands before progressing to become head chef of Mulligan’s in Mayfair, London, and his first Michelin star was awarded when he was head chef of Stephen Bull’s Fulham Road London restaurant in 1994. He went on to open Lindsay House in Soho, London, and won a Michelin star there in 1997. Richard bought and refurbished Bentley’s Oyster Bar & Grill in 2005, an oyster and seafood restaurant just off Piccadilly.

In recent years Richard has prepared lunch at 10 Downing Street for Tony Blair and the King & Queen of Jordan, and been crowned winner of the Great British Menu no less than three times.

Richard also won the Great British Waste Menu special, airing to over seven million on BBC 1 and which culminated in a dinner at the House of Lords. Richard has appeared on our screens on Channel 4’s Cookery School – a 50 part series showcasing Richard’s talents as one of the best chefs in the world, Great British Food Revival, Full on Food, Something for The Weekend, Saturday Kitchen, Market Kitchen, UKTV, This Morning and The Wright Stuff and has hosted the Irish primetime television series, Corrigan Knows Food, one of Ireland’s most popular TV shows.

Most recently, Richard helped judge the BBC’s Great British Menu in aid of Comic Relief and is the leading representative of Slow Food.

Richard is the author of The Clatter of Forks and Spoons, a personal history of growing up in Ireland and recipes inspired by his rural upbringing.

The initiative aims to preserve Britain’s edible bio-diversity one product at a time, trying to raise awareness via various channels so that they can be rediscovered and returned to menus, markets, food festivals and shelves across the country. Slow Food’s CEO Catherine Gazzoli says “It’s so critical to raise awareness of amazing foods and their taste and history. It’s as simple as eat it or lose it – and we’ve already lost an awful lot.” 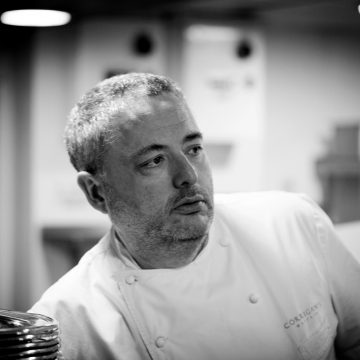 Illustrious Irish chef, Richard Corrigan is aveteran of the culinary trade and at the helm of the Slow Food Movement. He has opened numerous restaurants, gained Michelin stars, is the author of two recipe books, cooked for the Queen and regularly makes appearances on radio and television; notably winning Great British Menu three times. Richard

The summer is over and it is time for your interior to get dressed for the autumn/winter season. Here are Maxime Jacquet’s ultimate “coups de coeur” to have in your house for this season…