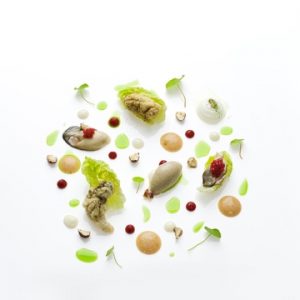 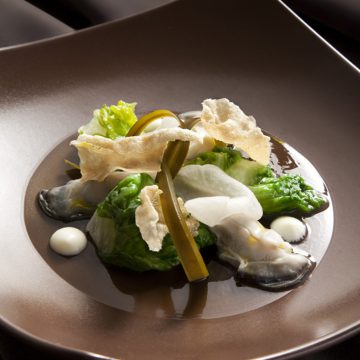 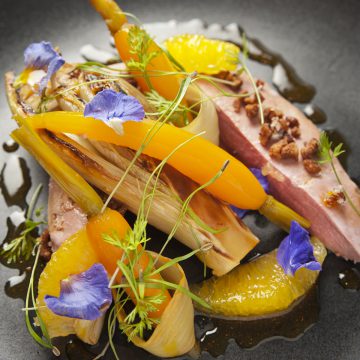 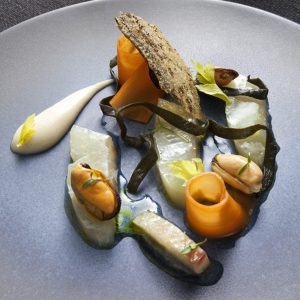 To celebrate the big day, we’ve put together an assortment of recipes from chefs who are either natives or residents to Ireland and who are all at the helm of fine-dining…

Celery leaf – 3 or 4 pieces of leaf per portion

Lay the first fillet on a board, flesh side up and score along both edges down to the skin. Turn the fish over and carefully pull the skin off the flesh, starting at the head end. Repeat with the other fillet. Trim the fish and set aside. Preheat an oven to 160*C.

Descale the skin with an old knife or fish scaler, then wash it under cold running water. Dry with kitchen paper then spread the skin out on a sheet of greaseproof paper on top of a baking sheet and brush with rapeseed oil. Put another sheet of greaseproof on top, and another tray, and place in the oven. Check after 15 minutes; the skin is ready when it is crispy and lightly coloured. Allow to cool in the trays and then break up into pieces roughly 5cm square.

Combine the lemon juice, lime juice, lemon puree, salt and sugar in a bowl, then whisk in the oil to emulsify.

Bring 300ml of salted water to the boil in a pan large enough to hold the mussels, with a tight-fitting lid. Add the mussels and put on the lid. Cook for 3 minutes, shaking the pan occasionally. Check to make sure the mussels have all opened, then drain in a colander. When cool enough to handle, take the mussels out of the shells and put in the fridge until needed.

With a sharp knife, cut slices of smoked haddock 5mm thick, three per portion, or around 80g. Lay the slices on a small tray and dress with two tablespoons of the lemon dressing. Leave to marinate for two minutes.

Pipe about a teaspoon of celeriac puree onto to the side of a serving plate and swipe with a spoon.

Place the haddock slices in the middle of the plate and scatter the mussels on and around the fish, then roll up two of the pickled carrot strips and put them on either side of the fish. Arrange the pickled seaweed on the plate and then spoon over some of the dressing. Finish with a piece of crispy skin and some of the celery leaves and coriander cress.

Start by removing the skin from the duck breast and place the skin in the freezer until solid.when. Wen Frozen cut in to cubes and render until crispy season,drain and set aside.

For the chicory line a cold pan with butter and sugar,then cut the chicory lengthways and place down into the pan and cook at a low temperature until it starts to caramelise then turn and deglaze with 250ml of orange juice.continue cooking until just cooked the stalk should begin to soften.Peel the bay carrots and cook in 250ml of each carrot and orange juice,some thyme and a pinch of sugar and salt until tender.

For the reduction. Reduce 500ml of carrot and 500ml of orange juice in a pan by two thirds.remove and pass into a small bowl then add the oil and sherry vinegar and season with a pinch of sugar.Set aside until needed.Segment the oranges and place in the fridge.For the duck glaze take 1 litre of the duck stock and reduce to a glaze .you can add flavours like star anais and a couple of juniper if you wish.

Take 2 litres of duck stock, garlic and thyme and place in a tall pan. Heat to about 65oc-70oc and season with salt.place the duck flat and cook for a about 8-10 mins turning half way.This will be medium rare by this stage so longer if you require it more cooked 12-15mins for medium and so on.take out a allow the meat to rest for about 10 mins.

Heat the carrots and chicory on a tray together

Reheat the duck breasts for about a minute in the stock, glaze and carve lengthways. Sprinkle on the duck skin from earlier.place onto a large plate and arrange the vegetables around the meat.take the segment and skater them on top. Use the coriander and dill to garnish and lastly drizzle the Carrot orange reduction around the edge of the plate.

130g smoked bacon – must be chilled

24 oysters, in their shells

Smoke the spaghetti in a smoker for half an hour – or until heavily smoked. When cool, crumble finely. Put the pork ribs into a pan and cover with cold water. Bring up to the boil and then drain the pork ribs and rinse under running water. Put into a clean pan with the leeks, white onion, watercress stalks and sugar, simmer for two hours, then pass off the stock and chill.

To clarify the stock; Whisk the egg whites with the bonito powder, seaweed, soy sauce and mirin, then add this to a large pan with the cold pork stock. Whisk together. Bring the stock slowly up to a very low simmer, until the egg solidifies on the surface of the stock. Remove from the heat and carefully strain the clarified stock through a double layer of muslin.

To set the jelly; measure out 500ml of stock. Put the gelatine in cold water and set aside for ten minutes. Bring the stock up to the boil and whisk in the agar agar, simmer for 2 minutes. Remove the pan from the heat and allow to cool slightly, then whisk in the gelatine. Pass the mixture through a fine chinois and pour an even amount into each of 8 serving bowls – we use a 25g portion.

Sweat the vegetables in olive oil for five minutes, then add the milk and simmer until veg is soft. Season and then add the oysters. Allow to cool, then puree and pass through a chinois. Thicken to a cream consistency with Thick and Easy then put in a squeezy bottle or pipng bag and chill.

Chill the food bowl of a blender in the freezer for half an hour, then use the blender to puree the chilled bacon and pass through a tami into a bowl. Rub together with the flour and salt, then transfer the mixture to a kitchen aid fitted with a paddle and add the Madeira and then the water, mixing well. Transfer the mixture to a clean bowl and wrap well with cling film, then steam in the preheated oven for an hour. Remove from the oven and allow to cool, then wrap in fresh cling film and chill in the fridge, preferably overnight. It will keep for 2 or 3 days like this, or it can be frozen for up to a month. When cold, slice in strips 1mm thick on a meat slicer – you need three per portion. Place on a tray in a dehydrater and dry for 20 minutes at around 70*C, until the crisps have the texture of semi-dried pasta. To serve, deep fry at 190*C until puffed up and golden – this will only take few seconds. Drain on kitchen paper.

Bring the vinegar to the boil with the salt, sugar and lemon zest. Allow the sugar to dissolve and then add the kelp. Simmer until the seaweed is cooked, then remove from the heat and allow to cool in the pickle. Chill before using.

2 heads baby gem lettuce, separated into leaves and rinsed. You need 3 or 4 pieces per person.

Bring a pan of water to the boil. Prepare a bowl of iced water. Blanch the lettuce in the boiling water for 30 seconds, or until wilted. Refresh in the iced water and drain when cold.

Vac the oysters and cook in a water bath for an hour at 63*C. Prepare an ice bath with 50% water and 50% ice, and cool the oyster completely in this. Remove from the shells and keep in the fridge until ready to use. (This part needs to be done no more than an hour or two before serving the dish)

On top of the smoked seaweed jelly arrange 3 of the cooked oysters. Dress 3 pieces of blanched lettuce in a bowl with a little pickled seaweed liquor, and place on the jelly with the oysters. Pipe three dots of oyster cream around the plate, and add some pieces of drained kelp. Finish with two pieces of white radish pickle and three bacon crisps.

Martijn Kajuiter may be a Dutch-native, but he’s been at the helm of Irish restaurant, The House at Cliff House Hotel since 2007. The restaurant makes the most of its homegrown seasonal produce, as well as local Irish ingredients.Unusual, perhaps,but this delicious recipe for oysters with guinness (of course), blackcurrant and hazelnut by Martijn Kajuiter is well worth a go. Find out the details.