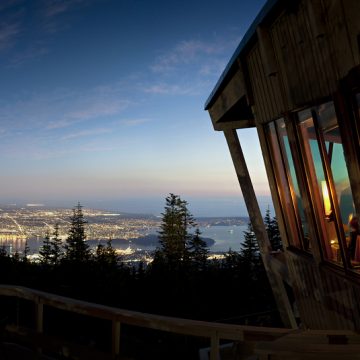 A metropolis of hip, chic, healthy and open-minded people and places. Surrounded by beautiful landscapes – sea, forest and mountains – it’s not surprising how sunny the Vancouverites are.

There are thriving art and music scenes, and quirky, cool neighbourhoods peppering the city with vibrancy. Prepare to have to loosen your belt a few notches because the rumours are true – Vancouver’s gourmet scene is gastronomical (sorry, we had to). And if a bit of fresh air is what you’re after, the majestic landscapes offer all sorts of activities, from extreme skiing to beach hopping.

If a light snack is what you’re after, Downtown Eastside is where street kitchens will dish you up the likes of tacos and tequila (Tacofino).

Having been votes one of the best cities for coffee in the world, Vancouver really doesn’t leave a lot of room for café sins. Kafka’s – to give one of many example – prides itself on its range of exceptional seasonal brews, whose source can be pinpointed by the staff on a map. Renowned for serving some of the city’s best roasts, it’s popular among its creative, arty locals.

Burdock and Co offer a self-confessed ‘rough-and-refined’ cuisine, which Chef Andrea Carlson sources with extreme care. Using only organic ingredients, the seasonal produce from local suppliers is complemented by a hand-picked selection of naturalist wine, craft beer and cocktails.

Located in Vancouver’s Dowtown Eastside, aims to bring two cultures together, creating ‘a marriage between East and West using premium ingredients from our backyard and beyond’. Executive chef’s global culinary experiences are reflected in the menu.

Standing up at the top of the Peak of Vancouver on the impressive Grouse Mountain, The Observatory is for the hedonistic epicureans out there. Using seasonal British Columbian produce, Chef Dennis Peckham certainly allows the food to live up to the spectacular view on offer.

After the never-ending list of things to do in Vancouver, we don’t doubt you’ll want to get off your feet and treat yourself to a bevvy (or 5). The Alibi Room – which deems itself a ‘modern tavern’ – advocates drinking well thought-out beverages only. Craft beers, boutique wine and creative cocktails are all self-named truths. Relaxed and cool are definitely the vibes in this Yaletown-based bar.

Cloud 9 at the Empire Landmark Hotel in Downtown Vancouver has been voted one of the best in the city for a poignant reason: it gives you 360 degree views by revolving (yes, as in turning) you slowly. Grab a cocktail and a window seat and you’re in for an imbibed treat.

Nothing says hedonism better that Reflections Lounge at the Rosewood Hotel Georgia, though. Only open in Spring and Summer, this outdoor bar was constructed to reflect a spa-like experience, with wonderful cocktails, an international wine list and premium spirits on offer.

Stay in the Fairmont Rim Hotel for the ultimate luxury sejours. Incredible, unobstructed views of the city’s mountains, the hotel sits on the ocean’s edge. 5 star rooms, rooftop pool, great cuisine; what more could you want? 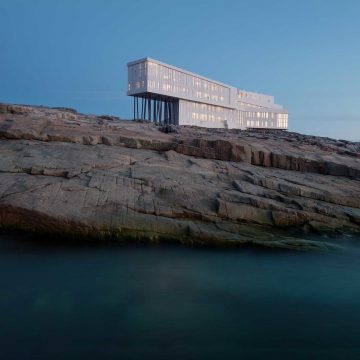 From a secluded Canadian getaway to a Madagascan paradise, FOUR whisks you away to the most beautiful ocean-side hotels in the world…

Jean-Georges Vongerichten offers you this treat for Madai sashimi on warm black truffle-garlic toast to set your week off to a good start…Yum!