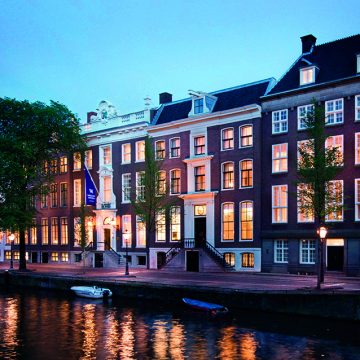 Holland’s capital has shrugged off its old stereotypes and, thanks to the city’s newest luxury hotel, thrives in a new age of decadence…

I’m always thrilled with excitement at the prospect of a trip to Amsterdam, a city I’ve visited half a dozen times since my rst in 1998. Less than an hour’s ight from London and a popular stop-o destination for long-haul travellers, my recent visit was to explore the city’s newest luxury hotel; the Waldorf Astoria Amsterdam and, of course, to catch up on the city’s museums.

Set in the designer post-code neighbourhood of Herengracht (known as the ‘Gentlemen’s Canal’), the Waldorf Astoria Amsterdam is made up of six 17th-century townhouses, which mask a rich history and 93 hotel rooms. The restoration of the townhouses has preserved the past, while complementing it with a neutral palette and timeless style, with reminders of the buildings’ history subtly threaded throughout. Rooms are named after former owner-inhabitants, such as the Backer Suite, for example, which is named after the Backer family, who commissioned building number 548 (the main entrance building of the hotel), and who were responsible for the 17th-century signature painted ceiling in the living room.

Arriving at a plush new hotel for the first time, I’m always intrigued to discover its quirks and just what makes it stand apart from the rest. As it turns out, the Waldorf Astoria Amsterdam has many luxury facets that make it unique, not just from other hotels, but from its sister properties, too. Shown to my room, I’m immediately presented with a collection of Cire Trudon house scents and asked to choose one. My choice, La Marquise (a light rose scent), is later delicately sprayed in my room during turndown service. The generous in-room facilities go a long way, too—the opportunity to enjoy a morning espresso while catching up on BBC World News from the luxury of a huge Salvatore Ferragamo-scented bubble bath, for example.

After a suitably lling breakfast of pastries,eggs, hams and cheeses, I leave the hotel to explore Amsterdam, boarding Nico Bax’s (of Classic Boat Dinners Amsterdam) restored classic canal boat right outside the hotel, headed for the city’s Museumplein. Complete with dreamy vintage wood panelling and complementary co ee and cake on board, I was kept thoroughly entertained during the 20-minute journey by Nico’s tales of his famous former guests (Jay-Z and Beyoncé included), while enjoying the passing scenery.

Arriving at the Museumplein, I was excited for what lay in store. My rst stop was the Rijksmuseum, theDutch national museum, which reopened to the publicin April 2013 following a 10-year restorative hiatus. The Rijksmuseum demonstrates the country’s in uence on the world of art like no other. Baroque, Rococo, Impressionist and Art Nouveau works are housed together, featuring masterpieces including Rembrandt’s The Night Watch, an iconic Van Gogh self-portrait and Vermeer’s The Milkmaid. Covering several oors and periods, no matter how many times you’ve visited the Rijksmuseum before, there is always something new to see.

I decided to explore the Hermitage Amsterdam next (a branch of the Hermitage Museum of Saint Petersburg, Russia) for its Dining with the Tsars exhibition, which took place earlier this year. There’s also The Van Gogh Museum and Stedelijk, the city’s modern art museum (both of which also reopened after major refurbishments in 2013), among many others.

Taking in as much of Amsterdam’s museums as one morning would allow, I’d built up an appetite and headed to Café-Restaurant de Plantage by the Hortus Botanicus (the city’s botanical gardens) for lunch.

If you’re in the mood to pick at a selection of small plates over a glass of wine, take a seat at the long marble bar and try some of the Middle Eastern-in uenced, tapas-style dishes, such as hummus, baba ghanoush and croquettes (bar sta also make a wickedly good gin and tonic!). The restaurant’s menu changes regularly and is lled with fresh and seasonal deliciousness, such as my choice—the eggplant carpaccio with organic pecorino, charmoula, pine nuts and at bread.

Afterwards, I decided to walk o lunch, taking in the canal-side streets and soaking up the city’s laidback vibe, before heading back to the hotel’s luxury Guerlain Spa. There, I tried a Radiance facial treatment, followed by 15 minutes well spent in the spa’s relaxation room, with herbal tea in hand, before getting ready for dinner.

When it comes to dining, the hotel’s guests are spoiled. The Waldorf Astoria Amsterdam’s executive chef is Sidney Schutte, who oversees Peacock Alley, where afternoon tea is served, Gold nch Brasserie, which opened in January 2015, and Librije’s Zusje Amsterdam. The latter shot to stardom—literally—within just months of opening.

I managed to squeeze in both Peacock Alley and Gold nch. As I discovered on my trip, it is essential to book Librije’s Zusje Amsterdam weeks, if not months, in advance. On the evening of my visit, we were told the restaurant had been fully booked for at least six weeks prior. And there’s little wonder, when just seven months after opening the restaurant scooped two Michelin stars in November 2014.

While Goldfinch offered an enjoyable and relaxed evening of good food and wine, it was the afternoon tea in Peacock Alley that really made its mark. Instead of o ering the usual sandwiches and cake, I was surprised and impressed by dishes such as the foie gras lollypop, tonka bean- avoured macaron and a di erent take on the Waldorf salad.

After dinner I couldn’t resist a cocktail in The Vault Bar, which still contains the bank vaults from the 1800s, placed there when the building was used as the former De Nederlandse Overzee Bank. The presence of the vaults doesn’t come across as gimmicky; in fact, they’re an interior designer’s dream and just like every part of this hotel, they tell a beautiful story of old Amsterdam.

There are some fabulously unique hotels in Amsterdam, but the Waldorf Astoria holds court as the city’s glitziest yet. The hotel, a museum in its own right, successfully manages the contrast between the busy comings and goings of its international guests with a peaceful calmness.

Before leaving for the airport, I take a wander around the hotel’s neighbourhood (known as ‘The Nines’), where a selection of the city’s best high-end independent shops, from cheesemongers, wine merchants and antique shops to lifestyle and fashion boutiques, can be found.

As I strolled across the Utrechtsestraat bridge, I was lucky enough to catch the sound of gypsy jazz ltering out from an old corner café-cum-bar and I smiled, as I’m once again reminded that I’m back in this deliciously fabled city.