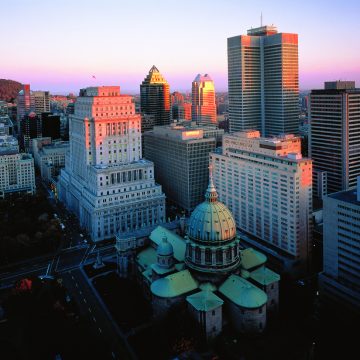 Sarah Gilbert explores the colourful city of Montreal, before travelling to Quebec City to discovers this wonderful region of Canada really is a city for all seasons, and a first-class dining scene to boot

As the zodiac bobbed up and down far from the shoreline, dolphins frolicked in our wake and we were surrounded by a boisterous group of sea lions. Then everyone squealed with delight as first one, then another humpback whale breached, almost dwarfing our small craft in an acrobatic display worthy of Cirque du Soleil.

I’d set sail from the village of Tadoussac, where the warm, fresh water of the Saguenay River collides with the frigid, saltwater of the St Lawrence River, churning up enormous volumes of krill and attracting a galaxy of leviathans during summer, including behemoth humpback and blue whales. Just some of Quebec’s many natural delights.

I’d begun my journey around Canada’s largest province in the cool, cosmopolitan metropolis of Montreal, a croissant-shaped island city, sitting in the middle of the St Lawrence River. A captivating mix of old and new, it’s the second largest French-speaking city in the world after Paris and plays host to eclectic festivals throughout the year, from comedy to cuisine.

Using the Fairmont The Queen Elizabeth as my base—famed for hosting one of John and Yoko’s bed-ins for peace in 1969, among other celebrity guests—I explored the reinvented Old Port area, filled with Montrealers cycling, jogging and powerwalking along the waterfront.

The beautifully-preserved cobblestone streets of Vieux Montreal were redolent of another age and at the Pointe-à-Callière, a museum of the city’s archaeology and history, I could imagine what it was like to live hundreds of years ago in a French colonial settlement, surviving both the frequent attacks from neighbouring Native Americans and the bitterly cold winters.

And the city is a genuine foodie melting pot, from wood-fired bagels at St-Viateur Bagel in Mile End (reputedly Montreal’s best) and quintessential poutine (essentially chips smothered in cheese curds and gravy), with around 30 calorie-laden but delicious varieties at the iconic La Banquise, to gourmet dining at chef Normand Laprise’s beloved Toqué.

At Little Italy’s Jean-Talon, one of the largest public markets in North America, the range of produce on offer is astounding, from smoked meats and preserves to sinful crêpes. Much of it comes from the bucolic region of Charlevoix. Sculpted millions of years ago by a 15 billion-ton meteorite, the valley over which the Laurentian Mountains soar is one of the few inhabited craters on the planet.

It’s also the birthplace of the world-renowned Cirque du Soleil and recently one of its co-founders Daniel Gauthier, brought his creativity, as well as many millions of dollars, to draw more visitors to his homeland.

First he bought a mountain, Le Massif de Charlevoix, Canada’s highest ski mountain east of the Rockies. Charlevoix’s other wintery delights include sledding, snowshoeing and ice kayaking, but part of Gauthier’s plan was to turn it into a year-round destination, so he restored the old railway line out of Quebec City that heads east to La Malbaie.

The train slowly rumbled past Montmorency Falls, a cascade of water that’s higher than Niagara; the towering neo-Romanesque Basilica of Sainte-Anne-de-Beaupré, and the picturesque village of Saint-Joachim, one of Canada’s earliest colonial settlements, dropping me at Baie-Saint-Paul station in the heart of Charlevoix, almost at the door of Le Germain Hotel.

Since the start, the hotel’s put the emphasis on collaboration with the community and local artisans made everything from handcrafted furniture to hand-loomed throws, and it’s home to a pastry shop that stocks everything from petits fours to elaborate pièces montées, just a taste of what the region has to offer.

Early the following morning, I clambered into a motorcycle sidecar for a bigger bite of the Flavour Trail and an exhilarating journey along Charlevoix’s snaking roads, where the fertile valleys were topped by cobalt-blue skies, flanked with evergreen slopes and dotted with vineyards and quaint clapboard buildings housing smokehouses, bijoux cheese makers and artisan bakers.

There are over 20 producers along the route and my first stop was unexpected; an emu farm, where I nibbled on the gamey, protein-rich meat and rubbed emu oil—which allegedly cures everything from wrinkles to joint pain—on my skin. Equally unexpected was organic tomato wine brewed from six varieties of heirloom tomatoes, which pairs perfectly with local favourites such as strong cheese, foie gras and seafood.

Back at Le Germain, I had time for a leisurely soak under a star-studded sky in the Spa du Verger’s al fresco hot pool, before I found a cosy spot in front of the lounge’s log fire and savoured a glass of Premices d’Avril, the local maple wine.

In Les Labours restaurant, I perched on a stool around the open kitchen and watched the chefs hard at work, conjuring up a gourmet take on poutine, with fingerling potatoes in place of chips, and a generous slab of organic foie gras­—­­made according to age-old Basque techniques in the nearby village of Saint-Urbain—replacing cheese curds. I followed it with local rainbow trout and washed it all down with some flavourful micro-brewed beer from Baie-Saint-Paul.

The return journey to Québec City was as leisurely as the first, with the low afternoon sun glinting off the river. The province’s enchanting Francophone capital is one of the oldest cities in North America and its name stems from the Algonquin word ‘kébec’, meaning ‘where the river narrows’. It was colonised by the French in 1608, and even though it was surrendered to the British in 1759, the Québécois, its fiercely patriotic residents, have spent more than 400 years striving to preserve their heritage and language.

As I explored inside the fortified walls of Old Québec the French influence was obvious: horse-drawn calèche clattered down the cobbled streets, lined with boulangeries, patisseries, cafés and shops selling maple syrup, pear ice wine, artisan chocolate and more.

To work off this multitude of gastronomic delights, I walked along the Governors’ Promenade, a scenic boardwalk that hugs the cliffs overlooking the river, and climbed the long staircase up to the vast, green expanse of the Plains of Abraham for panoramic views over the city.

Looking back, I could see the fairy tale turrets of the Fairmont Le Château Frontenac towering over the city. It opened as a hotel in 1893 and over the years it’s accumulated a star-studded guest book, including Queen Elizabeth II and Princess Grace of Monaco. It’s also garnered the accolade of being the most photographed hotel in North America.

That evening, I sampled a bespoke cocktail conjured up by the resident French mixologist at Bistro Le Sam before tucking into chef Stéphane Modat’s cutting-edge new Québec cuisine at restaurant Champlain: snow crab from a local fishery, charcuterie and prime beef from Charlevoix, Yukon Gold potatoes, regional cheeses, all rounded off with indulgent chocolate and maple cream dessert.

From the restaurant ceiling hangs an artist’s golden representation of the St Lawrence’s many twists and bends. From the hotel’s terrace, I gazed out over the river. Passenger ferries plied up and down instead of whales, electric lights twinkled instead of stars, but from my vantage point it looked no less magnificent.