The Time Piece of Golf

Legends Watches – The Spirit of Champions. A Piece of Golfing History on your Wrist.

Legends Watches from Jaermann & Stübi are much more than just fine timepieces. They are authentic witnesses of great moment

Each watch is crafted using the clubs of champion golfers and can be linked to one of the irons used by great names to win major tournaments. Currently, these champions are Seve Ballesteros, Nick Faldo and Ben Crenshaw. Other legendary golfers will follow. All watches have one thing in common: a Legends Watch is an exclusive piece of golfing history developed alongside the legend whose name it bears.

The models are produced in strictly limited editions. Their authenticity is confirmed by Jaermann & Stübi by means of a certificate that also includes the signature of the respective golfer.

For Seve Ballesteros, there was no such thing as an impossible shot. A brilliant short game and a lot of passion were what built his legendary reputation. His winning irons from the 1995 Spanish Open, as well as from the 1991 Chunichi Crowns Open, are the basis for the Seve Ballesteros models I and II.

At the age of 20, Nick Faldo was the youngest player of all time to qua- lify for the Ryder Cup. He held the top spot in the world rankings for 98 weeks. Moreover, in 2009 he was knighted by Queen Elizabeth II for his services to golf.

1997, Golf World Cup Melbourne.Ben Crenshaw is the first player to score 13 under par in Melbourne and wins the tournament together with Marc McCumber.

Ben Crenshaw is considered a gentleman and one of the best putters in the history of golf. Very few people have won as many titles as “Gentle Ben”. He took top honours at the National Collegiate Athletic Association tournament three times in succession. On the PGA Tour, he also claimed no fewer than 19 titles.

To produce a precision watch from the irons of champions, Jaermann & Stübi developed a multistage process with the best metallurgy specialists. It begins with an exact analysis of the club heads. The goal is to find the perfect alloy for each iron to create a cavity-free cast. This involves many tests. Only once these tests have been completed can the clubs be apportioned and melted – a process in which electrical values, temperature and pressure have to be just right.

The alloys gained from melting form the basis for the casts from which watch cases are forged. At this point in the process, it is ensured that each watch can be assigned to a specific club before the final act takes place: with a great deal of meticulous precision work, the definitive shape of the stainless steel case is produced from the case blank.

Finally, the case is equipped with a newly developed and very robust calibre A10-2 mechanism. It is borne by 25 rubies, belongs to the chronometer class and is also protected by a patent-pending shock absorber that we developed and tested with professional golf players.

A Moment in Horological History

Ariel Adams reveals why the tourbillon movement still reigns supreme in the world of watches. As seen in FOUR International’s Luxury supplement… 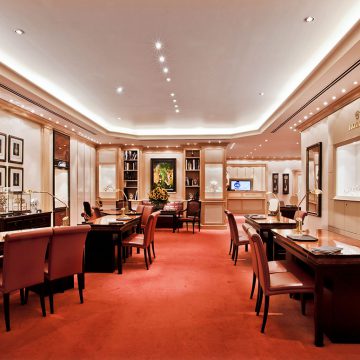 Wempe: the makers of exquisite timepieces and jewellery