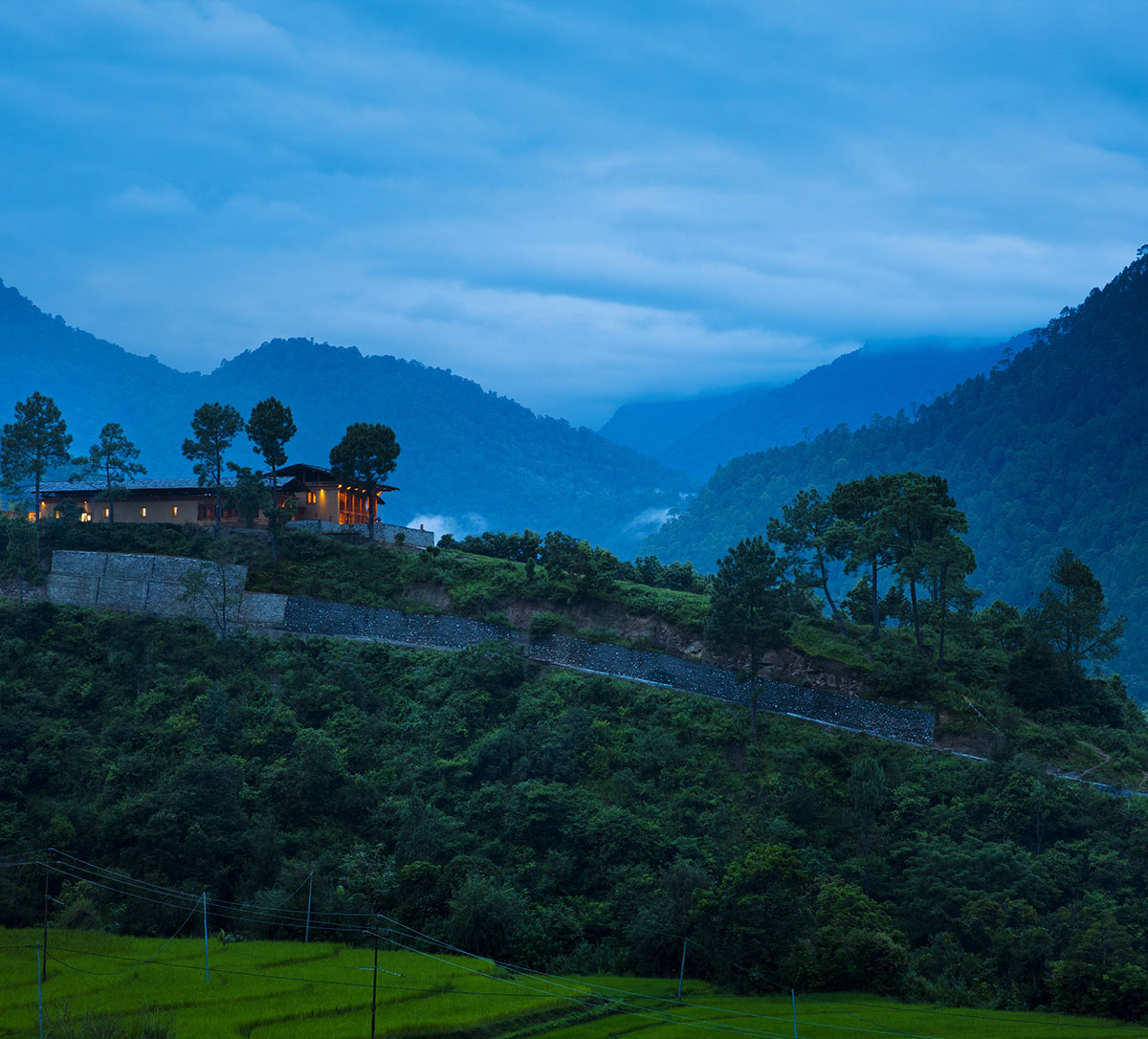 Bhutan is a strikingly beautiful country. And thanks to more relaxed borders, the country is no longer shrouded in secrecy, as Thomas Whitehead discovers.

The Kingdom of Bhutan was, by and large, a mystery to the outside world until 1974, when the borders came down and outsiders were allowed entry into the country. Before 1974, unless you were from India or Bangladesh, the country was off-limits.

With a strong sense of identity, culture and tradition in tact, few outside influences are visible today, making Bhutan the ideal destination to escape the stresses of modern life.

Travel to Bhutan has progressed slowly since the 1970s. Paro airport is serviced by one airline, Drukair, which connects travellers toThailand, Singapore, India, Nepal and Bangladesh. Travellers must first fly to one of these destinations before taking a connecting flight into the country.

The flight between Paro and Kathmandu is said to be one of the most exciting in the world, as the aircraft passes over four of the five highest mountains in the world. In fine weather, passengers can enjoy spectacular views of Mount Everest, Lhotse, Makalu and Kangchenjunga.

Without a rail system in place, the transportation system within Bhutan is even more sluggish, although plans are in place to build one.

Visitors to Bhutan, with the exception of Indian and Bangladeshi residents, are required to stump up a daily fee to the government, usually paid through the tour operator. Since opening its doors to the outside world, Bhutan’s tourism policy has taken a cautious approach to growth, with the Tourism Council of Bhutan seeking to ensure that the number of tourists admitted to Bhutan are well within the capacity of the country’s socio-cultural and natural environment, to absorb visitors without negative impact.

All tourists must visit the country with an ‘all-inclusive’ package, which covers accommodation in at least three-starhotels, meals, transport within the country and services of a professional guide.

This, for some, is part of Bhutan’s appeal. It prohibits cash-poor, hostel-seeking backpackers, instead attracting cash-rich, luxury seekers. Those who are willing to hand over the daily fee are not left disappointed. The landscape of Bhutan is dramatic and varied. From mountains and valleys to rice fields and plunging gorges, the landlocked country offers some of the most inspiring landscapes in the world.

Bhutan can be divided into three zones: the alpine zone, with no forest cover; the temperate zone, with conifer and broadleaf forests and the subtropical zone. The diversity of the country’s ecosystem welcoming an incredible mix of wildlife, with a wealth of species to look out for, or avoid, depending on your point of view.

With large designated natural parks, includingBlack Mountain and Jigme Dorji,the two largest, Bhutan is protective over its nature and natural beauty. The country’s wildlife is not for the faint-hearted, with tigers, rhinos, elephants, Himalayan black bears, leopards, red pandas and wild pigs, among many others species, inhabiting the national parks and wildlife sanctuaries. Home to over 670 species of birds, Bhutan is also a paradise for bird enthusiasts.

The country’s scattering of traditional architecture is synonymous with its Buddhist heritage—traditional and filled with wooden fortresses, monasteries and temples.

The famous Paro Taktsang monastery, built in 1692 and located in the upper Paro valley, is among one of the most famous in the world due to its eye-watering, cliff-side location. Legend has it that Guru Padmasambhava, credited with introducing Buddhism to Bhutan, meditated in the caves here for three years, three months, three weeks, three days and three hours in the eighth century.

Another notable landmark building in Bhutan is Punakha dzong, known in ancient times as the Druk Pungthang Dechhen Phrodang or ‘The Palace of Great Happiness’. It is the second oldest dzong in Bhutan and was the location of Bhutanese parliament until 1955, when the capital moved from Punakha to Thimphu. Throughout its life, Punakha dzong has suffered a number of fires, floods and earthquakes and is currently used as the winter home of the Je Khenpo, Bhutan’s religious leader.

The medieval market square in Paro Valley allows visitors to explore local artefacts, while trying out Bhutanese curry and other traditional dishes, such as the fiery national dish, chilli cheese, known as ema datshi.

Thimphu weekend market offers another treat for the senses. A gathering of locals and valley-dwellers dressed in traditional dress—ghos for the men and an ankle-length dress, known as a kira, for the women—congregating to buy and sell local foods, handicrafts and textiles, with some very intriguing items up for grabs, including human thigh bone trumpets.

The Bhutanese diet mainly consists of rice and meat, including yak, chicken, mutton, pork and beef. Rice, buckwheat and maize are the most prominent produce from the land, while chillies are a popular addition to many Bhutanese recipes, used as a vegetable and not just to add flavour to a dish.

When visitors have had their fill of the sights and local delicacies, it’s time to experience Bhutan’s offering of pristine five-star hotels. Luxury properties have sprung up across the country in recent years, with Como Hotels opening their second property, Uma by COMO, Punakha, in October 2012, joining Uma by COMO, Paro.

Uma by COMO, Punakha, is located on a hillside in the Punakha Valley. The exclusive retreat features 11 guest rooms, each one filled with handmade local crafts and furniture. The hotel’s organic garden provides the kitchens with the self-sufficiency of a remote palace and the bulk of the produce required to serve the hotel’s hungry guests.

The hotel’s COMO Shambhala spa offers a full range of holistic and eastern-inspired treatments, while guests can also indulge in the large indoor pool with sundeck, steam rooms, gym and yoga studio.

Guests at COMO’s Paro hotel can also take advantage of a range of activities, from yoga to Himalayan camping adventures, while the restaurant, Bukhari, is a firm favourite with the Bhutanese Royals.

The Taj Tashi, in Thimphu, is another noteworthy hotel. With 66 rooms, striking views and a good culinary offering of Bhutanese, Tibetan and European dishes available in the four restaurants.

The Taj Tashi is also equipped with a spa, although if you’re looking for a more naturally holistic experience in Bhutan, pay a visit to one of the many hot springs, used for centuries by Bhutanese people to cure ailments, such as arthritis and body aches. Known as ‘tshachus,’ the hot springs in Gasa, western Bhutan, are situated close to the banks of the Mo Chu River. The Gasa hot springs are frequented not just by locals but even wild animals such as the takin.

At first, when considering a trip to Bhutan, it might seem a little daunting, mind-bogglingly restrictive, even, to access the country. However, once there, the combination of the transfixing landscape; the Buddhist references etched into every piece of architecture and the colourful traditions celebrated by the people of Bhutan, make a visit to the country a once-in-a-lifetime experience and worth the effort required to arrange the trip.

Bhutan’s tourism policy has taken a cautious approach to growth, with the Tourism Council of Bhutan seeking to ensure that the number of tourists admitted to Bhutan are well within the capacity of the country’s socio-cultural and natural environment.