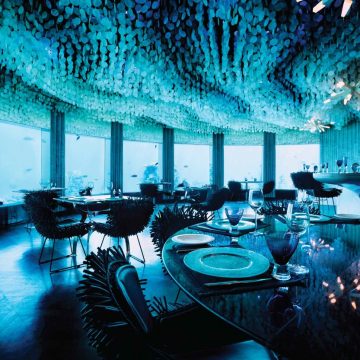 “It all starts with the food”

Interior design is not often something that the average diners concern themselves with in great detail. Surely food, service and good company play a much bigger role when it comes to dining. And yet it cannot be overstated how important design aspects are for the atmosphere and subsequently the enjoyment of a dining experience. Because no other aspect than the design is responsible for you hearing the fellow diner you’re having a conversation with, or for being able to see the vibrant colours on your plate, or even for having enough space for your food on the table. You might not be able to remember the colour of the leather you sat on or even the tabletop, but it’s the overall experience that benefits hugely from the right decisions that the interior designers have made during conception.

For many restaurant designers, it all starts with the food. Creative director at London’s David Collins Studio, Simon Rawlings, puts it like this: “You have to understand the food first and foremost. The environment has to suit the food. But that doesn’t mean if you serve French food you have to have a really fancy French room. If there’s exquisite detail in the food then there should be exquisite detail in the way the room is put together.”

Therefore, before any ideas are put forward by the designers, it certainly helps to completely understand the food concept and the vision of the chef or operator of the restaurant. Rawlings explains: “When we designed Nobu, for example, because a lot of the plates are for sharing, it is very important that the tables are rectangular with the narrow side facing the customer so there’s a larger space in the middle and all the plates that you’re sharing have room in the centre of the table.” It’s the clarity of vision in these early stages that makes some restaurants more successful than others in the long run.

In his new Brussels bistro SAN, two Michelin-star chef Sang-hoon Deigembre, for example, describes the three most important ingredients of his cooking as “technique, product and emotion”. Exsud, a Polish-based interior designer, used these elements as inspiration for its design. Guests are greeted in a simple reception area clad in wood with a large number of stools reminiscent of pastel-coloured pearls. The walls are washed with a changing hue of light blue, evolving from aquamarine to turquoise. Particularly striking is the path of russet metal leaves, almost forming an arch, which runs across the ceiling and illuminates it with rose opal hangings.

The next step for any restaurant designer is to understand the two most important aspects of the day-to-day running: functionality of the room and what kind of feeling or experience the customers are having. If these aspects are sorted, everything else might just fall into place.

At this point, Rawlings, as the creative director, will come up with what he calls the “big idea”, a vision that he then communicates to the chef or the operator and also his own team of in-house designers. “This big idea doesn’t mean that things should be themed, just that they should have a clarity and a point of view. Inspiration for colour and texture comes from travel and I like to design restaurants that have a sense of place within that city. We would start with colour, it might come from vintage fashion shows or from beautiful ceramics.”

For Todd Saunders of Norwegian-based Saunders architecture, having an original idea for his most famous hotel and restaurant design came rather naturally. Because Fogo Island Inn in Newfoundland, Canada, was the first hotel and restaurant he’s ever done, “the most difficult aspect was me”, admits Saunders. “I was really young and in my thirties when I did the project. But that was actually a blessing in disguise because I took it very seriously and I had nothing to copy so we were coming up with original ideas all the time.”

Fogo Island Inn was to be a cultural and economic engine for the island, one of Canada’s oldest settlements. The inn is owned by a charitable foundation and is now operated for the benefit of the communities, people who by virtue of their centuries of geographic isolation have become masters of making things by hand, recycling and devising local solutions to all manner of challenges. Saunders and his team worked on the designs of the restaurant’s tables and chairs with London-based designers Glass Hill, and Tjep, an industrial designer who designed the lamps. Saunders continues: “The women from the island, the craftspeople, they made the lamps. And the men from the island, the boat builders, they made the tables and chairs. Everything in that room was actually built on the island by the people of Fogo Island. It’s one of the only pieces of handmade modern architecture in the last 100 years ever done.”

After a three-year design process and five years of construction, some important design aspects even turned out to be free of charge. The nature surrounding the building is spectacular. The restaurant, located at the western side of the hotel, has an unobscured view of the sun as it sets directly over the ocean. Equally, guests can watch the whales jumping 45 metres from their tables. Thinking about the food and decoration aspect, Saunders explains that Newfoundland’s food has similarities to Scandinavian food in that it is clean and simple. He has therefore kept the decorations in a very simple palette of materials, with no artworks on the walls. Indeed, the view from the floor-to-ceiling windows could just as well hang on the walls of any Museum of Modern Art—being a picture in itself.

For Rawlings, the ideal timeframe to design a restaurant interior from the first conversation to the first customer is realistically one year. Many projects take longer, some less, but there is a lot to think about.

Ed Poole of Poole Associates, who redesigned Subsix, a nightclub at Niyama in the Maldives, into a restaurant area, says the acoustics were central to his design. “The floor needed to stay timber, as it’s still used as a club on some nights. Thus, we padded the walls and added sound batting material over the ceiling to stop any reverberation. The room needed to have no reflected sound to keep it intimate. The Capiz shells mask the acoustic board.”

In terms of design ideas for Subsix, Poole was aware that the already existing space needed to have a memorable aspect without overpowering the incredible underwater views. Thus he kept the seating black, with a sea urchin concept, and the tables white with dark flooring. Poole has a strong view about his preference for a total renovation of existing spaces: “We rarely ever touch the work of other designers. Once a space is a clean slate, we can see what we have to work with.”

Piet Boon, on the other hand, who has worked with Michelin-star chef Sergio Herman and chef Nick Bril on converting the chapel of a former military hospital in Antwerp into what is now restaurant The Jane, restored only the highly necessary in the chapel and preserved the rest. For him, the original ceiling, for example, conveys the pure, understated and respectful environment that serves as the authentic host for the ultimate fine-dining experience. The original altar gave way to the kitchen that is embraced by glass like a modern shrine. The shared passion of Herman, Bril and Boon to work with pure, rich materials is expressed in the natural stone, leather and oak wood that are used for the interior. But the Piet Boon Studio also collaborated with a number of leading creative partners to shape the “fine dining meets rock ’n’ roll” character of the overall experience. Studio Job, for example, designed the windows consisting of 500 unique panels. Archetypes from various worlds each tell stories of good and evil, rich and poor, life and death as well as good food and religion.

It’s often the details that make a restaurant interior remarkable. In one of Simon Rawlings’ latest projects, The Continental in Hong Kong, green is the main colour, inspired by a tile he found in Milan. He explains: “When you choose a colour you think it looks great in daylight, but then the sun comes in and the colour changes. At night the colour changes again and [green] turns black. It’s trial and error to get the colour that transcends these different times of day.” He also explains his dislike of light fixtures that are switched off during the day. So he designed fixtures that look like sculptures during the day and has an invisible light source making it twinkle at night. Looking closer, Rawlings created certain perforations that follow through in a lot of the details, if very subtly. “I don’t want people to go away and remember this kind of detail, but when you’re in there you really feel that someone has cared about what they’re doing. As much as the chefs take care when they present the plates. It’s the little things.” Revealing one of these little things, Rawlings says: “If you go into one of the restaurants that we designed, always touch the underside of the table. I always line them with felt. It costs maybe 20 pence per table, but it’s those little details that make the difference.”

Rawlings is currently developing a new dining experience in London, together with Nuno Mendes of Chiltern Firehouse fame: the reopening of Viajante at a unique riverside location in Wapping, creating destination dining in central London.