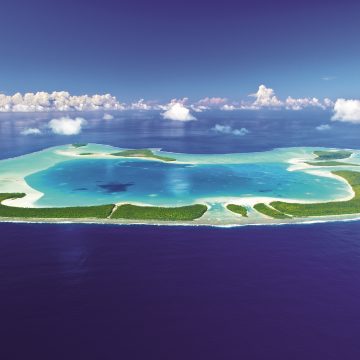 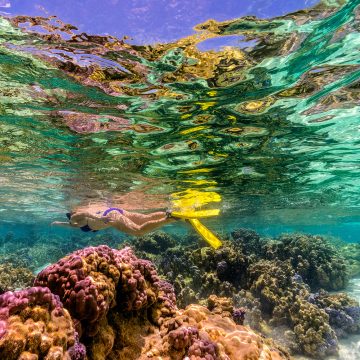 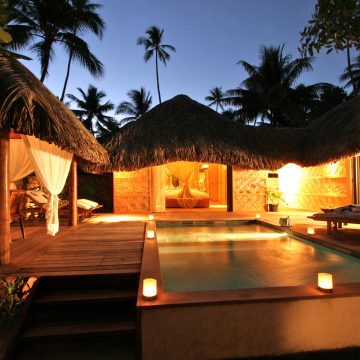 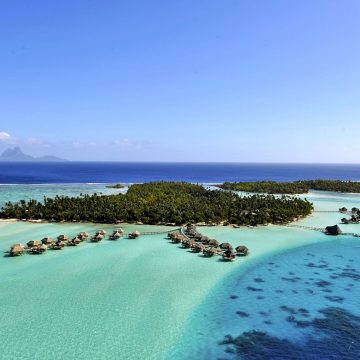 In her search for authentic Tahitian culture and traditions, Rowena Marella-Daw explores the lesser-known islands of French Polynesia.

Barely visible from space, the 118 islands and atolls that make up French Polynesia are clustered into five archipelagos (Society, Tuamotu, Marquesas, Austral and Gambier) in the heart of the South Pacific Ocean. Isolation has kept them barely untouched by modern civilisation, and even today they possess an almost unworldly beauty that beguiles those who set foot on their shores.

Of the five archipelagos, the Society Islands are the most visited, and Tahiti, the largest and most populated, is the main gateway to paradise. And after a long-haul flight, time spent in the capital, Papeete, introduces me into Tahitian culture by way of gastronomy. At Papeete Market I join locals perusing a colourful spread of stalls dedicated to all things Polynesian – seafood, produce, trinkets, costumes, handicrafts and the world-renowned black pearls. At food kiosks it’s not unusual to find French baguettes mingling with local dishes, but upstairs at the Maeva café-restaurant, I savour my first authentic Tahitian food, “Ia Ota”, Poisson Cru to the French. Tahiti’s answer to the ceviche, raw fish, usually red tuna, is marinated in fresh coconut milk and lime juice, then mixed with vegetables – a delicious, refreshing treat particularly when temperatures soar.

My side dish of fried breadfruit or “Uru”, a Polynesian staple, is a tasty cross between a cassava, yam and potato, and is traditionally baked in an underground oven or “hima’a”. A mandate to transport large quantities of this commodity to the West Indies to feed the slaves led to two expeditions commandeered by Captain William Bligh, first aboard HMS Bounty, the events of which inspired the classic film Mutiny on the Bounty, then on the HMS Providence. The humble breadfruit was not an instant hit at the time, but the crop had since become a staple in many Caribbean, Latin American and Asian countries.

Flying from island to island is an exhilarating experience, when landscapes change dramatically during take-offs and landings on narrow runways sandwiched by land and sea. Searching for authentic Tahiti takes me to lesser-known but equally seductive islands, such as Taha’a, which shares a lagoon with its big sister, Raiatea. From Raiatea Airport, a shuttle boat whisks me across the lagoon to Le Taha’a Island Resort & Spa, a Relais & Chateaux property set on a private islet. Arriving at dusk is particularly romantic, when illumination from overwater villas dance over lagoon waters. In true Tahitian tradition I’m greeted with a garland of fragrant flowers (Tiare) and the soothing lilt of ‘Ia Orana’ (“hello”). Polynesian style reigns throughout the resort – from the thatched roofs on sprawling beach villas and canopy fabric on four-poster beds, down to the bamboo sliding panels that open up to the plunge pool and patio.

A quick boat ride from the resort takes me to Taha’a, where time stands still. A journey around the coast involves several stops to literally ‘smell the flowers’ – hibiscus, frangipani and camellia, and drink the juice straight out of a chopped coconut before tucking into the grated meat, each succulent flake moist with coconut milk. Heading towards the interior, peaks covered in dense jungles and hillside plantations create a tableau reminiscent of Jurassic times, I almost expect a pterodactyl to suddenly swoop down. My guide Aru assures me though, there are no dangerous predators on the island.

Taha’a produces a substantial proportion of French Polynesia’s vanilla, earning it the nickname “Vanilla Island”. The Vanilla Tahitensis variety produces larger beans with more seeds, creating a delicate flavour and floral note that sets it apart from the Madagascan and other varieties. Cultivating this crop is a labour-intensive process that takes up to three years, resulting in a depth and complexity valued by top chefs around the world. The island also has its fair share of family-owned farms that cultivate black pearls from black lip oysters. A visit to one of these is an education in the fascinating grafting process that requires a specialised skill and dexterity.

My journey takes me next to mystical Huahine which, according to legend, was cut into half with a spear thrown by the god Hiro during a contest with other gods. Linked by a short bridge, these two islands are endowed with secluded bays and lagoons, waterfalls, mountain ridges blanketed in emerald vegetation. My guide Poe takes me around the island dotted with ruins of sacred marae – ancient temples used by Polynesians to worship ancestral deities for a bountiful harvest and protection. Halfway through the tour, she pauses alongside a stream, picks up a bucket of meat and jumps into the knee-high running waters. In no time, about a dozen fat, metre-long eels slither around her, waiting to be fed. These blue-eyed eels are considered sacred.

The Ma’ohi royal families of Huahine were strongly opposed to French occupation, and the island was the last to succumb to French domination in 1888. Perhaps this sense of pride and respect for the land and heritage continues to protect this “Garden of Eden” from the spoils of 21st century life. In fact, an illustration of Fare Harbour by Swiss artist John Webber on his arrival here with Captain James Cook still looks pretty much the same. But come October time, Huahine comes alive during Hawaiki Nui Va’a, the world’s longest and largest open-ocean canoe race involving over 100 traditional outrigger canoeing teams competing over three days between the islands of Huahine and Bora Bora.

Leaving Huahine’s dramatic landscape behind, I head for dreamy Tetiaroa, an atoll unlike any other in the world for its distinct formation of 12 motus framing a pristine lagoon, and for its conservation credentials. Tetiaroa was once a favourite retreat of Tahitian royalty, and today attracts well-heeled guests who seek privacy and seclusion at its only five-star resort, The Brando. The resort is the legacy of the late Marlon Brando, who became enamoured with the Tahitian islands and his leading lady Tarita while filming Mutiny on the Bounty in 1962. After marrying Tarita, Brando also vowed to own a piece of Tahiti, which led to his purchase of a 99-year lease on Tetiaroa in 1966.

The Brando resort was born out of the actor’s vision to create the world’s first post-carbon luxury resort using innovative technologies, and pursuing this ambitious goal took several decades of negotiations, partnerships and research. The result is indeed a shining example of sheer luxury based on principles of sustainability and biodiversity.

As the resort’s private plane approaches the Tetiaroa’s expansive reefs, its beguiling beauty unfolds, and moments later we land at Onetahi motu, The Brando’s home. To preserve the natural setting, there are no overwater suites here – just ultra-luxurious beachfront villas that blend with the habitat. Every detail is carefully thought out to bring contemporary elegance with hints of native style – thatched roofing, earthy shades and Polynesian works of art. A terraced deck with a plunge pool, lounge chairs and shaded dining cabana make it difficult to leave, but the promise of a culinary journey that brings together French and Polynesian cuisine is even harder to resist.

The ambience at the Beachcomber Café-Restaurant is relaxed yet refined, matched by impeccable service and tantalising dishes: Layered crab cake, guacamole and sun-dried tomato petals with balsamic caramel and local basil sauce; and Scallops trilogy of basil tartar, hazelnut crust, and a la plancha flavoured Espelette pepper. In a more formal setting, Le Mutinés restaurant’s Executive Chef Bertrand Jeanson brings to the table the award-winning cuisine of Guy Martin, Chef Propriétaire of the two Michelin star Le Grand Véfour in Paris. I’m also pleased to see a menu of healthy juices and smoothies at Bob’s bar, and after a few indulgent meals, sipping a detox beetroot cocktail by the beach while watching the fiery red South Pacific sunset becomes a guilt-free indulgence.

Speaking of indulgence, Varua Spa is a paradise with an enormous lake and treatment pods resembling giant nests on stilts. Inside one of these cocoons, a sense of calm and a dose of Polynesian-inspired holistic massage brings relaxation to another level. And of all activities available to guests, a guided tour of the lagoon with a naturalist is key to understanding Tetiaroa’s ecosystems and the resort’s commitment to protecting and promoting the atoll’s biodiversity.

Beyond its majestic vistas and swanky retreats, Tahiti’s allure comes from its customs and traditions, the most tantalising of which is the native dance, ‘Ori Tahiti’. Dance played a major role in Polynesian life, until the arrival in the 19th century of Protestant missionaries who found the ritual indecent, and even persuaded King Pomare II to ban its practice. Fortunately though, the liberal minded French colonisers were no party poopers, enabling the gradual revival of Ori Tahiti and giving today’s younger generation a chance to reconnect with their past through traditional dance, culminating in the exciting Heiva I Tahiti festival held in June and July each year.

Spending my last two days back in Papeete, I seize the moment to witness a 100-strong troupe rehearse for the Heiva festival and watch an exhilarating Marquesan warrior dance performance at the InterContinental Tahiti Resort & Spa in Papeete. I also fulfil a lifetime wish to learn Tahitian dance from top choreographer, Makau Foster. Reluctantly, I leave the beautiful islands and friendly people behind, keeping a piece of Tahitian spirit within, confident their traditions will live on for many generations.