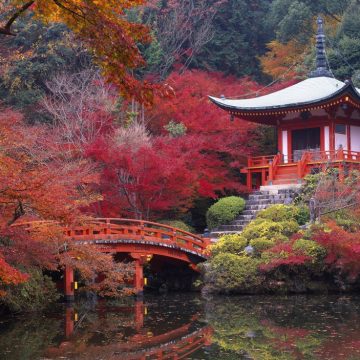 In Japan, New Year’s Eve is widely considered the most exciting festivity of the year. It is the time when families and friends gather for feasts with rigour and pay homage to the stunning shrines and temples, embracing a fresh outlook and optimism for the coming 12 months.

While family celebrations are prevalent during this special period, there is also no better time to experience Japanese culture as a holidaymaker. Kyoto Convention and Visitors Bureauis therefore encouraging all travellers – from the most seasoned visitors to Japan to those looking for a new adventure on the orient – to explore the delights of the city at this magical time of year.

Reflect on the past 12 months and look forward to what the New Year may bring by visiting one of the city’s beautiful shrines between 31 December and 1 January. Worlds away from wasting your evening queueing for club entry, Kyoto locals opt for a more meditative approach to celebrating the coming year, which centres on praying for good health. One of the most notable rituals taking place across these dates is practised at the Okera Matsuri festival, held in Yasaka-jinja Shrine. Here, kagaribi watch fires are ignited by burning the roots of the medicinal herb, Okera, and toro lanterns are lit by the blaze. What is more, a key part of this incredibly atmospheric practice also involves the city’s residents taking back some of the embers of the fire to their homes, tightly wound in bamboo ropes, in the belief that you can spend a year in harmony when those embers are used to prepare a traditional Japanese broth.

For a more colourful environment and myriad opportunities for photography, Heian-jingu shrine and its vast courtyard and sprawling grounds tend to be full of beautifully dressed women and children on New Year’s Eve, while Fushimi-Inari-Taisha shrine offers brilliant scenes of crowds, food antique booths and festivities, all in the backdrop of the incredible labyrinth of gates that make this shrine so iconic. These impressive heritage sites will be brimming with people, but there are few better ways to connect with local Kyoto culture over the course of the New Year.

Ring In The New Year

One ritual many Kyoto locals adhere to is to take part in joya-no-kane, a sacred bell ringing ceremony to mark the end of the past year and start of the new. To eradicate any bad karma from the last year and pray for good fortune in the next, locals line up to ring the bells one by one just before the break of the New Year. This incredible practice can be observed and participated in at various temples across the city, including the iconic Nanzen-ji Temple; Kurodani Temple, which is situated in one of the most peaceful locations atop a hill;, and Chion-in, which is home to the city’s largest temple bell, so heavy in fact that it takes the full body weight of 17 monks to sound the chimes.

During the days of 31 December and 1 January, Kyotoites place the utmost importance on delicious food, celebrating its ability to bring joy to dining tables throughout the city. Feasting typically begins on the evening of 31 December and numerous ryokans and hotels across the city offer divine menus that have been created especially for the occasion:

Lodgings at traditional ryokans in Kyoto get booked up very far in advance of New Year’s Eve, and with good reason too. Hiiragiya Ryokan was established in 1818, and has gained a reputation as one of the most beloved of Japan’s traditional inns. For those lucky enough to have a reservation here on 31 December, a beautiful meal of Kaiseki cuisine, served on Kyoto-crafted ceramics, will be brought to guests’ rooms. The menu at this particular ryokan is always based on seasonal Japanese ingredients, making dinner a truly special occasion.

This exclusive hotel will introduce the traditional dish of Soba noodles to its restaurant menu on 31 December, a meal which is typically eaten on New Year’s Eve to wish for longevity and happiness for the coming year. The hotel is also offering a special package for visitors to Kyoto between 31 December 2017 and 2 January 2018, comprising of a one night stay in one of the beautiful guestrooms, a New Year special breakfast for two in the ‘Kyo-Suiran’ restaurant, the aforementioned Soba noodle supper on New Year’s Eve and one way transportation between the hotel and the Kyoto or Arashiyama train station via rickshaw.

The restaurants at this hotel are known for their spectacular celebratory meals and New Year’s Eve 2017/18 is unlikely to disappoint. While plans for this year’s event haven’t been announced as of yet, offerings at the hotel’s various restaurants are likely to include a traditional Japanese feast and a particularly special Italian set menu. For those who’d like to spend the evening enjoying their hotel room but still indulge in Japanese tradition, an in-room dining menu of Toshikoshi Soba is typically available, giving guests the chance to wish for 12 months of prosperity and eat a delicious noodle dish. Later in the evening, the hotel usually encourages guests to take part in an unforgettable New Year’s Eve Countdown Party with live music, canapés and cocktails.