A little piece of Penang is featured in, what is considered as, the most expensive production Britain’s Channel 4 has ever produced. Shot mainly on this Malaysian island, the television drama series’ producer and direct or chat to Su Aziz about Indian Summers’ locations.

Having been a producer for half a decade, 35-year old Dan McCulloch admits to having no time for hobbies – what with producing a£14 million television series and a family with two children. The Londoner does, however, confess to taking home the experience of making a huge show in ‘a landscape and climate I’d not lived in before.’ And after 25 weeks of shooting in Penang during the second half of 2014. ‘I also loved the time of comparing methods of production with the Malaysian and International crew, who were all brilliant problem solvers and incredibly positive about any task in hand.’

In his own words, Indian Summers is ‘a story of the British Empire in India in 1932. It’s told from the British and the Indian points of view. It’s an original idea created by Paul Rutman.’ The 10-part television drama will be aired in the United Kingdom as well as the United States of America and shot mainly in Penang – namely, Penang Hill which is the highest peak of the island at 823 meters above sea level, George Town which is a UNESCO heritage site since 2008, the scenic Air Itam Dam, 130-year old Penang Botanic Gardens and Penang State Museum.

As to why was Penang chosen as Indian Summer’s location he says, ‘Although the story was set in Simla, India, we were able to double a lot of locations (in Penang) for British and Indian looking buildings and spaces that were right for the period.’

The challenge, he recalls, ‘was bringing a returnable television series to locations that had not been filmed in for many years. We had to travel a lot of people and equipment up and down Penang (Hill) daily and that took a lot of logistical planning to get right. Also, a lot of our international crew were not used to the heat or the mosquitoes. So, we had to always be sure no one was going down with dengue fever!’

For 51-year old Anand Tucker, director of the first four episodes of Indian Summers, he rates Penang as a very photogenic place. ‘Penang offered us an incredible solution to realizing the scope and scale of Indian Summers – wonderful locations, great crew,’ he says. And his favourite spot? ‘Penang Hill. A magical place and it offered us brilliant period architecture and locations, and it was a hell of a lot cooler than at sea level!’ Being his first time shooting in Penang, it sure offers him another experience after his quarter of a century experience in the film industry.

Dan observes that although Penang’s reasonable in some areas but can cost a little more than other locations in some aspects. ‘We were driven more by a creative desire to shoot the series in Penang rather than cost,’ he explains. ‘The people in Penang were delightful, I made some fantastic friends.’

Known globally for its street food such as char koay teow, Penang laksa, nasi kandar and chu char or stir-fry dishes by the likes of Lonely Planet and CNNGo, Penang’s been a destination for foodies from all over the globe. Many have remarked on its authentic flavours and waxed lyrical on the variety of dishes from which to choose, catering to all sorts of palate. So, for Dan having been in Penang for six months and consuming local fare daily, he wholeheartedly concurs. His take on Penang food is ‘simple food done brilliantly well. We don’t have curry like that in the UK. The local fare in Penang’s delicious, spicy, authentic, filling and varied.’ Well, we certainly hope you’ll be back, Dan, perhaps for the filming of Indian Summers’ next season? ‘I hope so! We find out if we get another season after the first comes out.’

At the time of writing this article, the air date and time of Indian Summers on Channel 4 has not been confirmed. For more information on what’s going on in Penang log onto mypenang.gov.my. And for more glimpses of Penang viewthis. 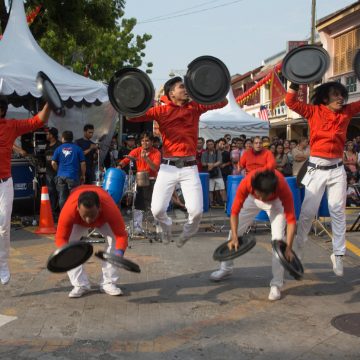 Priding itself to be the place where endless festivities will astound you throughout the year, Penang, as Su Aziz discovers, has a little more than that. It has a little ingredient that makes each festival very simply, unforgettable – food!

How to enjoy Penang to the fullest – from its spicy flavours, complex food ordering system at a hawker centre, culture, habits, weather, right up to its inhabitants’ driving tactics – here’s an insider’s guide by Su Aziz.

Luxury beach resort, The Datai Langkawi, will welcome Michel Roux from 18th to 20th of February 2016 as part of an exclusive cooking series and one-off culinary masterclass…