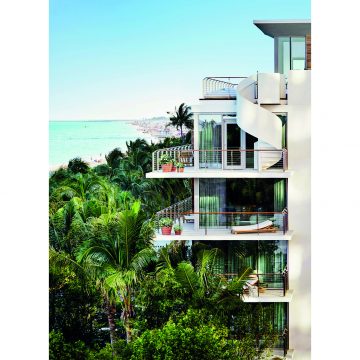 The story from mangrove forest to palm-lined tourism paradise and its culinary diversity make this one of the trendiest spots for sun worshippers, night owls and celebrities, writes Karin Willen.

In step with Miami

Glorious 360° subtropical climate, sunny easy living among fashionable skyscrapers near the blue sea: Henrey Lum could not have imagined such a scenario when his coconut plantation on the mangrove sandbank off Miami failed in 1870. Forty years later, John Collins and Carl Fisher transformed the mosquito-ridden, infertile strip on Florida’s southern tip into a seaside resort. What followed would have blown the minds of these early entrepreneurs.

Ultimately, since 1915, big-thinking bridge builders and imaginative architects have had a field day in Miami Beach. The disaster that could possibly spoil the tourism paradise, party location and luxurious retreat for the rich is a climate change tidal wave. But so far, Miami has still taken its fate into its own hands.

A major art deco district was the answer to a devastating hurricane. A good 960 pastel-coloured buildings from the 30s and 40s, such as a petrified ocean liner or jukeboxes, are lining the streets between Lincoln Road, Sixth Street, Ocean Drive and Alton Road. Most buildings have been lovingly restored and spruced up since 1978, thanks to the Miami Design Preservation League, whose members are touring through the art deco district to this day.

They tell stories of an art deco jewel, whose carefreeness can only make you guess at the crime, corruption and cocaine that was rife. Miami became gangster El Dorado and drug den, then OAP paradise, hippie stronghold, gay Mecca and now general hot spot where everyone from independent artists to mainstream pop stars like Miley Cyrus will impress a crowd of international art connoisseurs and partygoers.

The stories of America’s most famous seaside resort are all true, no need for the imaginary Miami Vice: from “Scarface” Al Capone, who celebrated wild parties on the roof of hotel Winter Haven and whose villa on Palm Island is open for visitors once more; to Josephine Baker, who performed at Fontainebleau, but who couldn’t stay over due to segregation; and Gianni Versace, who was struck down by a serial killer in front of his villa on Ocean Drive when walking back from his beloved News Café in 1997. The list goes on.

It’s Joe’s Stone Crab on Washington Avenue where such stories were likely to have made the rounds. For this seafood restaurant was there from the beginning. Brown’s Hotel, too, has been a contemporary witness. It first received guests at lonely Miami Beach 100 years ago. Today, the modest timber building crouches next to 40-storey luxury towers, while inside it serves decent steaks.

Every December since 2001, art connoisseurs and partygoers have made Art Basel Miami the highest-profit art fair around. With all the hustle there is often no time to visit local artists in the galleries and studios of the fashionable Wynwood district. Too bad, but this is how Matthew Kenney’s fresh, seasonal veggie cuisine at White Lotus, the new temple of trendy health food lovers, remains an insider tip.

But there are more stories. The unique district Little Havana can be accessed from Collins Avenue and the Julia Tuttle causeway, which bears the name of the city’s founder of 1891. On the one hand the swanky hotels, hip lounges, bars and colourful boutiques in front of endlessly long and wide beaches and busy highways, on the other the scents of tobacco and coffee mingling with the rhythm of salsa and merengue in Eighth Street. As Spanish is the main language in Little Havanna, it is better known as Calle Ocho. The district has a population of over one million Latinos, most of whom are Cuban exiles.

At the stalls dark black coffee is sipped from small cups while in the restaurants Hispanic food is on the menu. Arroz con pollo (chicken with yellow rice) or lechon asado (marinated pork) are among the most popular dishes that refute the trend of multiple smaller portions.

Those who have not come into big money meet in Máximo Gómez Park for a game of dominoes. To prove that they haven’t lost touch with the world, painted murals show international personalities. Those who don’t immediately recognise Clinton & Co. will be offered a generous explanation of politics, before the laughter, the cursing and the discussions continue, while silently chewing on cold cigars. This is due to a smoking-ban in Domino Park, unlike a few steps further, in Pedro Bello’s Cigar Factory, where industrious fingers turn out the finest cigars. Bello has put the business into the hands of the fifth generation. Now he stands in front of the door with a big cigar.

But Miami’s Latino trend hasn’t taken over Little Havana yet. “Once upon a time before Ceviche,” could be the title of another story, because the lime-marinated raw fish is very much on trend. Michelle Bernstein celebrates it at Seagrape restaurant at Thompson Miami Beach, as does Jean-Georges Vongerichten in his Matador at Marriott Miami Beach Edition. And the master of ceviche, Peruvian Gastón Acurio, maintains a branch of his La Mar at Mandarin Oriental, one of only a few five-star beach hotels in downtown Miami.

Miami claims to have reinterpreted “Caribbean fusion”. The finest by all means is the Peruvian-Japanese kind, where ceviche is presented as a miso-marinated Hamachi and Sashimi—a fresh sea trilogy. Only in street food does fish not play the primary role. Most gourmet food trucks that have recently appeared at street corners have meat on offer.

Here you will find fashionistas brimming with shopping bags, whose stomachs probably started growling after having strolled round the branded stores and glossy boutiques in the pedestrian area of Lincoln Road or the exciting furniture design stores in the Design District. Miami Beach is also a paradise for vintage fashion connoisseurs. In C. Madeleine’s on Biscayne Boulevard you can find second-hand pieces from the best designers of the last 70 years. Only large outlets are missing at the epicentre of luxury and fashion. These lure guests with bargains especially in October. But Florida connoisseurs prefer spring when the humidity is lower. Among the 360 ​​shops in Sawgrass Mills, 36 miles away, are exclusive outlets by Ferragamo or David Yurman. The Premium Outlet Center in Florida City, 43 miles towards Key Largo, offers a good overview of American fashion designers, from Altuzarra to Oscar de la Renta or Zac Posen. Very close to the Miami International Airport, which serves non-stop flights from […], you can a bargain at Dolphin Mall, from Banana Republic to Neiman Marcus Last Call. Though you will more likely find insiders from Miami at the classy shopping mall Bal Harbour Shops, telling yet another story… of bargains.