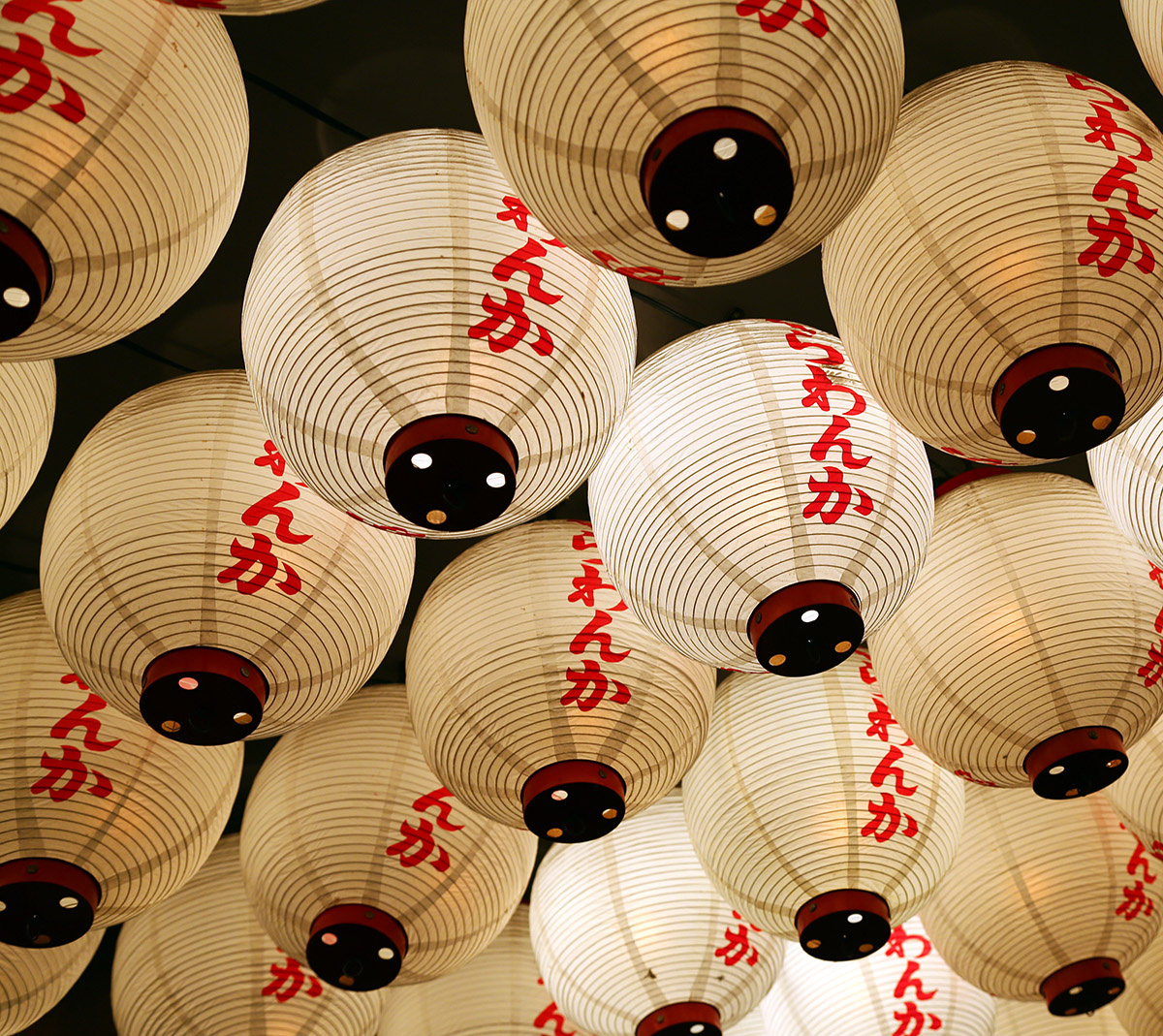 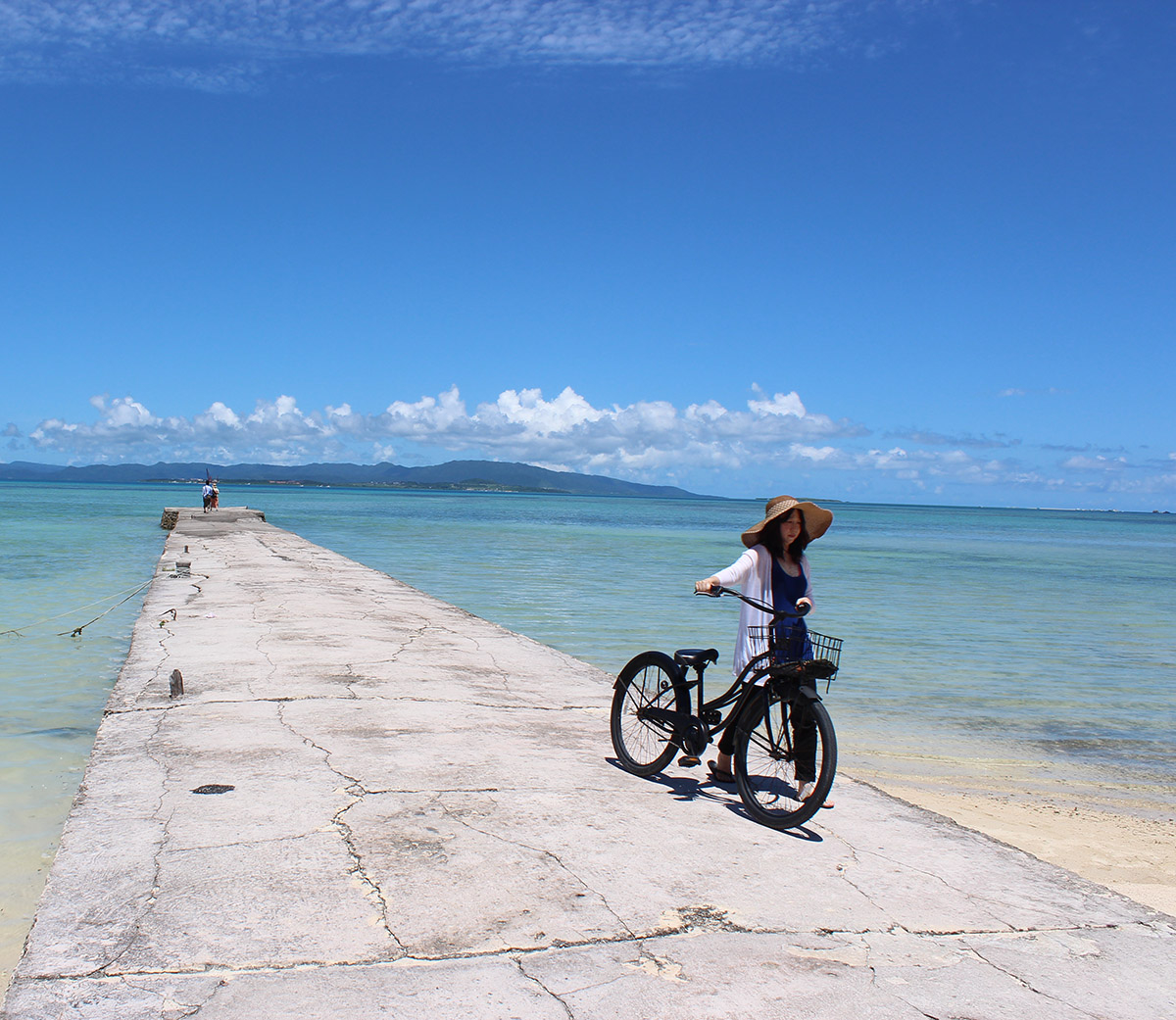 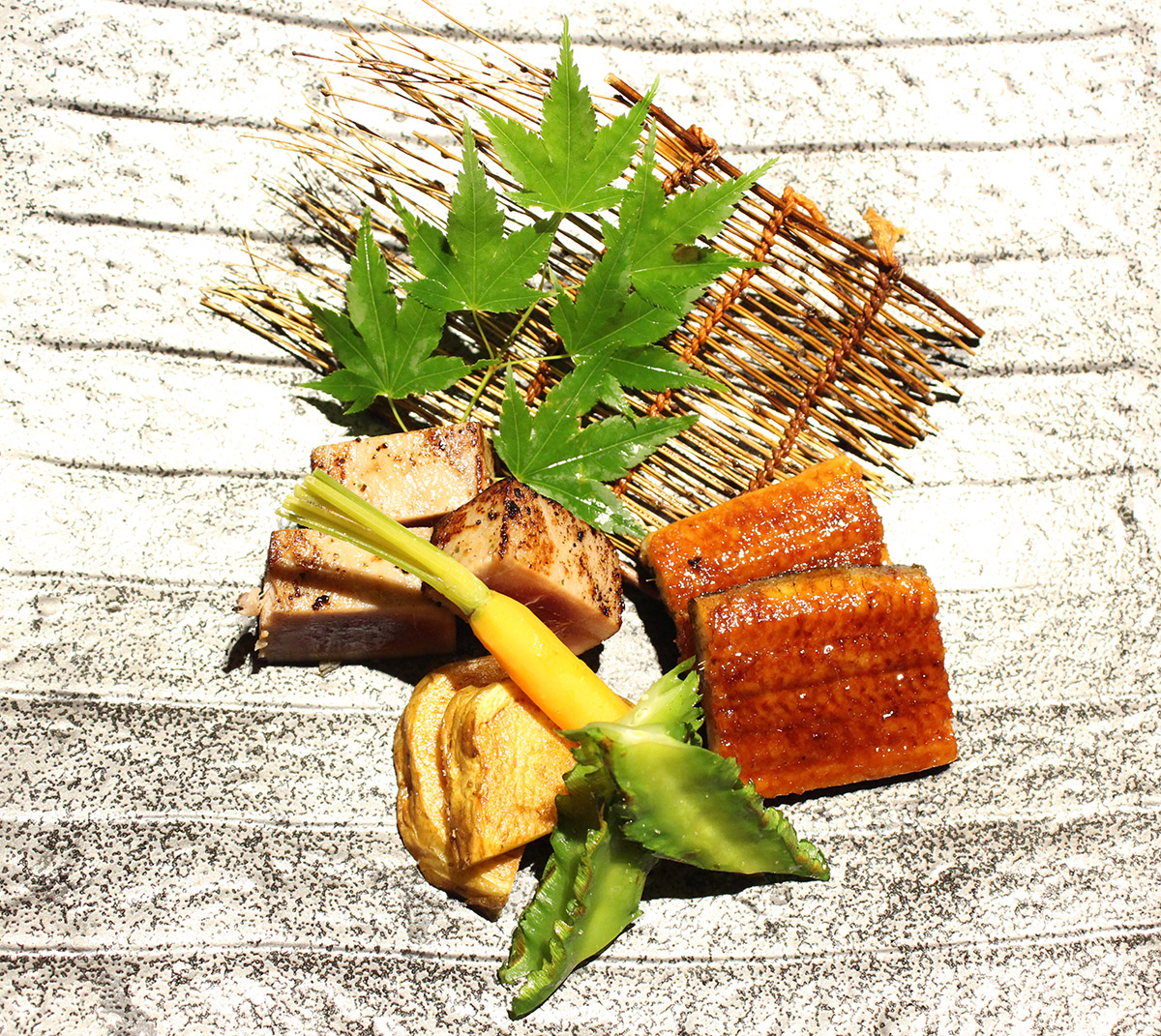 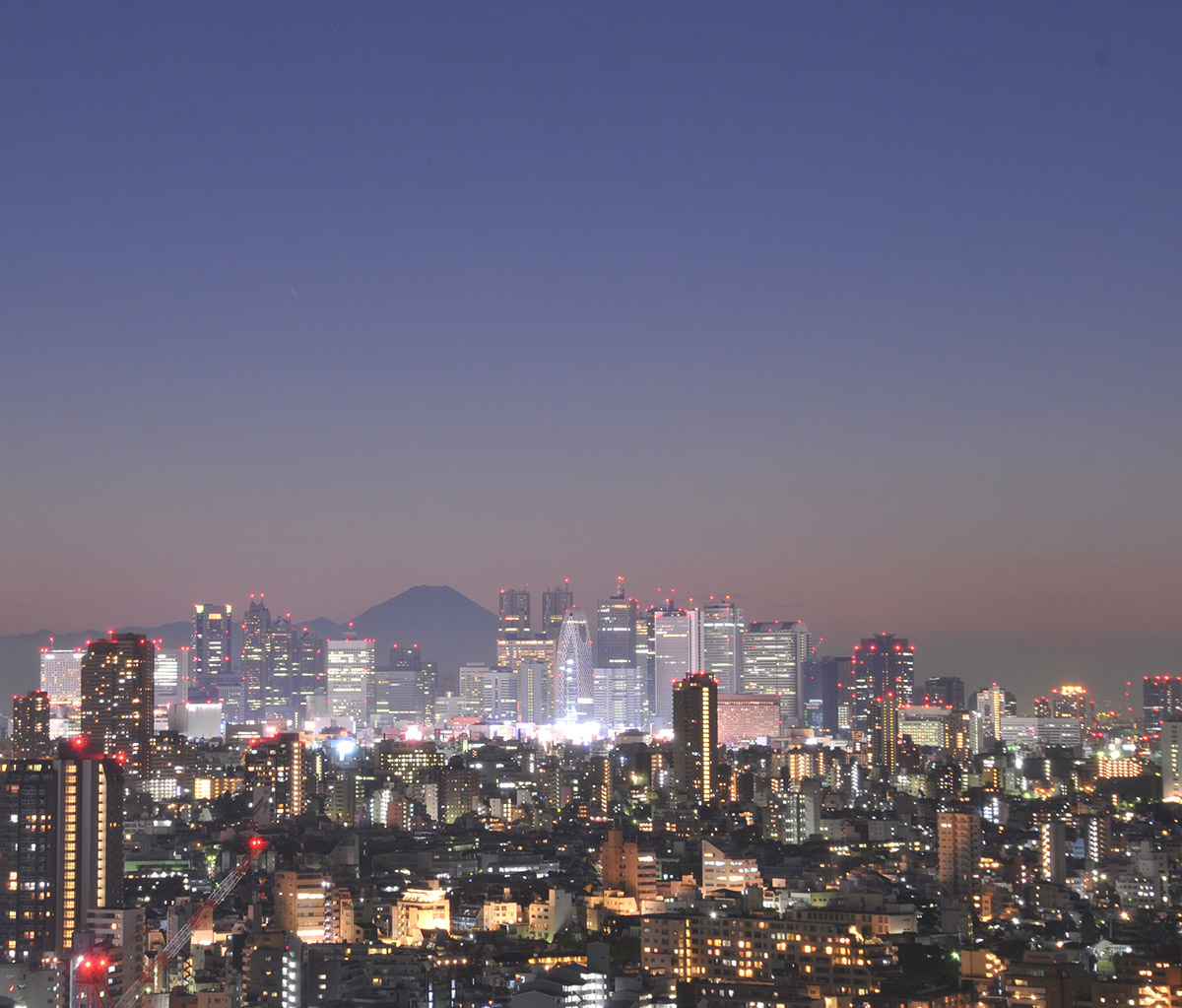 Land of the Rising Sun

Japan might be epitomised by the buzz of its capital, but there are two sides to this vast and diverse country. From fast-paced to a subtropical stupor, Graeme Green explores Tokyo before slowing the pace in Okinawa.

Chef Mazakusu Ishibashi raises a cleaver. “Clam?” he asks, dropping one onto a wooden board. The clam’s sides curl up, still alive. Before I have time to answer, Ishibashi chops it cleanly in two and, using chopsticks, places the pieces carefully on my plate. It’s hard to get fresher than that.

This tiny Tokyo sushi restaurant, Sushi Ichi, is hard to find, tucked away on an inauspicious side street in the busy Ginza shopping district. Inside, it looks exactly as you imagine a Japanese sushi restaurant, with Ishibashi and his assistant, both with shaved heads and wearing black kimonos, deftly using long sharp knives to slice and serve the highest quality fish from the famous local Tsukiji fish markets. “Sushi is Tokyo soul food,” Ishibashi tells me, as he serves his signature fatty tuna, then sea urchin, sea perch and flounder sushi fresh-rolled with healthy doses of wasabi, accompanied by a small jug of crisp saké. Afterwards, as I leave, Ishibashi and the waitress follows me out onto the street, bowing respectfully, a very Japanese gesture and a sign that—as is clear from the food—they care about what they do.

The whole thing feels like a classic Japanese experience. But defining ‘classic Japan’ is difficult when the capital and the country have so many different sides and suprises. I spend a week in Tokyo, often in the shadow of shining skyscrapers, exploring traditional Japanese gardens and the peaceful grounds of the Imperial Palace, then the bright neon of the ‘Electric City’ (Akihabara). I watch traditional weddings at the Meiji Shrine in sedate Yoyogi Park, then zoom in a lift 450 metres up to the top of the new Skytree, one of the world’s tallest structures. One morning, I take my seat with the locals for some traditional Kabuki theatre, a colourful, distinctive, often bizarre stage show with big dramatic gestures and eerie music, then, in the afternoon, I’m entertained by Asimo, a four foot tall talking robot who runs, dances and kicks a football across the halls of the Miraikan Museum. All this, you could easily say, is ‘classic’ Japan.

I manage (by booking a month ahead) to get a table at cutting edge Narisawa, chef YoshihiroNarisawa’sacclaimed restaurant. The meal is full of Blumenthal-esque moments, including a salad that looks like a square of ground lifted from the forest floor with edible grass and soil, sweetened bark, leaves and a thimble-sized hollow tree trunk filled with cedar and oak-infused water. Happy diners snap the novel plates of food on their smart phones: oyster with cherry blossom vapour, or herby bread baked fresh in a stone pot on your table. It’s impossible to guess what each course will taste like but it’s always a pleasant surprise.

The city’s hotels throw up the same kind of diversity: traditional or modern, grand giants or small and personal. I spend time in the thriving business and entertainment district Maranouchi, first at the Palace Hotel Tokyo, Tokyo’s newest five star opening, next to the Imperial Palace, then the more intimate, boutique-like Four Seasons Tokyo, close to Tokyo Station. I also check out the Ritz-Carlton Tokyo at the top of the 53-storey Midtown Tower in Roppongi, Tokyo’s tallest building. The sushi in the hotel’s Michelin-starred Japanese restaurant, Hinokizaka, served by chatty waitresses in kimonos, makes me want to move to Tokyo.

As well as these modern venues, I stay at the more traditional Chinzanso Hotel in Edogawa Park, a world away from the skyscrapers and city bustle. In a garden room with tatami flooring and paper walls, two women in kimonos lead me through a traditional Japanese tea ceremony, each element careful and graceful in the delivery. “Tea ceremonies were held between top levels of Samurai,” my host Harue Kamiya explains, after we’ve drunk the bitter green tea.

I fly from Tokyo down to Okinawa in southern Japan. The landscape couldn’t be more different as I drive along the coast, with green, Pacific island hills and each corner bringing a new stretch of white sand. After Tokyo’s bright lights and fast pace, here on the island everything slows. The subtropical islands of the region used to be an independent Ryukyu kingdom and has a proudly different culture from the mainland. “The lifestyle’s more relaxed,” says Shoji Ueda, an Okinawan guide. “It’s okay for things to be behind schedule. It’s known as ‘Okinawa time.’ And there’s less stress.”

Okinawa’s still perhaps best known as the site of World War II’s 81-day Battle for Okinawa. I visit the Peace Memorial on the south coast, which remembers the Japanese, American and British lives that were lost. The USA occupied the islands after the war until 1972 and many USA bases remain today. There are signs everywhere of American culture, from fast food restaurants to Hawaiian shirts. The islands are also where the martial art karate originated.

More recently, it’s the Okinawa region’s healthy food that has been putting the islands on the map. At the Ritz-Carlton Okinawa, up on the north coast, overlooking Nago Bay, I sit at the counter and watch teppanyaki chef Yuji Takakura flipping and sizzling food on the grill, including snapper, seaweed and local vegetables, such as sweet potato and goya (bitter green veg). “Food in Okinawa is very healthy,” Yuji tells me. “We eat more pork in Okinawa than beef on the mainland. Okinawa pork is low cholesterol. We eat a lot of vegetables. Okinawa people live to be older, maybe to 90 or 100, maybe because of the pork and vegetables.” Scientists around the world continue to study the Okinawan diet, which features a lot of fish, tofu and local fruit and veg, for clues on how to achieve long lives, like the islanders. One Okinawan woman died just a few days shy of reaching 115 years old. The islands also have low rates of heart disease, stroke, diabetes and cancer.

I check out the whale sharks, manta rays, dolphins and tropical fish at the Okinawan Churaumi Aquarium and visit Shuri Castle, the government HQ during the Ryukyu era, as I drive back down through the island to Hyakuna Garan, an elegant white limestone hotel that opened just last year. At high tide, waves cover the rocks and reach the hotel walls—my balcony couldn’t be more ‘seafront’ without actually being in the sea.

In the evening, waitress Seiko gives a detailed introduction to each of the dinner’s nine courses, which is useful as there are ingredients I’ve not come across before, including local seaweeds and seagrapes. Each small dish or element is presented artfully and with care, very Japanese, and there are frequent suprises, like Ryukyun tofu aged with a big kick punch of local awamori (rice whisky), and a shrimp and seaweed cake in rich peanutty tofu potage.

Each of the Yaeyama islands has its own feel and unique possibilities. I fly across to Ishigaki and spend a morning diving in the gentle, almost current-free waters out from Kabira Bay, swimming among clownfish and other brightly coloured fish. On Iriomote, I hike through rainforest-covered hills to the top of Pinaisara waterfall, the region’s highest, then catch a ferry across to the tiny, laidback island of Taketomi, staying at the recently opened Hoshinoya Okinawa resort. The villas are based on local, wooden houses with traditional tatami mats, sliding doors and futons, but also have plenty of modern comforts: WiFi, an iPod dock and a standalone bathtub.

I spend an incredibly relaxing afternoon cycling around the small island, passing green fields where cows graze, stopping to snorkel off white sandy beaches. Dinner at the hotel has French-style cooking, the first time I’ve used a knife and fork, rather than chopsticks, since I arrived in Japan. But the ingredients are predominantly local, with juicy Taketomi prawns and a delicious tomato gazpacho soup with basil fresh from the hotel’s garden.

After a similarly impressive breakfast of tofu pancakes, poached eggs, mackerel and local vegetables, I take a gentle ride around the village on a cart pulled along by water buffalo power. The village is peaceful, with narrow streets lined with limestone walls that have been decorated with colourful flowers. As we trundle along, the driver picks up a local three-stringed instrument, like a banjo, and sings an island folk song. I get dropped off near a café and try the local take on ice cream: a heaped pile of ice shavings sprinkled with local brown sugar. At the bottom of the bowl, there’s a layer of kidney beans, Japan serving up surprises right to the very end. It isn’t quite the best thing I’ve tasted in the country, but then, it had some very stiff competition.

“Scientists around the world continue to study the Okinawan diet, which features a lot of fish, tofu and local fruit and veg, for clues on how to achieve long lives, like the islanders. One Okinawan woman died just a few days shy of reaching 115 years old.”