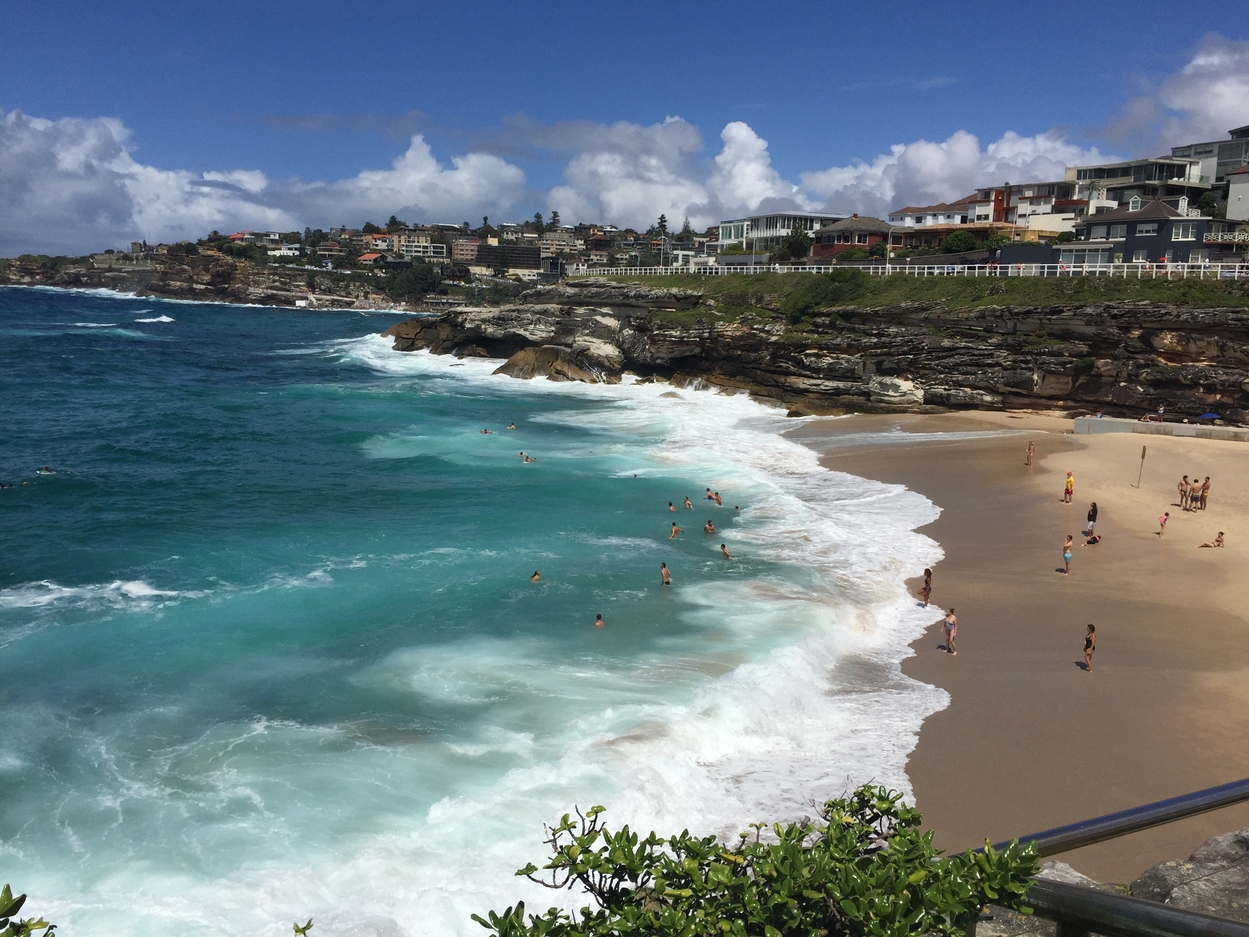 If Sydney were a person it would definitely be David Gandy. Impeccably turned out, unashamedly handsome and with a year round sun-kissed glow, Sydney is undeniably beautiful.

As my taxi drew into Circular Quay, without warning I caught a first glimpse of the city – and Australia’s – two most famous landmarks. Few manmade sights are as breathtakingly beautiful, but seeing the Harbour Bridge and Opera House (particularly the Opera House) for the first time in all their lustrous glory, certainly has that pull.

There are a cluster of top end hotels right in the heart of the quay, including the Park Hyatt, Four Seasons and Shangri-La. Having just had their suites renovated, the Shangri-La hotel is the most convenient spot for sightseeing combined with luxury and with the benefit of panoramic views of the harbour, from 31 to 34 floors up.

Here’s a piece of useless trivia for you: did you know that the tiles of the Opera House’s external shell are self-cleaning and are the same Swedish-made tiles used by NASA space crafts during the Space Race? Taking visitors into the bowels of this Jørn Utzon-designed performing arts centre, this is one of the many fascinating nuggets of information guests are offered during the one-hour Sydney Opera House tour, which is well worth booking yourself on. Wander the operatic theatres and passageways once walked by Pavarotti, learn about the architecture, past performances and unique stories, which arguably make this the most famous performing arts building in the world.

After your fill of Opera House touring, head next door to Sydney’s Royal Botanic Gardens and get lost in the towering vegetation and lush landscaping. Sweeping around the harbour from Farm Cove to Woolloomooloo Bay, the Royal Botanic Gardens opened in 1816, and covers roughly 30 hectares of ground. Take a pit stop for an iced tea or coffee at the gardens’ restaurant (the feel is more café than restaurant) before visiting the Museum of Sydney and Museum of Contemporary Art, both in Circular Quay/ The Rocks area. Two of Sydney’s most popular museums, with each offering a different perspective on art and artefacts, the Museum of Sydney, in particular, showcases a diverse landscape of national and international exhibitions and works, such as the recent Harry Seidler exhibition of the world famous Austrian architect who had significant roots in Australia. Equally fascinating, the Museum of Contemporary Art is just a short walkway, located directly on Circular Quay, opposite the ferry terminus and is housed in one of the city’s most architecturally stunning public buildings.

Once you’ve had your fill of art and culture head to Peter Gilmore’s Quay restaurant for lunch overlooking the harbour. Quay is ideal for watching the hive of harbour activity, while gorging on either an eight-course tasting or a la carte menu. Specialising in Australian fine dining cuisine, Gilmore’s dishes are extraordinary, with his skill for creating layer-upon-layer of texture and flavour unmatched. Dishes such as raw smoked wagyu, horseradish soured cream, fermented rye crisps and raw fungi showcase his kitchen flair to the max. While each course gratifies and excites the senses, dessert dishes are extra special. From the Snow Egg to the rose, lychee and coconut dish, Peter Gilmore’s wickedly good afters deserve their own dessert bar (preferably in London!).

Once you’ve indulged at Quay, walk off your lunch with a stroll over the Sydney Bridge to soak up the harbour view once again.

In the evening, gravitate towards one of Sydney’s cool neighbourhoods – Surry Hills is highly recommended – for drinks and a bite in a local setting. Interspersed with an array of colourful Victorian houses, vintage stores, independent boutiques and a good selection of bars, restaurants and pubs for cooling down come sunset, Surry Hills is Sydney’s answer to New York’s Williamsburg or London’s Shoreditch neighbourhoods.

Try The Clock and The White Horse on Crown Street and Dove & Olive on Devonshire Street for casual cocktails, local beers and food in a hip setting. Surry Hills is also dotted with an excellent choice of informal restaurants serving everything from gourmet pizzas and burgers to Greek, seafood and Asian cuisines.

The beauty of Sydney’s foodie landscape is that every strand of the culinary spectrum is represented in the city, from cheap but insanely delicious cuisine from around the world to Mark Best’s restaurant Marque in Surry Hills and Quay restaurant in The Rocks at the top end. Matt Moran and Peter Sullivan’s Chiswick in Woollahra has been a favourite among Sydney’s foodie crowd since opening two years ago, while Guillaume Brahimi’s Guillaume restaurant in Paddington and Brent Savage & Nick Hildebrandt’s Monopole and Yellow restaurants (of Bentley Restaurant & Bar fame) in Potts Point are also hugely popular for fresh, local and seasonal cuisine.

Close to Darling Harbour, a visit to Sydney Fish Market one morning is a must to witness much of the city’s fresh sea produce trading hands. Take in the atmosphere as fresh seafood, shellfish and crustacean are exchanged and consumed. Expect bright-red-shelled rocklobster and an array of other native delights, including blue swimmer crab, Moreton bay bugs, barramundi and more. Pick up a snack of fresh sashimi or grilled seafood, such as salt and pepper squid, scallops mornay or grilled lobster tails before heading to a market of another kind in Paddington.

Paddington Markets, which takes place every Saturday, is filled with independent designers, arts, crafts and vintage fashion. After the market, weave your way along Oxford Street towards Surry Hills, where you can find a large selection of boutiques featuring designer fashion, unique homeware and artisan Australian products.

For a slice of Sydney’s beach culture, a visit to Bondi Beach is not to be missed. Plan a Sunday visit and take in the weekly Bondi Sunday market, featuring a mix of arts and crafts, such as locally designed throws, cushions, handmade soy wax candles and other artsy souvenirs. Next stop is Icebergs for morning coffee and cake. To the south of Bondi Beach, Icebergs is frequented by the beautiful people of Sydney, featuring an outdoor café, indoor restaurant and bar and the famous Bondi Icebergs Club (pictured). The place to see and be seen in Bondi, enjoy the view from the terrace before spending some time on the beach.

Manly Beach is commonly recommended over Bondi, however I disagree. Bondi Beach is longer, the sand is softer, the waves are more aggressive (be careful of the rips!) and it is a far better location for people watching however, be your own judge and take the $15 return ferry from Circular Quay to Manly, too. If not for the beach, the ferry ride alone is worth the trip.

Back to Bondi and once you’ve soaked up the sun on the beach, take the coastal walk to Coogee Beach, passing Tamarama, Bronte, Gordon’s Bay and Clovelly beach, before reaching Coogee and cooling off with a dip in the tepid turquoise water. Swim, surf, snorkel or just relax on one or more of the beaches, taking in the breathtaking cliff top views as you go and, when you reach Coogee, stop off for a cool down at the beachside Coogee Pavilion. Like all of Sydney’s see-and-be-seen destinations, Coogee Pavilion is excessively glam and the locals really make an effort. Serving fresh seafood and shellfish and a large menu of options, plus many local taps, wine and showy cocktails, it’s definitely worth of a visit.

After a long walk followed by refreshments, head back to the Shangri-La for some relaxation at the hotel’s spa. One of the best in the city, Chi, The Spa, is Shangri-La’s Asian-influenced retreat, featuring personal steam showers, face and body treatments, a gym and swimming pool. Once you’re relaxed-out, retreat to your suite – take in that view once again – and ready yourself for a night on the tiles, kind of. Sticking within the luxury and comfort of the hotel, dress up for Blu Bar on 36, Shangri-La’s 36th-floor bar. Sip on a cocktail and savour the moment the sun goes down over Sydney. After cocktails, head to dinner one floor below at Altitude restaurant, overseen by chef de cuisine Nathan Griffin.

Getting back to your suite for the night is easy after a nightcap at Blu Bar on 36. Indulge further in the Shangri-La’s incredible newly renovated suites, featuring views of the harbour, large and luxurious beds, marble bathrooms and separate rainforest showers and bathtubs, plus exclusive access of the club lounge on level 30.

Sydney is a beauty. There’s no denying it. But it’s also a city of colourful characters, incredible food and great shopping. And if you can tear yourself away from the good looks of the harbour and the beaches, take the time to get to know the city’s neighbourhoods, too – you won’t regret it.