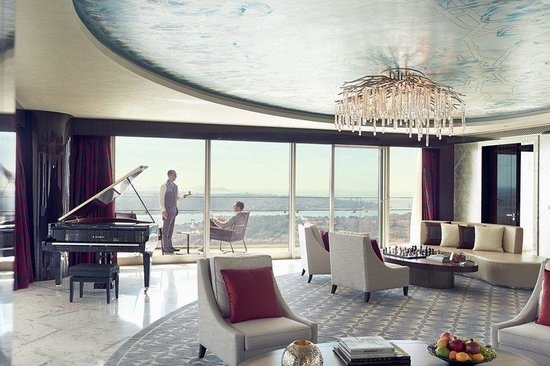 There’s little surprise that one of the world’s finest presidential suites happens to be in Russia – the land of grandiose extravagance. Last year, the Belmond Grand Hotel Europe’s, in St Petersburg, unveiled six new suites and the largest presidential suite in the city. The new suites, inspired by 20th century Russian artists, have been formed from 19 rooms during a restoration of the property.

Complementing this historic hotel’s neo-baroque décor (the hotel celebrates its 140th anniversary this year), the new suites were created by Tihany Design, a high-end hospitality specialist whose other projects have included the Belmond Hotel Cipriani in Venice.

What makes this presidential suite so special? Spread out over 350 sqm, the lavish suite is accessed through a grand lobby with dramatic domed gold-leaf ceiling, providing views of Nevsky Prospect (the main street in St Petersburg). The suite features two bedrooms, each with king-size beds, two marble bathrooms and a luxurious and private Turkish bath. It has its own exclusive fitness centre, with a treadmill and cycling machine, a games room and a combined study and library with a secret bookcase door leading to the bedroom.

If your appetite for being waited on hand and foot is yet to be satisfied, a round-the-clock butler should do the trick. With private chefs on hand and a fully-stocked kitchen, a dining room seating 10 people, a spacious living room with its own bar and a music room, complete with an antique Carl Schroeder grand piano, the Grand Hotel Europe’s Presidential Suite ensures that once inside, guests never want to leave.

Avant-Garde Suites start from £3,388 per night. Rates for the Presidential Suite are available on request.

In a city famous for its palatial hotels, when The Peninsula Paris opened in 2014, it brought with it great expectations of unparalleled opulence. The first Peninsula to open in Europe, the Paris property has indeed set new standards in luxury. On Avenue Kléber, just by the Arc de Triomphe, The Peninsula Paris is located within a late 19th century Haussmann building, which first opened as one of Paris’s grand hotels in 1908 (A spot of trivia for you: in 1928 George Gershwin wrote An American in Paris while staying at the hotel!)

Over a century later and the building has been completely restored to its original beauty, while the latest technologies and luxury amenities have been added to enhance the guest experience. One of the restoration’s biggest triumphs was the installation of 34 suites – among them the magnificent 318 sqm Peninsula Suite – the largest one-bedroom suite in Paris. Of course, a suite of presidential stature requires more than just space. The Peninsula Suite offers an array of high-tech gadgets allowing guests to tailor room settings to their individual tastes, such as mood lighting, an LED touch screen for operating the lights, television and radio, curtains, valet call, ‘do not disturb’, temperature control and weather preview, plus touch-screen restaurant menus, hotel information, a city guide and personalised TV access with noise-cancelling earphones.

With a separate bathroom and dressing room, work, dining and relaxing areas, including a dedicated office space and impeccably turned out living room, the suite is well thought out.

Packed with cultural charm, a buzzing food scene and plenty of architectural gems, Istanbul is one of the world’s most exciting cities. Last year saw the Raffles hotel group muscled in on the action, bringing their large and luxurious style to the city with the opening of their first Turkish property.

Among the hotel’s five suite types is the prized two-bedroom Raffles Suite. Sprawled over 416 sqm, with floor to ceiling glass windows and stunning views of the Bosphorus from each room, the suite includes spaces for living, dining, dressing, exercising, working and entertaining, with features such as a kitchenette, an 86 sqm private terrace and walk in wardrobes.

Arriving in style is important, too. Guests staying at the Raffles Suite are collected at the airport by private helicopter transfer and offered champagne upon arrival. During their stay, guests are treated to either a 30-minute helicopter ride or private yacht tour, a Raffles butler service and a couples massage in a private treatment room, plus personalised extras such as a bathrobe, iPad cover, luggage tag, cardholder and in-room stationery. Rates available upon request.