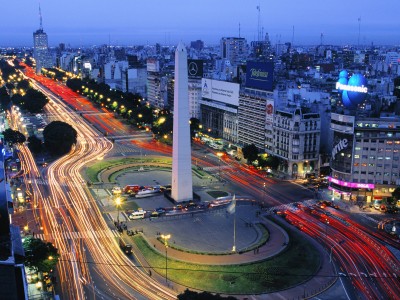 Sorrel Moseley-Williams wanders the cobbled streets and samples the delectable treats on offer in the buzzing city of Buenos Aires.

While Buenos Aires has its fair share of architectural gems –the Casa Rosada where Eva Perón received her adoring public from the balcony or Palacio Barolo, one of Latin America’s first skyscrapers designed with Dante’s Inferno in mind– the Argentine capital is ideal for leisurely wandering.

With hip cafés dotting cobbled street corners and delectable restaurants rubbing shoulders with hidden boutiques, it’s easy to while away a morning in Palermo Soho’s stores before heading to boho San Telmo to browse antiques dens Aladdin would feel at home in.

For light bites and caffeine injections, stop by Ninina or La Alacena. Offset a beefy burger and all the trimmings with a kale juice at Ninina; weekend affairs at La Alacena, meanwhile, are deliciously casual but brunchers should put in a request with Edesia to ensure the sea-salted chocolate tart is on the menu.

For serious eats, Tegui is home to Argentina’s most wanted tables, dishing up a dreamy five-course tasting menu that evolves at the whim of chef-owner Germán Martitegui. Sit out on the smart patio or inside for a closer look at culinary proceedings in the open kitchen.

Aramburu also deals in tasting menus but of the 12-course variety, serving them up in an intimate space for 16. Chef Gonzalo Aramburu works closely with top local sommelier Agustina de Alba to create a sublime wine list that pairs perfectly with each dish.

At Tarquino, located at Hub Porteño hotel, elBulli-trained chef Dante Liporace shot to fame with his innovative cow sequence, a top-to-tail beef menu. One of the young guns on Argentina’s nueva cocina stage, his creativity in the kitchen knows no bounds; one must-try is his foamed margherita pizza.

Had your fill of pampas-fed Aberdeen Angus and scribbled your name on a demolished Malbec bottle at classic steakhouse Don Julio? Fer Rivarola from El Baqueano sources more unusual cuts such as yacare (alligator) before giving them the haut cuisine treatment. He also hosts irregular pop-ups under the Cocina Sin Fronteras (Cuisine Without Borders) moniker, cooking with regional chefs such as Peru’s Virgilio Martínez and Brazil’s Alex Atala.

Hidden-away watering holes are all the rage in BA, and The Harrison Speakeasy leads the pack. Using Nicky’s Sushi restaurant as a shopfront, after dinner, ask “to see the wine cellar.” A cunningly disguised door opens up to the stunning bar, led by Argentina’s top mixologist Seba García, that’s the prohibition era personified.

Meanwhile, Florería Atlántico is set up as the perfect apology store, stocking beautiful blooms and superb vintages. Take the plunge through the fridge door and head down to the basement to the award-winning bar for a refreshing Chinchibirra made from Argentina’s native white Torrontés grape, limoncello and ginger ale.

By day Victoria Brown operates as a cutesy café but come dusk, her majesty transforms into an industrial age speakeasy where attention to design detail is foremost. Sporting one of the most eclectic drinks lists in town, sample the unforgettable Desde Cuba, a smoking rum number served out of a brown paper bag.

If you can work out the cryptic password of the week via its social networks, speakeasy Frank’s is another sure-fire hit for sipping secretive tipples with a fun crowd.

With just 11 smart suites that fuse antiques with contemporary design to scream sophistication, Hub Porteño’s emphasis is on tailor-made care for its guests. From tango classes to music experiences, the Recoleta-based hotel wants you to live like a local during your stay.

Meanwhile, wine is at the heart of nearby Algodon Mansion, whose sister hotel is based in San Rafael, prime Mendoza wine country, and creates its own vintages. A glamorous 1912 classic French townhouse that underwent a facelift, book the Royale Suite complete with cellar.

For boutique apartment-style living, Casa Umare combines French and Spanish architecture with I Ching philosophy across its six “houses”; guests only cross paths at the swimming-pool or on the terrace. Umare is also home to Franco-Argentine restaurant Bistronomie.

Named after Fuegia Basket, the Tierra del Fuego native indian taken by Charles Darwin to the UK, hand-crafted perfumes and candles taking inspiration from Argentina’s most southern province are the order of the day at Fuegia 1833. Choose from the 56-strong menu or create your own from the laboratory’s 1,500 aromas; named after Darwin’s ship, hints of oak, rum and gunpowder make up Beagle.

With a refreshing outlook on the Argentine style staple, Humawaca brings leather into 2015. Bright colours and innovation turn everyday accessories on their head; give Oruga, a voluminous spherical handbag with bandoneón undertones, a whirl.

After designing with Martín Churba and Tramando for many years, Jessica Trosman has gone solo to create edgy women’s wear line JT by Jessica Trosman. Her fresh Villa Crespo store is the current Mecca for hot young things looking for key pieces.

For trinkets old yet new, silversmith Marcelo Toledo makes bespoke jewellery, candelabras and cutlery, catering to all kinds of royalty including Spain’s crown and the queen of pop herself Madonna.

While it’s easy to fall in lust with Palermos Soho and Hollywood, which are a-quiver with activity, also saunter around upmarket Recoleta (Eva Peron’s final resting place, looks like Paris, isn’t Paris) and artsy San Telmo. Villa Crespo is also on the up, with cool cafés and veggie restaurants fighting for space with outlet stores.