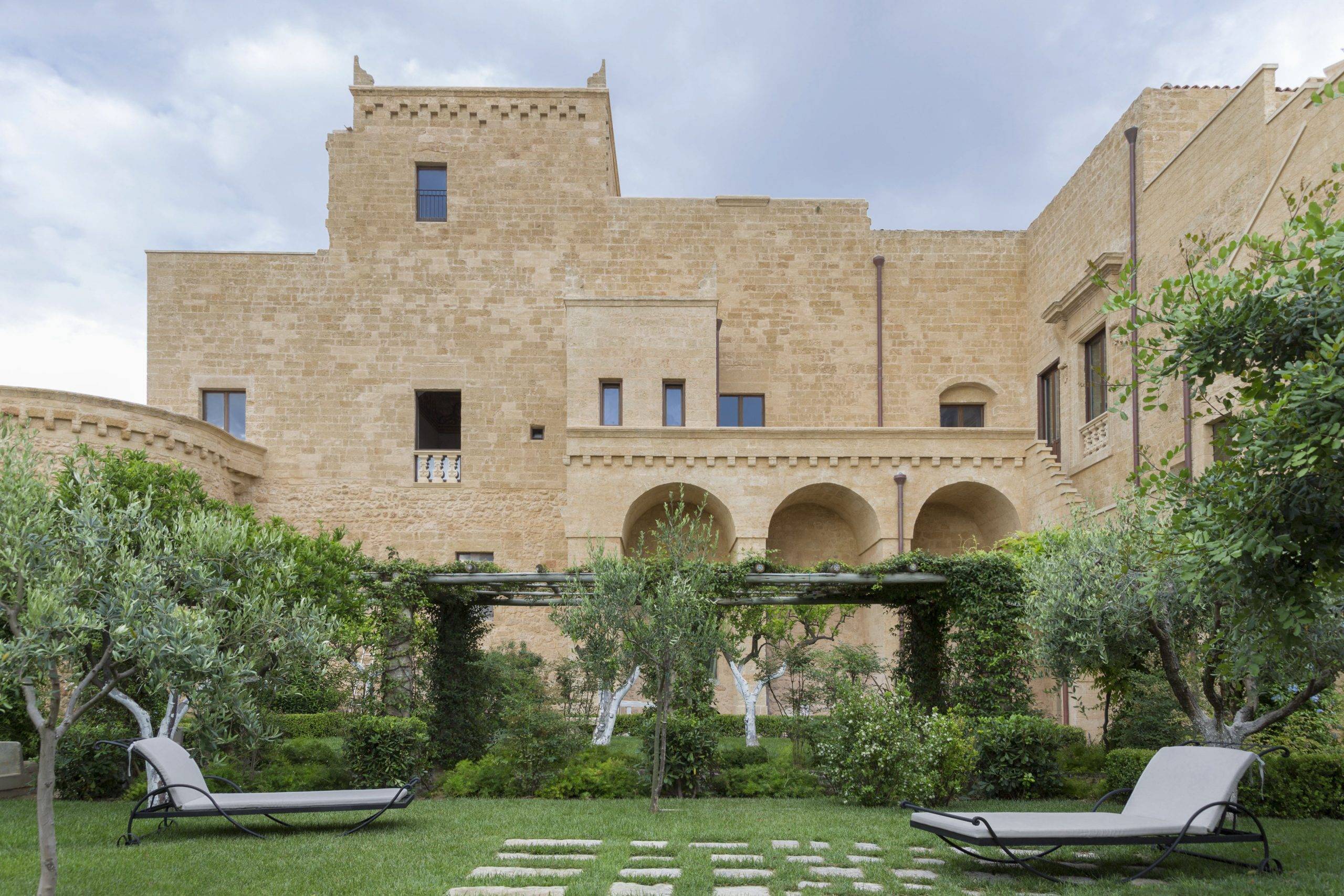 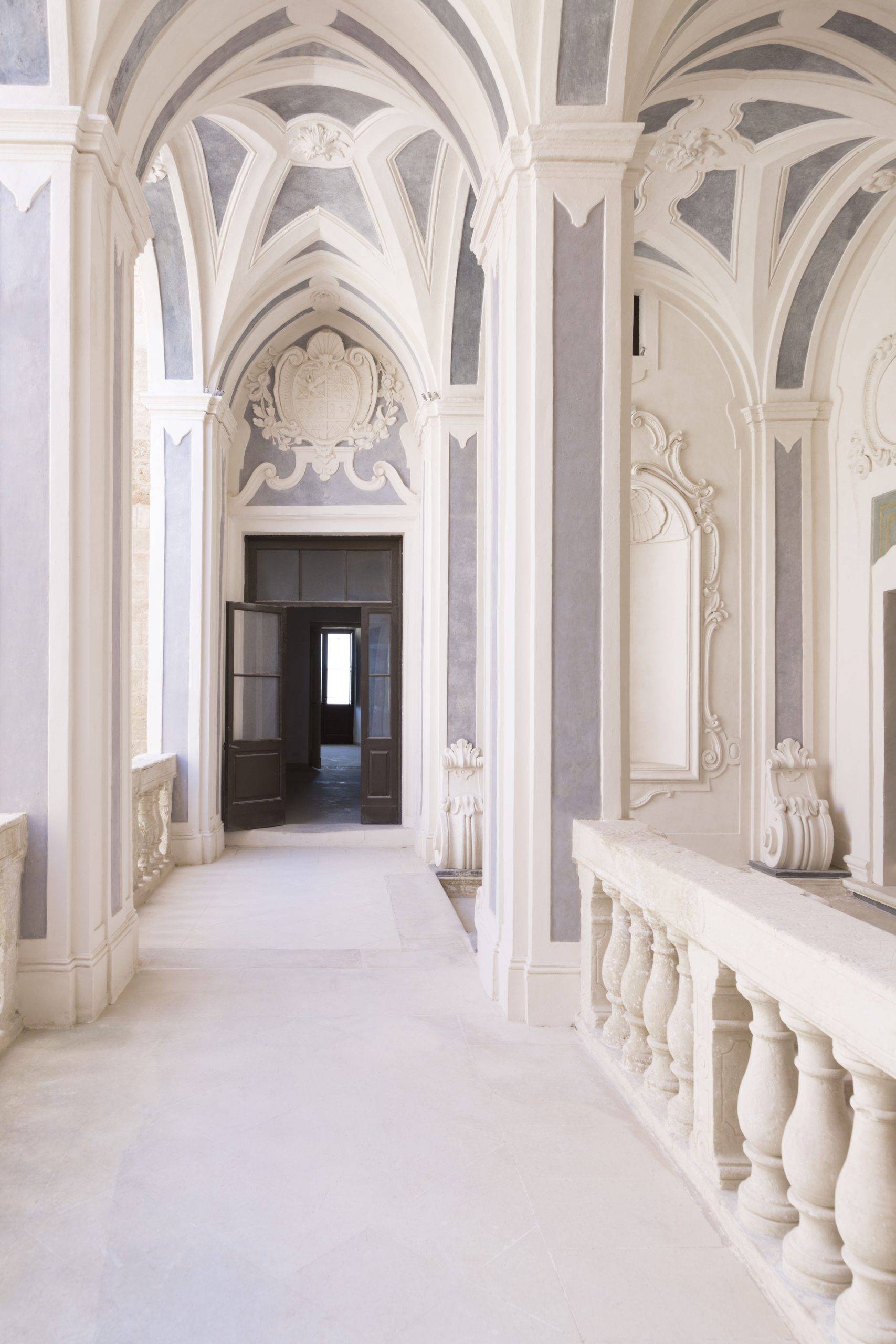 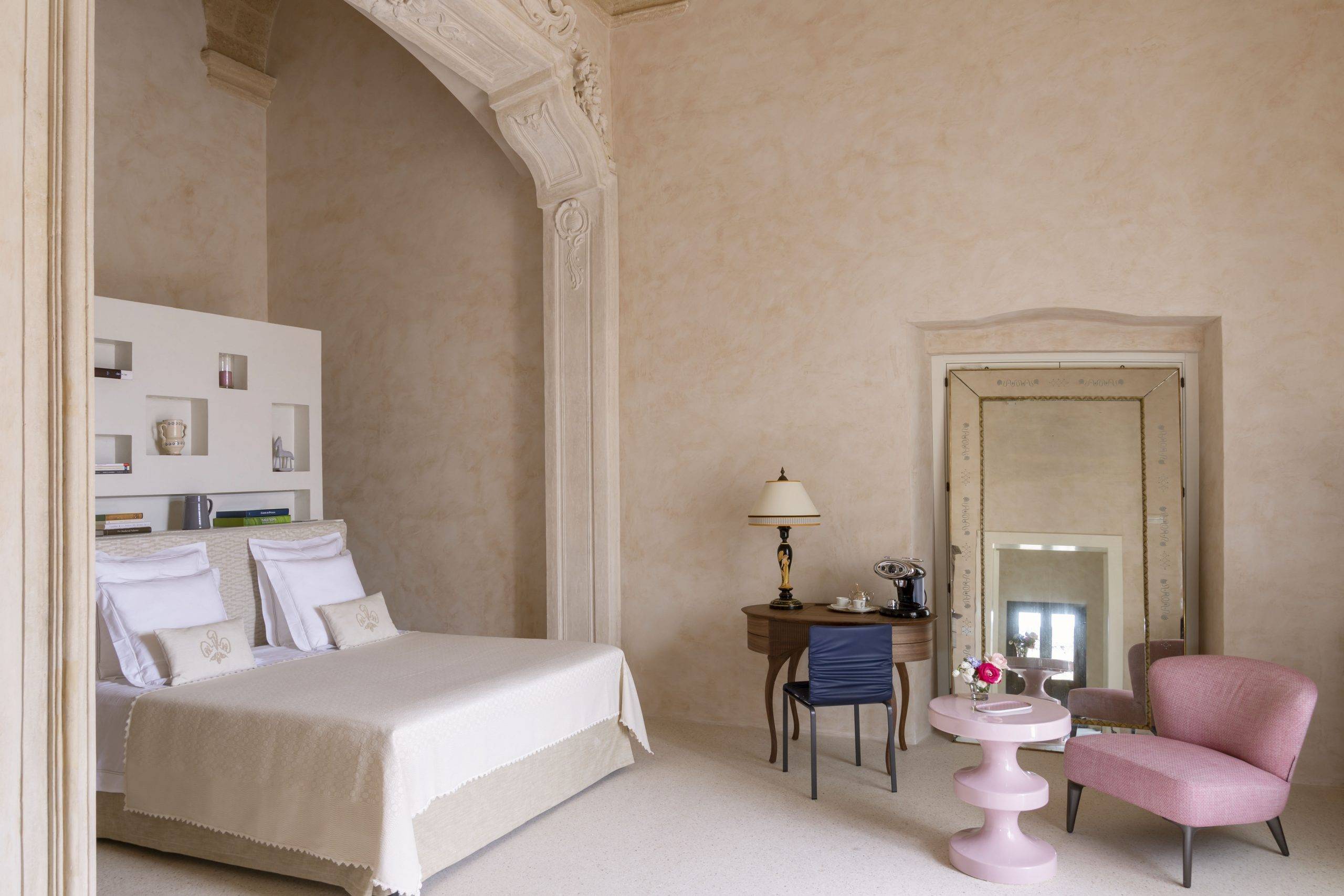 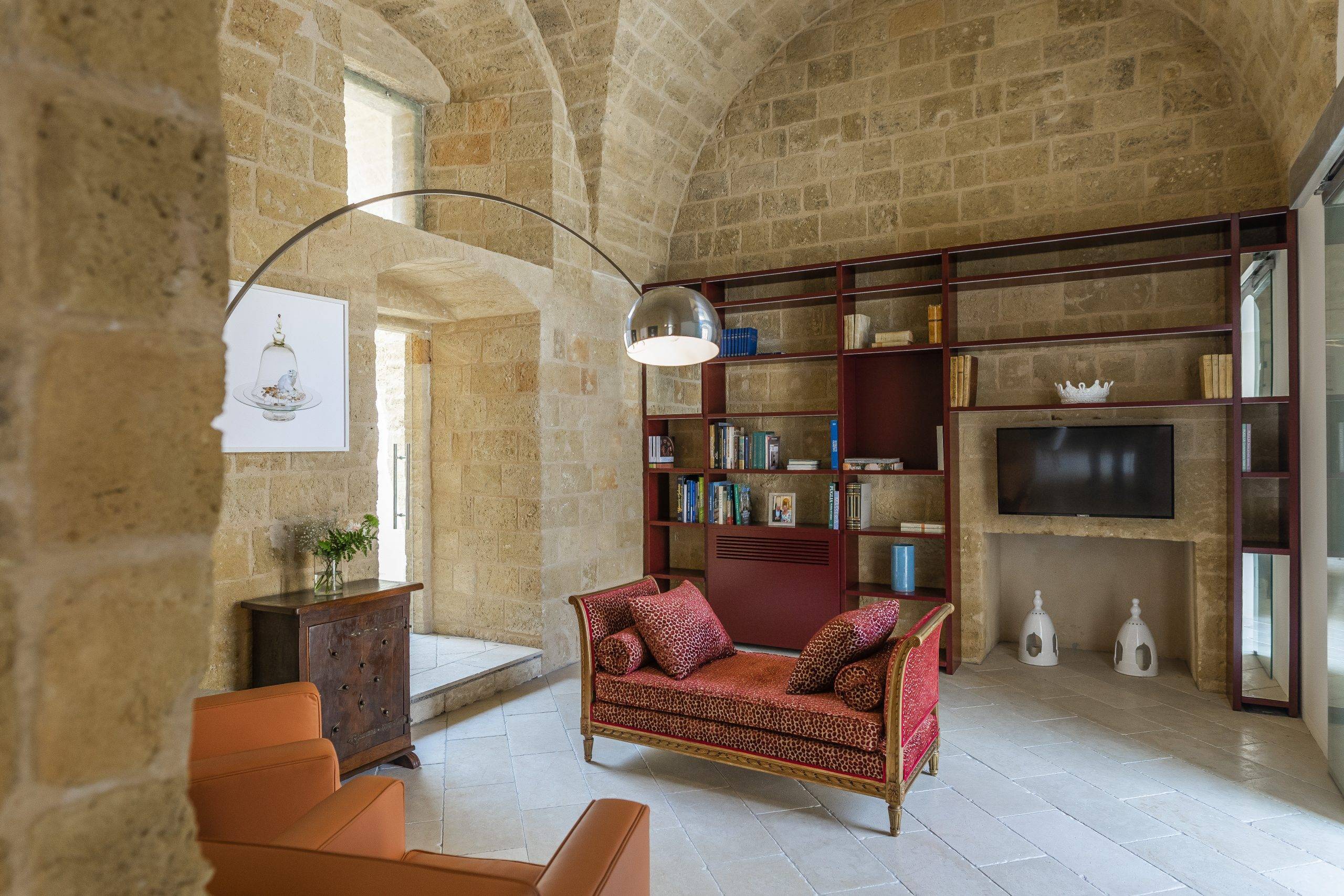 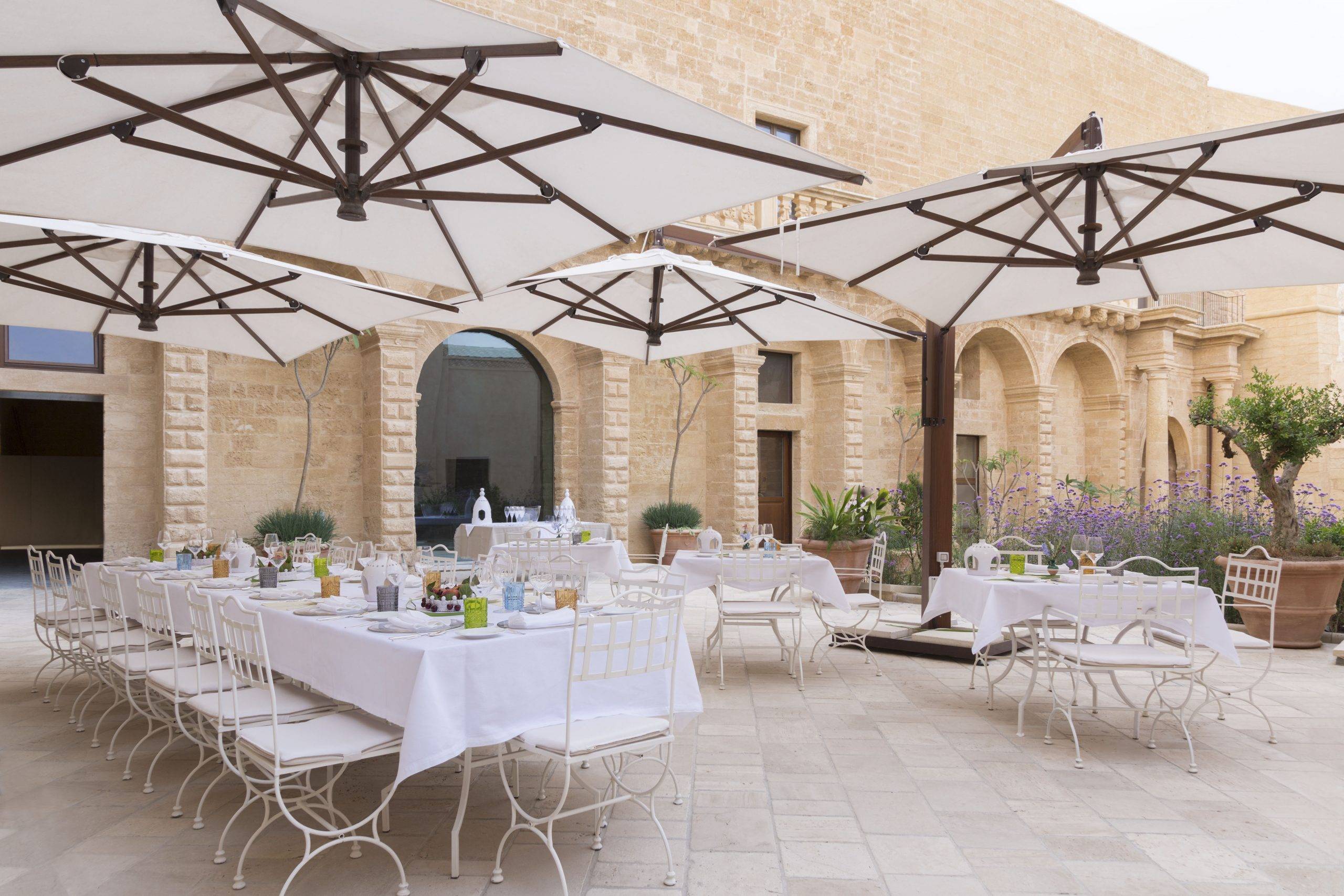 Nestled on Italy’s south-east tip is the Castello Collection, a beautiful set of authentic Italian venues that are quickly becoming the country’s leading culinary destination. From a restored 17th century castle to a destination restaurant and revered cooking school, this luxurious retreat is a haven for foodies.

Castello di Ugento, located in the southernmost tip of Puglia known as Salento, has watched over the town of Ugento for over a thousand years. This 17th century castle has now been lovingly restored by Massimo d’Amore, 22nd descendent of the d’Amore family and his partner Diana E. Bianchi, converting the monument into a nine-bedroom boutique hotel. Offering so much more than just a hotel, the Castello and its sister property Masseria Le Mandorle has been the culinary hub of the region. Food is truly embedded within the DNA of the property, and it is now home to destination restaurant, Il Tempo Nuovo and world-renowned cookery school, the Puglia Culinary Centre. It is so prestigious,  it is the official Italian partner of the renowned Culinary Institute of America (CIA), hosting students from September – March for a Concentration in Italian Cuisine.

A HISTORICAL HOME IN PUGLIA

The Castello has an incredible history and is a landmark in Puglia, appealing to both hotel guests and day-trippers alike. Originally built on Messapian remains, the Castello was transformed by the Normans into a defense tower in the 11th Century. After it was destroyed by marauding Turks, it was restored in the 17th century by Italian nobles. In 1643, Don Pietro Giacomo d’Amore acquired the town of Ugento and its estate. Castello di Ugento is still owned by the same family over 377 years later and offers exclusive tours of the castle. Today, the Castello is home to its own museum, where visitors can enjoy a series of curated cutting-edge exhibitions and art installations, alongside a selection of original frescoes, completed by the family in 1697, depicting scenes of love, mirroring the d’Amore family name.

AUTHENTIC DESIGN WITH A CONTEMPORARY TWIST

Massimo and Diana are the visionary team behind the Castello’s dramatic renovation, under the expert guidance of the Studio Associato Carafa Guadagno in Caserta, which assisted with the highly technical, architectural and sensitive restoration. Diana also personally oversaw all the interior design of the property, managing to perfectly place light and contemporary furnishings within the Castello’s historical shell. Each of the nine suites are individual, featuring modern pieces of furniture by top Italian designers including Cassina, Poltrona Frau, Minotti, Ceccotti and B&B Italia. Rooms are also peppered with beautiful antiques and vintage finds, including handmade Italian Canaletto armoires. Ground floor rooms open into a cobbled courtyard close to the aromatic garden, while The Master Suite della Rosa and Corte Giardino boast 19th century, star-vaulted ceilings and access to a private patio. Thanks to its boutique size, the entire Castello can be booked exclusively, for special celebrations and magical weddings. The castle offers a spectacular backdrop for private receptions of up to 150 guests. Massimo and Diana will continue the restoration of the historic Castello, working to uncover new areas over time, allowing returning guests to discover something new each time they visit.

Culinary excellence was front of mind during the property’s refurbishment. The gastronomic journey takes guests to all corners of the property, from the historic 18th century kitchen garden and private dining experiences in the excavated foundations of the castles Norman Tower, to meals at stand-alone restaurant Il Tempo Nuovo and cookery masterclasses in the state-of-the-art teaching kitchen.

Il Tempo Nuovo restaurant is a sleek gourmet eatery, showcasing mouth-watering seasonal specialities created by Exec. Chef Tommaso Sangueldolce and his team. Fresh fruit and vegetables from the kitchen garden, alongside local market produce is used in the traditional Puglian dishes, which have been reimagined and brought into the 21st century with a delicious twist. The fine-dining restaurant is set in the vaulted room known as La Torre Scoperta, complete with a glass floor revealing a Norman Tower that was unearthed during the renovation. Guests can sit at the Chef’s Table in the former 17th century storage and bakery kitchens, which have now been turned into a sophisticated open kitchen.

Those wanting to master the skills of Italian cooking themselves, can spend time at the Puglia Culinary Centre, which is so much more than an Italian Cookery School. The transformed storehouses attract international students from the Culinary Institute of America for a course in Italian Cuisine, with a focus on the eno-gastronomic culture of Puglia, known as ‘the breadbasket’ of Italy, as it is a fertile land that produces the majority of the country’s olive oil, wheat and wine. Cookery courses, in both English and Italian and olive oil masterclasses are led by Chef Odette Fada and her expert team and classes lessons in Traditional Pugliese Cuisine are available to all, as well as various themed day-courses. Local ‘nonnas’ make regular appearances, to demonstrate the recipes passed down to them over generations. Cookery classes include visits to the local market to select the freshest produce and walks in the on-site kitchen garden to hand-pick herbs. The Puglia Culinary Centre is the region’s most sophisticated teaching kitchen, complete with state-of-the-art, customised equipment from Electrolux Professional.

A dedicated ‘Grape & Wine Academy’ project is also underway, which promises to enhance the existing wine experiences at Castello. The Academy will be situated within an antique cistern, where rain-water was collected in the 16th century, while the wine storage area is built around and inside the 1000-year-old Norman square tower. The Academy will fully open by the end of 2020 and will take guests on an immersive grape and wine historical journey, educating guests on the fascinating history of the grapes in area – the first to arrive on the Italian Mediterranean shores.

The Castello Collection also comprises a second hotel – Masseria Le Mandorle, a more accessible property, ideal for those travelling to Puglia with a group of friends or a young family. Situated just five minutes from Castello di Ugento, this 12-bedroom hotel is a newly restored 18th century farmhouse, on the cusp of the historical town and just 8km from the beautiful local beaches. Guests of the Masseria can use all the Castello facilities and vice versa. The Masseria offers a beautiful swimming pool, a multi-sport field for tennis, basketball, five-aside football and volleyball, a jacuzzi terrace, state of the art fitness room, restaurant and bar.

It is the d’Amore’s personal connection to the region of Puglia, that allows them to provide an authentic experience to all visitors. Alongside their concierge team of expert guides, they help guests to explore Salento – a region overflowing with cultural riches. This is a year-round destination with a warm and sunny climate similar to Morocco, due to its location in the South of Italy. Salento is home to various historical sites from Messapian dolmens to Roman amphitheatres and guests can wander through villages where Greek is still spoken or meander the maze of tangled streets and bustling fish market in Gallipoli with its Greek, Saracen and Baroque heritage. The Castello team will also curate personalised tours of the region, with expert guides to nearby Lecce and its 12th century mosaics in Otranto, frescoed churches of Galatina and the picturesque port of Santa Maria di Leuca. Castello di Ugento is also just 10 minutes from some of the best beaches in Italy, complete with powder white sand and crystal-clear waters of the Ionian sea. It is also 25 minutes form the tip of the heel of Leuca and the Adriatic sea, with its dramatic coastline and grottos accessible only by water. Thanks to their relationship with the locals, Diana and Massimo can also arrange the likes of private tours and tastings at a family-run wine estate dating back to the 11th century as well as experiences at a local organic olive oil farm.

Castello di Ugento is open between March – November and rates start from €400 per night on a B&B basis. The closest airport is Brindisi. Click here to book.

Masseria Le Mandorle is open between March – November and rates start from €250 per night on a B&B basis. Click here to book.