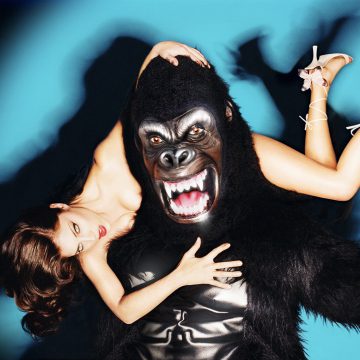 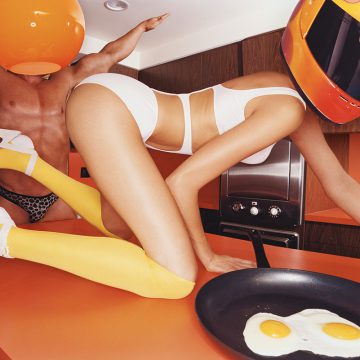 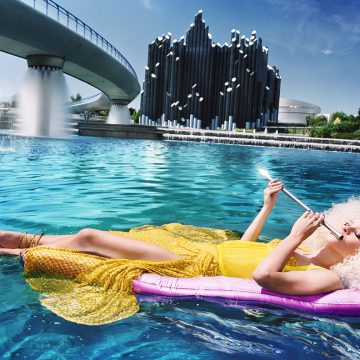 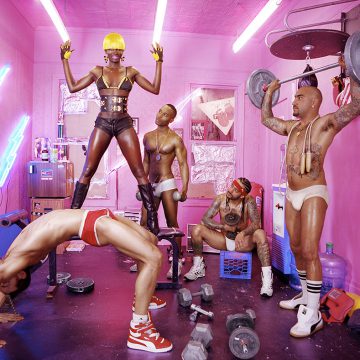 The diversity and variety of David LaChapelle’s work have no boundaries. His colour-saturated works are usually chock full of celebrities, cultural delirium and religiosity, writes Eva-Luise Schwarz exclusively for FOUR International edition…

Photographer and director David LaChapelle is one of today’s most respected artists. Once called “the Fellini of photography”, he expresses cultural criticism through beauty, colour and boldness.

LaChapelle was born in Connecticut in 1963. After training as a fine artist at North Carolina School of the Arts he moved to New York at the age of 17. Upon his arrival, LaChapelle enrolled at both the Art Students League and the School of Visual Arts. Already demonstrating outstanding talent and vision even though he wasn’t yet out of high school, LaChapelle began showing his artwork in galleries throughout the 1980s. His work famously caught the eye of Andy Warhol who offered him his first professional job to shoot for Interview magazine. By creating fine art images he came into his own and his style soon evolved into an idiosyncratic and highly personal combination of reportage and surrealism. He went on to shoot for a variety of top publications—Vogue, Vanity Fair and GQ among others—and was hired to create some of the most memorable advertising campaigns of his generation.

He also started branching out to shoot album covers and direct music videos, live theatrical events and documentary films. His directing credits include music videos for artists such as Christina Aguilera, Moby, Jennifer Lopez, Britney Spears, The Vines and No Doubt. His undoubtedly most prominent stage work was Elton John’s The Red Piano and the Caesar’s Palace spectacular LaChapelle designed and directed in 2004.

Two years later, in 2006, the time seemed right to minimise his work on any commercial aspects and concentrate his focus back on fine art photography. What followed was a period of intense creativity resulting in remarkably striking images that garnered numerous awards. LaChapelle’s work was showcased around the world in the most prominent museums and galleries from Milan, Prague, Tel Aviv and Berlin to London, Paris and Warsaw.

LaChapelle’s work might be brash, but he presents his critical narrative like a master storyteller. Through vivid colours, surreal and even outrageous dismantling of his subjects, he charges every detail with symbolic meaning and thus comments on mortality, consumerism, politics, religion, the brevity of life, or beauty and spirituality, all in his unmistakably glossy, captivating and cutting-edge style.

One of his most recent showings took place in Brussels at the Maruani & Noirhomme Gallery in which he explores gas stations, seen from some future place and time. He uncovers them as architectural relics of a lost world, like the Aztec temples or Easter Island. Future cultures, with other concerns, will wonder about their significance. How did they get there? Why where they built? How did they contribute to the rise and fall of this civilization?

The gas stations were shot on location in the rain forests of Maui. This ancient jungle can engulf the past, and at the same time represent the very matter that created the fuel. Recalling the calm emptiness of an Edward Hopper painting, Gas Stations are a new take on the American landscape.

For the exhibition LAND SCAPE at the Paul Kasmin Gallery in New York, LaChapelle continues this train of thought. In the Refineries series, LaChapelle treats these scenes as shrines to the product and the lifestyle it makes possible.

Bathed in an ethereal light and aglow with an otherworldly quality, we are as captivated as we are repelled. While decoding the construction materials and contemplating the surroundings provides delight, what the artist would like us to remember are the decidedly unmagical consequences of what occurs in the refineries.

In the Museum der Moderne Salzburg, LaChapelle contributed pieces to an exhibition entitled Flowers & Mushrooms. With aggressive colour he presented impressive stately floral arrangements, continuing the baroque symbolism of opulence, while at the same time emphasising the impending moment in which excess can take on an all-consuming character.

Last year LaChapelle took on a commission for the Bayerische Staatsoper in Munich, where more than 20 singers who are closely connected to the opera house were selected for brand new portraits that are now on constant display alongside and in dialogue with the historic paintings. LaChapelle photographed the soprano Diana Damrau whose most famous role was The Queen of the Night from Mozart’s The Magic Flute.

Most recently, LaChapelle got behind the lens to create a Christmas card for the Kardashian family. It includes a wide-shot of the family with the women dressed in all black standing among broken mannequin pieces, pyramids and photos of the Kardashian sisters.

Art Talks | How to buy art that will increase in value

As more and more people look at buying art for their homes and viewing pleasure, FOUR speaks to Jenny Ogilvie, director of contemporary art gallery, Ink_d, about how the decision to pay more for originals or limited edition prints is often justified by looking at art as an ‘investment’…

#FOURNews | The art of champagne with Ruinart

This February, Ruinart, the first established Champagne House, will be launching a sensory experience allowing visitors to discover the history, origins and all aspects of the Chardonnay grape…

FOUR speaks to British architect Sally Mackereth and carpentry specialists Jack Badger, to find out how they came to be involved in the newest collection from royal salute whisky that retails at £30,000 and has only 21 sets in existence…