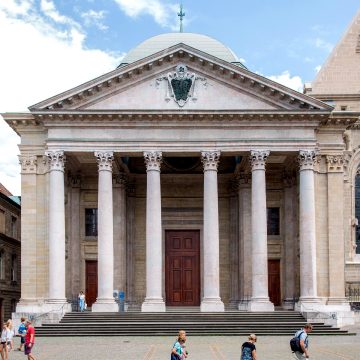 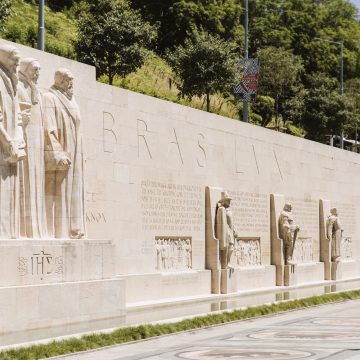 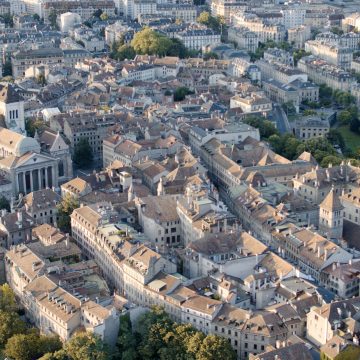 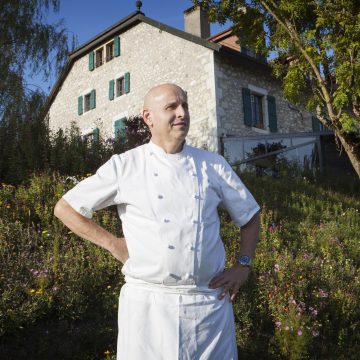 Rowena Marella-Daw explores the highlights of the Peace Capital.

After indulging at FESTICHOC, a two-day sojourn walking around Geneva was a welcome opportunity to burn off some calories while discovering the city’s hidden treasures. The Old Town (Vieille Ville) rises 25 metres above the lake, although you wouldn’t know it’s there until you tear yourself away from all the glitz and glamour of Rue du Rhone. And it wasn’t until I traipsed up the cobbled steps to the top that I discovered Geneva’s past.

At the town’s pinnacle is St. Peter’s Cathedral, former site of a 4th century Roman temple. Originally built as a place of worship for Roman Catholics, in the 16th century it became the stronghold of the Protestant Reformation movement led by preacher John Calvin. The austere interior bereft of saintly figures allows visitors to focus on the architecture, stained glass windows, ceiling frescoes, and the elegant symmetry of pillars and arches. The best part was climbing 157 narrow steps to the tower’s open-air gallery for an exhilarating bird’s eye view of the city and its environs. On a windy day, the adjacent Gothic steeple almost within arm’s reach felt eerie and mysterious.

Around the corner from the cathedral is the Old Arsenal, where cannons used to defend the city from enemy sieges are on display along with three impressive frescoes depicting Geneva’s historic highlights. This open gallery on the ground level served as a granary during the 17th century, then became a military storehouse in the late 19th century.

Maison Tavel, a cultural-history museum, occupies the oldest private house in the city, and exhibits are spread across five floors. The Magnin Relief is a fascinating depiction of what Geneva was like as a walled city in the mid-19th century. Elsewhere in the museum, my eyes were drawn to a curious 19th century portrait by artist Jean-Baptiste Bonjour of ‘La mere Robineau’ (Etienne Robineau), mother to 14 children, whose prominent beard made her a memorable character in her time.

One exhibition that truly deserves a visit is the Red Cross Museum, where the permanent exhibition ‘The Humanitarian Adventure’ documents the work of the International Federation of Red Cross and Red Crescent Societies (IFRC) since their founding in 1919. The exhibition is divided into three themes: Defending Human Dignity, Restoring Family Links and Reducing Natural Risks. Interactive displays bring the audience in touch with witnesses (Chamber of Witnesses) and victims of oppression, wars and natural disasters through testimonials, interviews and documentaries. Within short walking distance is the United Nations Office at Geneva (UNOG), the second largest of the UN’s main offices.

Wellbeing in the city

A balanced lifestyle comes naturally to the Swiss. They appreciate quality wine, cheese, chocolates and food, but all in moderation – and they also like to keep fit and active. When not skiing, cycling or hiking, Geneva’s denizens have many options to stay healthy. For starters, there’s Alive Geneva, a one-stop oasis of wellbeing that combines a fitness studio for yoga, meditation and Pilates classes, life therapies, along with a vegan café and superfood store. After a one-hour private meditation class with yoga expert Evora Dupre, I felt a sense of calm, and learnt a powerful Sanskrit mantra useful for tackling life’s challenges. The dishes and desserts served at the vegan café are tempting too. Another Zen moment was chilling out on the heated rooftop pool at Bain Bleu Hammam & Spa in Genève-Plage. The spacious 250sqm pool has various Jacuzzi-style massage stations that do the work while you gaze at vistas of Lake Geneva.

Geneva is home to some of Switzerland’s finest restaurants, notably Domaine de Châteauvieux, which is in a class of its own. Set in the wine-producing district of Satigny, this historic restaurant and boutique hotel surrounded by vineyards oozes with character and charm. Ancient brick walls dating back to the 13th century bring a rustic ambience to the restaurant and its interiors, complemented by exquisite food from award-winning Chef Philippe Chevrier, who took over the property in 1989.

Philippe adds plenty of panache to traditional French dishes. My surprise tasting menu was a delightful balance of seafood (Seabass tartar marinated with candied ginger, carrot coulis; Norwegian scallops with amber beer emulsion), meat dishes (Deux Sèvres pigeon breast roasted in Jerusalem artichoke mousseline) and seasonal ingredients bursting with flavours and textures, all presented with artistic aplomb. Although the phrase ‘force-fed’ duck liver may not go down well for some, I was impressed that they catered to my dairy-free request with creative alternatives, and the wines from their own vineyards were excellent, such as the Assemblages Les Vins de Philippe Chevrier, 2015 (Cave de Genève, Genève). The two Michelin star restaurant was also awarded three stars by Bottin Gourmand, and in 2002 Gault & Millau gave it 19 points, while also naming Chevrier Chef of the Year. Would I go back there? Absolutely.

Back in the Old Town, Brasserie-Restaurant de l’Hotel-de-Ville is an institution, having served food and drinks to countless soldiers over the centuries. Since Mr. Jean-Yves Glauser took over the restaurant 24 years ago, it has become a favourite with dignitaries and tourists alike. The cosy, old world ambience is to blame if the ground floor tables are fully booked, although more tables are available in the quieter dining room upstairs. The menu of mouth-watering dishes made it tricky to choose. The Cassolette de calamars à la Luzienne and Cod fillet with piquillo pepper sauce and black rice were excellent. The service here is old-school – they don’t engage in small banter or fawn over clients. My server looked as if he’d been here forever, and that’s what gives this place its endearing character.

Hotel Metropole Geneve is well positioned in the heart of the city – one side faces the iconic Rue du Rhone, the other has views of Lake Geneva. This hotel bears all the hallmarks of a quintessential Genevan retreat, ensconced in an elegant mid-19th century building where period details mingle with contemporary accents. The rooms are individually styled, and there’s one to suit every taste. Dining options include Gusto Restaurant, which works up the appetite with its Roman-inspired menu. Guests in need of refuelling from retail overload can chill out at the MET rooftop bar for refreshing cocktails and panoramic views of the lake and Jura mountains. Hotel Metropole is within walking distance of the old town and bus connections are accessible from outside the hotel entrance.

Find out more information about Geneva at Geneva Tourism |  www.geneve.com