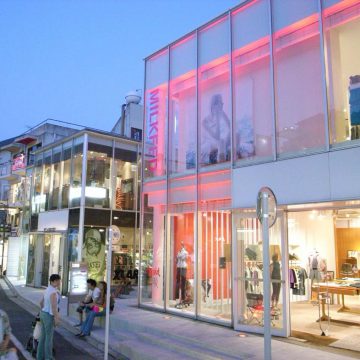 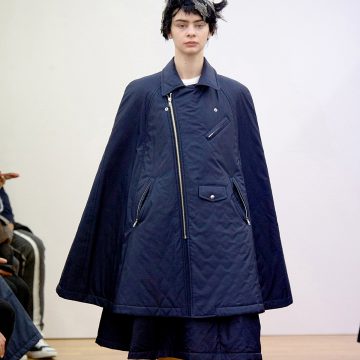 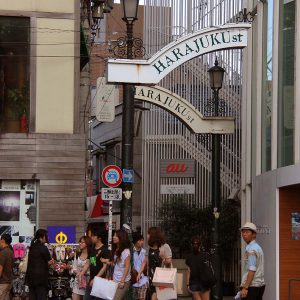 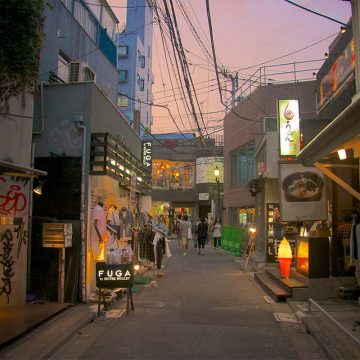 Tokyo, a metropolis of creativity and culture, is famed for many things, including its fashion-forward Harajuku neighbourhood. Sophie Cater heads to the area to explore the fashionista’s heaven…

Neon lights, scuttling hoards, beautiful parks, Michelin star restaurants, cherry blossom and technological eccentricities; these are just some of the images that popped into my mind as I embarked on my fleeting two day visit of the Japanese capital. But little would I know, I was going to spend most of the time in a veritable fashion house.

Harajuku has been at the forefront of Tokyo’s fashion scene, renowned for its hoards of girls clad in miniskirts, bright hair, knee-high stockings, and platform shoes, or men dressed as their favourite manga characters. Naturally, it’s vital to explore more. Wading through a touristic side-street of garish teenagers, it soon dawned on me that they were just your regular teenager, lapping up what was ‘cool’ in the shops. I held my breath and waded further until I came to an opening of quaint boutiques and independent designers’ shops. With a spring in my step – albeit fatigued by the extreme time difference – I steadily decimated my bank account on what were some of the most wonderfully unique and well-made clothes I’ve come across to date. I wandered the streets, falling deeply in awe of this area, rich in cultural eccentricities and history.

Originally built as a small village in the Edo period around the fifteenth century, Harajuku became a popular hub in Tokyo when it was restored and renovated after the First World War. During the post war occupation, the area became US military barracks and was unashamedly Westernised. The shops, which were meant for the military families attracted young Japanese locals, curious about Western culture. And so the fashionable neighbourhood was born.

Housing athletes from the 1964 Olympic Games and becoming home to the new Laforet fashion mall in 1978, Harajuku boomed. Now, the area is a fashionable melting-pot where the youth try out their new and eccentric styles, exquisitely talented designers practice their trade and where highly respected fashion houses settle their stores. Essentially, it’s Tokyo’s eclectic, dynamic and fashion-forward Champs-Elysees.

From Cosplay – a style that included dressing up as a comic, gaming or sci-fi persona – to Lolita – the stereotypical knee-high socks, corset and petticoat skirts – teenagers wander around Harajuku, testing out their new look. Although they play a big part in Tokyo’s subcultures and influence the teenage masses, the styles are not, let’s say, up my street. (Admittedly, I was horrifically jet-lagged and found myself utterly out of my depth, surrounded by ‘Harajuku girls’, as Gwen Stefani hailed them, showing off their best weekend outfits.)

Needless to say, my Harajuku comfort zone lay with the high-end designers in their tiny shops and minimal lighting. With competition rife between all the designers striving to break through the global market, it’s unsurprising that each shop was adorned with exquisitely made, unique garments. Combining the absolute madness of some of the area’s trends, the dog-eat-dog competition and Western-Eastern fusion fashion, a cutting-edge fashion blueprint has become apparent.

Illustrious designers have emerged from the streets of Harajuku – Yohji Yamamoto, Issey Miyake and Rei Kawakubo of Comme des Garçons as mere examples. Although their blueprints have similar elements – innovation, eccentricity and technological avant-gardism, they remain distinguished by their own peppering of unconventionalities. Comme des Garçons’ womenswear aims to cater to the woman who is unscathed by her husband’s thoughts, whereas Issey Miyake seems to reinvent traditional Japanese forms, injecting them with modern technologies and new techniques.

Compared to the haute-couture we usually see on catwalks, Harajuku’s designers push boundaries and innovations, echoing the avant-garde and eccentric wave that has fused with Tokyo’s deeply rooted traditions and culture. Needless to say, I left Tokyo with an extra suitcase and a desolate purse.

Shinobu Namae | The Francophile in Tokyo

Simple yet incredibly more-ish, this recipe from Claudio Cardoso will satisfy your midweek sashimi cravings…Enjoy!