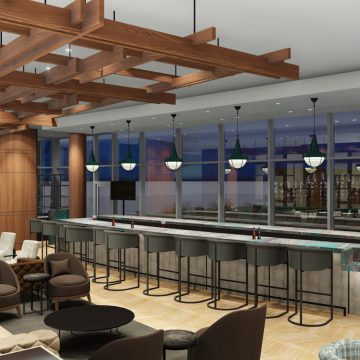 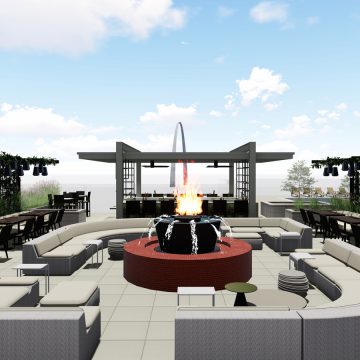 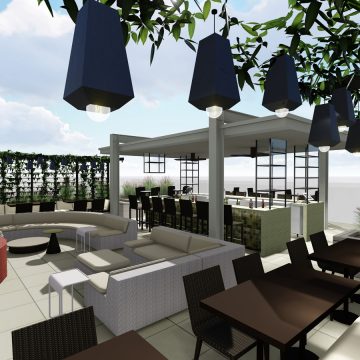 Located on the iconic 8th floor of Four Seasons Hotel St. Louis, Cinder House will showcase sweeping views of the Gateway Arch and downtown skyline.  The menu will centre around the kitchen’s wood-burning hearth, for talented chef Gerard Craft’s take on wood-fired cuisine.

“Some foods taste so much more complex when cooked on a wood fire,” Craft told us. “Grilling is a universal technique so the menu reflects many different cultures but the food will be heavily influenced by the grilling mecca of South America.”

Craft’s focus on simple foods with bold flavours will be highlighted throughout the menu and it will include several steak selections and rotating grilled items of the night. From grilled pickles to grilled lamb ribs in soy, lime and garlic with a mango-honey glaze, dishes feature enticing techniques and flavours.

Cinder House’s design is a timeless, modern interior, deeply rooted in South American and European aesthetics.  The new restaurant will sprawl from its warm wood and stone interiors, to the lofty new outdoor lounge and upbeat bar area on the Sky Terrace.

“The city of St. Louis has greatly transformed since we opened our doors nearly ten years ago with a burgeoning culinary scene,” says General Manager Alper Oztok.  “Craft has been a leader and advocate for St. Louis’ dining community, so we are proud to partner with him to deliver an elevated experience to our guests with genuine Midwestern hospitality.”

Gerard Craft is the executive chef and owner of Niche Food Group in St. Louis, Missouri. The project is expected to begin in early May and be completed in early August, 2018.  During such time, Cielo Restaurant and Bar will continue to service its guests in the 8th floor lobby of Four Seasons Hotel St. Louis for all three meal periods.