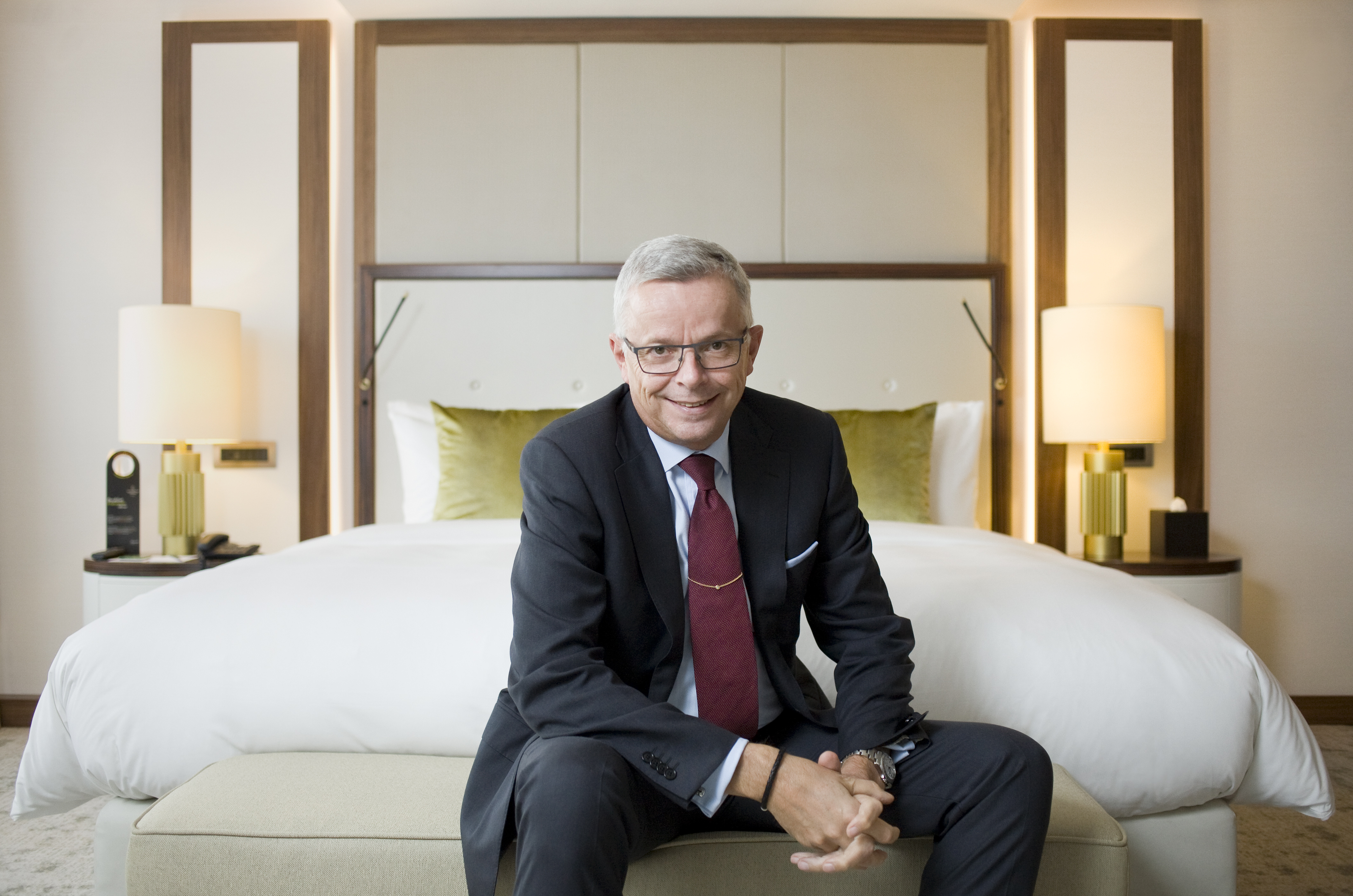 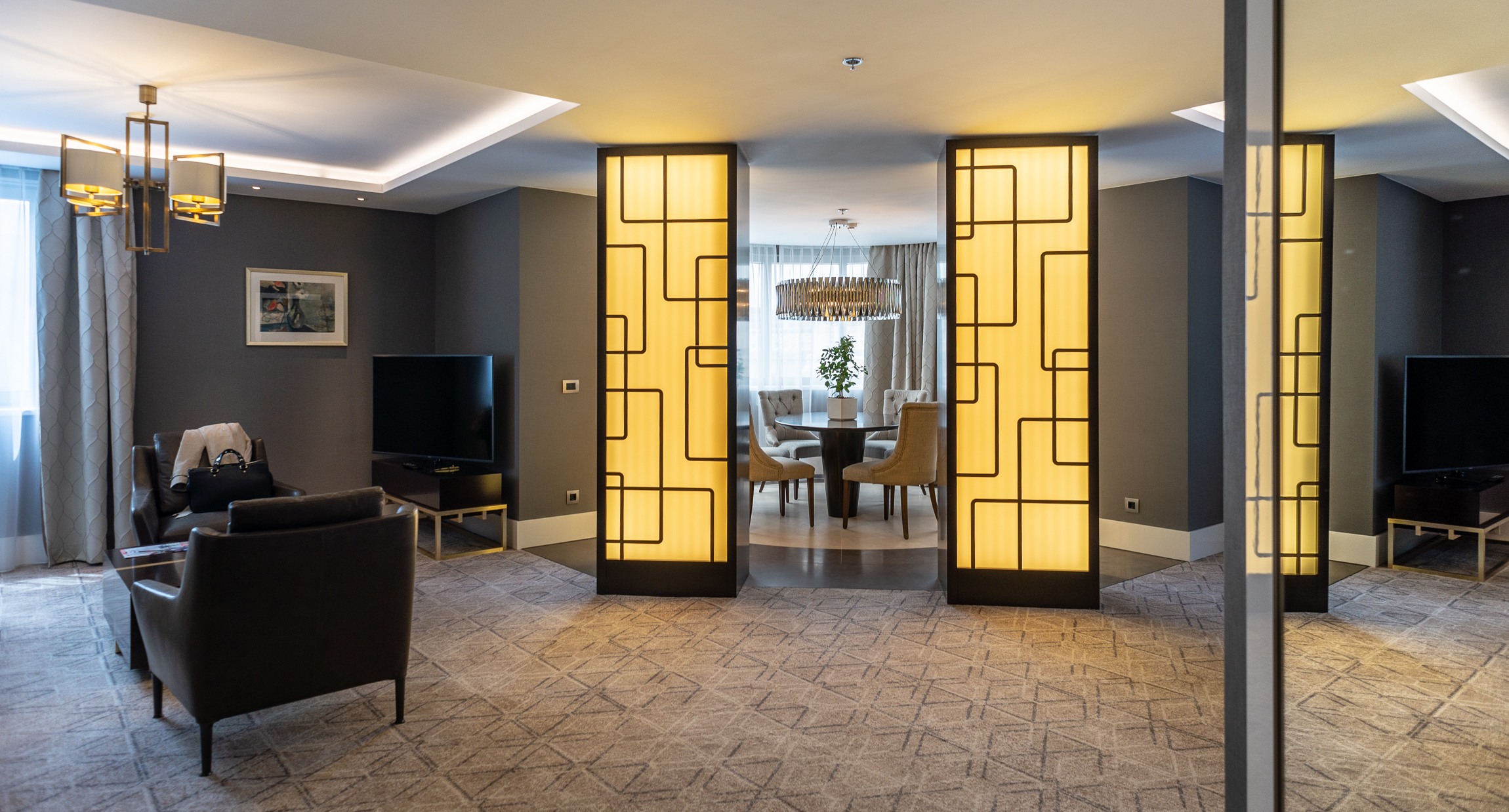 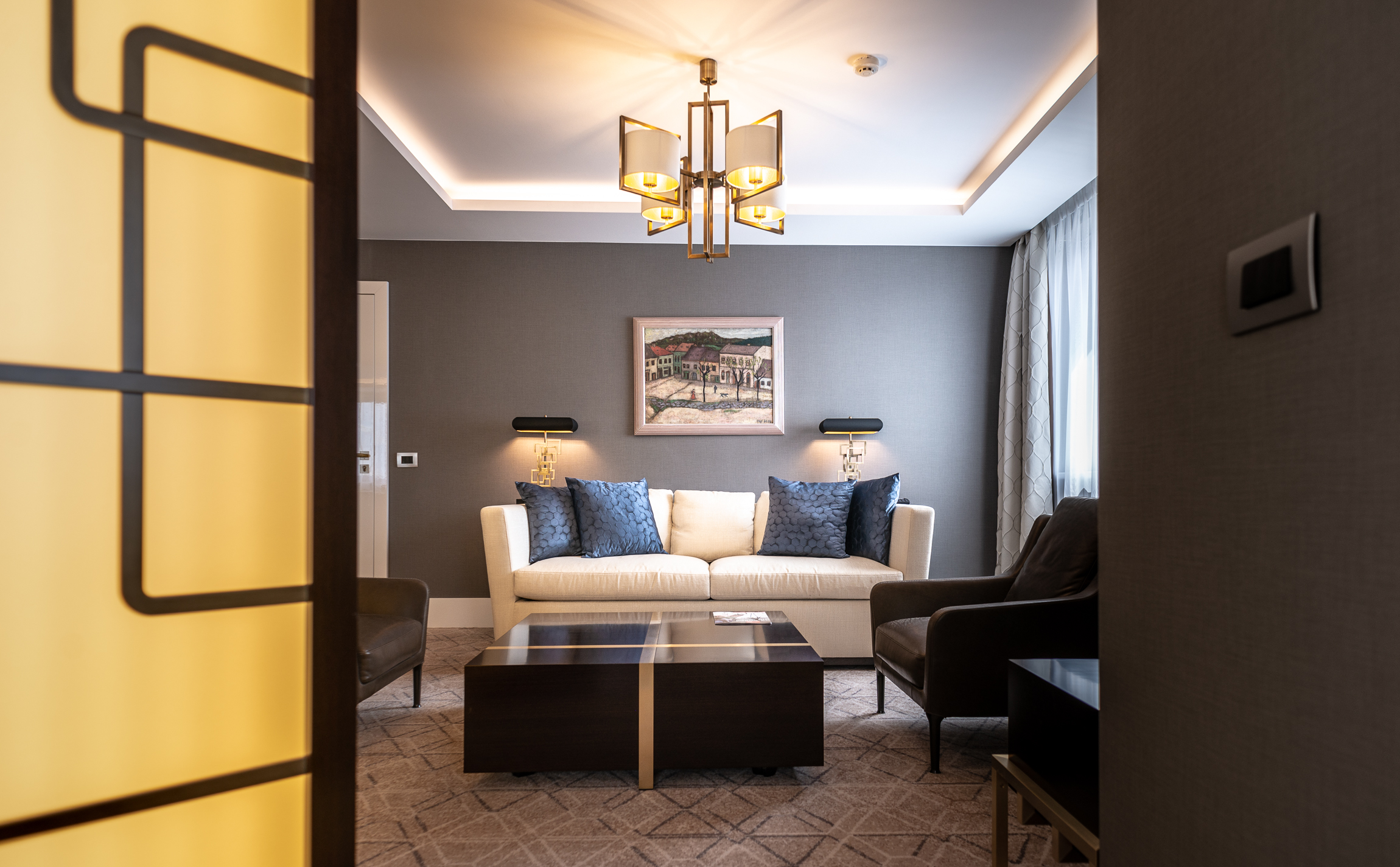 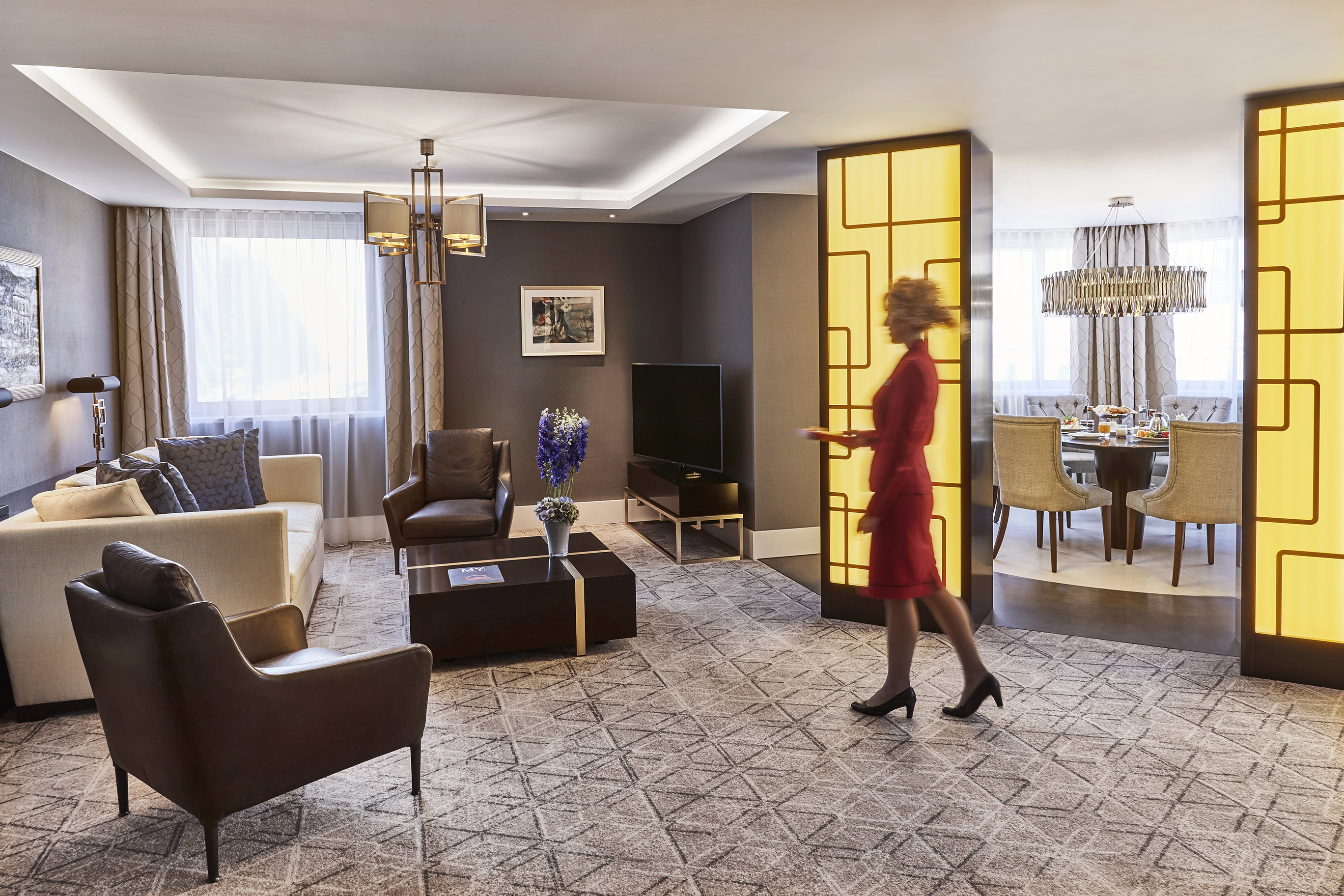 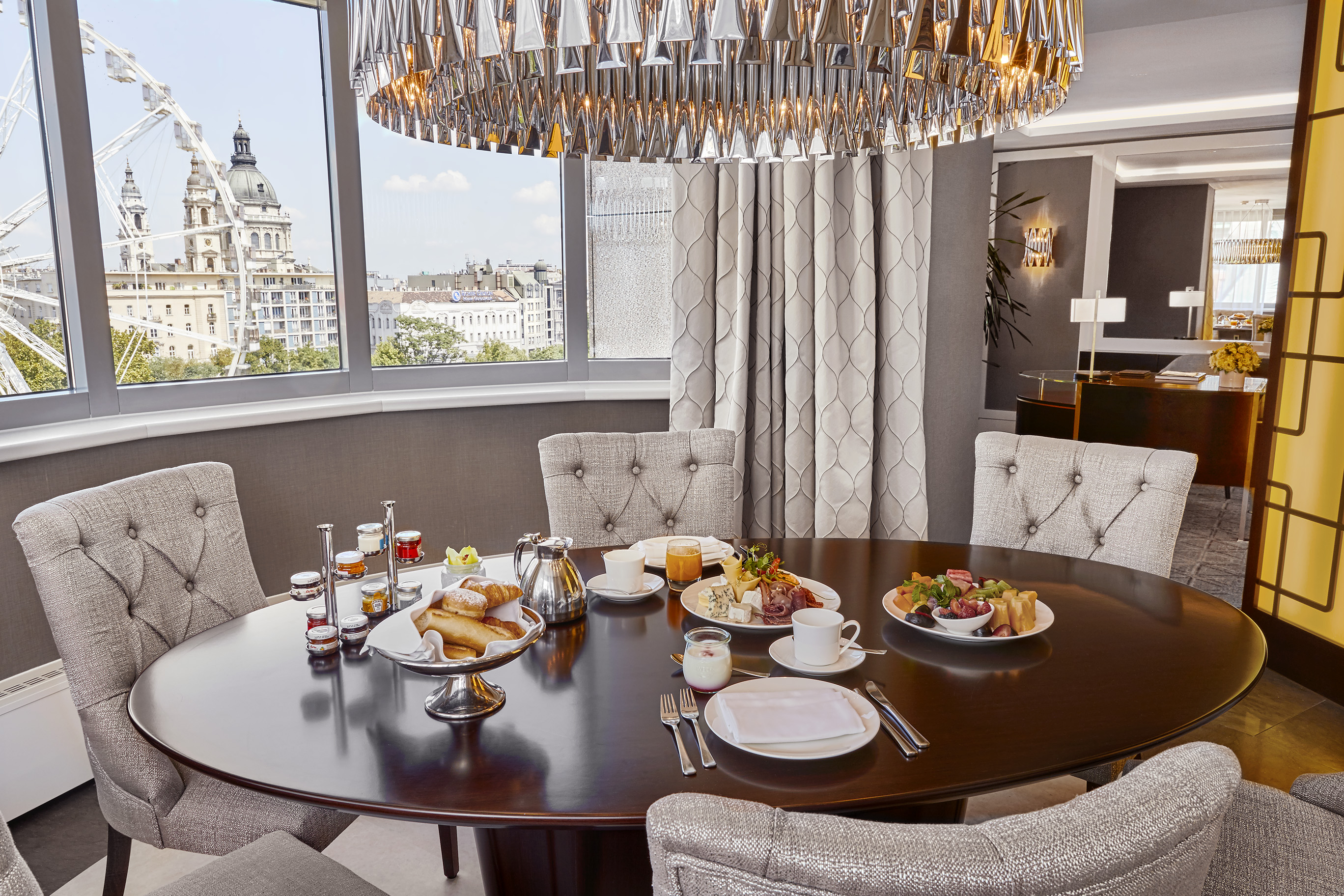 FOUR catches up with Stephan Interthal, the General Manager of Kempinski Hotel Corvinus Budapest, to find out more about the luxe hotel and its fresh new look after recently undergoing extensive renovations.

In a lot of ways, Kempinski Corvinus has not just been a market leader but an absolute first in Budapest. It was the first privately commissioned, purpose-built five-star hotel after the fall of communism. An international hotel company with international shareholders. Imagine how extraordinary that was in this fledgling free market. Paradoxical as it may sound, for 27 years, this hotel’s history has been all about looking and thinking forward into the future of the hospitality business.

Tell us a bit about the renovation of the hotel. What sparked the need for a renovation?

From a physical point of view, there is a lot of wear and tear. But more importantly, the aesthetics of the times changes, and travelers have increasingly been expecting a sensory, design experience. Also, technology has moved on rather quickly, and we needed to upgrade some of the relevant nitty-gritty features in the rooms. We were also looking to utilise the Lobby space better, which gave home to our Gastronomic Quarter Downtown Budapest, and its diverse culinary outlets, such as The Living Room, ÉS Bisztró, ÉS Deli, Nobu, Blue Fox The Bar and the Promenade, which is where we show art exhibitions. What’s not so conspicuous is the events space on the second level, Ten Rooms, which follows the aesthetic logic of The Lobby, and provides the most flexible as well as the most state-of-the-art meetings spaces, among them creative rooms and boardrooms as well as a ballroom. To be ahead of the game in town meant we needed to be ahead of the curve – in broad terms, that’s what prompted the renovation through and through.

What exactly does the renovation involve?

It’s a comprehensive project, which started years ago, and will take one or two more to complete. After the Lobby and Ten Rooms, we embarked on a floor-to-floor reconstruction and refresh of the suites and rooms. In April, we finished Floors 3 and 4. In numbers, this is eight fully redesigned rooms and 12 suites, as well as the soft refurbishment of a further 94 rooms. This is after the redesign of nine suites and 25 Grand Deluxe Rooms on Floors 5 to 7, as well as the reconstruction of two Corvinus Collection Suites. We had completed the soft refreshment of a further 126 Superior and Deluxe Rooms on these floors. We offer the “newest old” five-star rooms and suites now in Budapest! The hotel also purchased 31 contemporary Hungarian works of art to complement the new decor of the renovated rooms and suites. These items became part of the hotel’s corporate Corvinus Collection, consisting of more than 1,000 pieces.

What is the inspiration behind the new design and décor?

We asked the internationally noted British designer Alex Kravetz to translate a Budapest-accented Kempinski joie de vivre into a specific design vision. His work for us features a soft colour palette of elegant gold, reserved patina and muted grey, as well as warm dark-brown wood. There’s a quaint contrast between the broader urban context of the hotel’s central location in the very heart of Budapest and colour references to the calm of nature, such as the yellow of the sun, and the green, yellow and white of field flowers. When you look out, you experience the electricity of the city; when you stay in, you unwind and recharge sensorial.

What makes the hotel so special in your opinion?

For various reasons at various moments of the hotel’s history, Kempinski Corvinus is always first or unlike any other hotel. The Corvinus Collection, the hotel’s own corporate Hungarian contemporary art collection, is, to this day, unique. We have the highest number of restaurants under one roof, amongst them Nobu. Our Ten Rooms meeting space is one of the most advanced and versatile in town, and in a central location. And, as I said earlier, with the renovation drawing to its close, we are the “newest old” five-star hotel in Budapest. And lastly, among the Kempinski hotels worldwide we are truly being watched as a ‘showcase hotel’ of the company.

The city is alive and bursting with electricity. There’s an ownership of the space: people go out and have fun not just in restaurants and clubs but in outside spaces like terraces and parks and open-air theatres and fairs. There’s an air of freedom about it. That feeds into and defines the overall vibe and ambiance of Budapest. The city is not just compact but also versatile: Pest is flat; then there’s the Danube, and Buda is hilly. Within easy reach of the city, still in the city, we also have spas, explore caves and hills. The city’s uniqueness is in fact that it has many unique attributes. There’s been a great deal of construction and renovation too, which makes this already sights-rich city very walkable as well as instantly Instagram ready. There’s also been a diversification in terms of what service providers have to offer: we now have six Michelin-starred restaurants, but we are also proud of our street food and ruin pubs. And last but not least, it’s a safe city.

Do you think there has been a shift in what people look for in their accommodation?

The sharing economy has upped the ante for us. Technically, anyone can provide accommodation. What not everybody can provide, however, is the expectable quality of service, the diversity of services under one roof, the security of the physical and service infrastructure, and the inimitable sense of being looked after and pampered. This means that our guests expect a whole lot more from us, not just a branded building with rooms and restaurants.

Can you tell us any of your favourite highlights from in and around the hotel?

I especially like The Living Room. It’s exclusive and comfortable, and allows you to take your time. In the evenings, for example, we have Ignite the Night, when daily at 6:00 pm, we open a bottle of champagne by sabrage and ease into the evening. On Saturdays and Sundays, we dedicate the mornings to variations of Eggs Benedict à la Kempinski Corvinus. Think oyster and bubbles. And each Saturday at 5 p.m. we are hosting a Kempinski Concertino at our Living Room in cooperation with the Ferenc Liszt Academy Budapest. Just outside the hotel, the Ferris wheel, Budapest Eye, takes you up to enjoy heights you can rarely experience, to look over the city like a bird.

Tell us about the culinary offerings at the hotel. What can guests expect and what are some of the culinary delights?

As I pointed out earlier, gone are the days of the hotel with a hotel restaurant. We specifically banished that old dusty idea and aimed at doing what the ex-hotel culinary industry was doing in the real world – except more and better. Our Gastronomic Quarter Downtown Budapest concept covers a wide range of diverse culinary explorables, such as the slow relishing of luxury food at The Living Room, contemporised Hungarian-Viennese specialities and seasonal menus at ÉS Bisztró, quick speciality coffee and gourmet sandwiches at ÉS Deli, world-famous New Japanese at Nobu, and creative and classic cocktails at Blue Fox The Bar, which is, incidentally, listed as one of the best in a CNN compilation of must-try places. In summer, both Blue Fox and ÉS open their own terraces, physically demonstrating that we are part of the fabric of the city.

What do you hope guests will expect when they walk into the hotel, especially now after its renovation?

Attention, care and a sense of enchanting cosmopolitan aesthetics and immediate exposure to the local culture. I want our customers to feel good about the hotel and remember us.

What do you think will leave the biggest impression on guests who visit the hotel?

Sense of distinction and precision of service that over delivers on their expectations.

Head over to Kempinski Hotel Corvinus Budapest’s website to find out more about the hotel.