Nicolas Buisson is no ordinary food photographer.His background is in architecture, jewellery perfume – rather than the kitchen, its produce and tools – and he’s gained an outstanding reputation producing portraits and editorial forVogue,VanityFairandRollingStonemagazine, among others. Moreover, he happens to have chance encounters with world renowned fashion photographers, such as Herb Ritts, in swanky San Francisco locations. Not altogether that ordinary indeed.

But in a recent interview, the dapper Parisian told FOUR about his lifetime love of cooking, which brought him into the realm of food photography, and the inner workings of his life behind the lens.

My parents divorced when I was seven and I started to cook for myself from the age of 12. I like to experiment with food and since a young age I have always made dinners at home for friends. I never stop learning about food. I must know ten different ways to cook a lobster!” Says Nicolas.

Nicolas was a teenager when he became enthralled with photography following a chance encounter over brunch in San Francisco with Herb Ritts, a leading fashion photographer of his day.

“I was 15-years-old and my father sent me to San Francisco for the summer to learn English. I was hanging out with a guy who was a bit older than me and one day we had brunch at his friend’s house in Russian Hill—it was Herbert Ritts’s home. I was just so astonished and mesmerised by him when I met him, I just wanted to be a photographer from then on.”

Herb Ritts launched his career in the 1970s gaining an outstanding reputation producing portraits and editorial forVogue,Vanity FairandRolling Stonemagazine, among others, not to mention campaigns for big name designers, too. Ritts’s fondness of clean lines and strong architectural form has played a big influence on Nicolas’s own style, which he describes as “a combination of architecture, light and still life.”

After meeting Ritts, Nicolas began exploring with his first camera. “I shot portraits of people, cats, anything really, and little by little, I started to take more pictures—some good, some bad.

“When I returned to Paris, a father of a friend, who was also keen on photography, taught me how to do old black and white prints in his bathroom and I was really starting to get into it. After my graduation he pushed me to go to photographic school.”

Nicolas credits his family’s encouragement for allowing him to follow his dream of becoming a photographer. “My parents let me realise my dream. It was the best gift I’ve ever received.”

Nicolas’s work involves editorial and advertising campaigns, food and interior projects; his clients include some of the most prestigious lifestyle brands in the world.

“I have done a lot of advertising campaigns for clients and shot a lot of watches, jewellery and perfume. But I would really like to work with more chefs.”

Nicolas frequently works with one of France’s top chef’s, Yannick Alléno. “We are good friends. Yannick knows he can rely on me and I know what he likes.

“When I first met Yannick in 2006, I realised I had no food photography in my portfolio. After that first meeting, we shot some food photography together for a book,The Alpines Tapas, which we shot in Cheval Blanc, Courchevel. This is how I got started in food.

Like with any relationship or work of art, Yannick and Nicolas’s relationship was a work in progress. He explains: “At the beginning we had to shoot things a few times to understand each other. You have to have a balance between what is good to eat, what is beautiful and what is real. Yannick gives me the freedom to shoot and he trusts me.

“Michel Bras in France would also be amazing to work with and I’d love to go for dinner at Noma and work with René Redzepi and take a cooking lesson in Japan.

“Japan is like another planet altogether. Every second you spend in Japan something new can inspire you.”

Responsible for shooting FOUR International’s winter edition cover of the dressed table, featured below, Nicolas worked with stylist Daphné Delamare, who has been responsible for styling big brand campaigns for brands in France.

The image demonstrates the other side of haute cuisine—the importance of the details; the silverware; glassware and how a table is dressed. “The way a table is dressed is so important and that’s what this image is all about.”

This weekend, FOUR sampled the French entry to Bocuse d’Or and got to meet chef Nicolas Davouze in his own kitchen at the Chateau Saint-Martin & Spa. 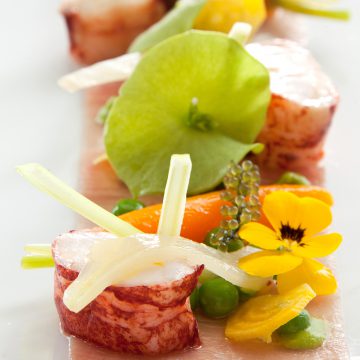 A Recipe by Nicolas Magie

Head chef at Le Saint James is taking Spring by its gastronomic delights and gives you a carpaccio of veal, lobster and sea currants.