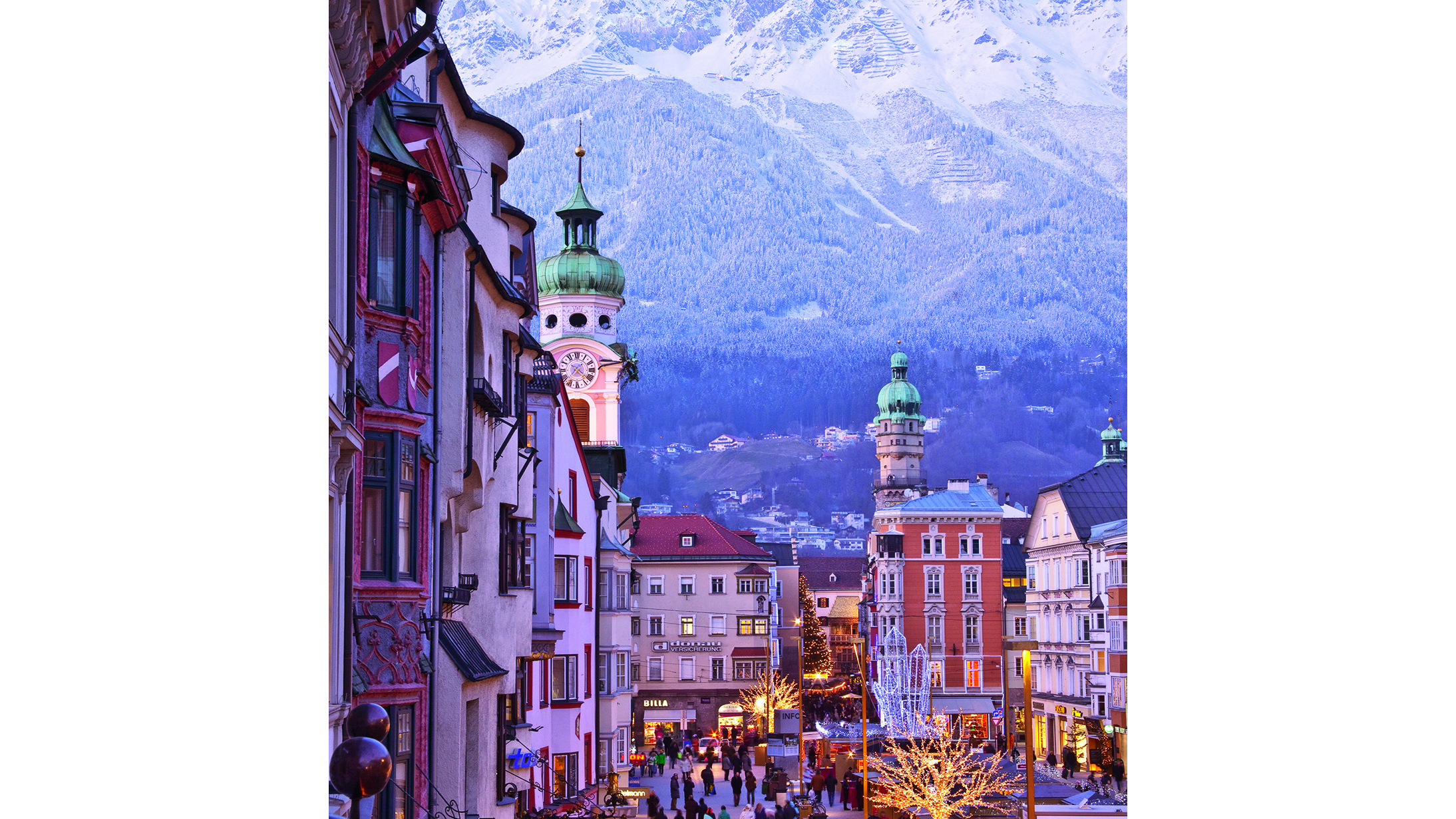 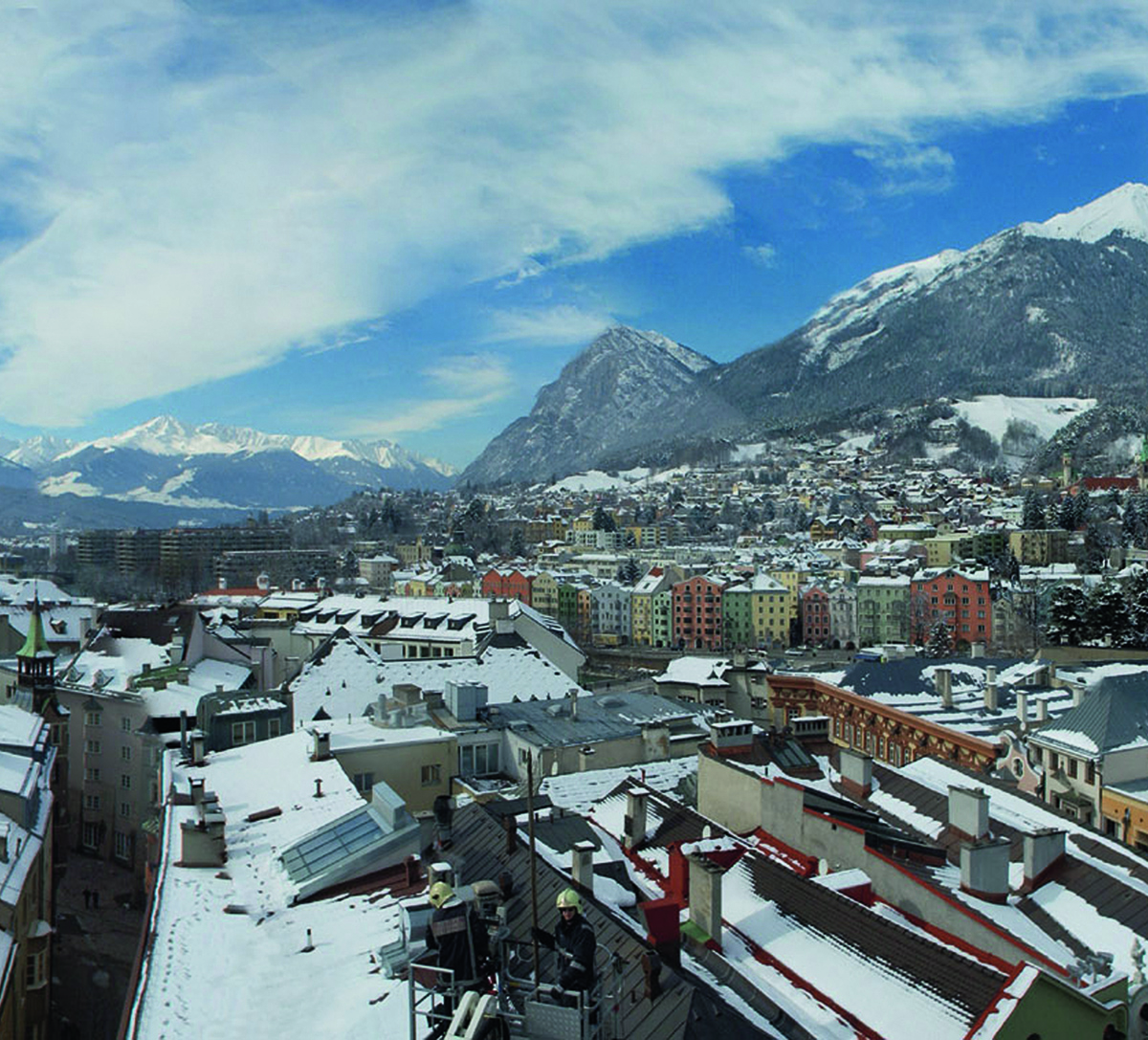 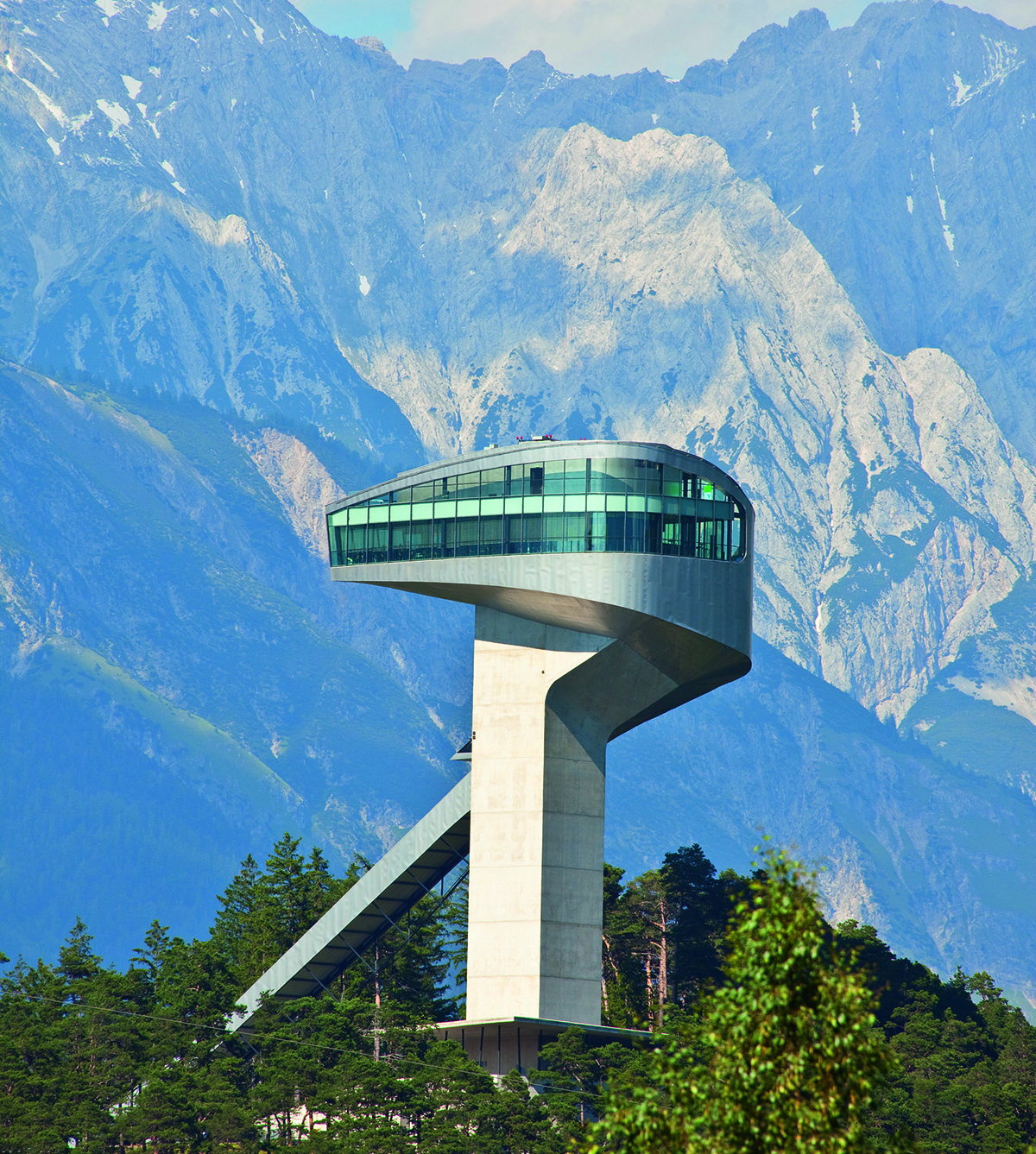 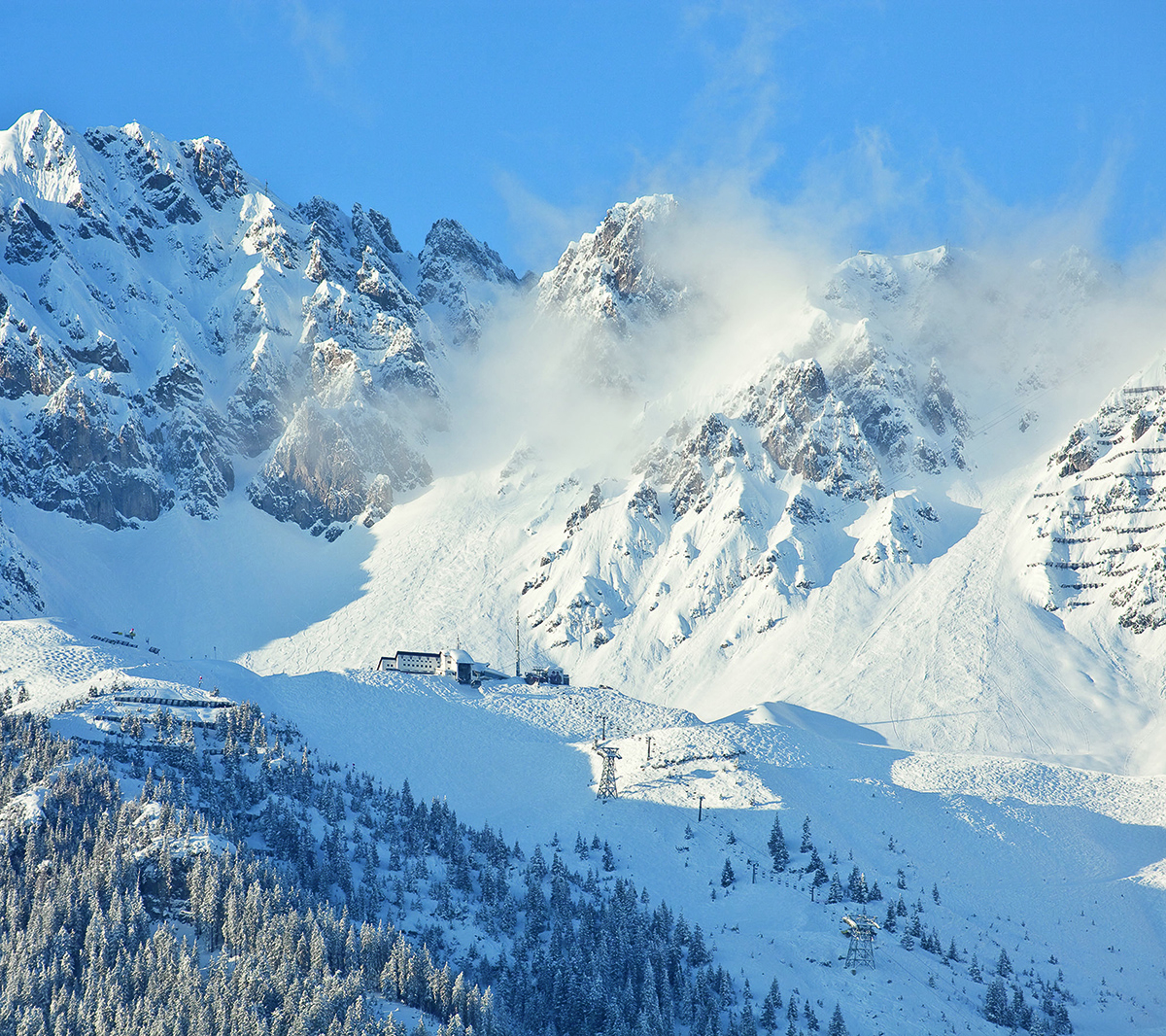 From thrilling slopes to top restaurants and nightlife, FOUR discovers that Innsbruck proves it has it all…

Imperial palaces or cutting edge urban architecture? Skiing or cultural pleasures? Innsbruck, Austria has the best of both worlds: the city and the mountains. Imagine relaxing in one of Innsbruck’s many street cafés surrounded by the magnificent medieval buildings of the Old Town – and less than 30 minutes away you get to soak up panoramic views on a restaurant terrace at an altitude of 2,000 metres, marvelling at the sparkle of the snowfields, while the croaks of the jackdaws compete with the echo from the city’s bell towers in the distance.

This union of culture and nature is visible all around, even in the middle of the historic city centre with its elaborate buildings, museums and churches. The view down the splendid Maria-Theresien-Strasse towards the medieval Old Town is crowned by the majestic Nordkette mountain chain; the baroque Triumphal Arch is set off by the Bergisel ski jump, Innsbruck’s spectacular new icon designed by architect Zaha Hadid.

Stroll through the city centre and you learn a lot about the town’s history. Habsburg Emperor Maximilian I (1459–1519), in particular, shaped the image of Innsbruck during its transition from medieval times to the Renaissance era. It was under Maximilian’s reign that Innsbruck’s glittering landmark – the Golden Roof – was constructed, as well as the former arsenal complex, which today houses the Zeughaus museum.

For his elaborately decorated tomb, Maximilian planned an array of life-size bronze figures, designed by prominent artists of his time. The 28 “Schwarze Mander” (black men), representing Maximilian’s ancestors and descendants, were worked on by the painter Albrecht Dürer. The statues remained incomplete until Maximilian’s grandson Ferdinand I took over and had this significant piece of Renaissance art displayed in Innsbruck’s Hofkirche church.

Until around 1600, a large number of houses were built in Innsbruck’s old town – often four or five storeys high and packed closely together. Looking across the Inn River –which incidentally gave the city its name: “bruck” is developed out of the German word for “bridge” – you get a pretty good idea about the background of medieval architecture. If you want to see it all from higher ground, climb the Stadtturm, Innsbruck’s gothic city tower. Completed in 1450 as part of the former town hall, it rises 51 metres above the old town. Formerly used by watchmen on the lookout for enemies or fires, it now offers fabulous views of the entire historical city centre and beyond.

It was Archduke Ferdinand II (1529-1595) who proved to be a significant patron of the arts by converting Ambras Castle into a splendid Renaissance residence. Located on a hill to the south of Innsbruck, Schloss Ambras is still home to extensive collections of art and antiques, which among Europe’s most beautiful curiosity chambers.

As a much-lauded result of the reconstruction of the Nordkette cable railways, the new funicular commences its journey in the very heart of the city. Another of Zaha Hadid’s creations, the unique stations and the cable-stayed bridge across the river Inn set new standards in international architecture. The mountains have never been so close – you can travel from the city centre of Innsbruck to high alpine terrain in only 20 minutes. Seegrube and Hafelekar alike are perfect starting points for many leisurely hikes or ski trips.

Après-ski entertainment options are varied, from a relaxing stroll along the recently redesigned Maria-Theresien-Strasse, or perhaps enjoying an aperitif in one of the many charming local pubs, before moving on to the culinary delights of Innsbruck’s dining scene, with treats as tender Tyrolean mountain lamb as well as internationally inspired dishes created by the numerous award-winning chefs in town.

When it comes to shopping, the most special shop is the Swarovski store, one of the largest in the world. Swarovski is a trademark that has been present for many years in the capital of the Alps, with the company seat as well as the glittering Swarovski Crystal Worlds, just 12km away in the town of Wattens. Following extensive renovation works, a luminous shopping landscape reopened in the summer of 2011, offering a crystalline experience in the very heart of Innsbruck. At the ‘Crystal Matrix’ – Swarovski Innsbruck’s fascinating ‘Chamber of Wonders’ – visitors are invited to immerse into a mystical, transcendental world of sound and crystal.

The Innsbruck ‘Christkindl’ markets are located all over the city, including three markets situated in the centre and two others a short distance outside. The historic city market runs from November 15 to December 23, with 70 different stalls selling handcrafts, Christmas tree decorations and food and drink. At the Hungerburg Christmas market guests can enjoy panoramic city views, although it only opens on weekends.

On the occasion of the 2005 IIHF Ice Hockey World Championships, the main ice arena was extended and a smaller venue added. Known as Olympiaworld, this facility regularly features professional sports events as well as cultural performances, and its ice rinks are open to the public.

With this state-of-the-art facility, together with the Igls bobsleigh run (refurbished in 2005-2007), the Bergisel ski jump (rebuilt in 2001) and the Nordkette and Patscherkofel ski resorts, Innsbruck has firmly established itself as an international sports destination and capital of the Alps.

A total of 90 lifts and cable cars whisk skiers up to the lofty heights surrounding Innsbruck, and with the help of snowmaking equipment the fun on the slopes is guaranteed to last until late into spring. The skiing slopes comprise of almost 280km of pistes, accessible on just one ski pass. Only the sky seems to be the limit when you hit the slopes of Kühtai, Austria’s highest ski resort at more than 2,000 metres above sea level. You can add another 1,000 metres in altitude at the nearby Stubai Glacier. The Nitro Skylinepark, Innsbruck’s most ‘vertical’ park located above the town, is a challenging location for snowboarders, alpine skiers and sun seekers can take advantage of the new Nordkettenbahn cable car to join the exciting winter fun at Seegrube with fabulous panoramic vistas. If you prefer relaxed, wide turn skiing you will find the family slopes of Mutterer Alm, Rangger Köpfl or Schlick 2000 ideal. With the Olympia SkiWorld Innsbruck Skipass you hold the key to nine top class ski areas, with the added bonus of a free ski bus service – a wonderfully convenient way to reach the slopes of your choice in comfort.

Off the slopes and Innsbruck’s culinary trail is diverse. One of the most attractive and exceptional gastronomic venues is Alfred Miller’s Schöneck, a picturesque restaurant with an enchanting garden and great views, near the Innsbruck Weiherburg castle. Awarded 15 points (two toques) by Gault Millau and 78 points from Austria’s A La Carte gourmet magazine (as well as a star in the 2009 Michelin guide), Schöneck has been one of Innsbruck’s leading restaurants for many years now. The small, exquisite selection of dishes – you can choose from two set menus – is outstanding, representing a harmonious blend of local and international cuisine.

On par with Schöneck is Europa Stüberl, located within the five-star Grand Hotel Europa – one of Innsbruck’s leading hotels. Part of the Italian Palenca Luxury Hotels since July 2007, its first-class hospitality is matched by its fine cuisine, which earned the Europastüberl two toques (15 points) in the 2012 edition of the Gault Millau as well as 3 stars and 78 points from the A La Carte guide 2012. Chef de cuisine Roland Geisberger and his team have achieved these prestigious awards with their seasonal international cuisine, a selection of Austrian culinary classics – such as ‘the real’ Wiener schnitzel made from veal, accompanied by potato salad and ‘Vogerlsalat’ (lamb’s lettuce) – as well as a range of daringly inventive creations.

The culinary approach practiced at Chez Nico – a small restaurant located in a passageway between Maria-Theresien-Strasse and Landhausplatz Square – may seem a little more unusual. Its dishes are brimming with flavour and creativity has earned it two stars and 65 points in the 2012 edition of the A La Carte culinary guide. Since French chef Nicolas Curtil has recently turned vegan, the menu is now featuring both vegan and vegetarian delicacies from his homeland, which manages to capture the attention of even most diehard carnivores.

Gault Millau also features several other fine restaurants in its latest edition: The Sitzwohl, Lichtblick, on the top floor of the stylish Rathausgalerien mall, is one of Innsbruck’s most spectacular spots; Schindler – scoring with stylish interior design and unique views of Maria-Theresien-Strasse; Trattoria da Peppino – serving award-winning dishes with an international twist, widely renowned for its superb Italian specialties, and – for the first time in 2012 – Innsbruck’s Café Sacher proudly carries 1 toque and 14 points.

Head for cocktails or a nightcap before resting your head at the Grand Hotel Europa; the hotel’s Europa Bar offers a cocktail hour every evening from 5pm.

Check into the Europa Suite for optimum luxury and comfort, surrounded by 300-year-old wood panelled walls made from East Tyrolean farmhouses, a relaxing fireplace and plenty of space. Rooms start from 152EURpp.

The central location of the hotel makes it an ideal starting point for discovering the unique Tyrolean mountain world and culture that Innsbruck has to offer.

If your dreaming of summer nights in the Med, then you need to try this dish from masterchef, Pierre Gagnaire, to transport you to Provence…