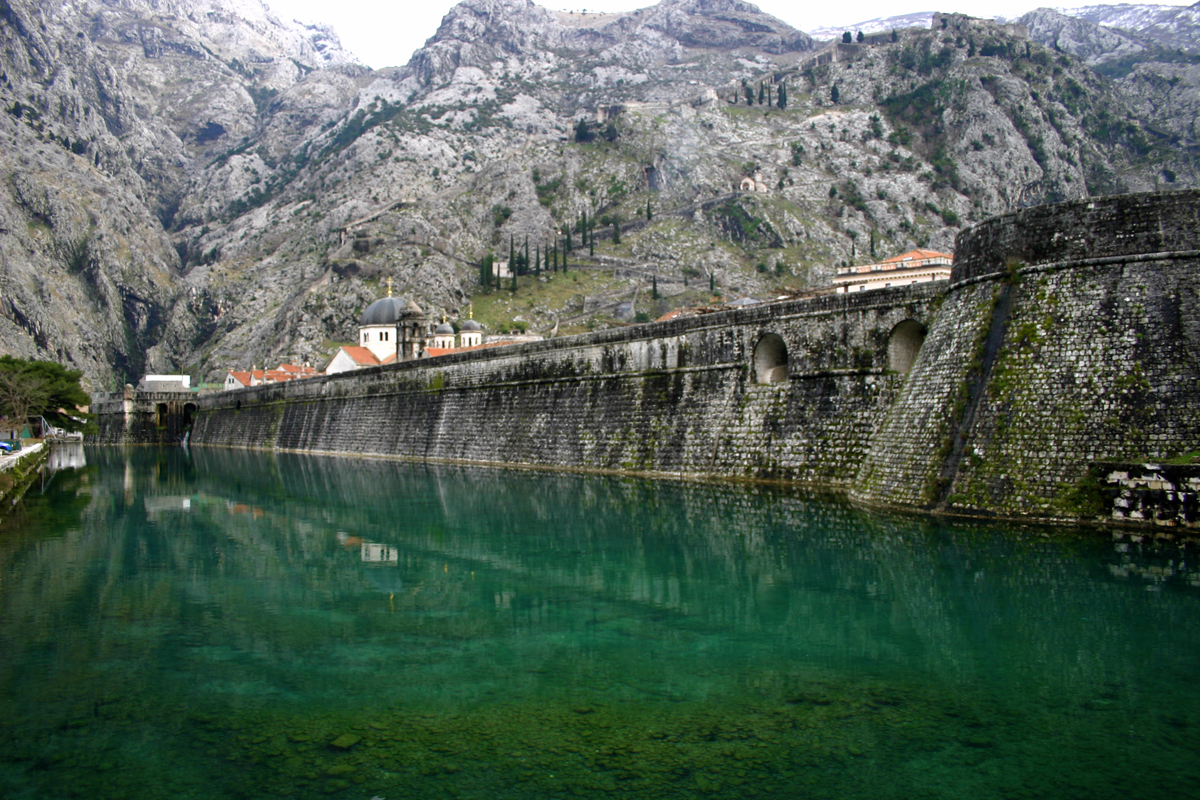 Steeped in UNESCO World Heritage Sites, dotted with picturesque villages and blessed with a coastline of white sandy beaches and turquoise waters, it’s easy to see why Jane Foster decided to call the Adriatic Coast home…

A tiny Balkan country, lying directly south of Croatia and giving onto the deep blue Adriatic Sea, Montenegro (meaning ‘black mountain’) is named after the dramatic highlands of its interior. However, most visitors come here to explore its glorious coastline, dotted with peaceful medieval-walled port towns and sun-drenched sand-and-pebble beaches. My first visit was back in 2001.

Arriving by public transport from Croatia we had to change buses at the border and walk over a narrow strip of no man’s land. But since then, relations between Croatia and Montenegro have greatly improved, and many visitors fly into Dubrovnik, hire a car and drive south. Once over the border, visitors follow the coastal road, which curves around the 18-mile long Bay of Kotor, Europe’s southernmost fjord, tracing the seaboard to afford ever-changing views over the water. It looks very much like Dalmatia, but while Croatia is all about sea and islands, Montenegro is a land of sea and mountains.

Driving around the Bay of Kotor, passing through the village of Morinj, you’ll spot two neighbouring islets, each crowned by a church, rising from the glistening sea. It’s an enchanting spectacle and well worth a stop for photos. One islet, St George, hosts a Benedictine monastery and a 17th-century church, hidden behind towering cypresses, while the other, Our Lady of the Rocks, is manmade and home to a 15th-century church of the same name. Continue driving to Perast, a peaceful car-free village made up of Baroque stone villas set in lush gardens, built by local sea captains when this diminutive settlement had some 100 merchant ships. From here, take a boat to visit Our Lady of the Rocks, housing a miraculous 15th-century icon depicting the Virgin, as well as a shrine hung with silver votives offered by local sailors as a way of thanks to the Virgin for protecting them upon the high seas.

Between Perast and Dobrota, in the village of Ljuta, Stari Mlini is one of the country’s loveliest restaurants. Occupying an 18th-century flourmill, it is built over the River Ljuta, with wooden tables on a stone terrace surrounded by palms and fig trees. It’s popular with yachters who moor up their boats on the quay out front while they feast on excellent—but rather pricey—fresh seafood. House specialities include crni rižot, a black risotto made of cuttlefish ink, and barbecued brancin (sea bass).

Heading south, the coastal road gradually becomes more dramatic, as plummeting mountains rise to the left, with glorious sea views to the right. In the village of Dobrota, Palazzo Radomiri is an 18th-century Baroque villa that has been converted into a welcoming 10-room boutique hotel. It centres on a courtyard garden with an outdoor pool and a stone terrace overlooking the bay, where complimentary yoga and pilates is offered on sunny mornings. Ideal for couples and families alike (there’s baby-sitting on request), you can swim off the quay before indulging in a delicious homemade breakfast. They also have sea kayaks for hire, for the more adventurous.

A couple of miles beyond Dobrota, nestled at the end of the Bay of Kotor, is one of Montenegro’s loveliest destinations, Kotor. Backed by soaring limestone mountains and built right up to the water’s edge, the old town lies within three miles of medieval fortifications. Within the walls, winding cobbled streets and splendid paved piazzas host open-air cafés and restaurants. The entire complex has been proclaimed a UNESCO World Heritage site. It’s much loved by wealthy Brits, who have bought up a number of old stone houses here. Under Byzantium, Kotor was renowned for its skilled stonemasons, goldsmiths and icon painters—evidence of their work includes the lovely Romanesque cathedral from 1166 on the main square. The Venetians added the aristocratic Renaissance and Baroque palazzi, several of which are now stylish boutique hotels. I especially like the seven-room Hotel Hippocampus, combining existing 17th-century stonework and wooden beamed ceilings with contemporary details such as glass-walled bathrooms and large bold-coloured oil paintings.

Continue four miles to Tivat, driving through the Vrmac tunnel to avoid the long twisty coastal road, to see Porto Montenegro, a swish 630-berth marina opened in 2011, designed by British architects to accommodate super-yachts and their (super-rich) owners. It’s incredibly sophisticated and everything is done very professionally—they even flew in dolphins from the US to scour the seabed for possible mines left over from WWII.

And while Montenegro is not a great shopping destination, here you’ll find several boutiques, such as the CYΠEPMAPKET concept store, stocking funky clothing and accessories created by young up-and-coming Serbian and Montenegrin designers. You can also charter a yacht for a private one-day sailing trip around the Bay of Kotor or reserve a cabana and chill by the 64-metre infinity pool at Puro Beach.

But when it comes to bathing, I prefer Almara, 14 miles south of Tivat, on the road to Budva, where the motto ‘hedonism in wild nature’ says it all. Here a sand and pebble beach lined with wooden sun beds and big white parasols gives onto turquoise sea, backed by a wooden deck with a bar-cum-restaurant serving creative Mediterranean cuisine. Almara also stages occasional concerts: the British electronic band, Stereo MC’s, played here in summer 2012.

Arriving in Budva, 11 miles south of Almara, we have reached Montenegro’s top seaside destination. Like Kotor, the compact Old Town is contained within sturdy Venetian-era fortifications, but its history goes all the way back to the 4th century BC, when it was founded by the Greeks. Today, a warren of cobbled streets conceals seafood restaurants, pizzerias, cocktail bars and gift shops. It’s my favourite town in Montenegro, as it looks onto the open sea, whereas Kotor, located at the end of a long narrow bay, is undeniably lovely but a little claustrophobic. Budva is tremendously popular with rich Russians and there’s a lot of Russian investment here. Stay at the friendly 12-room Hotel Astoria in the Old Town—the ground floor café extends outside the medieval walls, onto the beach, where you can eat breakfast (served until 1pm) at a table close to the water’s edge.

For dinner, try the long-standing Konoba Stari Grad, noted for its delicious octopus stew served with polenta, plus occasional live guitar music, then round off with a nightcap at Casper, where you’ll find tables on a pine-scented terrace and mellow DJ music. I was here on the night Serbia won the Eurovision in May 2007—heartfelt celebrations, despite the fact that Montenegro had claimed independence from the Union of Serbia and Montenegro (what was left of Yugoslavia) just one year previously. For after-midnight partying, take a taxi to Top Hill, a massive open-air club on the hillside high above Budva—US house music DJ Roger Sanchez played here in summer 2012. Beyond Budva’s Old Town, the so-called Budva Riviera stretches 13 miles along the coast, with a string of large modern resort hotels, including Hotel Splendid in Becici. One of the few the 5-star hotels in Montenegro, the Splendid is popular with rich Serbs and Russians and has a superb spa; the Rolling Stones stayed here when they played a concert in Budva in 2007.

For most, the ultimate hideaway in Montenegro has to be Aman Sveti Stefan, five miles south of Budva. The complex centres on a fortified rocky islet, concealing a 15th-century fishing village, joined to the mainland by a causeway. It was first turned into a hotel in 1955 and welcomed illustrious guests such as Elizabeth Taylor and Richard Burton, who were friends with the President of Yugoslavia, Tito. In 2010, following extensive renovation, it reopened under Aman. The setting is truly stunning, combining medieval splendour and natural beauty, and typical of Aman’s understated luxury, the new look is low-key and discrete, but oozing with refined good taste. The 50 rooms, cottages and suites have all been beautifully restored, so you get exposed stonework, wooden beamed ceilings, handcrafted oak-wood furniture and fabrics in muted tones of cream and beige. The bathrooms have stone floors with under-floor heating, giant bathtubs, and soaps and creams provided in ceramic pots. Outside, lavender, rosemary, oleander and olive trees soften the centuries-old stone alleys. On the mainland, the complex encompasses three bays, each with a beach, plus the stately Villa Milocer, which was built in the 1930s as the summer residence of Queen Marija Karadordevic, and has eight luxurious suites. Nearby, on a hill above the horseshoe-shaped Queen’s Beach, the Queen’s Chair restaurant (dinner only) is noted for its amazing sunsets and exquisite fresh fish, while also in the vicinity but carefully hidden by pinewoods; the new Aman Spa opens this summer.

Last but not least, a trip inland from the coast will give you a fuller picture of Montenegro’s varied landscapes.

From Budva, a short drive brings you to Crmnica, where the family-run Winery Mašanovic produces velvety red Vranac and offers private wine tasting sessions. Beyond Crmnica, Virpazar is the main departure point for exploring Lake Skadar National Park, famed for rare birds including pelicans, plus tasty carp which are served up at waterside eateries. Further inland still, the mountainous interior is home to the Tara Canyon, a prime venue for rafting, and the Durmitor and Biogradska Gora national parks, inhabited by lynxes, wolves and bears, sufficiently fulfilling the promise of the official motto of the National Tourism Organisation of Montenegro: ‘Wild Beauty’.