A tale of two cities

With its sleek hotels and heady rooftop bars, Beirut is the go-to Middle Eastern city for the urbane traveller. But the divide between its war-torn old town and glitzy rebuilt centre mean it’s a city caught between being a luxurious capital, and a turbulent Middle Eastern metropolis, as Dave Drummond reports for FOUR Magazine.

The distinction Beirut has between ground and roof level is as clear as the divide between its different areas – the historic old town; the glitzy central district; the bay. On the ground you’re likely to wander past walls riddled with bullet holes, politicised graffiti, police, army and tanks: the unsettled history of what still feels like a recent civil war (in reality it ended in 1990) lining the hot and humid streets.

Up on the roofs however, where the air thins out, Beirut is the picture of sophistication. At Le Gray, one of Beirut’s premier luxury hotels, there’s an impossibly picturesque infinity swimming pool alongside numerous bars and restaurants, while at the Moëvenpick Hotel, with its own private beach, you have the 24-hour Hemingway bar, offering nibbles and an impressive wine and cigar list. But arguably they’re all in the shadow of the jewel in Beirut’s rooftop crown; Sky Bar.

The trouble is, it’s not all that easy to get into – the result of doormen and women so stereotypically vain and shallow, your best chance of entering is by taping a mirror to your face. It’s not worth explaining how I got in, but I did, and up the coveted elevator and down a corridor I’m witness to the spectacle that is at first a sort of explosion of colour, light, noise and people. Twenty-foot LED walls play visualisation loops, fire billows into the air, dancers climb atop tables dressed in skimpy cabaret dress, while impossibly chic punters swig from vodka and champagne bottles the size of small children. There’s no dedicated dance floor in Sky Bar, but this isn’t necessarily somewhere you come to dance, it’s more a temple of fun extravagance. The open air and the sea breeze coming in from the Mediterranean give a surreal but sophisticated atmosphere to what in so many other countries would be sweaty and claustrophobic. Across the city, rooftop bars are everywhere, such as Capitol, another bar/club with a highly competitive door policy, sleek interiors and an air of ostensible affluence. It’s a more laid-back affair mind, and makes up for what it lacks in debauchery with understated style.

But, as you might imagine, one can’t live on rooftops indefinitely, and Beirut on street level is an entirely different city. When I first arrive I’m struck by the blistering heat of the mid-June summer and the absence of an expected sea breeze, the air sticking to me like Clingfilm. The drive from the airport passes countless buildings on their way to being constructed, all grey concrete shells without windows, but curiously with washing lines and satellite dishes. I assume they aren’t left abandoned from Lebanese fleeing war, but instead by contractors fleeing from economic meltdown.

My hotel however, is anything but half-formed. Le Gray is a sparkling beacon of glamour, located on the cusp between a redeveloped and a redeveloping city. At its front sits the old town, where decrepit but historic buildings are ridden with bullet holes, and there’s real character. It’s here that you can find the best pistachio ice cream, or rose water sorbet you might ever taste, but it’s hidden behind a sliding door with no sign, where a single man stands behind his chest freezer asking politely but abruptly “whatyouwant?” To the rear of Le Gray is the Central Beirut District, already in the latter stages of a heady facelift. Here the streets actually shimmer, having been pumped with cash in order to get them back to something resembling the city that was once known (albeit rather patronisingly) as the ‘Paris of the Middle East’ due to palpable French influences (though it gained independence from France in 1943); its beauty, and cosmopolitan reputation. But like any such public display of wealth, the renewed beauty does come with an air of insecurity, and so it’s not uncommon to see the streets heavily patrolled by not unfriendly, but slightly intimidating armed troops.

On the other side of the city however, there’s a contrasting atmosphere of modesty and resilience, in both the buildings – still standing and occupied despite continued battering – and the people, who despite having a penchant for talking at you rather than to you, are warm and inviting. On a mid afternoon walk I visit Mar Mitr Street and stop in at Boubouffe, a café offering Lebanese staples. The stand out here is the shawarma, cooked on a doner spit, using charcoal instead of gas to infuse a smoky flavour so often lost in modern cooking. The choice is simple – either beef or chicken – but both warrant savouring. Flavoured with something in the region of 20 spices (the exact recipe is carefully guarded), the meat is tender and fragrant, and like so much of Lebanese cooking, has a sour, acidic kick. It’s a pleasant astringent flavour which comes out in a number of their dishes, notably in anything using za’atar, the spice mix of wild thyme, toasted sesame seeds, sumac and salt, which appears in dishes across the country’s menu. Notably on manoush, a pizza-style flatbread normally baked in a wood-burning oven and slathered with either the mix or seasoned minced lamb, but also makes a surprisingly pleasant croissant filling.

Lala Chicken, only a matter of streets away, excels at the same simply prepared food. Its chicken sandwiches are also cooked on charcoal, and feature simple seasoning that highlights the smoke and poultry mix. Beirut has a thriving restaurant scene, and places such as the seaside brassierie Saint Elmo’s; the sophisticated seafood of Mandaloun Sur Mer; the Argentine meat fest of La Parilla; or even the Lebanese outposts of Gaucho and Momo, are deserved of any culinary tourist’s attention. As is the forthcoming opening La Petite Maison, the sister to the swish Mayfair restaurant, which opens in October in le Venodome Hotel – another of the city’s luxury digs – serving seasonal, laid-back gourmet dishes with Cote d’Azur inflections. But the real gems of the city’s dining options are those in the Boubouffe and Lala vein, where simplicity and tradition are held high. For a more refined, sit down experience which maintains these ideals, Seza’s, in Mar Mikhael, is an unassuming but stylish Armenian bistro serving excellent, simple food. Littered with soft fairy lights and rustic furniture the menu offers dishes such as manti, minced lamb and beef baked in dough and served in garlic yoghurt, to an almost entirely local dining room.

It’s the mix of the local traditions and the high-end glamour that make Beirut such an enticing city to visit. The comfort and luxury makes it ideal for the affluent tourist, but it’s just as easy to hail a taxi, barter your way down to a reasonable figure and pray for your life while you rattle down a highway with two lanes but four cars. It’s a city still finding its feet, and so it’s worth going now, while the people are still welcoming and eager to show off their country; while there’s still the resilient character of a post war nation, and while it’s known as Beirut, ‘Capital of Lebanon’, and not the ‘Riviera of the Middle East’. 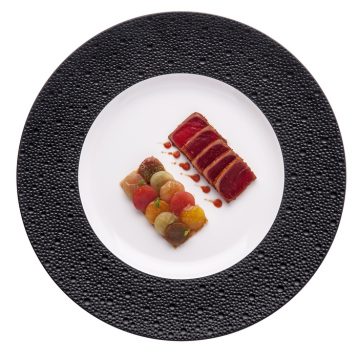 Try this sensational recipe from Youssef Akiki of restaurant Burgundy in Beirut, for bluefin tuna and a stunning seasonal tomato tart…Yum!

Combining Ancient Chinese cuisine and Arabian decor, Lee Kok Hua is currently at the helm of Hakkasan inAbu Dhabi. A master ofChinese and Cantonese cuisine, he came to Abu Dhabi havingpreviously been at Hakkasan Hanway Place where he worked under Head Chef Tong Chee Hwee for five years.Signature Hakkasan dishes like Peking Duck with Caviar