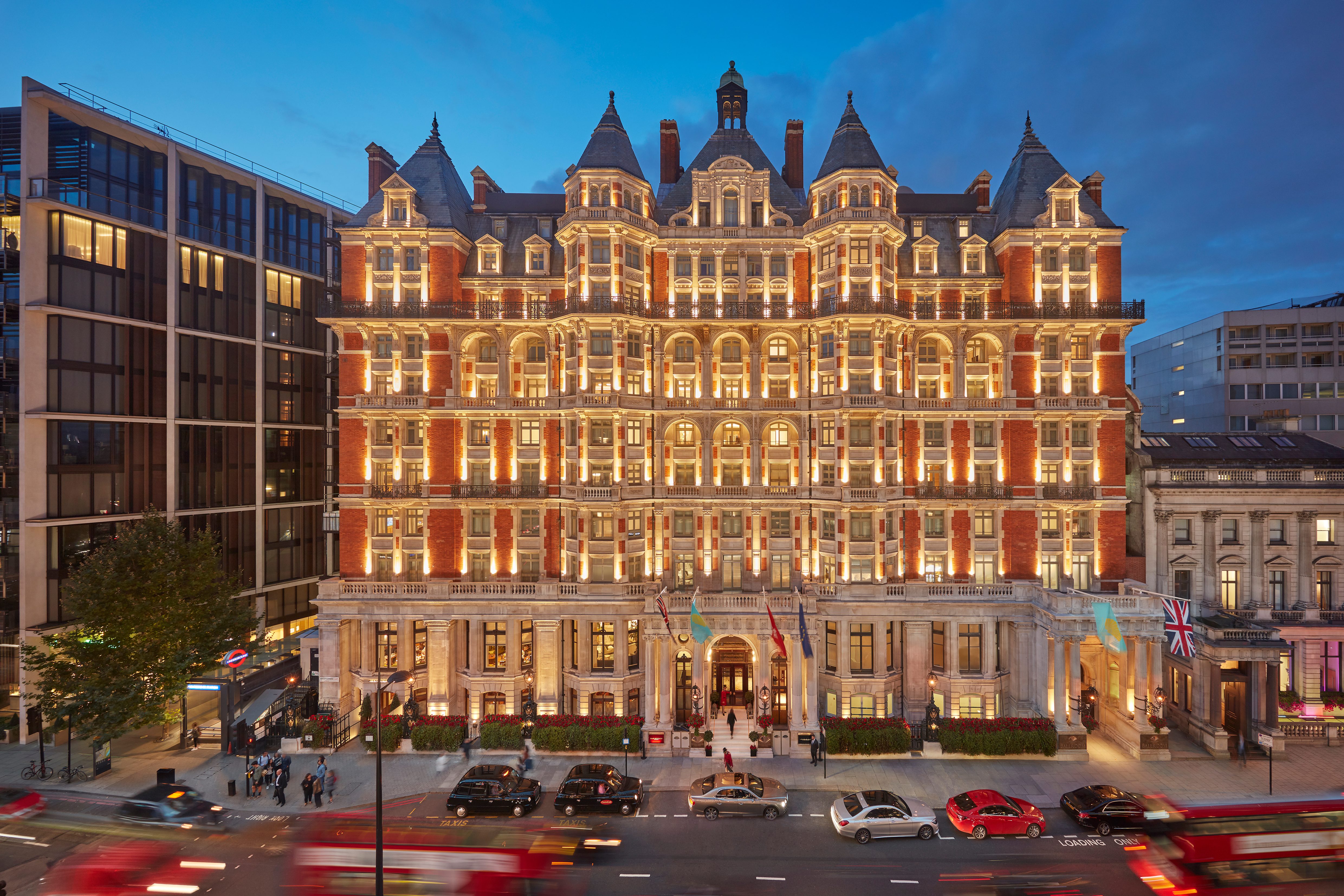 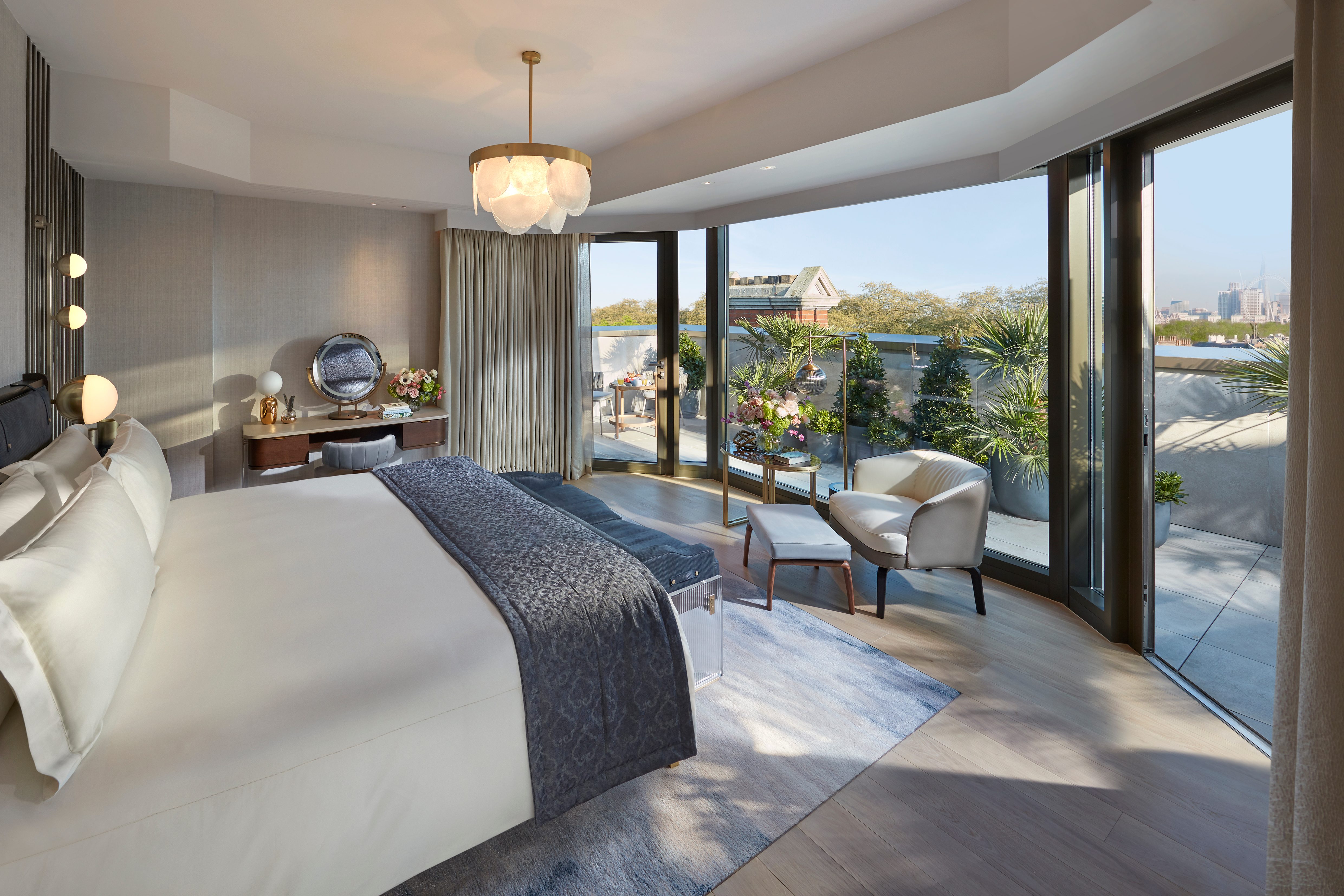 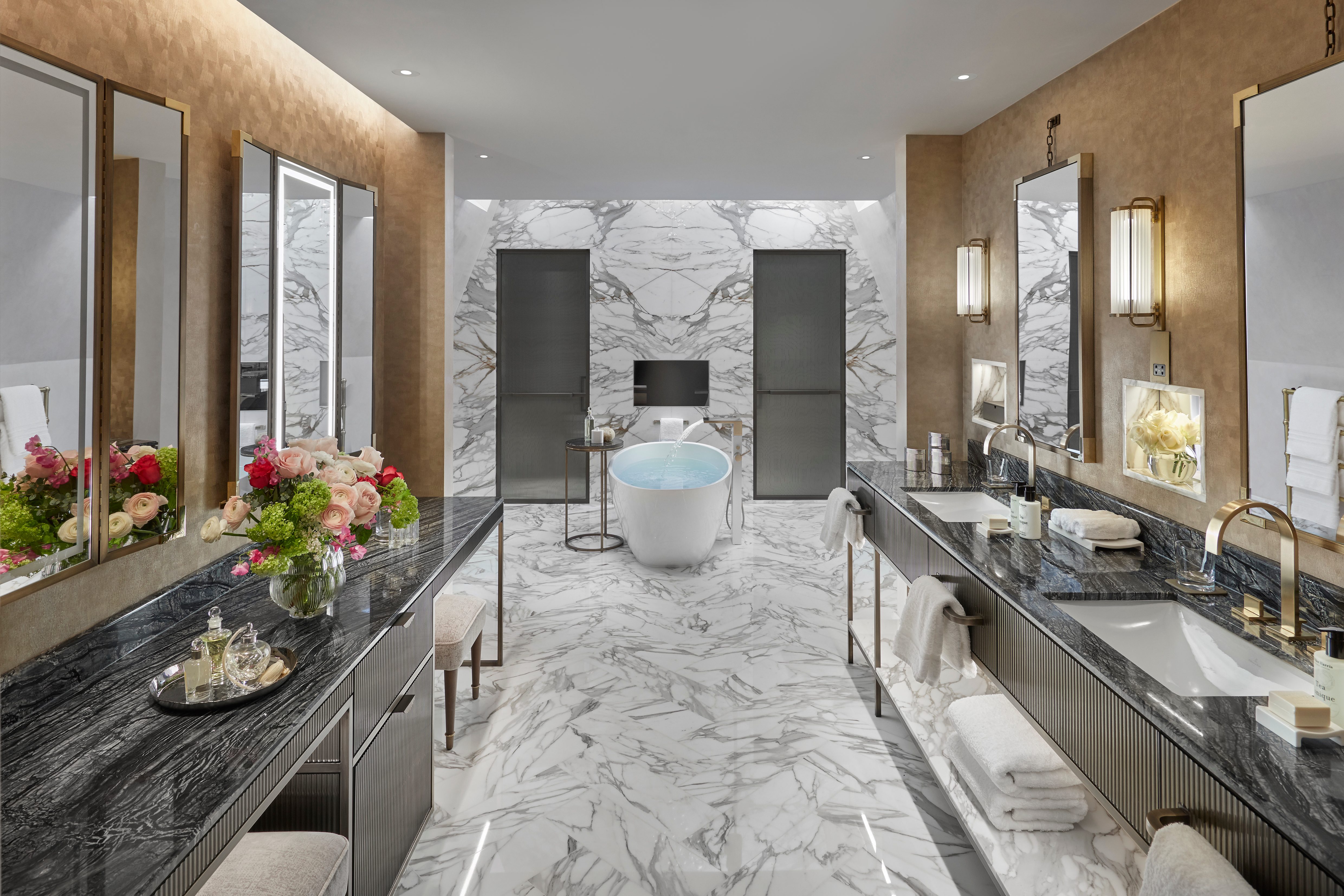 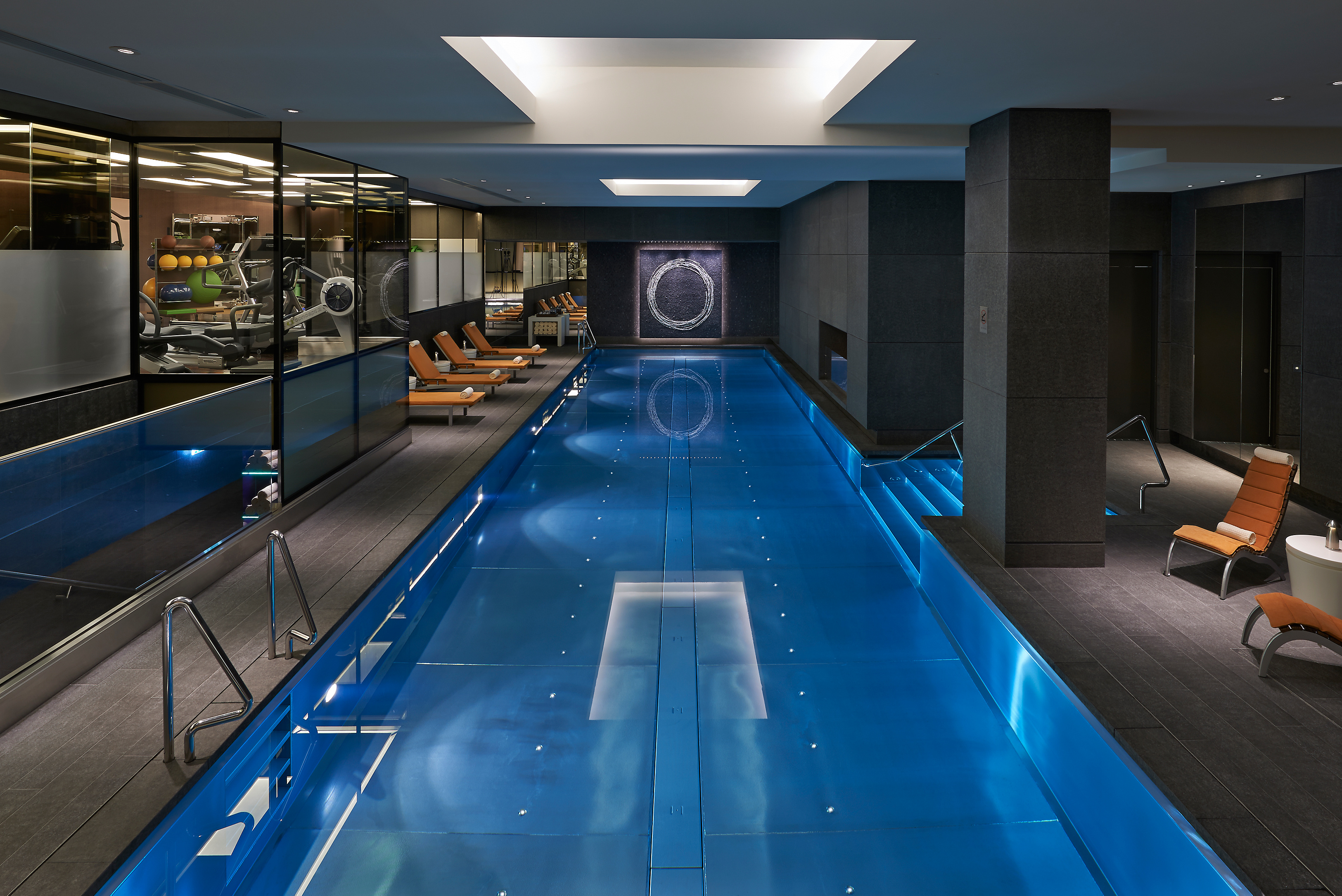 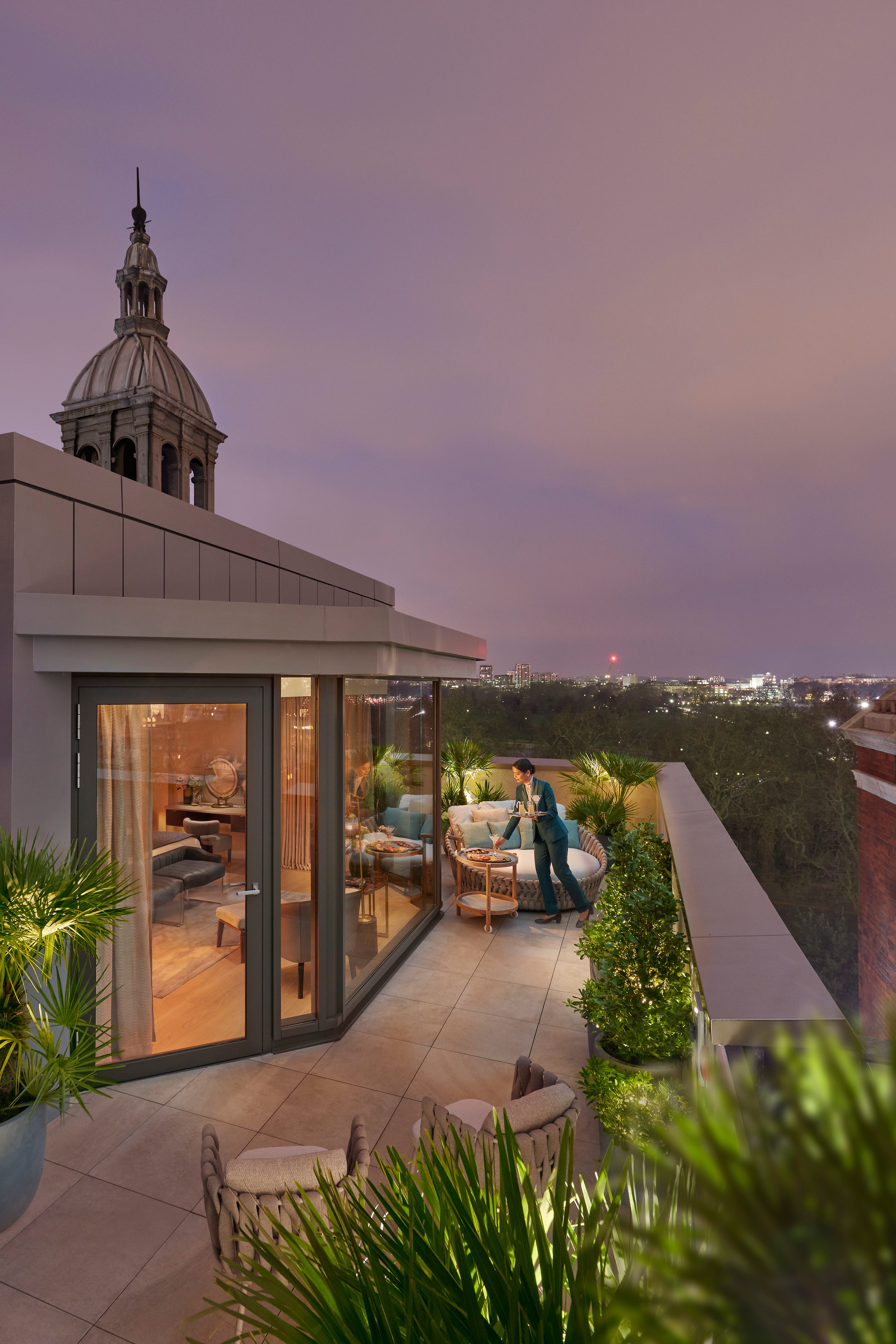 Earlier this year, Mandarin Oriental London reopened its doors following the most extensive renovation in its 117-year history. FOUR takes a look inside…

The hotel, which offers 181 accommodation options, has been completely re-imagined. The public spaces along with each room and suite, including the two newly created expansive penthouse suites, now boast a sleek and sophisticated edge. Most accommodation, in addition to its sumptuous design, also offers exceptional views of leafy Hyde Park and the London skyline.

Amanda Hyndman, General Manager and Area Vice President of Operations commented, “Mandarin Oriental is enormously proud of the heritage of this historic hotel. The scope and intricate detail of this momentous renovation is designed to ensure this iconic London establishment is recognised as one of the finest hotels in the world. We look forward to welcoming our guests with kind and intuitive service that is truly British but reflective of our Oriental heritage.”

Internationally renowned designer, Joyce Wang, was the mastermind behind the redesigning of all guest rooms and suites, along with the creation of the hotel’s new Penthouses. The room and suites take inspiration from the peaceful parkside location, as well as the glamour of the early 20th century’s Golden Age of travel. Now more luxurious and comfortable than ever before, the rooms and suites are filled with art deco-inspired features including carefully curated artworks and custom-designed furniture.

Each of the hotel’s 40 suites ranges in size from the smallest, at 47 square metres, located within the turrets of the hotel, to the largest, at 444 square metres, which comprises the new three-bedroom Mandarin Oriental Penthouse with private terraces. Consisting of two penthouse suites, the Mandarin Penthouse and the Oriental Penthouse can be interconnected to create one of London’s largest suites with three bedrooms, three bathrooms, a private dining room, two kitchens, and expansive views of Hyde Park and the London skyline.

In every suite, guests will find a host of special additions ranging from libraries curated by the well-known historic London bookseller, Heywood Hill, to yoga mats for private practice. All accommodation comes equipped with GHD hair straighteners, Nespresso coffee makers, his and her Miller Harris bathroom amenities and Jo Hansford hair products.

New York designer Adam D. Tihany, has overseen the redesign of the next-generation Spa at Mandarin Oriental, London. In keeping with the fresh new look, the extensive spa menu has also been enhanced to include exclusive partnerships with some of the most sought-after health and wellness experts in the world.

The new spa features 13 individual treatment rooms, an Oriental Suite with two massage beds and a Rasul water temple, a room designed for traditional ASANTE Chinese Medicine consultations and treatments and a Bastien Gonzalez Pedi:Mani:Cure Studio – the first of its kind in the UK.

The Restaurants and Bar

Adam D. Tihany has also overseen a light refurbishment of Dinner by Heston Blumenthal, Bar Boulud, London and Mandarin Bar. The Rosebery, known as the Bennett Tearoom in the 1920s, offers a special 1920s Afternoon Tea, while Mandarin Bar creates a series of special cocktails named after celebrated guests and iconic events that took place within the hotel.

Having hosted royal parties and glamorous events since the 1900s, the hotel’s Ballroom and Loggia have also been lovingly restored to include 24-carat gilding of many original features.  Both venues enjoy access from the park via the private Royal entrance. The renovation also includes a beautiful hand-painted Butterfly Terrace by artist Leah Wood, along with two new versatile meeting spaces, Asquith and Balfour, for private meetings and social soirees.

The first phase of the renovation was unveiled in September 2017.  Joyce Wang was commissioned to transform the Lobby Lounge and Reception area, which now blend seamlessly with The Rosebery’s nature-inspired décor. Contemporary materials, including acrylic, are juxtaposed with more traditional finishes such as blond burl wood. Centerpiece commissioned glass chandeliers enhance the dramatic entrance. The reception artwork by Fredrikson Stallard, is an abstraction of the textured and layered bark of the Plane Tree – the signature tree of Hyde Park.

The hotel has commissioned VISTO Images to compile an outstanding art portfolio throughout the hotel.  Each of the hotel’s new floor landings showcase a striking photograph by Mary McCartney, who is the official photographer of the Group’s international advertising campaign, while the corridors are home to pieces inspired by the nature of Hyde Park and English technological innovations featured in the 1851 Great Exhibition.  Other eclectic art pieces can be found throughout the hotel’s public areas.

If walls could talk this iconic hotel would have many stories to tell. The building was commissioned in the late 1880’s however construction was initially delayed due to fears that its height would cast a shadow over the Serpentine. It finally opened in 1889 as an exclusive block of apartments for affluent bachelors, before opening as a hotel, with its own private Royal Entrance, in 1902.  Since then, many honoured guests have passed through the hotel, and for several years after the Second World War it was the headquarters of the SAS.

Glamorous parties and dance classes by the venerable Madame Vacani – who taught HM Queen Elizabeth II and Princess Margaret to dance – have been held in the ballroom.  Sir Winston Churchill lived in the hotel for a while and was known to offer room service waiters two cigars in return for the delivery of an early breakfast. Evelyn Waugh was also a regular guest, and characterised some of his fellow guests after his many stays.  Many of these momentous past events can be viewed in more detail in the newly created Historical Journey Exhibition on permanent display in the hotel from Monday 15 April 2019.