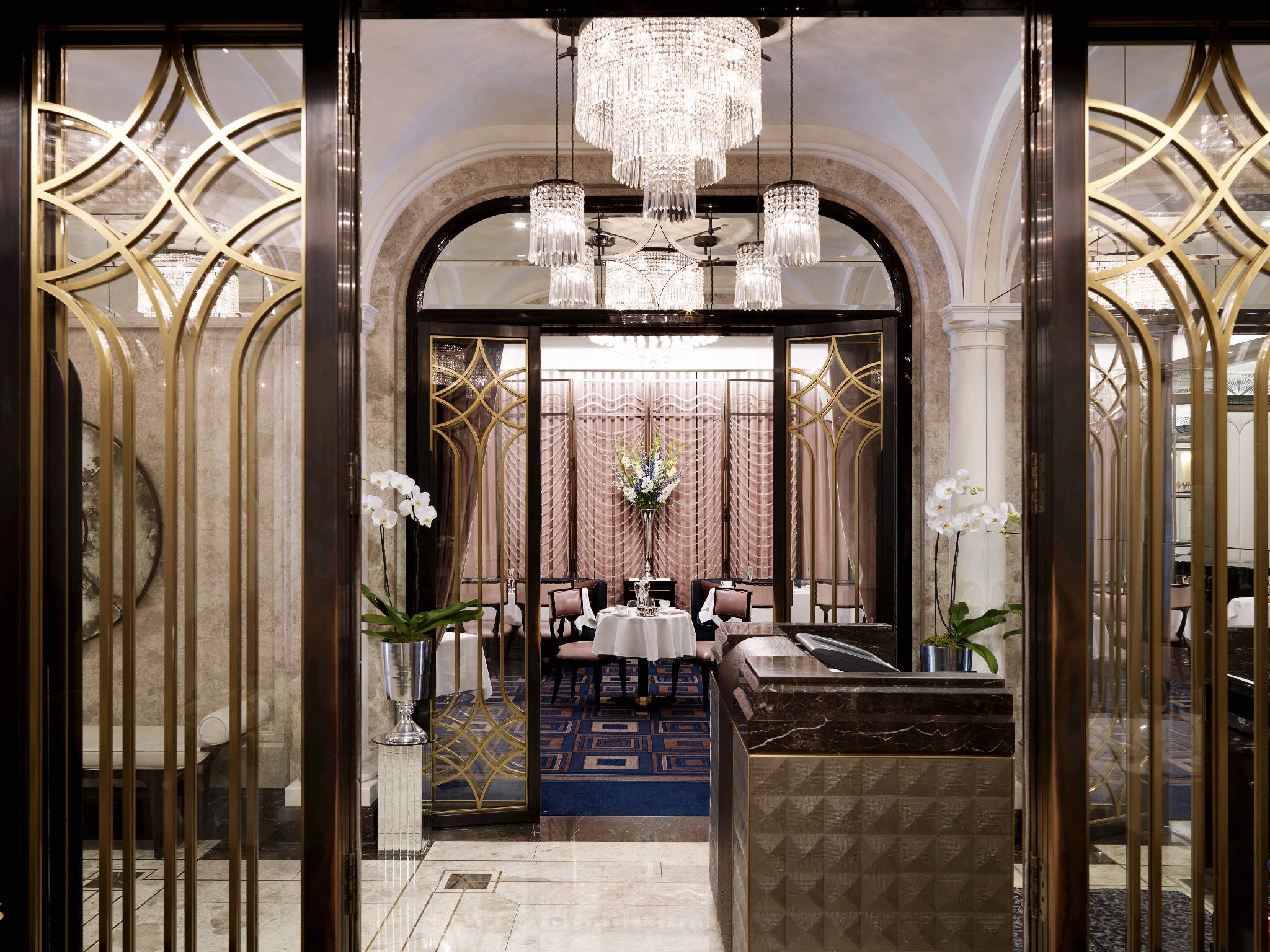 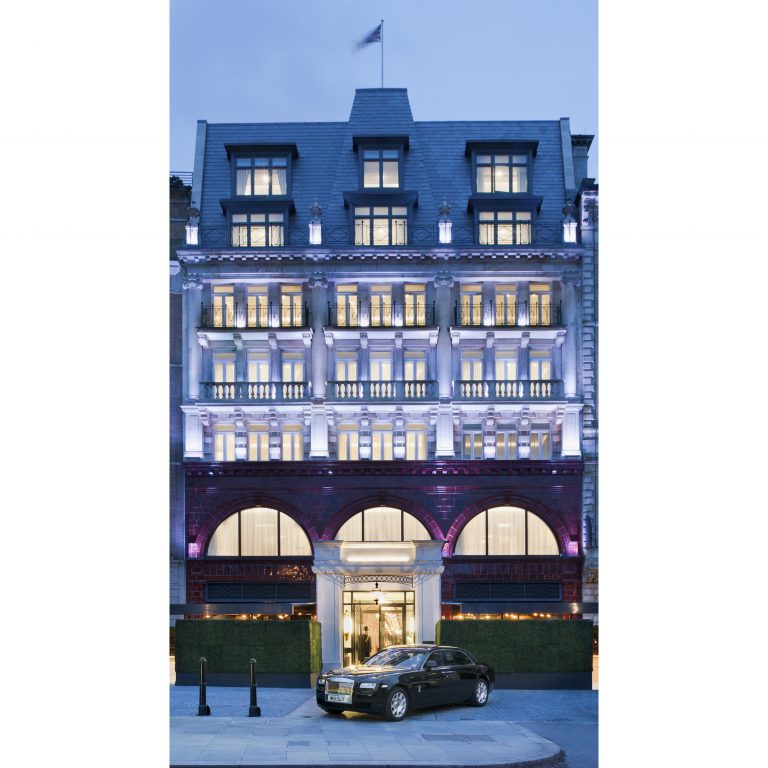 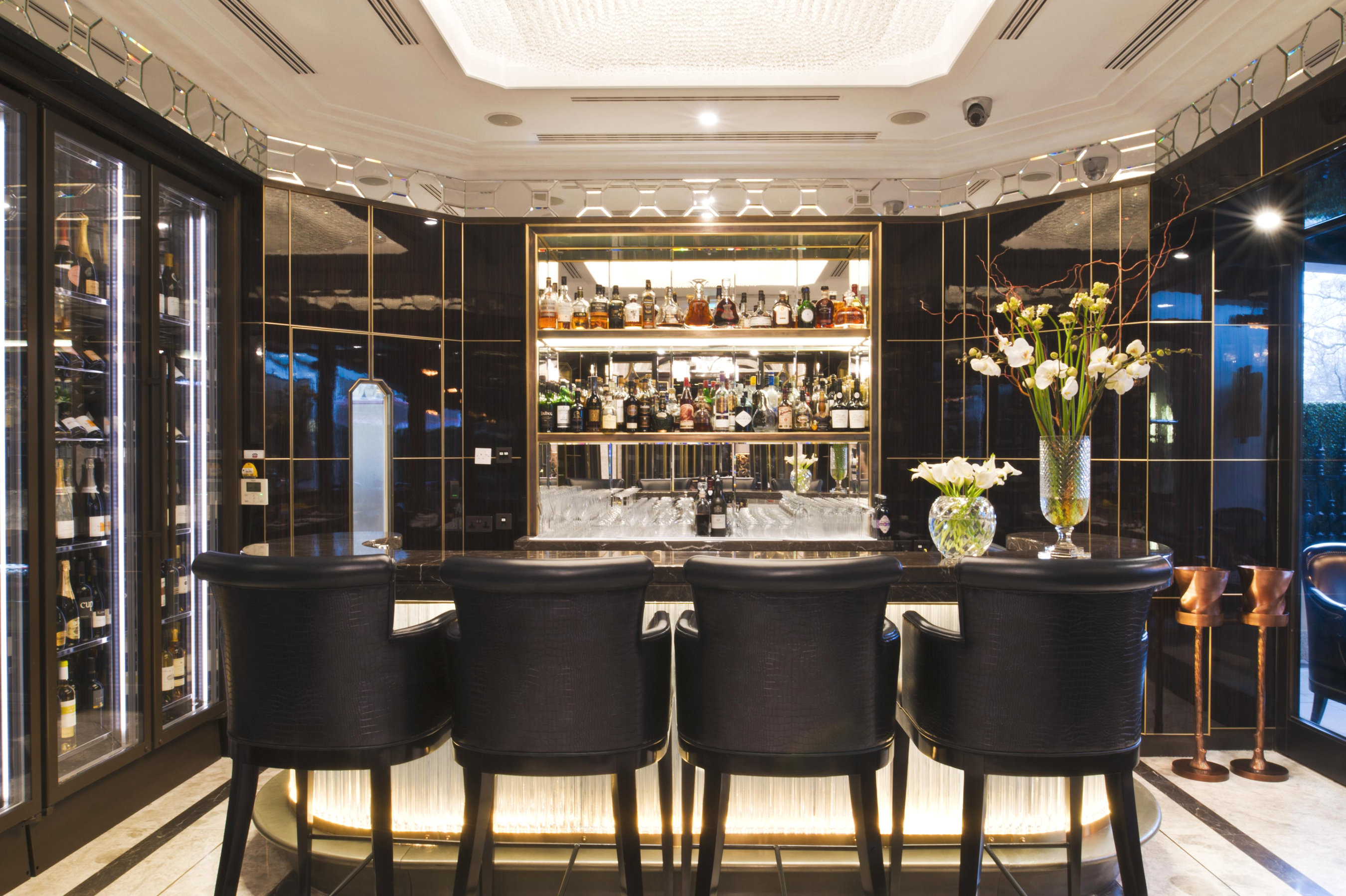 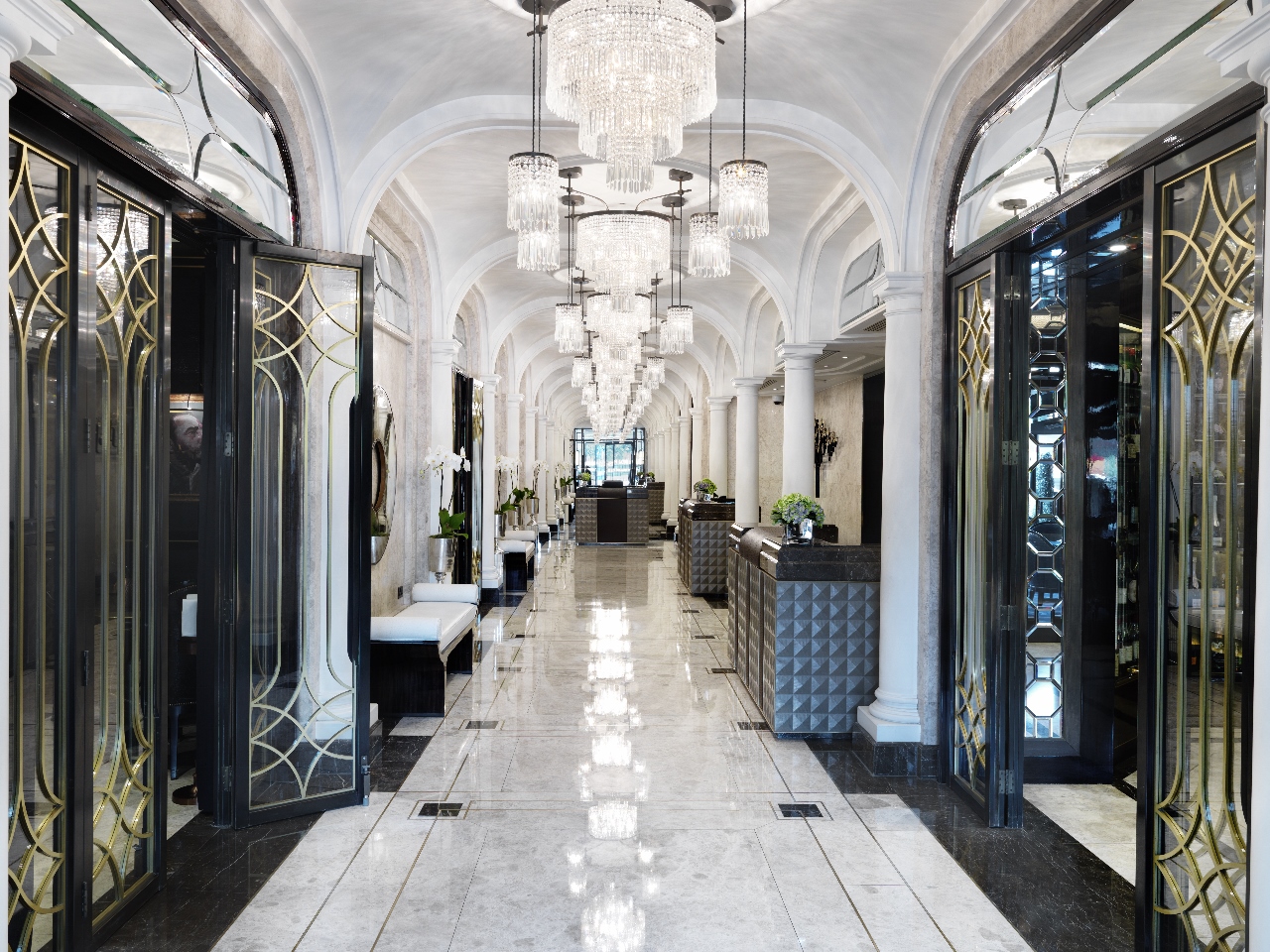 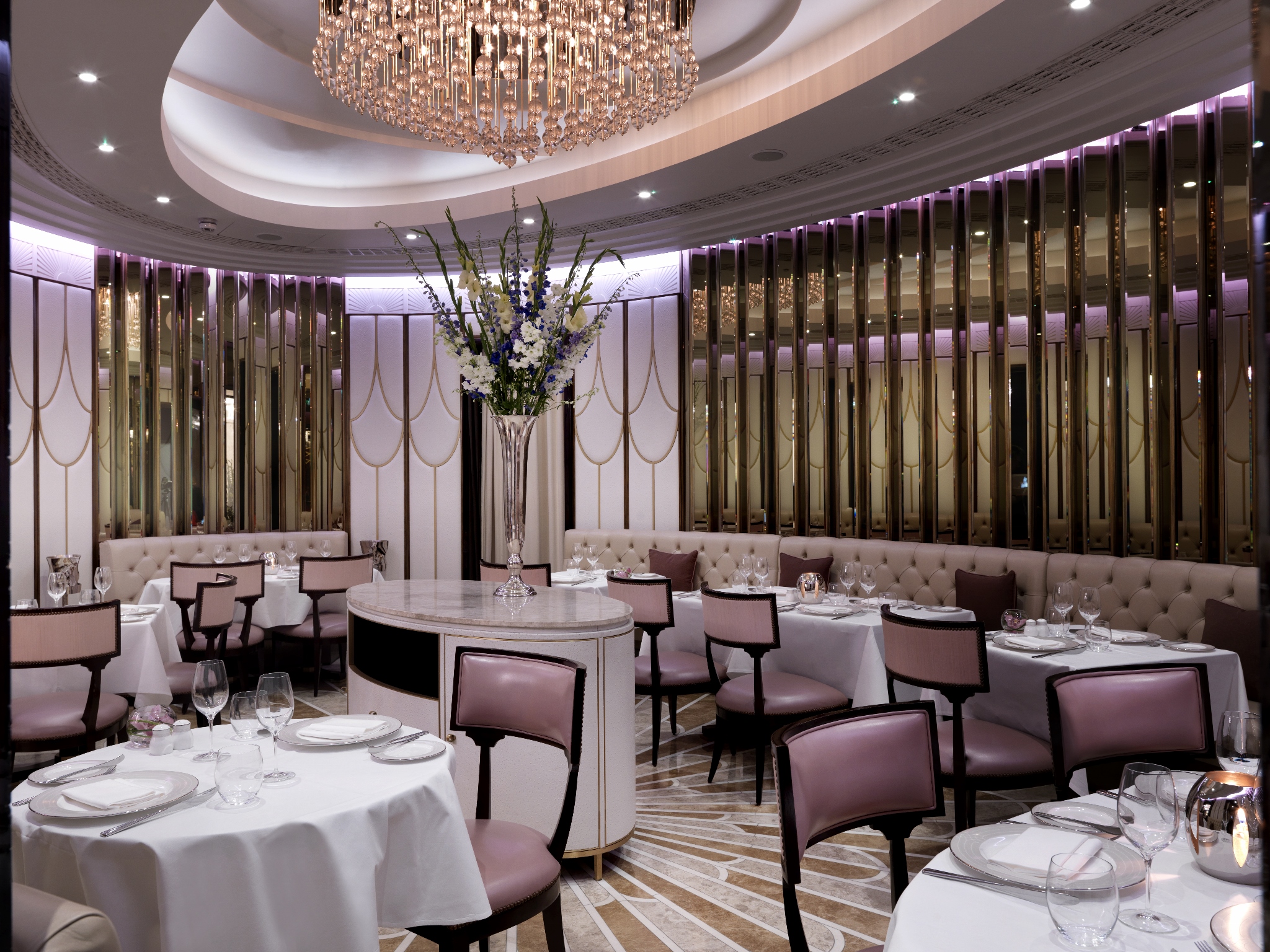 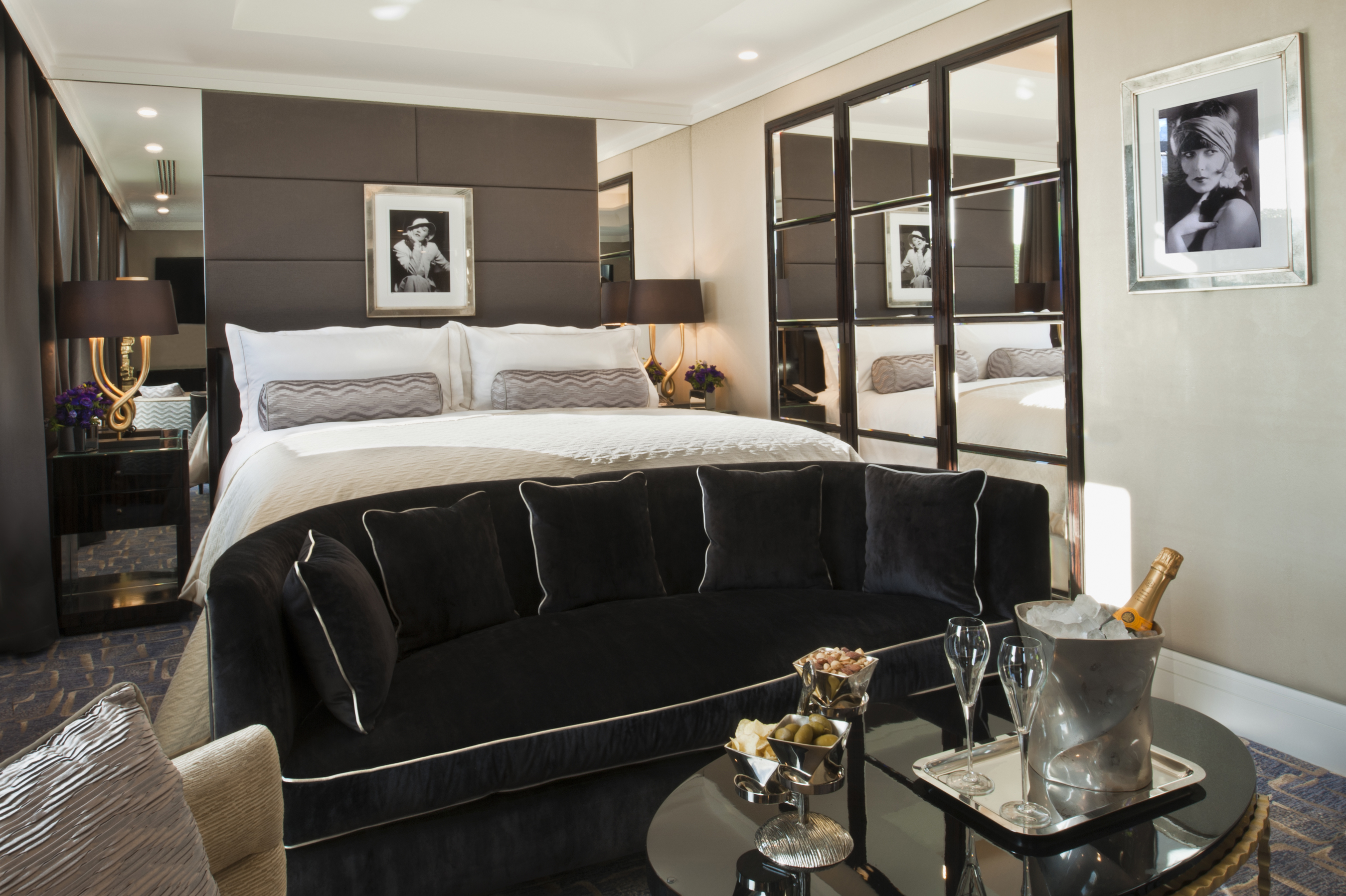 In hotel parlance, the words ‘five-star’ and ‘luxury’ have almost become clichés. Finding one that evokes the true meaning of elegance is rare, unless you’re staying at The Wellesley Knightsbridge. Rowena Marella-Daw finds out what sets this hotel apart.

Hyde Park and Park Lane are home to some of London’s finest hotels, and just a few strides from the Wellington Arch lies a hidden gem that is The Wellesley, Knightsbridge, which although small compared to its five-star neighbours, is big on style and glamour. Occupying a former 1920s townhouse, the hotel’s façade incorporates the old entrance to the Hyde Park Corner underground station and retains the original ‘ox-blood’ faience and arched first-floor windows designed by Leslie William Green, architect of several iconic London Underground stations of the early 20th century. Remaining loyal to the location’s legacy, The Wellesley is named after Sir Arthur Wellesley, first Duke of Wellington, who defeated Napoleon at Waterloo.

And speaking of victories, The Wellesley has been winning the hearts of discerning guests since opening its doors in December 2012. As soon as I walked into the marbled hallway, chandeliers and period details transported me to the fashionable days of the Roaring Twenties.

Immediately to the right is the Crystal Bar, possibly London’s smallest and most intimate hotel cocktail bar. The fact that it seats only four guests made it feel like a VIP lounge – and I got the bartender’s attention sooner than I could say “bottoms up”. Every inch of space speaks Art Deco – from bevelled mirrors, blue crystal chandeliers and leather high chairs to glossy ebony Macassar panels and lead crystal vases.

Last year the hotel commemorated its fifth anniversary with a menu dedicated to jazz legends of the 20s and 30s, and the 2019 cocktail choices are no less cool, raising a glass to flamboyant concoctions that flourished during the Prohibition era. These include the Brown Derby, named after the restaurant which opened in 1926 in Hollywood’s Wilshire Boulevard; Hemingway’s Daiquiri, the novelist’s favourite tipple; Blood and Sand, inspired by the 1922 film featuring Rudolph Valentino, plus other classics such as Side Car and Bee’s Knees. More traditionally, the Wellesley Martini is a modern adaptation of Winston Churchill’s favourite, combining unfiltered Belvedere vodka, home-made vermouth, pomelo twist and a cigar-shaped chocolate. A huge selection of whiskies, cognacs and armagnacs add to a heady selection.

The aroma wafting from the cigar room across the hall may not be to everyone’s liking, but the commanding portrait of Sir Winston Churchill enjoying his cigar beckoned me to take a closer look around the UK’s largest humidor. Textured leather armchairs work well with exquisite black and gold panels to create a decadent touch, and it’s down to resident cigar sommelier Giuseppe Ruo to keep the humidor well stocked with the best cigars from around the world. Occasionally, he will also guide guests on pairing rare cigars with spirits.

The spirit of a bygone era really comes to life at the Jazz Lounge, where weekend live jazz music entertains guests dining on classic Italian cuisine. Art Deco style interiors in dusty pink velvet drapes accented with Chanel-inspired crystal beads bring impeccable glamour and class to this intimate setting. The same level of sophistication extends to the Oval Restaurant, which as the name suggests, is an unusual oval-shaped room for 28 guests. A frosted pale pink, gold and black colour palette works harmoniously, reflected through tinted mirrors, but it was the starburst pattern on the marbled floor that caught my attention. Head Chef Sebastiano Cioffi brings a contemporary flair to traditional Italian dishes, whether it’s a succulent medallion of pork or lamb, a pyramid shaped tortellini, or a refreshing gelato. Attention to detail means even the plates and cutlery are embellished with period details. Those not ready to face the world during breakfast, this is the right sanctuary.

The corridors leading to the rooms are graced with photos of Hollywood icons. There are only 36 rooms, six of which are suites, named after references to the era, and mine was the Charleston Suite, totally appropriate for someone who loves to dance. Had I known ahead of time, I might have arrived wearing a flapper dress. Although small in comparison to your average hotel suite, intimate proportions mean they can indulge each room with sumptuous details that would have won approval from Gretta Garbo or Bette Davis. The half-moon shaped ochre velour sofa hints of lush gold, while black lacquer and frosted glass doors manifest the elegance of the era. Decadence pours onto the bathroom, lavished with Italian Carrara marble, chrome fittings, Hermès toiletries and fluffy bathrobes. I wasn’t able to avail of the 24-hour butler service, but certainly enjoyed being driven in the hotel’s own chauffeured limousine.

Competition is tough in the hospitality business, and the pressure to be the best amongst London’s multitude of luxury hotels has never been greater. Impeccable service is paramount, but it’s also about inspiring guests and giving them a memorable personal experience. The Wellesley revives the glamour and sophistication of the Jazz Age while also capturing the daring spirit of that era. This is indeed one class act.

Find out more about The Wellesley Knightsbridge, a Luxury Collection Hotel here | www.marriott.co.uk