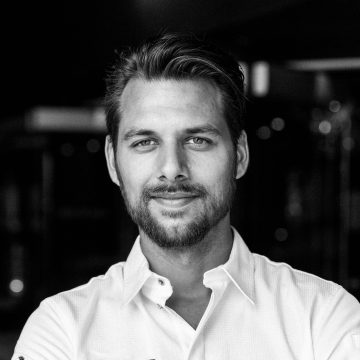 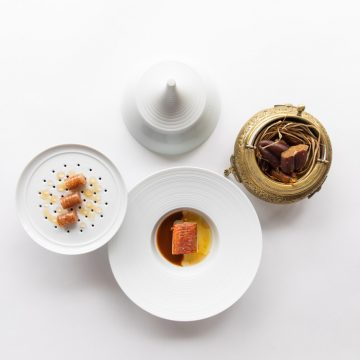 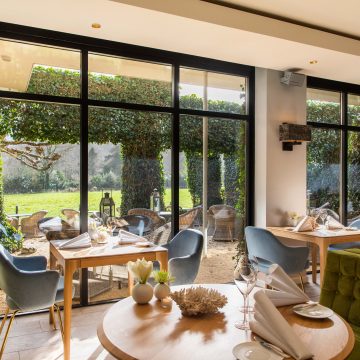 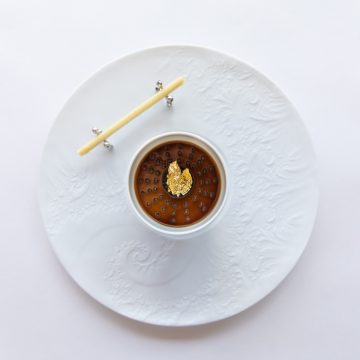 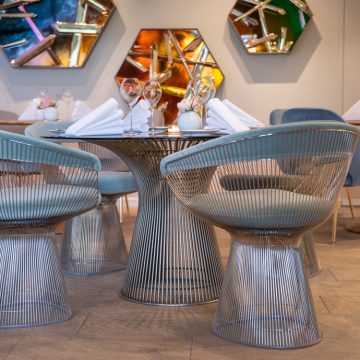 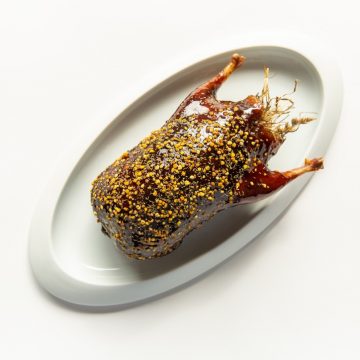 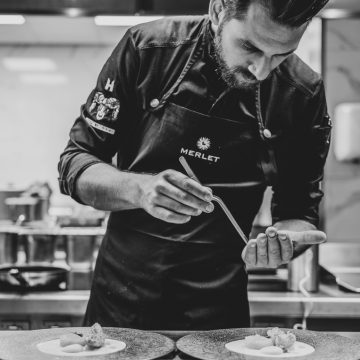 A skilled and highly successful chef today, Jonathan Zandbergen had not always seen being a chef as his career when he was younger. At the age of fourteen, he got a job through his stepfather behind the bar in a busy restaurant at the Oudegracht in Utrecht – this was his first taste of the hospitality industry. After that, he tried a few other jobs before ending up in the kitchen.

Zandbergen explains, “Fourteen years ago, I started working at Het Polman’s Huis, a well-regarded brasserie in Utrecht, where classic cooking was done. When I heard that my girlfriend was pregnant, I had to make a choice. At that time, I also made music and sometimes also organized parties, but I did not see a secure future at that time; I wanted to have a future.” Cooking was his choice, and this led him to attend cooking school.  Jonathan chose to attend the chef’s academy in Nieuwegein: The Gildevaart. This was the moment he decided that his life goal was to one day join the leagues of the world’s top chefs.

Books were a great source of inspiration for Zandbergen: “I was fascinated by the book by Escoffier, the book about Restaurant Parkheuvel by Cees Helder from 2003 and the television series by Alain Ducasse (Working at the top chef) from 2005, in which his three-star restaurant Plaza Athénée was central. I also bought his French edition of the Grand Livre de Cuisine, which I still look at; it is a Bible for me. These are the chefs who inspired me the most. The beautiful, ‘rich’ kitchens in which real food is prepared, food with taste: the classic French cuisine.”

After graduating from the chef’s academy, Jonathan went on to study for a further six years, doing various courses which enabled him to become the best cook he could be. After obtaining his Diploma for management as a gourmet entrepreneur from Cees Helder Academy, he completed several short internships at various Michelin-starred restaurants, including 3 Michelin-starred De Librije.

Soon thereafter, Jonathan became a sous chef and then a chef in Het Polmans Huis, where he was able to hone skills in various disciplines in the hospitality industry. The Polmans House had a restaurant, two banqueting halls, a café, the Ottone church (external location for banqueting) and De Zuylenspiegel (external location) with a total turnover of 2 million euro. This was a challenging environment, but one which Zandbergen thrived in.

Through his culinary experience, Johnathan’s cooking style has developed and transformed over the years. From a heavy classical cooking base, he has now incorporated a variety of different techniques into his repertoire, including the texturas (period elBulli), use of liquid nitrogen and other modern techniques.

“My food was always high on taste and recognizable, pure. Nowadays I describe my style as contemporary French, local products, international flavors. My dishes always are pure and in some way familiar, must be visually appealing and offer a mouth full of flavor! And I tell stories.”

Prior to Restaurant Hotel Merlet, Jonathan worked as the Executive Chef at Restaurant Het Veerhuys in Almere from 2011 to 2015. The restaurant underwent much positive transformation under Zandbergen’s leadership, such as being listed as no. 80 in the restaurant guide Lekker 500 as well as the chef himself being mentioned several times in publications regarding his talent and promise in the industry.

In July 2015, Jonathan started as Restaurant Hotel Merlet’s Executive Chef.  A restaurant which had already for many years been competing at the top of the culinary industry, Jonathan managed to successfully continue on the restaurant’s excellent reputation, and maintain its Michelin-starred stature.

“It really is like a train at Merlet, although it requires 200% focus and a lot of effort. To stay on top, you must keep developing and constantly improving. The pressure is high and I work 90 hours a week to manage everything. In the meantime, I have managed to build a new team of 15 chefs, spread over two restaurants (Merlet and Grand Café Bourgonje). Working for top quality together – something you can always count on!”

Jonathan is passionate about leadership in the kitchen, he explains: “What I notice as a relatively young chef is that I have a lot of connection with the youth. I love to inspire people and to make young cooks enthusiastic about our beautiful profession! I have been working with students for a long time and I have been able to learn what is important in an employer / employee relationship. Every person is unique and needs a different approach. By maintaining close contact with my employees and having a 1-to-1 conversation every month, I know for example if and what is going on in private life, where he / she stands in his own development and where he wants to go. This way we can plan together in which I can coach and help to keep the focus in its development. He also knows what I and the organization expect from him and we keep each other on point.”

“I’m nowhere without my team. We do it with all of us and bear our own responsibility. Everyone at his own level, but all equally important. I’m on top of that, even if it’s good! Their share contributes to the experience of the guest and the reputation of Merlet. A nice example is that the boys in the kitchen have as much passion and enthusiasm as I and now participate in various cooking competitions.”

On 7 November 2016, Zandbergen was voted the most talented chef 2017 by the Gault&Millau restaurant guide. The Hotel Merlet kitchen has been rated with 16.5 / 20 points under his helm. In the restaurant guide, Lekker 500, Restuarant Hotel Merlet holds the no. 45 spot in the top 100.

Alongside his various awards, Jonathan has also competed in various competitions. The most special competition for him has been The Prix Culinaire Le Taittinger International where he won first prize. Created by the son of Pierre Taittinger to give young talented chefs a platform and to honor the classic French cuisine, Zandbergen was able to out-cook his competitors and won the final in Paris – the fourth Dutchman in 51 years to win this achievement.

In 2014, Zandbergen started his own company called The Soul Kitchen. The focus of his company is to provide advice and ambassadorships to other culinary minds. Additionally that year, Jonathan also developed a website in which he shares culinary inspiration, he explains: “I believe in sharing. That is, as far as I am concerned, the new business. By working together, you become stronger and better. In addition, I want to enthuse people for real food made from real products. Products with a story. All this I share through videos and photos.”

The chef’s love for Dutch products and Dutch gastronomy is translated through his cuisine. His open attitude has led to collaborations in various fields, including companies such as Jl. Coquet Porcelaine and Jaune De Chrome, ANNADutch Caviar, OriginalBeans Chocolate, Kai-Shun knives, Taittinger Champagne and LeNouveauChef chef’s clothing.

“I am also proud of our Dutch products. Very proud! So, I caught myself there recently when I was in Paris, that I was proclaiming that our sea bass is the best available. And how about the North Sea crab or the flatfish or the Oosterschelde lobster or the asparagus, local hare or …. so, I can go on. And that’s what I really think! In recent years, I have been looking for local products without sacrificing quality. In addition, I have discovered several great products from our own soil. Products that I like and use a lot in my kitchen. With equal pride, I tell my guests the stories of these products. That is how I developed my unique version of storytelling cuisine, in which I always take the guest in a special story about the product or a preparation with a piece of history and the connection I have got with it myself.”

Artisanal and handcrafted work of real people and nature.

My family, my music, some Japanese knives and a boat I think!