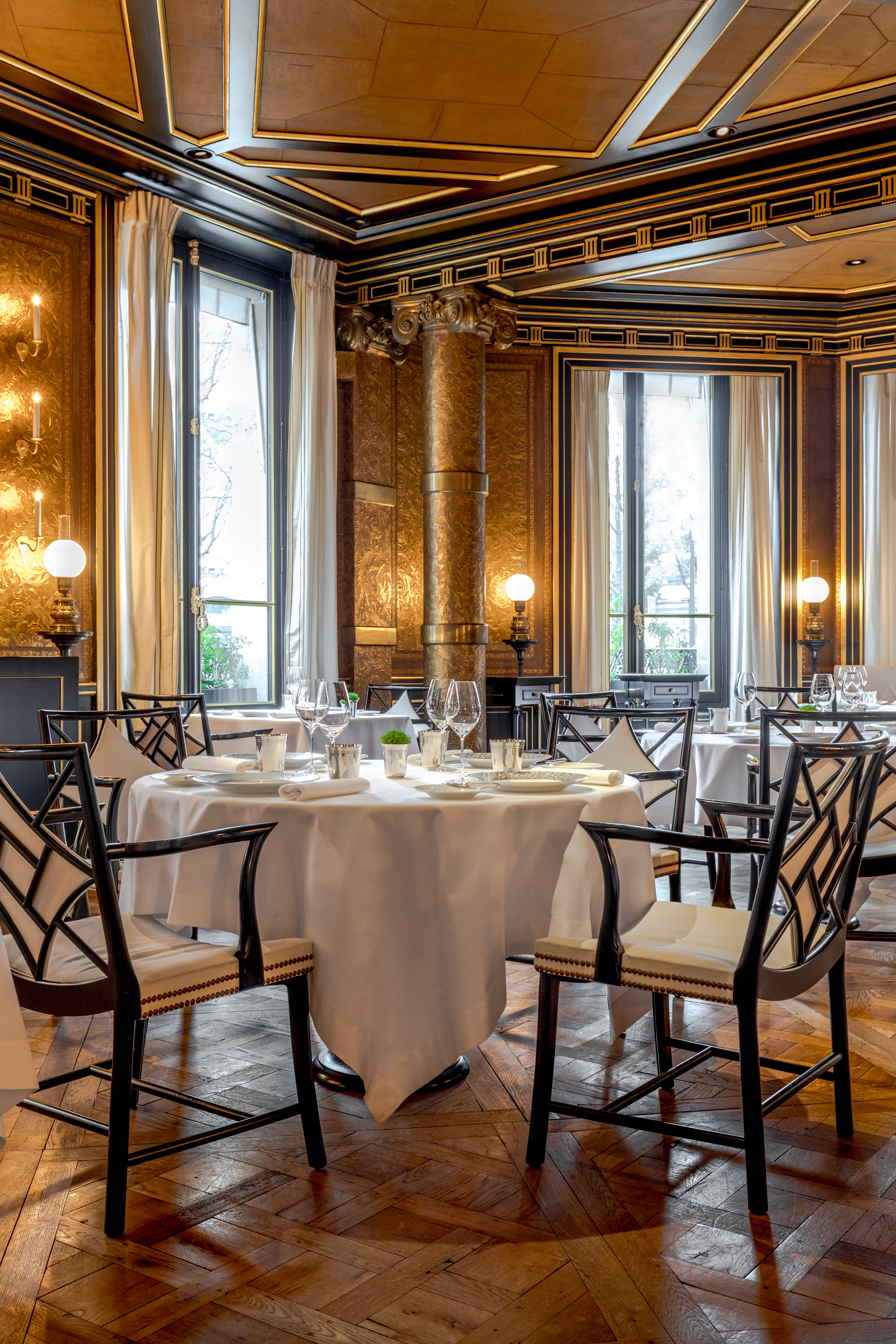 In the heart of Paris’ 8th arrondissement, chef Jérôme Banctel helms the kitchen of the elegant Le Gabriel at the spectacular La Réserve Hotel. Inspired by ingredients and their unique versatility, Banctel harnesses their flavors using refined cooking techniques to create sophisticated dishes more than worthy of their 2 Michelin-star stature.

After being born in Rennes, France, Jérôme Banctel’s family moved to Piré-sur-Seiche in Breton Brittany, and this is where he spent his childhood years. At the age of 16, Banctel enrolled at Notre Dame de Saint-Méen-le-Grand hotel school, and spent four years studying the culinary arts.

After graduation, Banctel’s gastronomic career began with Michel Kerever’s team at the Duc d’Enghien, in Val d’Oise, followed by a stint at the Vreugt en Rust restaurant in the Netherlands. After completing his military service, Jérôme Banctel moved to Paris in 1993, where he spent eight months at the Jules Verne with Monsieur Reix before joining the kitchen team at Les Ambassadeurs, a gourmet restaurant at the Hôtel de Crillon, reporting first to Christian Constant and subsequently to Dominique Bouchet.

Upon leaving Hôtel de Crillon, Jérôme joined the team at L’Ambroisie, a prestigious restaurant at the Place des Vosges, and a whole new chapter in his culinary career began. He spent eight years as Sous-Chef here, working alongside Bernard Pacaud, learning about the importance of thoroughness in the kitchen and developing a deep respect for fine produce.

In 2006,  Jérôme’s early career hit its highest point when he was asked by Alain Senderens to be the head chef of his restaurant at the Place de la Madeleine. Previously named Lucas Carton, the Senderens had kept the historic Art Nouveau setting designed by Majorelle while relinquishing its three stars in favor of more contemporary, streamlined and creative cuisine, with lighter bills and more relaxed service. In doing so, the restaurant revolutionized gastronomy, making its mark in culinary history.

Working with this highly-talented, three-starred chef greatly contributed to Jérôme Banctel’s culinary development. Banctel adopted the renowned chef’s culinary philosophy: start with the finished product (wine) and from here, determine the best possible pairing between the wine and the food. The concept of pairing wine and food offered a whole new perspective on gastronomy, which Banctel became invested in.

In turn, Banctel also impacted Senderen’s culinary approach, introducing him to a cooking style focused on respecting produce to the greatest possible extent. This revelation led Senderen to modify some of his signature recipes such as the Apicius duck. Additionally, Banctel’s influence brought upon dishes with more Asian-inspired flavors.

In 2012, Senderens and Banctel wrote a recipe book together, providing a true account of their mutual understanding. Another expression of their excellent teamwork was the opening of the Mama Shelter hotel and restaurant chain, for which Jérome was to serve as the chief consultant with Alain as his coach.

Unfortunately, however, this story came to an abrupt end in 2013 when the young chef departed Place de la Madeleine, and Senderens Restaurant underwent a change of ownership, being taken over by Potel et Chabot and rechristened with its original name: Lucas Carton. A page in the history of gastronomy, and in Jérôme’s culinary journey, had turned…

At the beginning of 2015, Jérôme Banctel found himself preparing to take on a new challenge. Michel Reybier, owner of La Réserve in Ramatuelle and Geneva, had funded the acquisition of the Résidence Maxim’s in Paris. This was one of the great innovations in 2015: the opening of a five-star hotel opposite “Laurent”, the famous establishment at the lower end of the Champs-Elysées. And it was Jérôme Banctel whom he asked to head up the kitchens of Le Gabriel, the gourmet restaurant of his Parisian Réserve. Passion and discipline are unquestionably at the root of this 47-year old chef’s success.

A year after taking control of the kitchen at Le Gabriel, The Michelin Guide France awarded the establishment with the coveted 2 Michelin stars, a true show of recognition for Banctel’s outstanding culinary prowess.

The restaurant “Ultraviolet” in Shanghai by Paul Pairet

My wife, my children, un knife and a cookery book