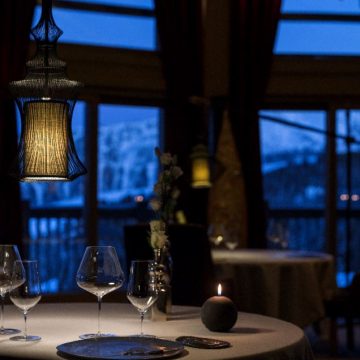 French Chef, Jean-Rémi Caillon, helms the kitchen of 2 Michelin-starred Le Kintessence at Le K2 Palace in Courchevel. Using the alps as inspiration and the product as guidance, Caillon creates elegant dishes defined by their balance, subtlety, and precision of flavor.

Introduced into the culinary world at the young age of 14, Jean-Rémi Caillon didn’t hesitate when he was offered the opportunity to study hospitality. Dedicated to his craft, Caillon worked in restaurants across his native region in France, near the city of Roanne, while honing his skills at culinary school.

At the age of 19, Caillon worked in a Michelin-starred kitchen for the first time, at a restaurant in Juan-les-pins. It was here where his vision of cooking was revolutionized – the teamwork, the strictness and the requirement needed to achieve a perfect cooking, optimum seasoning and plating pushed him to be the best chef he could be. This was a moment of revelation for the chef – almost as if he was struck by lightning – and from here on out, the fire of the kitchen wouldn’t stop burning in his heart.

The chef continued on his star-studded path to the banks of the Léman lake, first in Divonne, then in Crissier. Behind his stoves, Jean-Rémi met a brilliant Japanese chef who introduced him to her fascinating culture. In the years following, Caillon began traveling to the Land of the Rising Sun, discovering and falling in love with another form gastronomy, its new flavors and different cooking techniques.

Thereafter, the chef went on to work under Philippe Labbe in Eze and Paris for four years. The chef was amazed by the variety of fresh products he could work with along with the seasons: meat, venison, giblets, poultry, rockfish, line-caught fish, crustaceans, shells, fruits and locally-grown vegetables…An incredible diversity of quality products that allowed him to enhance his already impressive cuisine and cooking techniques.

After an initial collaboration in Courchevel in 2009, Jean-Rémi was offered the opportunity to return for the grand opening of the Le K2 Palace in 2011, where he became Executive Chef in 2015. The environment here is incredibly fulfilling for the chef. In addition to the stunning natural and wild resources, the region is known to be a pool of passionate artisans eager to maintain sustainable production. The Mountain, his true source of inspiration, gives him all the means to put his skills and experience to good use.

Whatever the restaurant… It is essential for me is to share the meal with guests I appreciate.