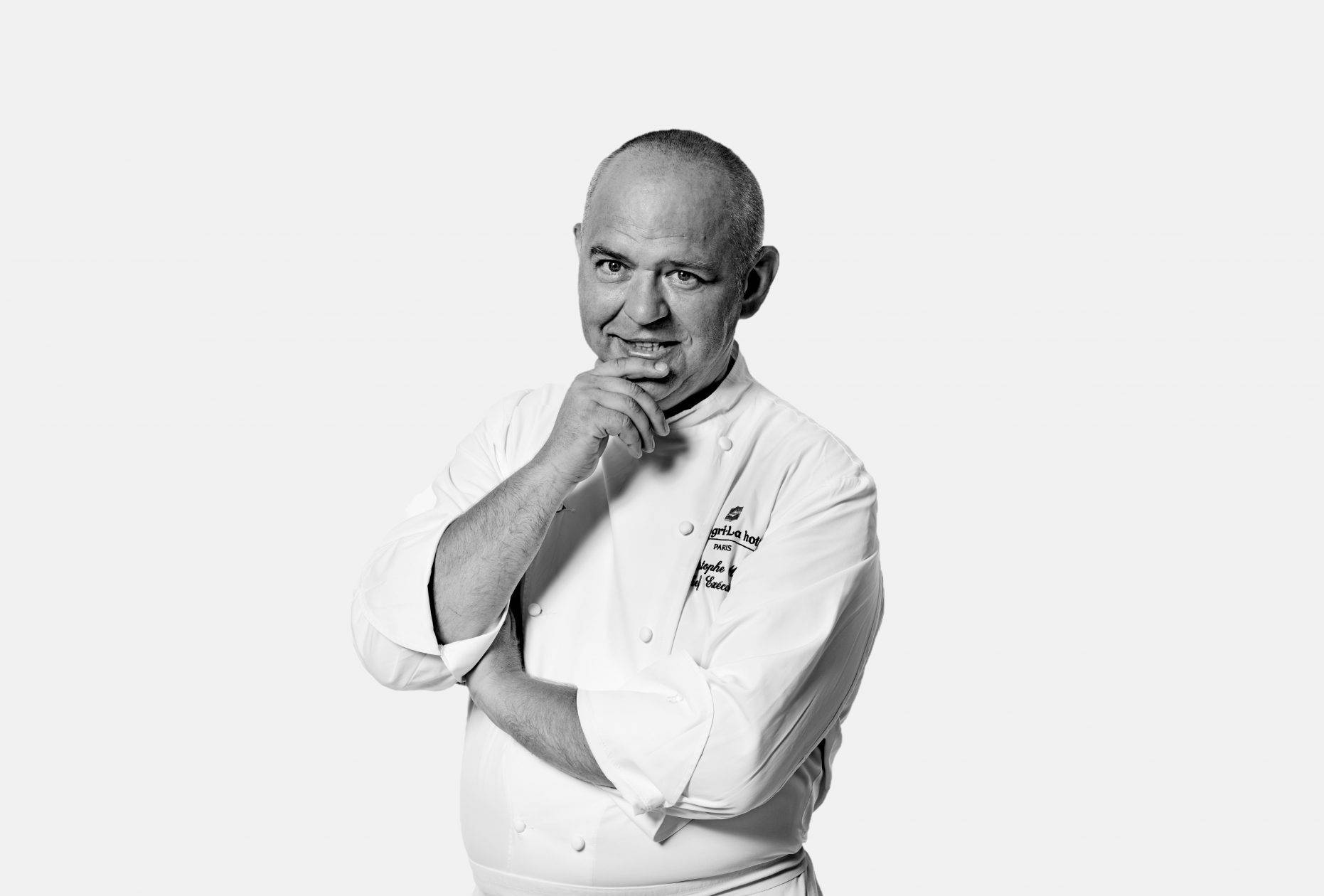 Executive Chef of the Shangri-La Hotel, Paris, Christophe Moret uses his passion for fresh produce to guide his cooking at the renowned hotel. Armed with fierce determination and an impressive skill set to match, Moret has earned gourmet restaurant L’Abeille 2 Michelin Stars under his guidance.

Christophe’s love for vibrant vegetables stems from his youth, as he recalls fond memories of eating flavor-filled greens fresh from his grandparents’ garden. As market gardeners, his grandmother and grandfather nurtured his appreciation for the power of produce, and this laid the foundation for his path into the culinary industry.

Moret learnt how to cook at a young age, thinking of ways he could honor the freshly picked peas, beans and spring delights from the garden. Wednesdays spent perfecting pastries naturally evolved into enrolling at a secondary catering school in Blois, followed by apprenticeships in Michelin-starred establishments in Gien and the Gaut-Rhin after graduation.

In 1988, as a young chef, Christopher went on a discovery though the South of France, which he admits was a revelation for his cooking career, “I had the good fortune to work with three amazing Chefs: Bruno Cirino, Jacques Maximin and, of course, Alain Ducasse. At the Grand Hotel in Saint-Jean-de-Luz, Bruno Cirino would go the market every day in the Spanish Basque country and bring back live fish. Sometimes, we would have a sea bass swimming among the lobsters in the restaurant’s tank.”

It was Moret’s work alongside master chef Jacques Maximin at Château Eza as Chef de Partie that taught him the importance of organisation and presentation, and how to effectively be a part of a 25-strong brigade.  However, his dreams were truly realized when he was offered a job as part of Alain Ducasse’s team at Le Louis XV in 1990, which had just won its third Michelin star. A turning point in his career, and the beginning of a long collaboration with the culinary genius, Moret mastered precision, technique and perfection of movement in Ducasse’s kitchen.

After leaving Le Louis XV with a curious and open mind, Christophe went to work at Le Royal Monceau and the 59 Poincaré as sous-Chef before being offered the position of Head Chef of Spoon Food & Wine in Paris in 1998. Here, he was challenged to create harmonious worldwide flavors – such as producing the perfect Balinese satay or authentic Tandoori Chicken Wings – at which he excelled, bringing an innovative, multi-ethic cuisine sensation to the heart of Paris.

Five years later, the Chef was called back to Alain Ducasse’s side, taking charge of his three-Michelin-starred restaurant at  Plaza Athénée. Moret says that, “This was a great honor, like being made the guardian of a temple, and I had to make sure that I kept the three stars.”

After seven years at Alain Ducasse’s Restaurant, Christophe took his creativity and talent to the two-Michelin-starred Parisian institution, Lasserre, where he injected a fresh new spirit. In 2015, the Chef was offered the role of Executive Chef at Shangri-La Hotel, Paris, a challenge he accepted with vigor as he could now put his extensive experience and excellent knowledge into practice.

“Becoming Executive Chef at Shangri-La Hotel, Paris was the opportunity for me to join the group Shangri-La Hotels and Resorts – first luxury hospitality group of Pacific Asia – and to put my competencies to the service of its Parisian Palace. I am happy to be at the head of the three restaurants – L’Abeille, two Michelin stars, Shang Palace, one star and La Bauhinia – as well as to be supervising all the culinary offer for the hotel. I would like to make Shangri-La Hotel, Paris shine on the Parisian and international gastronomic scene, while giving our guests a unique experience in our restaurants,” says the Chef.

Over and above helming the kitchens of two-Michelin-starred L’Abeille; the only Michelin-starred Cantonese restaurant in France, Shang Palace; and La Bauhinia, a restaurant serving both French and South-East Asian cuisines, Chef Moret also orchestrates all the hotel’s auxiliary culinary offerings, from the menus for the meeting rooms to the room service menu.

Blue Hill in New-York, they cook everything on site, using their own products, which is a very interesting approach for me.

Something to make fire, 1 knife, 1 iron cocotte and some music…