Michelin star chef Heinz Beck of The Lanesborough’s celebrated restaurant Apsleys shares the recipe for his signature dish on the menu, Fagottelli Carbonara, in light of the luxury five star hotel’s announcement that it will be closing for refurbishments in December

Earlier this month, London’s luxury fivestar hotel, The Lanesborough, announced it will be closing in December for a renovation, and with it, Heinz Beck’s Michelin starred restaurant, Apsleys.

To mark the end of what has been an illustrious era for the celebrated Hyde Park hotel, Michelin starred chef Heinz Beck has shared a recipe for one of his signature dishes which features on the menu at Apsleys, Fagottelli Carbonara, featured below.

While the recipe below should appease any Apsleys withdrawal symptoms for those who frequent the restaurant throughout The Lanesborough’s closure, guests can rest assured that the hotel’s renovation has a short turnover of just a year (think back for a moment to the Rijksmuseum’s 10-year refurbishment) and will see the hotel’s 93 rooms, restaurant Apsleys and all of its additional public areas reopening their doors at the end of 2014.

The new interior is one of the late Alberto Pinto’s last projects, who, after finishing the plans for The Lanesborough last year, sadly passed away. Renowned Paris-based designer Alberto set the standard for ‘Haute Interior Design’, and his signature ‘savoir faire’ has become synonymous with some of the world’s most spectacular interiors, including the Oceanco’s Yacht Y708and the Seaside Hotel Palm Beach, in Maspalomas. Fans of Alberto’s work will see his legacy live on at the newly renovated Hyde Park hotel which is slated to reopen its doors to the public later in 2014. The renovations will also pay homage to the building’s architectural heritage as one of London’s most revered Regency landmarks.

While Geoffrey Gelardi, Managing Director of The Lanesborough says he, and the team at The Lanesborough, ‘look forward to unveiling a new era for The Lanesborough,” those wanting to hold on to a piece of its past, The Lanesborough will be auctioning all its existing furnishings and artefacts between the 9 and 13December 2013 at the hotel. For more information visit www.thelanesboroughsale.com.

1kg bones and trimmings of veal

Beat the yolks in a double boiler and add little by little the
grated Pecorino cheese to eggs.

Add the white pepper, the salt, let cool and incorporate the
whipped cream.

Put the mixture into a sac-a-poche (pastry bag)

and keep cool in a refrigerator for 1 hour.

Mix the flour with the semolina, add the egg yolks (keep 1 egg whiteaside), one egg, a pinch of salt and enough water to obtain a solid dough.

Work the dough for a long time and form a ball. Wrap it in plasticwrap and cool it in the refrigerator for 1 hour.

Roll out the dough thinly and cut into 7cm squares with the helpof a square mould.

With the help of a spoon, spread the filling over the dough andclose it in the shape of a cigarette.

Press the dough with fingers, fold and cut out the “Fagottelli”with a toothed wheel.

For the veal stock

Cut the trimmings of veal into small pieces. Break the bones andput everything in a pan that can go in the oven with a little of extra virgin olive oil.

Put in the oven at 190°C and brown until the bones and trimmingsbecome gold in colour. Remove from oven, drain the excess oil, add the vegetables(previously cleaned and chopped) the rosemary, the shells of white pepper andcontinue to cook for a few minutes.

Remove from the heat and cool.

Cover the bones and the trimmings of veal with cold water andbring to a boil.

Cook for about 2 hours on a low heat.

While cooking, skim the top of the stock to remove the impurities thatrise to the surface. Pass the veal stock through a clean cloth or over a finestrainer.

Cut the Roman bacon into julienne strips, dice zucchini and skipall in a pan with a little Extra virgin olive oil.

Pour in a litte white wine, bring it to a boil and add the vealstock.

Grand Chef Relais & Châteaux Heinz Hanner’s culinary philosophy lies in following traditional flavours and combining them with modern techniques and fresh ingredients. His 2 Michelin star restaurant, Hanner Leger is a manifestation of his extensive experience and incomparible skill. Growing up withinthe restaurant industry, with restauranteur and hotelier parents, becoming a chef was a 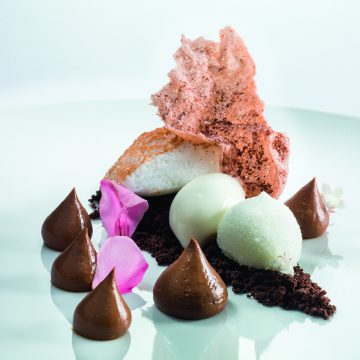 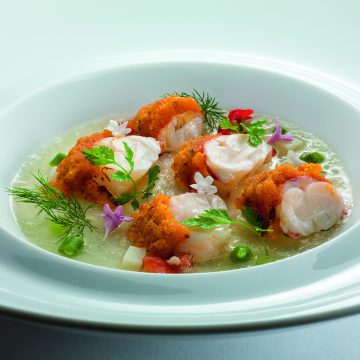 A Recipe by Heinz Beck

A beautiful recipe for lobster gratinated with slightly spicy patanegra on cold gazpacho of celery & green tomatoes, as seen in FOUR’s International Edition… 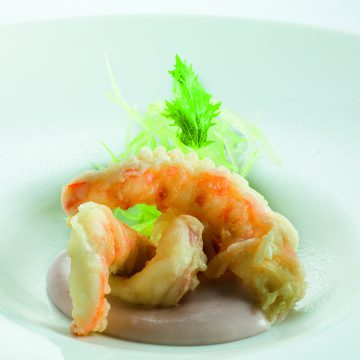 A Recipe by Heinz Beck

Three Michelin-starred chef, Heinz Beck gives you a recipe for king prawns in tempura on purée of fried squids, as seen in FOUR’s International Edition…